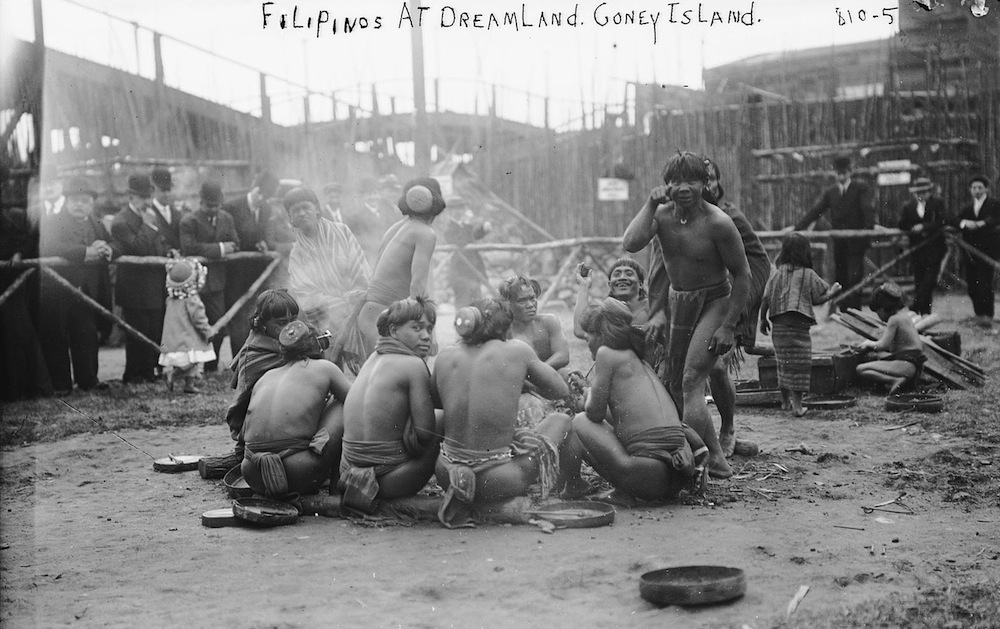 A day trip to Coney Island, once the largest amusement park in the United States, led me to the photograph. In the black-and-white image, a group of tribesmen, women, and children squats around a campfire. They’re barefoot and dressed in G-strings and tribal blankets. Several are looking at the camera and laughing. One man is pointing. Another is holding up a rock, as if he is about to throw it.

The photo could have been torn straight from the pages of an ethnological journal, except for one detail: a group of men in suits and derby hats stand watching from behind a low wooden fence.

Who were these tribespeople? Why had they been brought to America? What had become of them? That chance discovery turned into a full-blown obsession that took over more than three years of my life. There was something about the faces of the men, women, and children in the photograph, and their vitality, which drew me in. I couldn’t stop thinking about them. The idea that human beings had been exhibited a few miles from downtown Manhattan horrified and fascinated me; I needed to know more.

I discovered that in 1905 an American showman named Truman Hunt persuaded 50 members of the Bontoc Igorrote tribe to leave their homes in the far north of the Philippines and travel with him to America. He took them to Coney Island and instructed them to put on a “tribal show.” In return, he promised to pay them $15 each a month.

The Igorrotes, as they were known, became the hit of the summer season. They were written about in newspapers coast to coast, and inspired poems, newspaper cartoons, children’s puzzles, and advertising jingles selling everything from soap to cooking oil. They were visited by millions of ordinary Americans, along with famous singers and actors, anthropologists, and even President Theodore Roosevelt’s daughter, Alice.

In newspaper reports, the Igorrotes were portrayed as either guileless innocents or vicious savages. The press wrote at length about the Igorrotes’ lack of clothes and described the tribe’s views on sexuality, notably the fact that they customarily had sexual relations before marriage and treated pre-marital pregnancy as a blessing rather than a disgrace. Elsewhere the tribespeople were invoked in articles about hard work and the simple life versus the complexities of modern living.

The Igorrotes weren’t the only people brought from distant lands to join the curiosities at Coney Island’s “freak show” in 1905. There were Eskimos, Somalis, and Irish farmers, too. But the Filipinos were by far the most popular, perhaps because of their perceived exoticism. The tribespeople’s bodies were covered in tattoos; they ate dog; and at home in the Philippines, they hunted the heads of their enemies.

At Coney Island, the tribe’s customs were distorted and shorn of meaning. In the Philippines, they ate dog on special occasions like weddings and funerals. But the dog feasts were so popular with the Coney crowds that their manager, Hunt, brought the tribespeople dogs from the New York City pound to eat every day. Hunt instructed the Igorrotes to build a head hunters’ watch tower inside their mock tribal village and took every opportunity to tell reporters about this particular bloodthirsty aspect of their customs.

Though exhibiting people in this manner seems abhorrent to us today, human zoos were nothing new in 1905. Nor were they an exclusively American phenomenon. For more than 400 years, “exotic” humans from faraway territories had been paraded in front of royal courts and wealthy patrons and at world’s fairs and expositions in England, the Netherlands, Belgium, France, Germany, and Japan. Human zoos reached their peak in popularity during the age of imperialism as governments sought to gain popular support for their expansionist policies, and the public flocked to see their country’s new subjects up close. Far from being shameful hole-in-the-wall entertainment, people took their families to see human zoos, much as they would go to the movies today. In early-20th-century America, people were addicted to novelty and sensation, which provided a welcome escape from the daily grind.

Not only were the Igorrotes put on display at Coney Island to entertain people, they were also used to push the argument that America had a duty to protect, educate, and civilize “innocents” like them. Later, when the Igorrotes’ manager became embroiled in a national scandal, they were used to argue that America had no place in the Philippines at all.

The Igorrotes made Hunt a fortune in the summer of 1905, but the showman was spending the money as fast as they could earn it. Word reached the U.S. government that Hunt was mistreating the Igorrotes and withholding their wages. Fearing a scandal at a time when America’s presence in the Philippines was drawing criticism both abroad and at home, the government sent an agent to investigate. Hunt received a tip-off that the man was coming and took the tribespeople on the run, pursued by creditors, ex-wives, and Pinkerton detectives in addition to the government agent.

What surprised and intrigued me as I pieced this story together from declassified government documents, private and official correspondence, vital records, court transcripts, and thousands of newspaper articles, was that, 100 years after they first thrilled and scandalized America, the Igorrotes had been forgotten. They had simply disappeared from the public consciousness.

Why had America forgotten them? After thinking long and hard about this and discussing it with a wide range of people—scholars and anthropologists, Americans and Filipinos, including people descended from the Igorrotes—I believe there are two main reasons. First, popular culture is by nature ephemeral, and the Igorrotes were replaced by the next sensation. Second, the exhibition of these men, women, and children came to be seen as a shameful episode in U.S. history.

Human zoos fell out of fashion by the 1930s, replaced by other forms of entertainment like cinema and television. By the end of the World War II, classifying and displaying human beings as “civilized” or “primitive” was seen as a toxic form of ethnocentrism.

We no longer visit amusement parks and fairs today to ogle people who are different from us—though a knowing 21st-century version of the freak show still exists at Coney Island. But reality television continues to parade a stream of people deemed “freakish,” or “exotic” before fascinated audiences across the globe. The medium may have changed, and many people might not admit to watching these programs, but the human desire to look at people they see as “different” remains deeply ingrained.

More than a century after their show at Coney Island, a mere glimpse of the Igorrotes in a photograph charmed me. But their story is profoundly disturbing; lured to America to make a better life, they were widely betrayed—by their manager, by the U.S. government, and by the very society that fell in love with them. It is a story that makes us question who is civilized and who is savage.