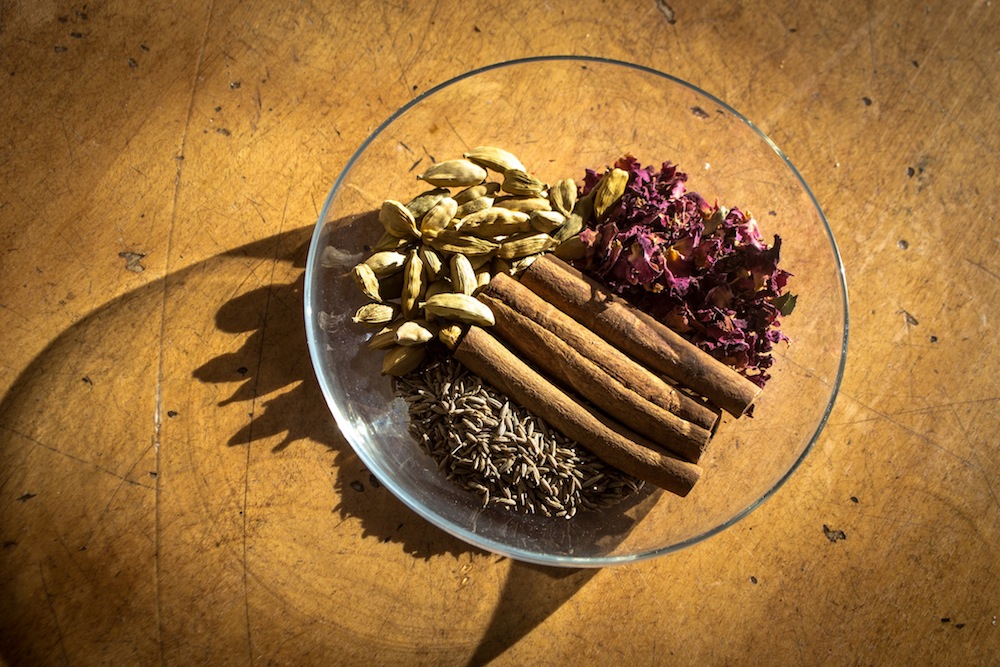 My cavalier cooking practices have been a cause for shame and concern for my Iranian mother. To me, eating is just something you do to stay alive; for her and her legion of friends and family that grew up in the Motherland, cooking is a rite of passage to womanhood, the foundation of family and all things good in the world.

You know, everything a ready-made, heart attack-inducing Doritos Locos Taco is not.

So it comes as no surprise to find my mother one day standing by my open fridge grasping a small jar between her index finger and thumb.

“This is hell. I will put it on the side of the fridge, you know, in case you need it,” she says.

It’s just a coincidence that the name of this Persian staple spice—cardamom—is the same word for eternal fiery doom in English.

My mother has been sneaking in her favorite ingredients next to the Hershey’s chocolate syrup and the blue macaroni and cheese box in my kitchen ever since I began dating the man of her dreams, now my husband. Having grown up with his own Persian mother’s everything-fresh-from-scratch cooking, he wouldn’t mind eating a meal that’s not from a box. So the more serious we got, the less subtle her hints. She graduated to telling me, “You seriously need to learn how to cook. It’s not funny.”

Because her comments implied that cooking meant keeping a man, I was very adamant about never lifting a pan. Cooking in this cultural context seemed primitive, sexist, and totally un-American. Where did I get this idea? From my mom who, ironically enough, preached to my sister and me the importance of women procuring financial and personal independence and security through education, privileges she didn’t have growing up in Iran.

Still, I understood where she was coming from. In my mother’s Tehran, it literally “took a village” to raise and maintain a family. The older generation provided food for the burgeoning family, and food was a community affair where everyone helped with the preparing, cooking, and eating. One of my distinct memories from childhood in Iran in the late 1980s is the women in my family cleaning and stemming herbs for rice and stews at our house. Sitting around with their fingers plastered with wet dill and their mouths running with the daily gossip, they were a less sexy version of Sex and the City.

My family moved to Los Angeles in 1991 after a pit stop in Austria for a few months to get our papers together. Or, more specifically, we moved to the enclave known as Tehrangeles where Iranians—especially Iranian Jews—settled after the Islamic Revolution in 1979.

But in L.A., I saw less and less of the chattering relatives, partly because they probably got sick of my mom giving them chores. But also because no one has the luxury or time to sit around stemming herbs all day when there are errands to run, e-mails to send, and nails to be manicured.

The idea was to adapt to American life enough to get by, but still speak, breathe, act, and eat Persian. Which led to a lot of awkward conversations at the school cafeteria explaining my pungent green stew to my friend with the crustless PB&J. And every Friday night, we always had to have the Thanksgiving-size Shabbat dinner, complete with the angry drunk uncle who asked the same questions every time (“How much money are you making writing? That’s horrible. You should go into real estate.”)

Starting a family of my own, I’m trying to reconcile this need to connect through food with the American notion of independence and can-do-it-all attitude. While I do need some guidance and appreciate when my mom brings over the occasional leftover split pea stew or herb quiche, I don’t want to come home to a tower of Tupperware in my refrigerator. The constant parade of handouts from my mom make me feel as if I’m failing as a nurturing wife and mother, roles I had totally been reluctant to take on yet will be damned if I don’t succeed at them.

So I decided it was time to add cooking to my repertoire. I mean, how hard would it be to buy some ingredients, mix them together, and throw them in a pot to cook if it meant so much to my family? Between Google and the TV, I was confident I could figure it out. I announced to my mother that I was cooking a traditional Persian meal for my husband. “That’s great, azizam,” she said, in a sort of God-I-hope-you-have-a-fire-extinguisher-handy sort of tone. “Let me know how it goes.”

I searched “dinner recipes,” then “easy dinner recipes” and finally “really super duper easy dinner recipes” and was overwhelmed by the number of ingredients, steps, and verbs. How do you zest a lemon? Dredge individual mint leaves with sugar? What the hell does dredge mean, anyway? Just doing the measurements alone seemed to require a Ph.D. in calculus. It occurred to me that I had never seen my mother use a measuring cup or an oven mitt.

I was not going to solicit help from my mother, so it was fortunate I remembered that someone had once given us a beautiful Persian cookbook called Food of Life. I swiped the dust off its cover and was delighted to find that it was a literary nerd’s dream come true. Besides recipes, there were pieces of Persian poetry, art, and stories.

Excited at seeing my favorite recipe in English, I braved the long list of at least two dozen ingredients and committed myself to making rice meatballs.

It took me two days to prepare and make these meatballs. I shopped at Trader Joe’s for ingredients I recognized (eggs, rice, tomato paste). I headed to “Persian Square”—an area of Westwood Boulevard where the Iranian version of every business has a storefront—for those I did not.

At Sun Market, the couple running the place was happy to see “a young person” take interest in her native food. They helped me find everything I needed and threw in some unsolicited advice while they were at it (“You really should learn how to read Persian”).

So finding advieh—a mixture of cardamom, cinnamon, rose petals, nutmeg, and cumin—green plums, and summer savory was not really an obstacle. Putting them to use was.

When I was done chopping, slicing, rinsing, boiling, and whatnot, the kitchen was a CSI murder scene. There were grains of rice and petals of herbs on every exposed surface, including the stove, tiles, floor, and sink. Dante’s “Inferno” would have made a more suitable excerpt than Rumi’s poetic fancies.

My husband was grateful for the effort. He ate carefully, as if to detect poison before it was too late. Having taken one look at my disheveled exterior, he couldn’t fathom why I’d go through all the trouble. But it wasn’t really about him.

I wish this experience had made me fall in love with cooking. But at least I no longer found it synonymous with the Dark Ages. I had now tried on my mother’s shoes and saw what an ungrateful brat I’d been. I understand there’s an art driven by love for family and the incessant desire to feed and nurture them. I’m happily going to take them up on their offers to bestow leftovers and swallow my pride until I get the hang of basic kitchen measurements.

That’s the paradox my mother embraced all these years slaving over elaborate meals while preaching the importance of prioritizing education, career, and independence: You can strive to have it all. Doesn’t mean you will, or that you’ll be good at it, but you can and should try because you have the freedom to do so. And that’s the luxury of being an American: not settling for one identity, especially if you’re a woman.

She was beyond amused when I recounted to her the tale of the rice meatballs. One day, to encourage me, she came over with a new bottle. “This is zaferoon. In America it’s called ‘saffron.’ It’s originally from Iran, where the best zaferoon in the world comes from. Ask anyone. Even Americans.” She pauses to make sure I’m watching her. “I’ll put it right here, you see? Next to the string cheese.”