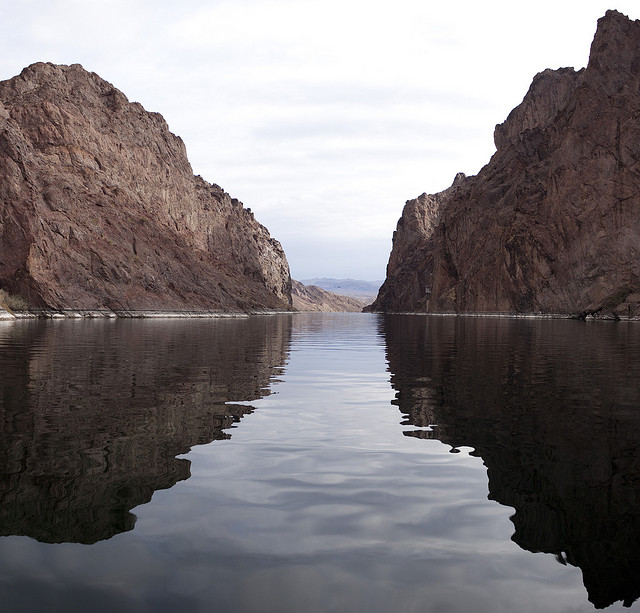 Buying back the Colorado River

The challenge of cooperation and the Colorado’s future

In the Southwest, even a place like Las Vegas’ Caesars Palace relies on the Colorado River, which is responsible for $1.4 trillion in annual economic activity across the region. After 15 years of drought, the hotel-casino is now saving 30 million gallons of water a year by using a car wash-like laundry to clean its linens and towels.

If river flow continues to decline, it will be an economic as well as an ecological disaster affecting everyone from the maids at Caesars to the endangered humpback chub.

In advance of the Zócalo/ASU event “Can the Colorado River Survive?”, we asked people who study, manage, and document the river to tell us how we can make sure the answer to that question is “yes.”

Buying back the Colorado River

Let’s start with the basics. Over three quarters of the stream-flow that pours down mountain valleys across the Colorado Basin states is appropriated for human use. Some of this water is used and returned, some comes from the ground, but by and large, there just isn’t much left over for fish. Just ask a salmon fisherman in California, or a subsistence fisherman in Mexico’s Sea of Cortez. Many of the great rivers of the West no longer flow to sea, including the Colorado. Some flow backward—the San Joaquin is pumped back uphill into aqueducts that feed growing crops and cities in Southern California.

Why do we do this crazy stuff? For good reason. Water grows food, alfalfa, almonds, avocados, and apples, among other crops. The U.S. has one of the most reliable and clean public sources of tap water, and we use this water to maintain a quality of life unequaled around the world. Water is also essential for business. Santa Clara, California-based Intel, for example, needs enormous amounts of ultrapure water to clean computer chips that drive our digital economy. There are so many good and important uses of water that we just tend to forget about leaving some in rivers.

How do we remember to leave some in the Colorado River—and how can we restore its flows? By establishing a revolving fund for water quantity improvement—to buy back the water. Such a fund could allow business, irrigation districts, or municipalities to borrow against the fund to develop water savings projects (more efficient pipe systems, desalination, water reuse plants, drip irrigation projects) and repay the loan at a lower rate by setting aside a small amount of this saved water for the river. The states that manage these funds would trade the borrower (i.e., a municipality) a lower interest rate for a small amount of water saved by the borrower’s project (i.e., a reuse facility) to be set aside for the river. The Sonoran Institute’s Minute 319 pulse flows have already established a bilateral governmental mechanism for this water to make it from the U.S. to the sea in Mexico. We just need the cash to make it happen more often.

John Sabo is a professor in the School of Life Sciences and director of research development at the Julie Ann Wrigley Global Institute of Sustainability at Arizona State University. He is interested in understanding how to make more resilient human and natural water water systems. He works on rivers in the western U.S. and in South East Asia. Follow him on Twitter: @jlsaboASU

In 2014 we witnessed an extraordinary restoration event: the return of water into the Colorado River delta as a pulse to rejuvenate this ecosystem. For a brief time, the river reconnected with the Gulf of California for the first time in over 15 years.

This was possible thanks to the binational agreement between Mexico and the U.S. known as Minute 319, which for the first time allocates water for the environment in an international river. But the agreement goes beyond the environmental component, and includes new provisions to move us forward in a new era of sustainability in the Colorado River Basin, based on collaboration and an understanding of the new hydrological conditions in the system.

For the first time, the two countries are collaborating in addressing issues of drought, shortage, and water conservation, with open participation from a diversity of stakeholders and scientific input from academics on both sides of the border. The basin faces tremendous challenges ahead: drought, climate change, increasing water demands, and environmental recovery. But significant steps forward have been made to prevent a water crisis, including the acknowledgement of these challenges and the development of collaborative solutions.

There is still much work to be done. We live in a “new normal” in the basin, where cooperation is more productive than confrontation. And we have a responsibility to protect the environmental services that the basin provides, from the headwaters all the way down to the delta, where the river meets the sea.

Osvel Hinojosa is the director of the Water and Wetlands Program for Pronatura Noroeste. He obtained his Ph.D. in Wildlife and Fisheries Science from the University of Arizona. He has been leading the efforts to restore the Colorado River delta during the past 17 years, including the implementation of strategies to restore river flows and activities to recover native riparian vegetation. He was part of the binational negotiation team of Minute 319.

The only way the Colorado River can survive as a flowing river, one that supports fish and recreation and not just plumbing demands, is if the public decides they want all of it–the entire lifeline from mountains to sea–and not just a few highly regulated “wild corridors.”

I grew up on the Rio Colorado, in central Colorado, and I’ve followed it, my backyard river, source to sea many times now to document its plight in photographs, as well as a book and three short films. I’ve walked its dry delta and most recently, I, and two others, became the first to paddle that same delta, all the way to where river kisses the Sea of Cortez, during the historic pulse flow of 2014.

So I’ve seen this western lifeline as a river of a sand: dead and dry as the parched desert around it. But I’ve also seen it as a river “nowhere and everywhere” as the late conservationist Adlo Leopold once described it: teaming with life and laughter on its banks. It will take public will to restore that second version of the river and keep it. Do we want acres of blue-grass lawns and fountains, or a flowing river? How many straws should sip from the mighty Colorado before we drain it completely, including the Grand Canyon?

I’ve met scores of hydrologists, engineers, biologists, and river rats who are hollering at the top of their collective lungs to protect this magical western resource. I’ve also heard scores of reasons why this river runs better when it is wet–for fish, wildlife, farming, food, and us. Without careful attention, the “most loved and litigated river in the world” will be hard to save.

Benjamin Franklin once wrote, “We learn the value of water when the well runs dry.” A recent study shows that the Colorado fuels $1.4 trillion in economic activity across its seven western states. I hope the public recognizes this value soon, before more of it dries up.

Pete McBride is an award-winning photographer, writer, and filmmaker, who has traveled on assignment to over 70 countries for publications including the National Geographic Society and Smithsonian. For the last five years, he has documented the Colorado, culminating in the book, The Colorado River: Flowing Through Conflict.

The challenge of cooperation and the Colorado’s future

Over the past two decades, collaboration and cooperation at the local, state, and federal levels has yielded a host of policies and programs that are enabling water managers in the Colorado River Basin to chart a positive, albeit cautious, course for the future.

California has reduced its reliance on Arizona’s unused water; interstate banking agreements— which allow Nevada, Arizona, and California to exchange real and virtual water allocations between themselves—have been implemented; reservoir operations have been articulated that describe how and when water surpluses and shortages will be shared among both domestic users and Mexico; and new programs have provided flexibility to water users while also helping to bolster reservoir levels.

Even with these successes, water managers are grappling with the reality that persistent drought will continue presenting hurdles to long-term progress in restoring the Colorado River’s flow. Moreover, with the first ever shortage declaration—determined and declared by the federal government at specific lake elevation levels—looming in the next two to three years, the cooperative agreements of the past will face even greater tests.

To that end, water managers throughout the basin are forging on with innovative, cooperative agreements. Recent efforts such as the Pilot System Conservation Agreement and the Memorandum of Understanding for Pilot Drought Response Actions represent voluntary actions across all three Lower Basin States to address declining reservoir levels. Through these programs, California, Arizona, and Nevada have agreed to split costs to pay farmers to fallow their land, with the saved water going back into the river system to maintain the health of the river. These programs will provide valuable information about the availability and scalability of different conservation measures to respond to protracted drought conditions.

Near-term threats posed by declining lake elevations cascade across all water use sectors, priorities, state borders, and international boundaries. Water supplies, hydropower production, water quality, and environmental resources are all at risk. No single water use sector offers a “silver bullet” solution. Addressing the risks will require participation from every beneficiary of the river in a manner that acknowledges and respects our differences and builds on past successes.