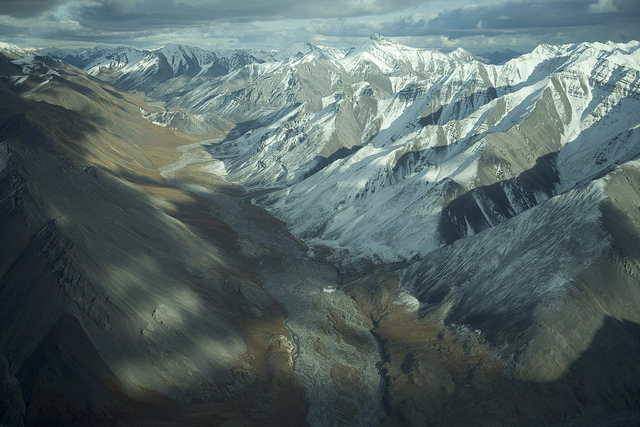 The value of virgin land on the frontier is based on what it can yield in economic terms. Alaska’s conservationists knew this and wanted to preserve entire landscapes for their intrinsic (and non-economic) values in perpetuity because—if for no other reason—there was so much pristine land in Alaska so late in the history of humankind.

The conservationists’ efforts culminated with the Alaska Lands Act of 1980, the most significant land conservation measure in U.S. history. It protected over 100 million acres of federal lands in Alaska from development, doubled the size of America’s national park and refuge system, and tripled the amount of land officially designated as “wilderness,” America’s most protective status. The Lands Act was generally cheered in the U.S., and Alaskans played key roles in its passage. But the new state’s experience of having so much land—so much wealth—wrested from it by the federal government left most Alaskans resentful and wary. President Obama’s recent proposal to extend wilderness protection to the coastal plain of the Arctic Refuge—at once a prospective oil resource and the richest wildlife habitat and most scenic part of the Refuge—reopens an epic, and repetitive, conservation battle.

And somewhere along the way as you acclimate to the 24-hour daylight, your small party can be overrun by caribou.

It’s a fight I’ve been involved with since the summer of 1989, after my junior year in college, when a buddy and I drove from Florida to Alaska to help clean up the Exxon Valdez oil spill. A year later, I moved to Fairbanks, Alaska to work for the Northern Alaska Environmental Center as a grassroots organizer to help end America’s dependence on fossil fuels by constraining supply (keeping oil from the Arctic National Wildlife Refuge from ever going to market) and driving the price of crude to where alternative energy sources could compete. I rolled into Fairbanks the day Saddam Hussein invaded Kuwait and went straight to work organizing Alaskan preservationists against Alaska’s congressional delegation and the Alaskans who said “it’s our oil”—by which they meant Alaska’s oil to pump and sell. But the Alaskans with whom I worked—on the notion that “this land is our land”—defeated the Alaskan majority, as they had in 1980, by allying with groups like the Sierra Club and the Wilderness Society that could mobilize the national majority of people who wanted wild places protected.

In the political quiet that followed, I explored the Arctic. I soon bought a small wilderness guiding company, which I was able to grow because the Refuge’s pristine vibrancy—and the attention from the political controversy surrounding “The Last Great Wilderness”—made a ready market.

Visitors to the Refuge get silence—some of the lowest ambient noise values on Earth—and clean air that you could imagine rolling down from the North Pole. Only in the Arctic Refuge can you float 100 miles of untrammeled, free-running river from its headwaters into the Arctic Ocean. And somewhere along the way as you acclimate to the 24-hour daylight, your small party can be overrun by caribou. You can spot wolves with bloodied snouts and pendulous bellies cruising the tussocky ground with heads low, ears flat. Or happen upon a polar bear den while walking atop a perennial snowdrift. But only if you accept wilderness on its own summer terms: wind storms that flatten every tent in camp, pooping in a group latrine in horizontal snow, portaging boats and gear over ice floes, or welcoming a snow squall as relief from mosquitoes.

Alaskans who would rather get at what oil may lie beneath the coastal plain point out that the vibrant summer season is the exception in the Arctic Refuge. No one visits during the cold, forbidding eight-month winter so the Refuge should be made to yield something for Alaskans. Most of Alaska’s richest one percent created their wealth from raw materials like timber, fish, minerals, and oil, and most everyone else in the private sector makes a living serving those industries. But oil is king. Ninety percent of Alaska’s state budget is funded by oil. Oil pumped today has to be replaced with new discoveries, and Obama’s intentions cast a dark cloud over future discoveries and Alaska’s future.

Alaska’s winters—particularly in Fairbanks—cause an acute utilitarianism that doesn’t readily recognize non-economic values. Even today, life is a struggle that can seem an unfair contest at minus 40 F. So why would anyone—by enlarging a wilderness area—take an economic possibility off the table?

I know why, because I have had the great privilege of knowing the coastal plain. I also believe President Obama’s proposal to protect the coastal plain is a palliative to his move—also recently announced—to allow oil drilling off the East Coast from Georgia to Virginia. The hand that giveth also taketh away, and most Alaskans will count themselves among the taken as the president allocates America’s wealth in land and water to balance America’s need for oil and its desire for wilderness.