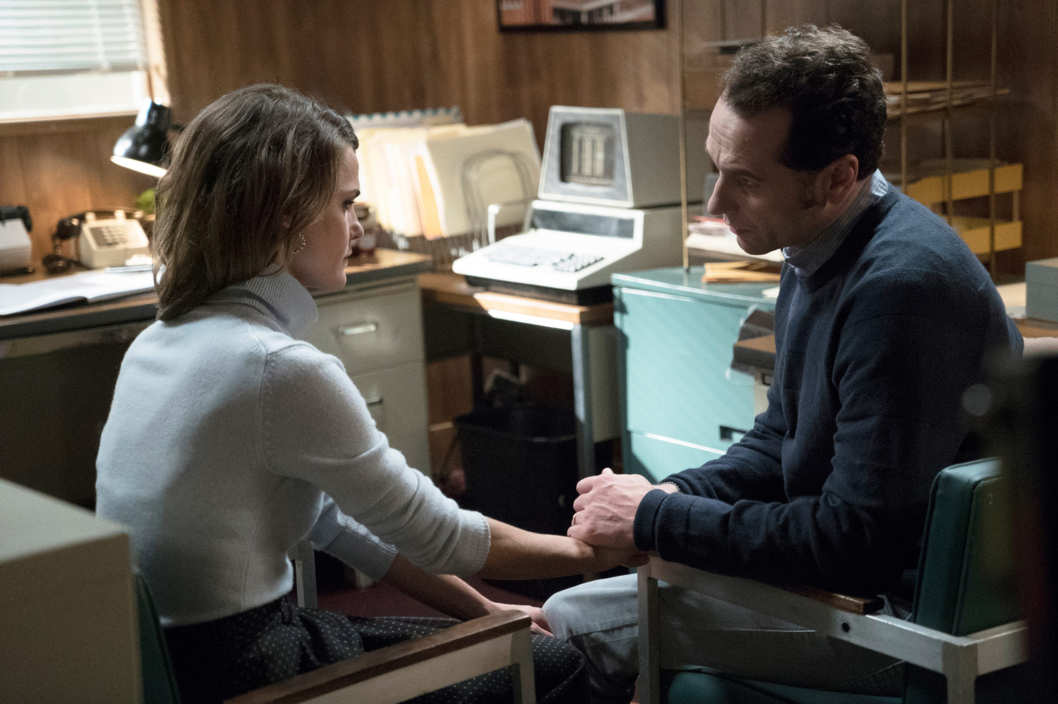 With the close of its third season, The Americans, Joe Weisberg’s twisty spy drama, remains the best show on television. It’s not excellent because it’s often thrilling—though it is—but because it understands that espionage is about the cultivation of intimacy rather than the mere collection of intelligence. At its core, it tells a story about human relationships, about the bonds we form, the way that we form them, and how we change in the process.

Along with his collaborators, Weisberg, who once served as a CIA officer, staged The Americans’ latest season finale against the backdrop of Reagan’s notorious “Empire of Evil” speech, a narrative saturated with rigid—and rigorously enforced—dualities. In lines that play over the episode’s final moments, Reagan speaks of “the struggle between right and wrong, and good and evil.” These cold war values are magnetic poles, as repulsive to one another as they are attractive to those inclined to approach them.


Spying almost always starts with the cultivation of relationships, making espionage as much a matter of trust and mutual care as one of deception.

For 38 episodes, The Americans has been leading up to this moment, quietly building a case against Reagan’s zero-sum moral absolutism. A radical distinction between good and evil requires a willed distance from your opponents. In The Americans, however, espionage often means getting close, literally cozying up to those on the other side. In one typical plotline, the third season finds KGB analyst Oleg and FBI counter-intelligence officer Stan—two men who have loved the same woman, and who loathe one another—collaborating. Theirs is by no means an exceptional case.

In the end, the show’s protagonists have all been compromised by their proximity to others, none more so than Paige, the teenage daughter of deep cover Russian spies Philip and Elizabeth Jennings. Paige spends most of the season trying to figure out what her parents are up to, only to be torn apart when they admit what they truly are. The way that Paige’s ensuing crisis unfolds onscreen is as much about the way this discovery breaks down the distinctions—between America and Russia, self and other—that have structured her sense of self as it is about learning her parents have lied to her. To grow close to her parents, she has to become a little stranger to herself.

This fascination with the ambiguities of intimacy has long been a hallmark of Weisberg’s work, one demonstrated in his 2009 novel, An Ordinary Spy. We tend to think of spying as the business of determining what others know, but Weisberg’s early work suggests that it’s often about learning to know others, a premise he develops further with each new episode of The Americans.

An Ordinary Spy details the experiences of two young CIA case officers working in an unnamed country. The first, Bobby, who arrives shortly after the September 11 attacks, recruits a woman from another nation, only to fall in love with her. When his superiors discover this transgression, they force him out of the Agency. Soon after, Bobby meets Mark, another operative, who describes his own tour in that same unnamed country at the end of the 20th century. As Mark explains to Bobby, he grew to care for his orphaned houseboy, and hatched a clandestine scheme to adopt him, with disastrous results.

Weisberg’s novel is as elegantly plotted as any episode of The Americans—a web of structural symmetries that pivot into meditations on the problem of difference. Ultimately, however, the book’s selling point is the strange style that Weisberg adopts throughout. An Ordinary Spy’s basic convention is that it has been evaluated by the CIA’s Publications Review Board (PRB), a very real institution that examines the work of former spies, censoring anything that could be deemed classified content. Though An Ordinary Spy is a work of fiction, Weisberg peppers its pages with blocks of redacted text, sometimes obscuring entire paragraphs with the thick black lines of the censor’s pen, as if it has been evaluated by the PRB.

In an age of almost universal surveillance, this narrative choice seems playfully elusive. The book deliberately omits matters of tradecraft and CIA protocol, absences that take little from the story. For example, while the book describes “crypts”—officially designated codenames assigned to foreign agents—but breaks off whenever the narrator begins to describe more the specific operational principles that underlie them. To this day, Weisberg is still bound to omit such information, whether he’s writing an essay or penning an episode of his television show. An Ordinary Spy’s omissions, however, are voluntary from the start, fundamental to the story rather than roadblocks in the course of narrating it.

Tellingly, in An Ordinary Spy, Weisberg blacks out every name, title, and detail that would identify the homelands of his characters or the locales in which they meet. No mere gimmick, this device is central to his larger take on espionage. Leaving out everything that might reveal how its characters live and what they believe, the book offers a vision of human connection unclouded by ideology. In this novel’s world, spying almost always starts with the cultivation of relationships, making espionage as much a matter of trust and mutual care as one of deception. By focusing on interpersonal relations rather than international ones, An Ordinary Spy drains much of the romance from espionage, returning it to Weisberg’s characters instead.

The PRB of An Ordinary Spy is an anonymous bureaucracy that paradoxically highlights the deeply human bonds at the heart of the novel. For Weisberg, it was once a similarly faceless organization, one whose potential intrusions frightened him when he was writing his first, abandoned novel, a book that “had Russian themes,” but wasn’t actually about espionage. Gradually, however, Weisberg has come to know the PRB better. “A lot of my emails [have been] answered by the same group of three or four people over the years,” he told me. “So I do think of them as people. I also find them easy to work with. You don’t think of a bureaucracy as reasonable or personable.”

Weisberg has cultivated a kind of intimacy with an organization he once understood more antagonistically. Before he began The Americans, he had pitched a show called The Station that the PRB had rejected outright, presumably because it had drawn too overtly on the classified elements of his own experiences. More generally, however, his initial ideas about the PRB were structured around a fantasy of a cold, monolithic institution, a fantasy that obstructed a set of real people who he’s gradually come to understand. This experience echoes the arc of many of his narratives, stories that treat the way our others become familiar to us.

“Intimacy” often functions as a euphemism in conversations about The Americans, an allusion to its surprisingly explicit (for basic cable) sex scenes. This is no surprise, given that sex has almost always been shorthand for the intimate elements of espionage. In the James Bond series, for example, the hero’s sexual conquests almost entirely take the place of actual intelligence gathering.

On The Americans, however, sex is a mere facet of intimacy writ large. As Sandra Beeman—Stan’s estranged wife—puts it in the finale, “The sex part is not really about sex … It’s about everything. Learning how to be open, really knowing yourself, someone really knowing you.” Consider a notorious scene from the second season in which Kerri Russell’s Elizabeth asks to have sex with “Clark,” one of her husband Philip’s alter egos. The sequence that follows is jarringly aggressive, so much so that it leaves Elizabeth in tears. Though Elizabeth and Philip barely knew one another when they arrived in the United States years before, they’ve gradually built something more tender and real. Here, what terrifies her is the realization that in this animalistic persona Philip is all but cut off from the connection that they’ve been forging. She’s glimpsed a part of him that she’s never seen before, and she’s forced to acknowledge that it may be just as real as those that she knows better.

On The Americans, spying isn’t really about spying, no more so, at any rate, than it is in other espionage masterpieces, like W. Somerset Maugham’ Ashenden, which Weisberg calls the most realistic spy narrative he’s ever read. In these works, as in life, spying is instead about exposing and discovering those parts of ourselves that we cannot conceal. By inviting us to worry over the very ordinary domestic convolutions of two Soviet spies, The Americans asks us to connect with our political other. What is this identification if not the starting point of espionage? And what is espionage if not the starting point of intimacy?