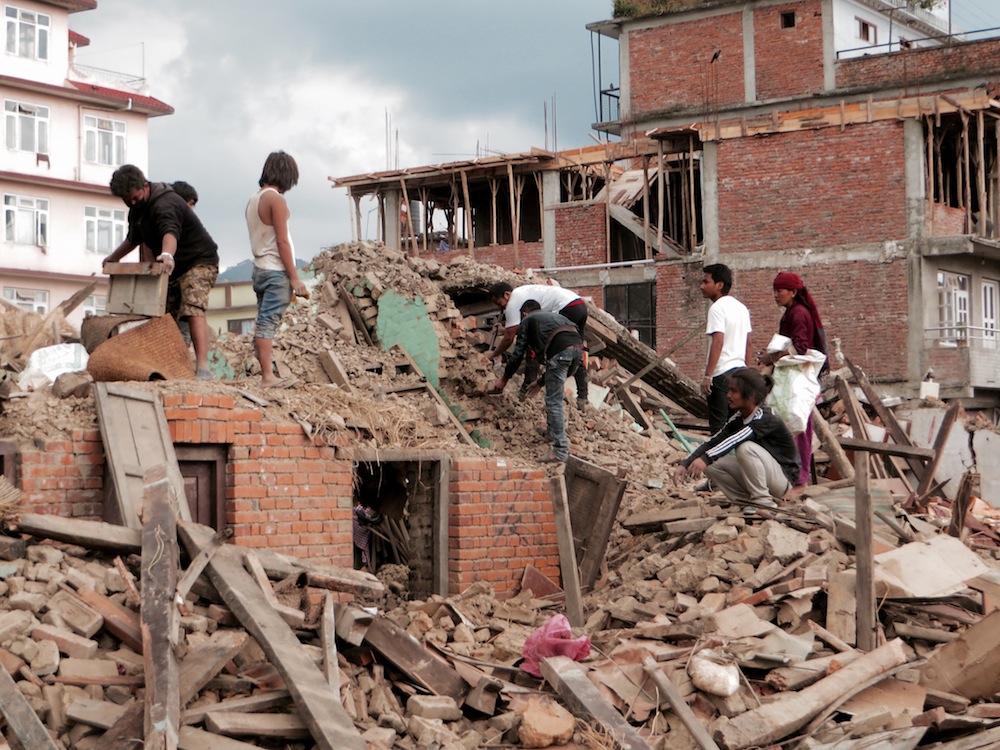 I was at my house not far from the center of Patan, a city right next to Kathmandu, when the shaking started. It was about noon on Saturday and my driver, Runjin, and I were talking about hanging some Tibetan flags in my bedroom.

As we both fell to the floor, sliding around, he grabbed my arm and kept trying to reassure me, “It’s OK, Olga Didi” (older sister). A heater on wheels with a propane tank came rolling toward us, and I kicked it back, slithering to get under my desk—my “go to” place in the event of an earthquake. The shaking stopped, and we went outside with Ram, my cook.


They had so few material possessions, yet they were the most joyful, funny, amiable little kids anywhere on earth. Their most fervent wish was to go to school someday.

The earthquake happened four hours before a big early birthday party for me—I’ll turn 90 in June. We were expecting 600 guests, including many people who made long bus trips from other parts of Nepal.

My first thought was for the children who live in the J and K houses, the two children’s homes in Patan run by the Nepal Youth Foundation, which I founded in 1990. These 60 boys and girls range in age from 2 to 16; some of them are orphans or were abandoned by their parents, some were child beggars, and some are disabled. Thankfully, all the children survived the earthquake, along with the foundation staff and their families.

For 25 years, I’ve divided my time between Nepal and Sausalito, California. I first visited Nepal in 1984 when I was 60 and about to retire as a research attorney at the California Supreme Court. I was overwhelmed by the stunning scenery and friendliness of the people—and especially by the children I encountered. They had so few material possessions, yet they were the most joyful, funny, amiable little kids anywhere on earth. Their most fervent wish was to go to school someday.

Totally unexpectedly, I discovered a country and a cause to which I would devote the rest of my life. I formed the Nepal Youth Foundation in 1990; since then, the organization has provided education, health care, shelter, and freedom from servitude to more than 45,000 children.

In the immediate aftermath of the quake, about 50 people took refuge at my house, including 19 girls who came to my home from West Nepal to perform their incredible local dances at the birthday party. These girls were once trapped in the Kamlari system—sold into domestic slavery by their desperately poor families. Since 2000, NYF has liberated over 12,000 of these girls and paid to educate them, giving their families piglets to compensate for lost earnings. Recently, the government agreed to cover these costs—but we continue to provide former Kamlari girls with training and mentoring. I was worried about the girls, but we thankfully managed to find them. They were quite traumatized, and some were crying. But within a few hours, they calmed down. They napped in the sun and felt safe—together and in an open space.

That night, the girls helped Ram to prepare the Nepali staple dinner of dal bhat and tarkari (rice, lentils and vegetables) for the big crowd. For that meal, Ram used cabbage from my garden. I’m worried that food and water may become a serious problem; our water filter operates on electricity. There has been no electricity since the quake, and the Internet connection is spotty.

There have been more than 80 aftershocks, some of them quite severe. Everyone who wasn’t injured in Kathmandu spent the afternoon outside—and hundreds of thousands of people slept outside all night.

My house has a large garden with a high wall around it. There was a crowd of people camped in the empty space on the other side of my wall, and every time the earth shook, a great shout went up.

Almost everyone at my house slept outdoors, including two families with newborn babies. The former Kamlari girls also slept outdoors on mats until it started to rain and they ran inside and spread out on the floor of my living and dining rooms. I told them that, as a California girl, I wake up two or three times a year in a shaking bed at my home in Sausalito. I just put the cover over my head and go back to sleep. They told me later that when the aftershocks began on Saturday, they thought about what I had said and went back to sleep.

The girls left on Sunday for the 14-hour bus ride back to Dang in West Nepal. That day, I wanted more than anything to see the kids, but CNN called for interviews, and by the time I finished with them, it was dark. The children have been camping out at the empty lot next to the J and K houses. I understand the little boys view this as an adventure, but I am sure many of them are shaken by the experience.

Some of the alumni, who are now college graduates, have returned to the J and K houses—not only because they view them as their homes, but also to help the “uncle” and “auntie” who supervise the kids.

I returned home to California on Wednesday night. The international airport is open, but (tragically) the airport for domestic flights is not operational. The devastation in rural areas, where 80 percent of Nepalis live, is overwhelming and there is no way to get relief to most of them.

I am so sad to be leaving at a time like this, when so many people I care for are suffering. But I think I will be more useful working from California to raise money for the relief effort.

Because NYF is on the ground, we know where the greatest needs are in Nepal right now. The hospitals are jam-packed with the injured and lacking in beds, medical equipment, food, and medicine. On Monday, NYF bought 200 mattresses, and bedding and delivered them to one of Nepal’s main government hospitals. We also bought $30,000 worth of surgical supplies for the most advanced and efficient public hospital in Nepal.

NYF has also established a shelter for patients who are ready to be discharged from the hospital but have no place to go because their homes are destroyed, there is no transport, and their relatives can’t come for them. Doctors are desperate to discharge these patients because seriously injured people are lying in the corridors or outside, waiting for a hospital bed.

We have a beautiful facility we constructed right outside Kathmandu a few years ago to rehabilitate malnourished children. We began moving discharged patients into it on Tuesday afternoon. Some of these patients will need ongoing care, so 40 former bonded girls we are training as health assistants are coming down from Northern Nepal to work in the facility.

Looking ahead, we already know there be a massive demand for skilled construction workers. NYF has experience in job training and construction projects, and we plan to train 1,000 people in construction skills that incorporate seismic safety, mostly in villages where the majority of the destruction occurred. In addition to allowing them to earn a livelihood, this will enable people to rebuild their own homes. NYF will provide them with supplementary funds to purchase steel rods and concrete so that they can replace their mud homes with solid structures.

Hundreds of schools have been flattened. Using our experience in building more than 100 schools or schoolrooms, NYF also plans to rebuild 50 of these devastated structures so that children can resume their education.

We’re certainly not the only group that has sprung into action to help in the aftermath of this catastrophic earthquake, but we are trying to address the most pressing needs. The scenes of destruction all around Nepal are sickening. My heart goes out to so many people here who have lost so much. Now we have to do what we can to help them recover from this devastation.