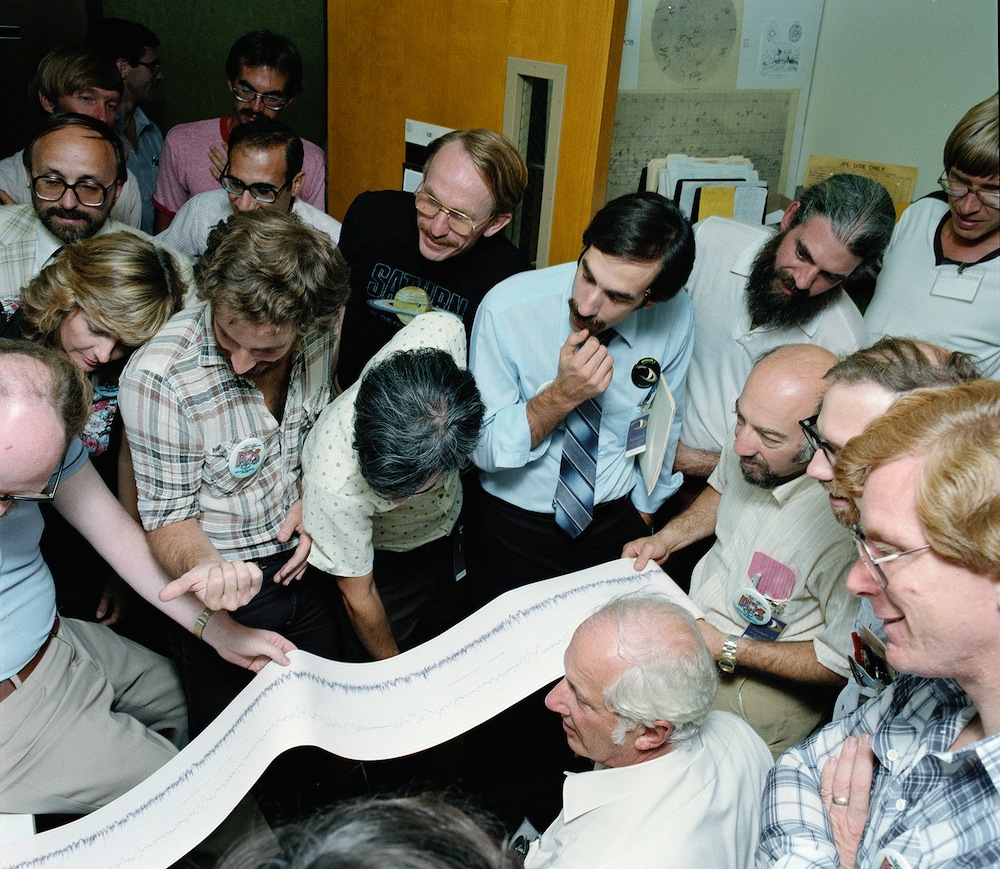 I remember hearing about the launches of the twin Voyager 1 and Voyager 2 spacecraft on the evening news in 1977. I was 12 then, and in love with the dark skies and glittering stars that surrounded me in rural Rhode Island. The newscaster—probably John Chancellor since we were an NBC Nightly News household—talked about the Voyagers’ mission to explore the outer solar system and how Voyager 2 would reach its final planetary destination, Neptune, in 1989. That was the whole of my lifetime into the future—it gave me a sense of how vast space really was.

I was in high school when the two Voyagers swung by Jupiter and Saturn. Along with the rest of the world, I gazed in awe as the spacecraft revealed glorious images of Jupiter’s Great Red Spot, violent volcanoes on Jupiter’s moon Io, Saturn’s stunningly thin and fragile rings, and the thick orange haze shrouding Saturn’s moon Titan. These weren’t the first images of these giant planets, but the ones before Voyager—from spacecraft that were designed to demonstrate that NASA could navigate in deep space and send scientific data back—were very poor. With Voyager, we suddenly had striking images that made even an amateur like me feel as if I were there, riding shotgun on these robots.


I remember seeing the puzzled looks on the scientists’ faces when they saw the crazy geology and 10-mile-high cliffs of ice on the moon Miranda. I thought, You’re the world’s experts—how can you have no idea what’s going on?

Voyager is the reason I got into planetary science, a career that has enabled me to participate in other robotic space missions and to serve as the current president of The Planetary Society, which educates the public about space and advocates for our continued exploration of it. It is a uniquely important mission in humankind’s history of exploration—as a colleague once put it, “You only explore the solar system for the first time once.”
The two Voyager spacecraft, meanwhile, are still hurtling ever farther out into outer space, a testament to the ingenuity of the people who built them. When I heard that Voyager 1—the faster of the two spacecraft—had become the first human-made object to travel into interstellar space (the space between stars) a few years ago, I thought it was time to revisit this mission and see what made it so extraordinary.

Luck, of course, is part of Voyager’s special recipe. The sun’s family of planets travel in their orbits like the hands of a giant cosmic clock. Once every 176 years, Jupiter, Saturn, Uranus, and Neptune align in a spiral that provides the opportunity to send a single spacecraft past all four giant planets, using the gravity of one to slingshot on to the next. Of course, that occasional “Grand Tour” alignment had to be discovered—and celestial navigators from NASA’s Jet Propulsion Lab noticed it in the 1960s and were able to exploit it in 1977 for Voyager 2. The last time such an alignment occurred, back in the early 1800s, the frontier of exploration was defined by European wooden sailing ships.
It was lucky, too, that the direction of this alignment sent the Voyagers on the shortest path to interstellar space. After about 35 years in transit, Voyager 1 still had enough power left to run instruments that could detect the changes in its environment. Getting to interstellar space the long way could have taken decades longer, with no guarantee it could still run its science instruments.

But the key to Voyager’s success has really been the people. I began to meet them around 1984, when I was a freshman at Caltech in Pasadena. I was lucky enough to get a work-study job with Ed Danielson, a member of Voyager’s camera team. Back then waiting for images to load on computer screens was like watching pain drip down a wall. So processing images was great grunt work for students. When I started, we were still processing images from the Saturn encounters of 1980 and 1981. 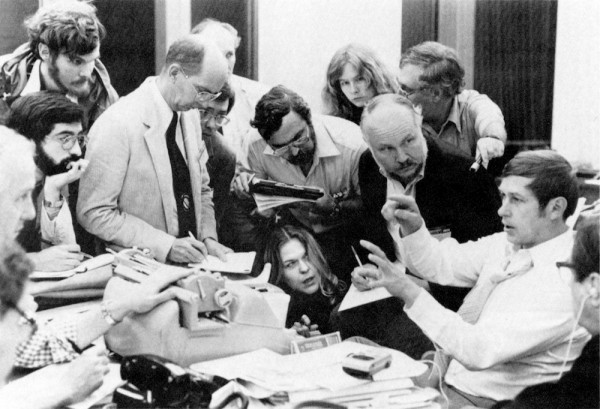 When the imaging team started gearing up for Voyager 2’s encounter with Uranus, Ed asked me if I wanted to get a pass to the Jet Propulsion Laboratory, a few miles away from Caltech. That’s where the spacecraft had been built, where they were being operated, and where all the scientists were going to be gathering during the encounter. I had no real expertise yet, so I didn’t expect to be doing technical analysis; I was just happy to be there in the middle of the action and see how “real” scientists worked. If you needed a cup of coffee, a copy made, or a pizza delivery picked up at the main gate, I was your man.

Almost all of what scientists know about Uranus comes from that encounter in 1986. I remember seeing the puzzled looks on the scientists’ faces when they saw the crazy geology and 10-mile-high cliffs of ice on the moon Miranda. I thought, You’re the world’s experts—how can you have no idea what’s going on? Then I realized not even they had ever seen anything like this before. Many of the scientists had thought Uranus’ moons would be boring iceballs.

So there lay the challenge to figure Miranda out. And the scientists were incredibly open-minded about the hypotheses they were throwing out—Were there plates moving under the icy surface? Were there volcanoes spewing icy lava? Of course, there were egos—every scientist wants to be the first one to come up with the answer to a difficult question. But under the guiding hand of the project scientist Ed Stone, the discussions were thoughtful even when there was disagreement, and they were always enthusiastic.

With all the back and forth, it took years to work out the leading hypothesis about why Miranda looks the way it does and it was something no self-respecting scientist would have suggested before Voyager 2’s visit: Miranda was probably hit by some other moon or slow-speed space rock in just the right direction to fracture it, but not blow it apart. Miranda’s own gravity reassembled the jumbled pieces and kept them from flying off into space.

Curiosities like this were the beauty—and the frustration—of Voyager. Each of the planetary encounters was a flyby. By the time we saw that Jupiter’s moon Europa had a surface that resembled cracked sea ice on Earth, it was already in the rear view mirror. And we only got good views of the sunlit halves of the planets or moons—what features were lurking on their dark sides? It took decades to send orbiters back to Jupiter and Saturn and we still haven’t yet returned to Uranus or Neptune. And we might not do so soon enough for many original Voyager team members, who are in their 70s and 80s and still have burning questions about that planet.

The Voyagers themselves are aging, too. Though their 23-watt transmitters and 8-track tape recorders are still going strong, the two Voyagers only have enough power to send back scientific data into the late 2020s and only crude “I am here” signals maybe into the 2030s.

Still, the machines themselves—and the Golden Record on each one that contains Earth’s greatest hits—will remain intact for millions, perhaps even billions of years. I don’t personally think that any other intelligent species will find the spacecraft any time soon (and sorry, Star Trek fans, I don’t see it turning into V’ger). But I am optimistic about our own space-faring future. I believe that the Voyagers will become moving museum pieces that we may be able to visit some day on interstellar cruises. It’s possible that in the far future we won’t remember Madonna or Watergate, but we will remember the two Voyagers as among the most ingenious objects human beings ever created, and their mission as one of the most ambitious journeys that humans have ever conducted.

*An earlier version incorrectly referred to the last time a single spacecraft could visit all four giant planets as the early 18th century. It was the early 1800s.