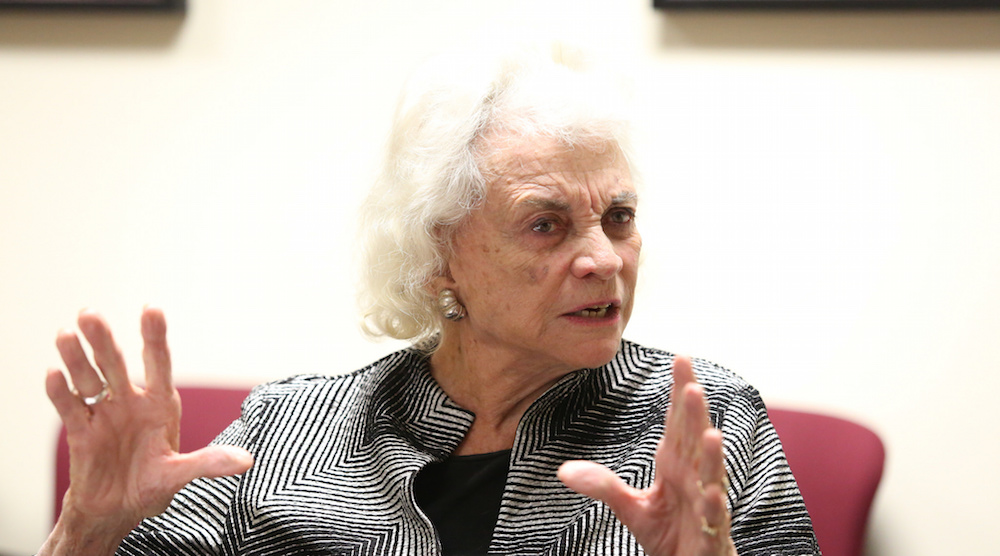 Sandra Day O’Connor is a retired associate justice of the United States Supreme Court. She was the first woman to be appointed to the Court and was the first female Majority leader in the Arizona Senate. She grew up near the Arizona-New Mexico border on her family’s Lazy B Ranch. Before participating in a discussion on the women of the American West, she revealed which of her colleagues on the bench told the best stories and the best way to separate a farm animal from the pack in the What It Means to Be American green room.

I haven’t read a great book recently. Maybe there are some, but I haven’t found them recently. Good, yes. Great, probably not.

Where would we find you at 11:00 on a typical Sunday morning?

Well, probably trying to find a good breakfast. I like to eat.

What dessert do you find impossible to resist?

I’m not a big dessert person. So I don’t think there’s anything that’s absolutely irresistible in the dessert category, but some of them are pretty tasty.

Whom or what do you root for?

If you’re into the sports team, I went to Stanford, so I’m always happy if they win something.

Several paintings, including one I had an artist paint of a mountain that is visible from the Lazy B Ranch. It meant a lot to me to have something like that from the ranch that I could appreciate. I enjoy that very much, because that was home to me for a long time.

What do you think is the best way to rustle a calf?

We don’t call it that. But if you’re asked to go get a certain animal, you have to go out, get near it, get behind it, and get it going. But it depends on what the animal is. Is it with the mother? It’s not going to leave the mother, so you have to bring them both in. If it’s in a herd of similar animals, you have to cut it out if you only want the one. That’s a little harder to do. You probably need somebody else out there to help you.

I couldn’t tell you. It just has to be in your head when you need it. Define the problem. Are you trying to write something, solve something, answer something? Then you go from there. They don’t just float in to you from outer space. You have to work on problems and try to solve them, I would think.

Which of your former colleagues told the best jokes?

What’s the last thing that made you laugh?

Oh, I don’t know. I’m sure it was something in the last day or so because I’ve had a few chuckles. I couldn’t tell you what it was now.

What do you think it means to be American?

It’s a great privilege. It means we have freedom to do what we want to do and pursue our individual interests. It’s a place where you can do that probably more effectively than you can in most countries in the world, so I think we’re pretty lucky in that respect. Freedom of choice as to what to do is probably more available in this country than it is in most.