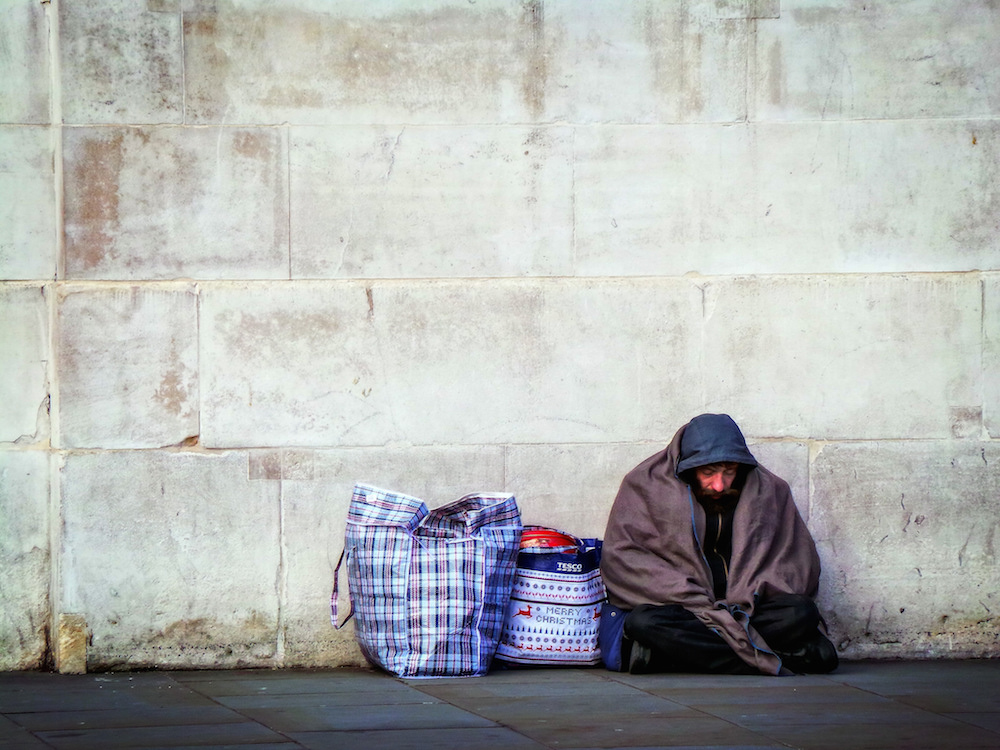 Encourage collaboration between governments and communities

Don’t get stuck in “pilot mode”

It doesn’t take more than a stroll down a city street to see that America has a homelessness problem. The guy tucked into in a stained blanket on the bench, the woman pushing a cart filled with everything she owns—from New York to Los Angeles, there are more than half a million people sleeping outside or in some form of transitional housing.

While this number is lower than it was during the recession, homelessness is still on the rise in many of the country’s major cities. New York City’s homeless population jumped 10 percent over the past year; L.A.’s jumped 12 percent. With housing costs continuing to skyrocket in these cities, there aren’t signs of this trend changing anytime soon.

Has progress been made? Or are more Americans simply bound to find themselves without a bed? In advance of the Zócalo/UCLA event “What Keeps the Homeless Off the Street?”, we asked people who study, write about, and are deeply engaged with the homeless: What have large American cities done that has successfully reduced the number of people living on the streets?

Supportive housing is a time-proven, cost-effective strategy that gives the homeless a second chance at life. But they can’t be forced into it. My organization, Common Ground, is a “Housing First” adherent, which means there are minimal requirements to move into the housing we provide. Asking someone to get sober while they are living on the streets is a recipe for failure. We believe the process begins when someone chooses to come inside, and are then given the tools they need to succeed.

New York has long been a leader in this approach. In 1990, when Common Ground was founded, Governor Mario Cuomo enacted the first “New York/New York” agreement, which made affordable housing central to how government can improve the lives of underserved individuals. Thousands of supportive housing units have been built under this program, and in the past year, New York City has actually recorded a decrease in the number of unsheltered homeless people on its streets.

These plans are not only humane; they will achieve long-term public savings. For every chronically homeless person given housing and support, we save $10,000 each year, because they’re not cycling through hospitals and jails.

But our work isn’t over. In a city built out to its edges, the cost of land is skyrocketing. It is critical that we continue to invest in supportive housing, create incentives for for-profit developers to build affordable housing, and use our scarce city-owned land to maximize housing options for vulnerable New Yorkers—including giving priority to non-profits.

In Los Angeles, the homeless crisis reflects a challenge that virtually every city, large and small, is experiencing across the country: How can we house the neediest among us in a humane, safe manner, while encouraging personal responsibility and accountability?

The root causes of homelessness are complex and interrelated: lack of affordable housing, job loss, economic inequality, poor decisions that result in prison sentences, physical and mental health challenges, and ineffective public policy have all contributed to the problem. But my experience working with the homeless suggests that there is a solution that is effective, at least for those that are ready, willing, and able to work: it’s called a job.

A job brings hope and dignity, in addition to a paycheck. Rigorous evaluations of programs like ours at Chrysalis demonstrate that formerly homeless individuals that hold a job for at least six months are significantly more likely to stay out of prison, maintain stable housing, have better health incomes, and significantly decrease their reliance on public support.

Organizations like the Center for Employment Opportunities and the Doe Fund in New York City, the Cara Program in Chicago, and the Women’s Bean Project in Denver all view employment as a key part of the solution to ending homelessness and poverty. Investment in, and expansion of, successful programs that bring economic hope and opportunity to our communities will help us solve this crisis.

Mark Loranger is the president and CEO of Chrysalis, a Los Angeles-based nonprofit that works with the homeless and those in poverty to help them find and retain employment.

Homeless people are not “hanging out” in the streets; they are living in the streets. They are conducting their lives in the only place available to them. I can assure you they would rather not sleep, eat, meet friends, and drink a beer there. They would rather have a place to go, something constructive to do, and a safe space where they could relax and reassemble their lives. Sound familiar? Most of us call it home.

But, because a home can be such an elusive goal for so many in today’s economy, a city’s capacity to keep people off of its streets is directly correlated with its ability to provide the range of services required to fully engage and support someone experiencing homelessness. One such program in Washington, D.C., the Real Opportunities Employment Training program, provides 20 weeks of culinary arts training. During the training, clients are given intensive case management, housing assistance, a stipend, and transportation assistance. Clients can also utilize all of the other services offered by the agency, including showers, laundry, phones, hot meals, pantry services, computer access, and a mailing address. In this comprehensive approach, there isn’t even any time to conduct life on the street. The program addresses basic needs, while supporting a client’s ability make the changes necessary to step out of their homelessness.

So, if we don’t want people living in the street, then we had better get about the business of providing them with a somewhere to live, where they can conduct their lives privately and with the appropriate supports, like those of use lucky enough to have a place we call home.

Alicia Horton is the executive director of Thrive DC, a homeless and low-income service organization dedicated to preventing and ending homelessness.

Encourage collaboration between governments and communities

In 2005, Utah launched a 10-year plan to tackle “chronic homelessness”—the state of being homeless for longer than a year or four times within three years and having an assessed disabling condition. That year, 1,932 individuals experienced chronic homelessness in the state. The 10-year plan centered on collaboration between local and state governments and communities, caring community support, and champions who built up local resources to improve services for the homeless across the state.

By January 2015, a count showed 178 people were experiencing chronic homelessness in Utah—a 91 percent decrease in 10 years. All 178 of these people are known by name. They have been professionally assessed, and we can help them move out of chronic homelessness if they choose. Utah is the first state to have a system in place capable of serving all of its chronically homeless individuals.

The reduction in Utah’s chronic homelessness is primarily due to the provision of permanent housing using a “Housing First” approach, which includes supportive treatment services in mental and physical health, substance abuse, education, and employment.

Tamera Kohler is the interim director of the Housing and Community Development Division at Utah's Department of Workforce Services.

Don’t get stuck in “pilot mode”

The United States Interagency Council on Homelessness just launched an amendment to Opening Doors, the federal strategic plan to prevent and end homelessness, and we did so with more confidence than ever in the nation’s ability to end homelessness for all Americans. We are seeing progress in many communities across the country, which both demonstrates that ending homelessness can be a reality and helps to provide a road map of strategies and practices for other communities to learn from and replicate.

Strategic approaches that I’ve seen in action in communities that are making the most progress include:

With these approaches, achieving an end to homelessness is within reach. The more we can learn from each other, the more success we will have in ensuring people have safe, stable places to call home.

Matthew Doherty is the executive director of the United States Interagency Council on Homelessness. Matthew is responsible for the implementation of the Opening Doors plan.

We’re at an important juncture in Los Angeles, where homelessness is publically acknowledged as a crisis, and there is much debate about what the solution or solutions should be.

At the Downtown Women’s Center (DWC), we have seen how an apartment and a supportive environment can transform a woman’s life and keep her from returning to the streets. We know this is the solution. Housing and supportive services are critical to ending the cycle of homelessness. But the problem is there is not enough housing.

Our organization has been working in Skid Row since 1978, addressing the needs of homeless women through basic services and permanent supportive housing. DWC was founded at a time when more and more women were ending up on the streets of L.A. with nowhere to go for meals, showers, clean clothes, or safety.

Today, nearly 40 years later, we continue to meet the needs of homeless women in downtown L.A. When one in every four homeless individuals is a single adult woman, we see a high demand for our services—and for the permanent supportive housing that gives women a place to call their own.

However, without the adequate funding for housing and increased committed action from our community and leaders, we cannot make a dent in decreasing the number of homeless individuals in our city. We need full funding for tens of thousands of affordable housing units across the city and the county. People are on the streets because they don’t have a home. The answer: let’s give them homes and support them on the path to stability. It’s that simple.