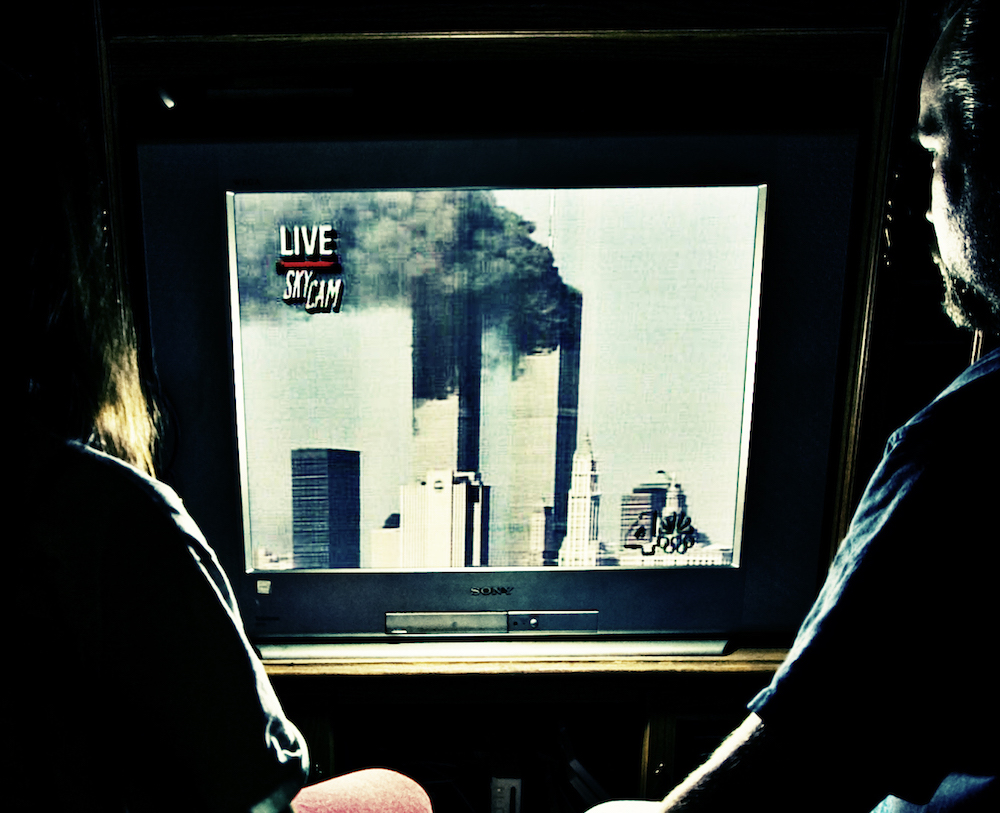 The story goes, my grandpa was sitting on his recliner watching TV when the news broke. JFK had been shot and killed. My mother was seven years old. She’d been playing in her father’s corn patch in the back of the house on Mahar Avenue in the Wilmington section of L.A. She saw my grandpa shed a tear for the 35th president. JFK’s portrait was one of two that hung on the wall of the antechamber adjoining the kitchen. The other portrait was of the pope.

My own JFK moment came 14 years ago this month on a loading dock in Long Beach. I backed my step van into the dock in the Cintas plant on that city’s east side, and then marked the grill pads, shop towels, mops, runners, and three-by-five and four-by-six mats on my inventory list before loading the items in order of the day’s deliveries. I was on a knee re-rolling mats when another driver stormed in and announced what had happened. A plane had just smashed into one of the Twin Towers in New York City. We were incredulous.

But we also had our jobs to do and our rounds to make, so I got back into the van and started to drive. In those days, I was the guy who took your dirty dust mops and soiled mop heads and gave you clean ones in return. I replaced the old air freshener pucks and checked the soap dispensers in public restrooms. I also delivered grill pads and wrap-around waist aprons to restaurant cooks or cocineros. I serviced businesses throughout Los Angeles and Orange Counties, but most of my stops were in Long Beach.

I can remember every stop from that morning, framed by the news I heard on the radio. As I drove, I learned of the second tower being hit, a third plane crashing into the Pentagon, and a fourth plane, intended for who knows where, crashing in a field. I was sad and disbelieving, and so were the people on my route. We were in this together. That reassured me. My customers were of all ages and backgrounds, and they reacted calmly and thoughtfully. I remember the crestfallen faces and a lot of Oh-My-Gods. Everyone talked about the people who died – in the trade center, on the planes. They put themselves in their shoes.

I have fond memories of all my customers. Even the one who, on that very day, bad-mouthed his fellow Americans.

He stood in front of the mounted TV on the wall of his fish market and said they got what they deserved. They? The victims, he said. He kept staring up at the screen and mocking those who perished.

I freaked. Maybe some had cheated on their taxes, coveted their neighbors’ goods, and lied to their bosses, wives, and husbands. But to say death was well deserved was beyond offensive. I wanted to confront him, maybe sock him in the mouth. It wouldn’t have been out of character for me then.

But I didn’t. Instead, I dropped off the dishtowels, the aprons, and exchanged his dirty dust and wet mops for clean ones. That day I serviced the customer sans a smile and issued a receipt. I went back out to my van, still seething.

But then I found myself recalling the time I was stationed at Fort Polk, Louisiana. I befriended a number of my fellow soldiers. One of those in my Army platoon was a soccer-loving troop named Bacary Sambou, born in Senegal. He was a good soldier and a practicing Muslim. He observed Ramadan, faced Mecca when he prayed, and planned on making a hajj, a pilgrimage to the site of the Kaaba, the holy shrine said to have been erected by Ishmael’s father, Abraham, in Mecca. He often wore a cap called a kufi. The dude in the fish store that day wore a kufi also, but it was a different color. I don’t know for sure if the latter was a Muslim like my battle buddy, but the thought crossed my mind.

I’m not saying that I didn’t fight the man in the store because he wore a cap similar to the one Sambou wore. But I am saying that the cap invoked a memory of Sambou that made me feel ashamed of my anger about the fish-store owner’s words.

If I hated dude from the fish store, I’d be like the soldier who shared a room with Sambou. It upset me that the roommate, a holier-than-thou type, complained that Sambou washed his feet in the sink instead of the tub and ridiculed him for his religious beliefs. Sambou didn’t trip. He knew his roommate’s comments were made in ignorance. People say things in ignorance all the time. I’m guilty of it, too. So was the owner of the fish market.

Sambou always found the strength to turn the other cheek.

The more I thought about it, the more it occurred to me that I was wrong for hating both the roommate and the dude at the fish store. People are going to do and say things that ruffle our tail feathers all the time. Period. They had a right not to empathize, not to mourn.

My routine after servicing the fish market was to browse the funk section at V.I.P. Records on Pacific Coast Highway and Martin Luther King Boulevard (a store that is, sadly, no longer there). But on that afternoon, I drove the van straight back to the plant, and decided to call it a day. Part of me still was angry, and I can remember thinking that I could crash a plane into the fish store. An eye for an eye and a tooth for a tooth, Hammurabi’s stele says.

But, as we know all too well now, after 14 years of war, that’s how trouble starts. How about turning the other cheek once in a while?

Turning the other cheek means not attacking your neighbor for minor offenses. It also means not wishing the annihilation of people on the other side of the world, even for major offenses. Uncle Sam was slapped hard in the face that day. So was I. But rather than retaliating, maybe it’s best to keep driving, head home, and try to understand.

That dude from the fish store wasn’t one of the hijackers. He wasn’t responsible for staining the U.S.A’s social fabric with blood on September 11, 2001. It’s possible that stain is here to stay. But the stain the fishmonger left can be wiped away, forgotten, overcome.