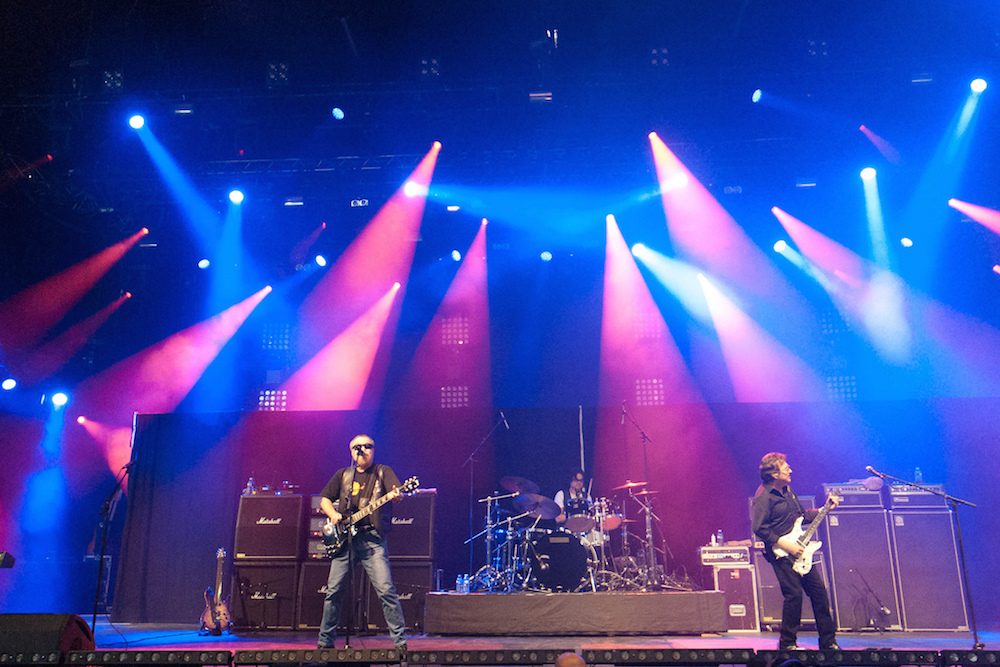 On a balmy evening last month, I sat on a beach in Santa Cruz and watched the five black-clad members of Blue Öyster Cult stride onto a stage and launch into a raucously chugging rendition of “OD’d on Life Itself,” a hit from an album they recorded 42 years ago. When the song was over, front-man Eric Bloom started to describe how the lyrics for their next song, “Career of Evil,” were written by rock legend Patti Smith—then stopped himself mid-spiel when he realized “Career” wasn’t the next song planned.

“Maybe it would help if I looked at the set list,” the 70-year-old joked.

For rock legends that have been around as long as Blue Öyster Cult, going into autopilot on occasion is certainly understandable. BÖC released their best-known song—the cowbell-heavy paean to death and eternal love, “(Don’t Fear) The Reaper”—in 1976. They stopped putting out new albums in 2001, and rarely perform anything that was composed after 1983. But they still tour heavily every year, even though the current lineup is down to just two of the original members. In 2014, the band played 55 gigs. This year, they’re slated to play even more.

More than ever, rock bands that saw their heyday decades ago are strapping on their guitars and squeezing into their leather pants in order to strut back on stages around the world. Groundbreaking British punks The Damned just completed a trek across America, playing to packed houses of rabidly moshing fans. Diehards Motörhead are powering their way through a U.S. tour (to be followed by a European one), when they’re not canceling shows due to their bassist’s health issues. Aging hair-metal godfathers Mötley Crüe are currently in the final legs of a swan-song tour, and the Canadian trio Rush just completed a 40th anniversary tour.

Often, these bands seem to approach nostalgic tours as the most expedient way to make bank; choice seats for top acts—Fleetwood Mac, Elton John, the Rolling Stones, and Stevie Wonder—can run in the hundreds of dollars. For every rock-togenarian flush with cash, there are plenty who genuinely need concerts to eke out a living. (With digital music so freely and widely available, hardly anyone makes money off sales or royalties these days.) Consider the sad case of Dick Dale: The guy who practically invented surf guitar has a myriad of serious health issues, including renal failure and the aftereffects of two bouts of rectal cancer, and has to tour relentlessly in order to cover the $3,000 he needs each month to pay for his medical supplies. He plays in excruciating pain while wearing a colostomy bag.

After reading about Dale’s plight, I might make the extra effort to see him when he passes through the Bay Area, where I live—and not just because I feel sorry for him and think that he needs my money. No, in reading reviews of the guitar legend’s recent shows, it sounds as if he’s literally giving it his all, resulting in some truly incendiary performances from the 78-year-old. And that’s the thing: Most aging artists still seem to genuinely enjoy trotting out their old hits for audiences, who are thrilled to relive the music of their youth and pay a premium for the pleasure.

Back on the beach at the Blue Öyster Cult show, the audience was an eclectic crowd of summer fun-seekers of all ages, skewing toward the well-over-40 set. Younger audience members who might not know BÖC beyond “Reaper” were maybe just catching a break from the cotton candy and roller coasters on the adjacent boardwalk. Graying t-shirted dudes ensconced in beach chairs, meanwhile, were clearly longtime fans of the band. One intoxicated biker-mama wobble-danced on a hill and kept shouting “Godzilla!” before every song.

So what’s in it for them? I’m not quite in the demographic of the “Godzilla” screamer, but I’ve attended hundreds of concerts, as a lifelong music fan and a freelance journalist since the mid-’80s. And while I certainly go to my fair share of performances by current artists, I find myself often drawn to rock revivals—shows put on by rock stars who are just a few years younger than my dad.

Partly the reason I go to these shows is to call back my earliest days as a music lover. Rock icons like Rush, the Who, Kiss, and the Rolling Stones provided the foundation for my lifetime of music fandom, and the chance to revisit such formative faves is often irresistible. I’ve since moved on through punk and post-punk into more esoteric and experimental realms, but I still vividly remember purchasing my very first albums by those groups, and the countless hours I would spend happily listening to them, bouncing around my parents’ basement rumpus room in full-on teenage air-guitar geekdom.

Recently, I revisited Rush’s A Farewell to Kings, a 1977 album I hadn’t heard in decades. What a flashback it was: the chiming chorus-laden guitar chords, audaciously complex drum workouts, sci-fi sound effects, and epic progressions on tracks like the 11-minute “Xanadu.” Even the cheesy state-of-the-’70s synths sprinkled throughout and Geddy Lee’s high-pitched vocals brought back warm memories of raptly listening to the LP via headphones jacked into my ’70s-vintage Sears combo stereo. It was like time-jumping back to re-encounter my teenage self. The house and the world I inhabited in Massachusetts at the time. The friends I would voraciously listen to records with, back in a pre-earbud era when we actually did that. The nerdy rock-star aspirations the music would soundtrack. It all seems so distant now, but it was a vital experience that molded who I am today.

Big names in rock have been packing it in or shuffling off mortal coils for decades, but I now find something especially poignant about watching the heroes of my youth approach their expiration date. Perhaps the fact that groups I called my favorites as a teenager are nearing their demise invokes my own mortality. Or maybe I’ve just arrived at a nostalgic time that happens in everyone’s life, when artists they loved all seem to be approaching their final victory lap. I feel compelled to see those bands I grew up with one more time, in part because there’s that nagging fear it might be the last opportunity. But seeing these bands also fills me with genuine joy. I can honestly say that some of the best shows I’ve seen in recent years were courtesy of bands I loved ages ago.

In the end, perhaps that’s all that truly matters—that the performer and the audience have a mutually beneficial experience, an ecstatic event that both parties can revel in. I sometimes wonder if it’s time for me to say enough already, to focus on seeing younger artists and stop going to watch my teen idols gradually ossify onstage. But then I think of the several minutes of six-string pyrotechnics Blue Öyster Cult’s 67-year-old guitarist unleashed at that beach show, just before they played “(Don’t Fear) The Reaper.”

If the grizzled warhorses keep mustering up something I enjoy, I’ll continue to give them my time and money. As some wise old men once said, “it’s only rock and roll—but I like it.”