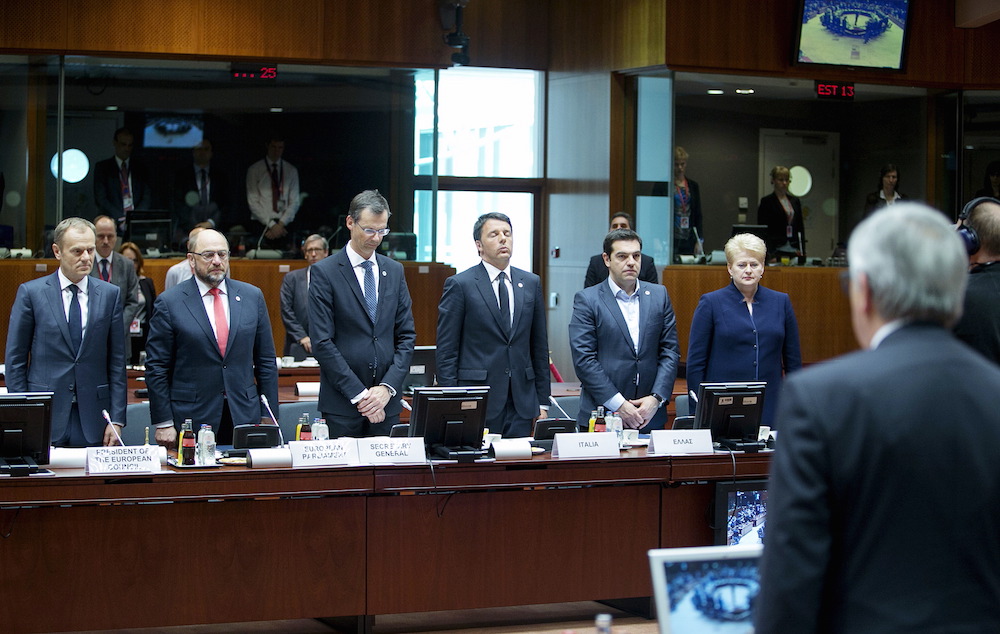 Refugees cling to crowded boats and cross borders by train and by foot, unsure of whether they will be met by unyielding force or warm empathy. It’s as if history reawakened in Europe over the past few months, or arrived on the road from Damascus, to test the West’s idea of itself.

Now the crisis is forcing the people of Europe to decide not only the fate of millions of (mostly) Syrian refugees, but also the fate of their Union.

At the most prosaic level, the urgent question is how to alleviate the suffering of the approximately 4 million Syrians displaced from their homes by a horrific civil war. After initially overwhelming Syria’s neighbors, an increasing number have undertaken the arduous journey to Europe, seeking asylum.

These waves of Syrian refugees are coming ashore in a Europe still frayed from wrenching debates over its shared currency, the debts of its weakest member states, and the appropriate response to Russian aggression on its periphery. The refugees are like house guests arriving in the awkward aftermath of the continent’s family feud and threatening, through no fault of their own, to exacerbate it.

Under different circumstances, this should have been the European Union’s finest moment. The “European Project” of an ever closer union—as EU insiders are fond of describing it—is the most daring sovereignty-pooling, one-for-all-and-all-for-one cross-border experiment of modern times. The EU’s goal is nothing less than a harmonious and prosperous state of being in which individual member countries transcend their baser nationalistic impulses for the common good—and for their redemption after two world wars and the unparalleled misery they wrought. If humanitarianism and a fervent embrace of international law have a home, it should be in Europe.

In good times and in bad, the Union’s well-intentioned ruling technocracy likes to exude dispassionate competence and a penchant for proper process. So, in the anodyne eurospeak of Brussels, the Greek and other debt troubles were supposed to be governed by the “Maastricht criteria” (which established permissible debt and deficit ratios for countries adopting the euro). And the response to a flood of refugees was supposed to be governed by such technocratic shorthand as “Schengen” (the agreement under which member states lowered borders between them) and “Dublin” (the convention dictating that refugees are to be considered for asylum in the first EU country they arrive at) and the broader writ of the 1951 Convention on Refugees.

But occasionally, the pesky people themselves step in to be heard, resentful of how much sovereignty they have surrendered to their shared “project.” The architects of the 28-nation European Union have always paid lip service to the legal maxim of subsidiarity—the idea that decisions should be pushed down to the lowest possible level of government—but of course not everyone interprets the principle in the same way. European elites assume that matters of migration and refugees are for the Union to handle as a collective, but many people across Europe—indeed, many national governments also—disagree. For them, there is no more local and visceral question than who is to be counted as belonging to the club. And so we see the fierce pushback against centralized attempts to dictate quotas of refugees to be accepted by each member nation.

Europeans have long fretted about a so-called “democratic deficit” within Europe, as more and more decision-making power gets shipped from national capitals to the EU bureaucracy in Brussels. But Ivan Krastev, a perceptive observer of European politics who chairs the Center for Liberal Strategies in Sofia, Bulgaria, describes a more nuanced gap created by “the Europeanization of policymaking and the re-nationalization of politics.”

Krastev believes the European Union has shown more resilience than people acknowledge. Despite the fact that Germany had plenty of commercial reasons to continue coddling Vladimir Putin’s leadership in Russia, Angela Merkel stood firm with other EU members in imposing sanctions on Russia in response to Putin’s Ukrainian adventure. Then the euro/Greek debt crisis failed to undo the eurozone, contrary to most economists’ predictions.

Now Germany is showing leadership within the EU in addressing the refugee crisis, mindful of its historical debt to humanity. Berlin has agreed to take in more than its fair share of refugees, while berating reluctant countries to the east to do their part.

The heart of the European Union remains its founding steel-producing core encompassing the northeast of France, Belgium, the Netherlands, and Germany’s western industrial heartland along the Ruhr and the Rhine. That’s the swath of Europe that hosted Waterloo, Verdun, and the D-Day landings and their aftermath. The periphery of the Union, by contrast, is feeling increasingly skeptical about how the EU is evolving, and about the price of membership.

Newer EU members to the east, like the Czech Republic, Hungary, and Poland, are shamefully balking at taking in their share of refugees. It’s as if this crisis, on top of the earlier Greek debt drama, punctured the eastern fantasy that membership in the European Union amounted to an affirmation, after so many years of enduring communist rule, that they had arrived at the end of history. For them, EU membership was about sharing dividends, not burdens, and certainly not the burden of being told what kind of people, and how many, to take into their relatively homogenous societies as refugees.

The ringleader for half-hearted Europeans remains the United Kingdom, perennially with one foot in and one foot out of the Union. It’s no surprise that this crisis and the ensuing hand-wringing about the state of Europe comes against the backdrop of British negotiations to reform the EU and seek more concessions and autonomy from Brussels. Prime Minister David Cameron has committed to a referendum on continued membership and is seeking the best possible deal for his country before he asks voters to weigh in on whether to stay or leave. More than ever, given the chaotic and divisive moment, the British may play a decisive rule in shaping Europe’s future.

Krastev believes that the future will bring more differentiation between the levels of engagement of Union members, which he considers healthy and necessary. But he doesn’t believe the peripheral members pose an existential threat to the idea or reality of a European Union. He’s studied the disintegration of the Soviet Union and other entities and found that historical collapses almost never occur because of some grand opposition scheme or from the poking of marginal members; they tend to happen as a result of complacency in the core of the region itself.

Krastev says the only thing harder to imagine than the Union’s continued viability after all these crises is the Union’s disintegration “There is a sense among some in Europe that it is time to go back,” he says. “But back to where? To 1936?”

What will the refugees do to Europe, its politics, and the continent’s historic integration? That’s the intriguing long-term question posed by the current crisis. The more immediate question is what Europeans are prepared to do for the refugees coming in need of asylum.

Answering that one shouldn’t be difficult.