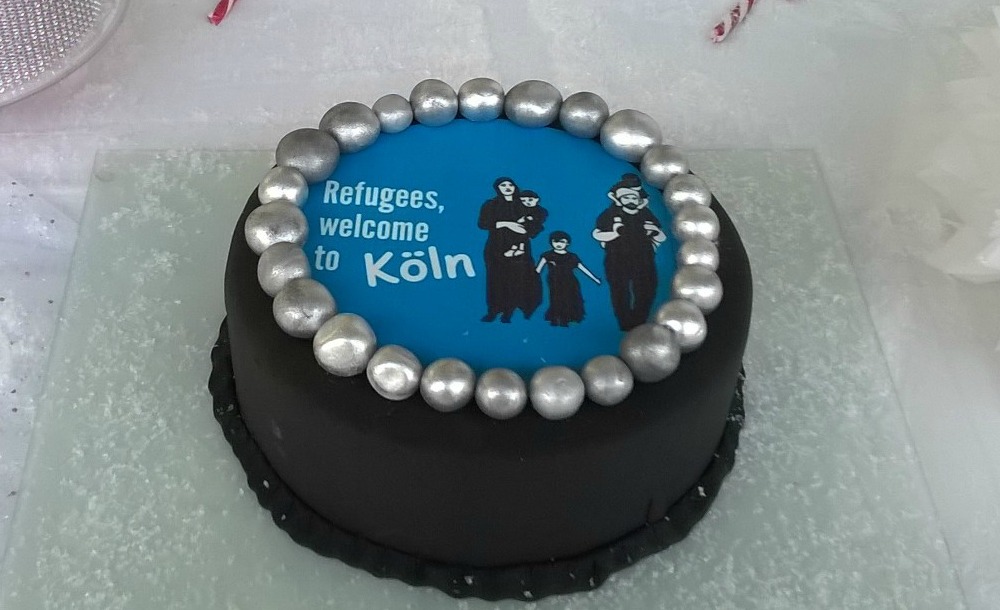 The pastry shop Cup Cakes Cologne has put two fancy cakes in its shop window. One cake shows German chancellor Angela Merkel in the style of a red angel. The other spells “Refugees welcome to Köln” (the German name for Cologne) in frosting and depicts a family walking to somewhere.

The cakes are becoming stronger political statements with each passing day.

The pastry shop is located in Ehrenfeld, a district of Cologne. The neighborhood of 100,000 has residents of many different backgrounds: workers and many former immigrants from Turkey, German bourgeois middle-class types, and various artists and creative people. Formerly a district known for metalworking, glass production, and electrical engineering, the area has been gentrifying for the past 15 years. There are traditional bars, old shops, and Turkish groceries next to newly opened galleries and cozy cafés. Cup Cakes Cologne is one of them. 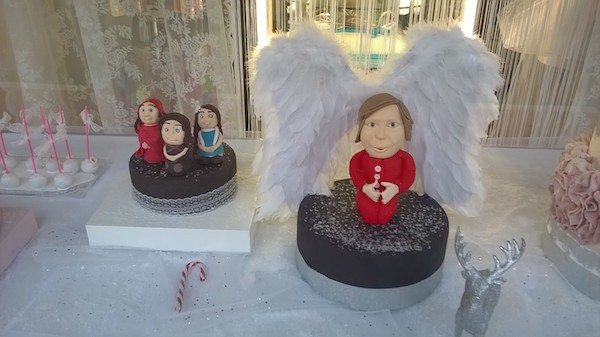 This cake decorated with German Chancellor Angela Merkel as an angel in red (right) makes a political statement in Cologne.

I’m writing this in response to an American journalist’s invitation to provide a local perspective on Cologne in the wake of the highly publicized events at Cologne’s central train station. Local, national, and international media have reported that hundreds of migrants and asylum seekers robbed, groped, and sexually assaulted women at the station on New Year’s Eve. Today, nearly a month later, there is not yet complete and clear evidence of all that transpired. On January 18 came reports that the federal police have officially identified 33 suspects. Amongst those were nine Moroccans, nine Algerians, five Iranians, four Syrians, one Iraqi, one Serb, one American, and three Germans. Twenty-three of these men were asylum seekers.

I have experienced the aftermath of these events from Ehrenfeld, which is my neighborhood, just three kilometers west from the site of the events that have so sadly become world-famous. Ehrenfeld is nothing like the transitory and rushed railway station. Here, people are not always moving; there is space and time to live, meet, socialize and discuss things. And Ehrenfeld is a pretty good microcosm of German society’s welcoming culture, its confusion, and the many contradictions that stem from the huge and ongoing influx of refugees into Germany.

In these past few weeks, I have made notes and observations about what seems different for Cologne. And here are five of them.

1. “Moroccan” has suddenly emerged as a new stereotype.

In the club where I play a sport twice a week, a few people have started making jokes about Moroccans. Last week, one of my teammates in the club accidentally broke a glass window, which made a lot of noise. The first thing another teammate said to him: “Oh, you are a Moroccan? You are making trouble?”

There was irony in his tone, but his comment is indicative of what has changed: Moroccans are now perceived as “troublemakers” especially since media reported that Moroccans organized the crimes of New Year’s Eve. Before the Christmas break, I never heard jokes or comments like this. How swiftly stereotypes take root in people’s minds!

2.  We have no choice but to be welcoming.

At the Forum of Welcoming Culture (Forum für Willkommenskultur), held in the Ehrenfeld district’s municipal hall every five weeks or so, less has changed. At the forum, residents from all walks of life volunteer to welcome refugees and present projects aimed at helping refugees. For example, there is one initiative that supports asylum seekers with official paperwork. Another organizes people to teach German, and still another brings together technicians to put up free wireless Internet in the asylum seekers’ shelters. At each forum, the mayor of Ehrenfeld makes a little speech.

On January 12, at the first forum of the new year, Ehrenfeld Mayor Josef Wirges spoke about the sexual assaults at the central station. According to the mayor, a Social Democrat, these attacks have changed things; many citizens of Cologne are concerned and feel frightened. He added that he assumed this would make it more difficult to get acceptance to open new asylum seekers’ homes in the neighborhood. But each week, about 300 refugees arrive in Cologne. And no female volunteer has ever experienced a sexual offense while helping refugees. So Mr. Wirges appealed to people: Carry on with welcoming refugees and explaining Germany’s values, including gender norms. There is no other alternative, he said. 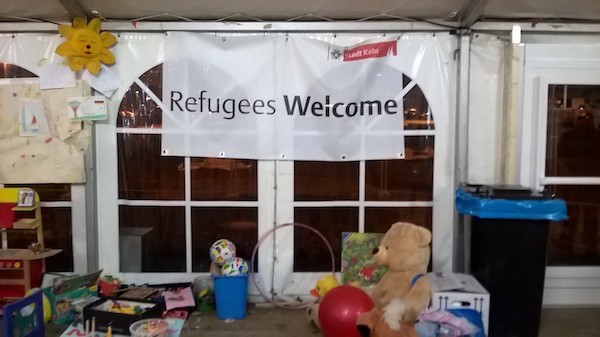 3. People are talking, and you can hear them.

In Ehrenfeld you can’t walk around or sit in a bar without overhearing the words “refugees” or “New Year’s Eve.” Many people are articulating their opinions, forcefully. It is a new phenomenon to hear such frank and open talk about Angela Merkel’s refugee policy, which many hold responsible for the events of New Year’s Eve.

The opinions are all over the map—there is no “one” opinion. A female friend of mine, who works with the public sector, tells me she is afraid of German culture being overrun by Islam. A hairdresser, originally from the former East Germany, says she wants the Wall to be built again around the whole of Germany to stop the Islamic State from invading.

But then there is the acquaintance of mine who says she’s willing to give away a certain amount of her salary to finance the costs for refugees. And a couple in their mid-30s, parents of a 1-year-old child, think that every country of the world is morally obliged to take in refugees; they say that Germany has a special duty due to its Nazi past that made so many Germans homeless. Then a 45-year-old German of Turkish descent says that all asylum seekers should be required to leave the country after being convicted of a crime.
And these are just a few of the voices I happen to hear in Ehrenfeld.

4. In Ehrenfeld, the concerns are expressed alongside evidence of the successful integration of people from Turkey and of Turkish backgrounds.

The first generation of Turkish migrants came to Germany during the 1960s as “guest workers.” Today, Turkish people and institutions are seen as key ingredients of German culture and society. In Ehrenfeld, this is as plain to see as stone buildings. On the main street Venloer Straße, you find many Turkish grocery stores where you can buy olives, herbs, and fresh vegetables. There are Turkish bakeries that sell very sweet pastries. And now, still under construction, is Cologne’s Central Mosque, commissioned by the Turkish-Islamic Union for Religious Affairs. Residents of Ehrenfeld are accustomed to the two minarets and the big white dome designed in Ottoman style.

I note this, and remind myself how important it is to think long-term. Today, a Turkish presence is taken for granted. In a couple of years, why shouldn’t the same feeling allow us to consider Syrian people and Syrian culture as part of our own?

5. I have searched myself for changes, too.

I am a young, female resident of Cologne, and many acquaintances from abroad and Germany have contacted me. They want to know what I think about the New Year’s events and they ask if I am afraid of becoming a victim of crime now.

I respond that right now I am not any more anxious than before December 31, 2015. This is because everything still looks the same not only in Ehrenfeld but also at Cologne’s central station, where I often get off the train during the week. Yes, there are more police in and near the station. Maybe I am a bit more nervous when I’m on the street on dark winter evenings. But when I walk through the busy and bright train station, I find it hard to believe that this place now seems to be known to the whole world.

I think that the events occurred as a result of a very unlucky coincidence—of complete police failure, criminal gangs that planned the robberies, and the dynamics of alcoholized male groups. Without a doubt, these assaults must be condemned and criminals must be convicted. But the assaults must not be used as a pretext for xenophobic or anti-Muslim politics that victimize people who are already fleeing their homes and coming to Europe after long and dangerous journeys. Unfortunately, the sexual assaults have been used to advance populist, anti-Muslim politics here in Germany and around the world—including by critics of the European Union in Britain and Poland, and by the U.S. presidential candidate Donald Trump.

We must not give into hysteria or fear. To borrow that famous British slogan, let’s all keep calm and carry on.