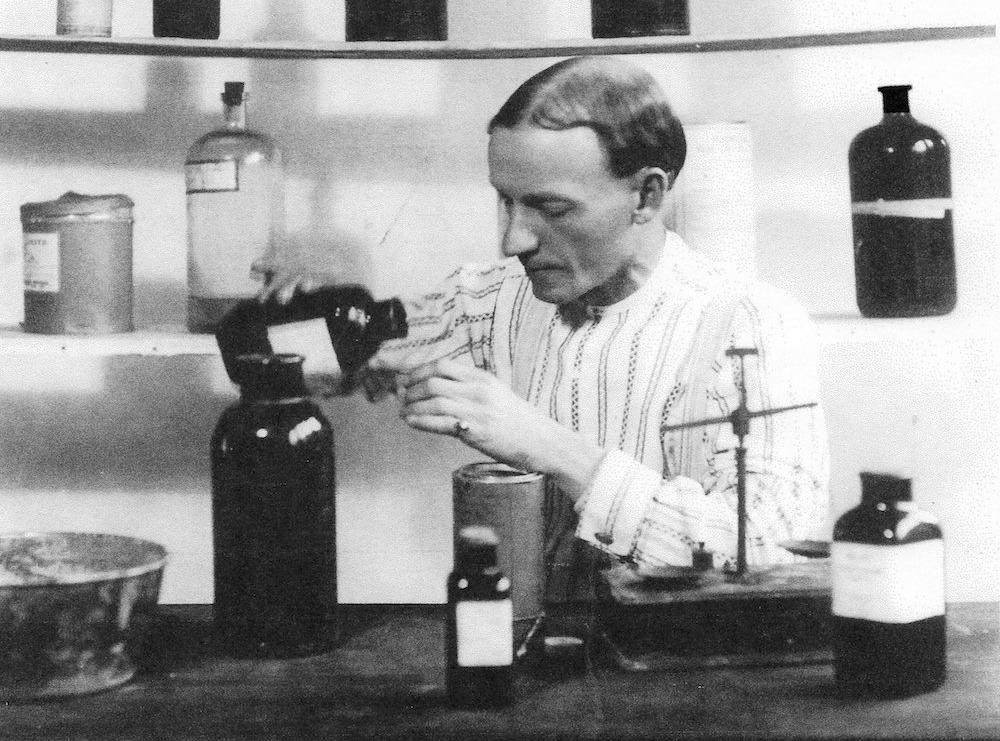 In the 1956 film The Rainmaker, a slick-talking stranger played by Burt Lancaster shows up in a drought-stricken town. Clad in a black cowboy hat and red neckerchief, he woos a desperate cattle-ranching family into believing he can make it rain.

Lancaster’s character is beefy and full of swagger, just as dramatist N. Richard Nash imagined him when he wrote the play upon which the film was based. But the real-life rainmaker who inspired Nash was quite the opposite.

Charles Mallory Hatfield was trim and partial to pressed suits and trilby hats that sharpened his already-narrow face and nose. He struck a studious humility that disarmed civic leaders and businessmen who would have been wise to any Burt Lancaster bluster. “I do not make it rain,” Hatfield would demur. “That would be an absurd claim. I simply attract clouds, and they do the rest.”

Hatfield was once the most famous rainmaker in America. His notorious “success”—“Hatfield’s Flood”—arrived in the form of extreme rains in January 1916 that burst through the dam at San Diego’s Morena Reservoir, killing more than 20 people and washing away roads, bridges, and homes.

The compelling mystery about Hatfield is not whether he brought the rain; meteorologists say “atmospheric rivers”—long streams of water vapor in the atmosphere that can stall over vulnerable areas—were likely to blame for Hatfield’s Flood. The great question in his life and work is also the central theme of Nash’s play: Did Hatfield believe in his own ability to milk the clouds?

Hatfield was born in 1875 in the rainmaking motherland of Kansas. During a crushing drought in the late 19th century, the state’s dry winds blew in some of the most audacious conmen of American history along with the tumbleweeds: Traveling rainmakers would charge up to $500 for a storm, brew chemicals in tents or train cars, and claim success for any rain that fell within many miles. (As meteorologists know, it’s always raining somewhere.) They hardly needed to advertise; credulous newspaper reporters did it for them.

Hatfield’s family moved to Southern California when he was a boy, and he shined in his first career, sewing-machine salesman. But his passion lay in picking apart the machine of the atmosphere. Hatfield read and re-read classic weather texts like Elementary Meteorology by William Morris Davis. The San Diego Public Library still has his well-thumbed, underlined copies. By 1902, he was dabbling in rainmaking at his father’s ranch outside San Diego.

The swirling steam of a tea kettle gave Hatfield the idea to climb a windmill at the ranch, heat some chemicals in a pan, and send the vapors ambling into the sky, Clark C. Spence writes in his classic history of American “pluviculture.” When a heavy storm descended after his first try, Hatfield was convinced either that he had figured out the recipe for rain—or could make people believe he had.

Hatfield turned professional on a public bet in Los Angeles, when he claimed he could draw 18 inches of rain to the city for the winter and spring of 1904 to ’05. L.A.’s annual average rainfall is 15 inches. In times of drought, the city can see as little as five. During what we now know as the El Niño cycle, L.A. can draw closer to 20. Ending an unusually dry decade, the winter of Hatfield’s bet was such a year.

Thirty L.A. business leaders pooled a total of $1,000 for Hatfield if he could draw 18 inches by May. Hatfield erected a 12-foot derrick in the San Gabriel Mountains above Pasadena. He set to work mixing his chemicals and sending them aloft. He explained his technique to the Los Angeles Examiner:

When it comes to my knowledge that there is a moisture-laden atmosphere hovering, say, over the Pacific, I immediately begin to attract the atmosphere with the assistance of my chemicals, basing my efforts on the scientific principle of cohesion. I do not fight Nature … I woo her by means of this subtle attraction.

After a dry Rose Parade on New Year’s, as requested by the locals, the Los Angeles skies rained furiously that winter. The last inch specified in Hatfield’s contract fell a month before his deadline. The triumph created demand for Hatfield and his rain derricks throughout the West, including Canada and Mexico. He was soon credited with filling the streams that kept local mines in operation in Grass Valley, California; replenishing the reservoirs of the Yuba City Water Company; and bringing rain to the parched badlands near Carlsbad Caverns.

The late Riverside journalist and historian Thomas W. Patterson, who wrote extensively about Hatfield and interviewed his family members, described him as scrupulous. He discouraged crowds from congregating around his towers. But those who caught a glimpse were mesmerized. Hatfield clambered across his scaffolds almost like a madman, pouring his concoctions, and keeping huge plumes moving until they evaporated. Patterson concluded that Hatfield believed in his abilities, and in the product that he sold.

The science and technology historian James Fleming argues Hatfield’s contracts gave him almost unbeatable odds. He always worked during rainy season, and his contracts extended over a hundred-mile radius, “which increased his chances of apparent success a hundredfold,” Fleming writes in his weather-control history Fixing the Sky. Hatfield’s most dogged detractors were the scientists at the U.S. Weather Bureau. Each time a newspaper lauded him, bureau chief Willis Moore sent scathing rebuttals from Washington. Back home in San Diego, the local weather bureau commissioner wanted him prosecuted for fraud.

When a heavy storm descended after his first try, Hatfield was convinced either that he had figured out the recipe for rain—or could make people believe he had.

Instead, the people of San Diego would credit Hatfield with the most copious rains in memory—and the city’s most devastating weather disaster. In December 1915, the San Diego City Council engaged him to conjure enough rain to not just fill, but overflow the Morena Reservoir. If Morena topped its banks by December 1916, the city would pay him $10,000. If not, he would be owed nothing.

During the first week of January in 1916, not long after he’d built his derrick and started brewing near the reservoir, the skies began to drizzle. The drizzles turned to steady rains. The rains turned to record torrents; more than 28 inches fell that month. Morena Reservoir overflowed. On January 27, the Lower Otay Dam burst, sending a wall of water into downtown San Diego that killed at least 22 people and washed out all but two of the city’s 112 bridges.

Armed vigilantes were said to have gone after Hatfield and his brother, who fled on horseback. When the pair returned to collect Hatfield’s money, the shrewd city attorney argued the deluge was “an act of God.” Hatfield filed a lawsuit. City lawyers said San Diego would pay only if he would sign a statement assuming responsibility for the flood and relieving the city of damages; some $3.5 million.

Hatfield never received his fee. But the publicity was worth more. For the next 15 years, Hatfield built his derricks around the American West and on a few international assignments, even if sometimes he cashed in on rains an inch below normal. In 1922, the New York Times ran a story about his trip to Italy to help break a drought: “He was anxious to explain his secret process to Pope Pius, and if the Pontiff agreed he would try to induce rain to fall on the Vatican gardens.”

If Hatfield’s methods were suspect, the concept was sound. Cloud-seeding—injecting clouds with silver iodide or other aerosols to make them form the ice crystals that then fall as snow or rain—can boost precipitation in clouds that were going to rain anyway.

Of course, it’s impossible to know whether it would have rained without a nudge. The most comprehensive study of cloud-seeding found that it increases precipitation by only 5 to 15 percent. Still, it is a testament to the value of water in arid regions that western state and local governments, utilities, agricultural consortia, ski resorts, and others have ongoing cloud-seeding programs to try and squeeze every possible drop from the sky. From rainmaking to reservoirs, to the $1 billion seawater desalination plant opening this year in San Diego County, all promises of water to quench drought require some magical self-belief; a suspension of the reality of living in arid lands. This is part of the American dream of the Big Fix—pervasive in our environmental history, the belief that an ingenious solution will come along to solve our water, land—and now climate—mistakes.

Hatfield died quietly at his home in Pearblossom, California, during a rainy El Niño winter in 1958. No one picked up the news of his death until four months later, when the city of San Diego tried to reach him—perhaps for a history project or a documentary.

The answer to the question of whether he believed in the rain-making power of his curious chemical concoctions went with him to the grave. It may be that Hatfield himself was not quite sure. And perhaps it didn’t matter, so long as others believed in him, and in America’s latest water dream.