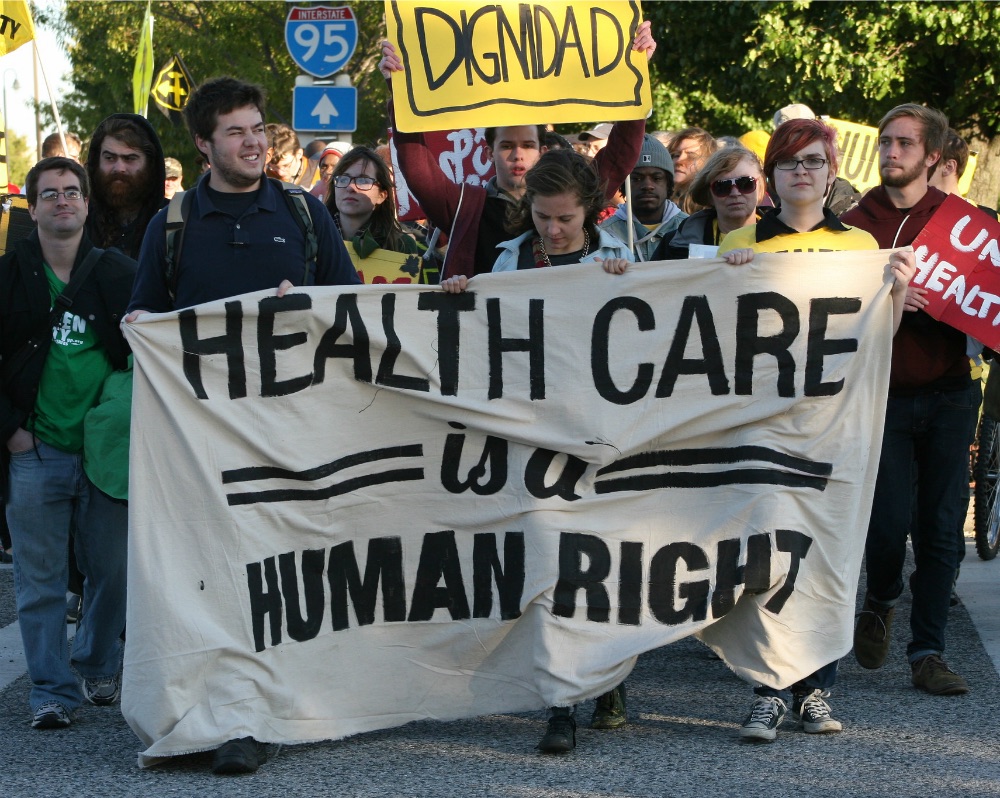 A national system in the U.S. is politically untenable

It depends on whom you ask

Health care systems can’t afford not to be national

Declaring care a “right” does more harm than good

For more than a century, America has argued about how to share the costs of health care. Drawing from new government-sponsored insurance programs in Germany and England, Progressive reformers made the America’s first serious push for compulsory national health insurance in 1915, on the grounds that it was the responsibility of an enlightened society: Illness was a major driver of poverty, so spreading the cost of sickness would benefit everyone by diminishing disease and dependency, right?

Not everyone agreed, of course. Government-sponsored health insurance would encourage freeloading, or at least result in a ton of bureaucracy, opponents contended. Why offer more power to the federal or state governments when most insurance could be handled privately?

Today, the debate rages on. While the 111th Congress passed the Affordable Care Act, which, among many changes, mandates that all Americans possess health insurance and requires private insurance companies to offer certain kinds of coverage, subsequent Congresses have voted to repeal the act. Even as Donald Trump has hinted at the value of national health care coverage, a spokesman has tried to clarify that he’s against “socialized medicine.” No one thinks that America’s health care system is perfect, but what really is the best way to for a country to treat its sick and pay for this treatment? Should nations try to partner with neighbors to create international systems, perhaps continent-wide, to ensure equal coverage for all? Or, conversely, should care be focused at the most local level, to be most nimble and creative?

In advance of a Zócalo/Arizona State University event on the best ways for countries to approach health care, we asked a variety of health-policy experts: Should health care systems be national? What are the advantages and disadvantages?

A national system in the U.S. is politically untenable

The concept of a national health care system is intrinsically attractive. Any uniform, standardized approach seems like it would be simple, efficient, and transparent.

Yet how in the United States—a country that intensely favors decentralization while harboring distrust for government control—would such a transformation occur? How would the losers be compensated—with the elimination of huge, powerful industries? Would the nation unequivocally benefit? Viewing how other countries (especially smaller and much less diverse ones) finance and organize care can be misleading and distracting.

A national system can mean many things with vastly different implications, for instance, Medicare for all (federal control), or all-payer plans like Maryland uses for its hospitals, in which all third parties pay the same rates for services. Specifics notwithstanding, a national health care system in the U.S. is politically untenable.

In the words of Brookings Institution economist Henry Aaron, “We know that single-payer mechanisms work in some countries. But those systems evolved over decades, based on gradual and incremental change from what existed before.” In contrast, the tens of thousands of pages that already exist to run Medicare, which itself is not singular given its private options, would need to be expanded perhaps tenfold. There would be fierce, perpetual food fights with health care lobbyists advocating “fair” payment for their specialty, and there would be no private sector to inform governmental policy-makers of essential price information. Nor would private companies develop care management processes.

The U.S. has a bloated, inefficient system that also happens to be incredibly innovative in seeking cures, new procedures, devices, and drugs. Rather than pine for a revolution that is not forthcoming, we would be better served by realistic solutions that decrease waste, especially administrative waste, and lessen overuse and low-value care.

Paul Hughes-Cromwick co-directs the Center for Sustainable Health Spending at Altarum Institute, in Ann Arbor, Michigan, where he leads outreach and business development.

It depends on whom you ask

The U.S. system of health care is so complex that you almost need a degree to obtain affordable coverage and understand how your insurance works. Its complexity is due to its multiple layers: federal and state policies governing public and private insurance, for-profit and non-profit insurers, providers such as hospitals and physicians responding to market incentives, pharmaceutical companies’ marketing and drug-pricing strategies.

Does this complex system work? Yes. Does it work well? That depends on whom you ask.

The direct opposite of America’s ad-hoc health care system is a centralized, government-organized health care delivery system such as the National Health Service in United Kingdom. NHS lacks much of the complexity of U.S. health care since the program is primarily funded through general taxation and most of the care is provided for free to U.K. residents. And because the program employs providers, it can centrally monitor their performance and guarantee their availability. The result? Health care spending is nearly half of that of the U.S.

But are U.K. residents happier? In 2014, NHS indicated that 65 percent of U.K. citizens are satisfied with its services. That same year, a Gallop poll indicated that 66 percent of Americans were satisfied with the U.S. health care system. While national systems such as NHS do a better job of providing access to everyone, they might exert tighter controls on use of specialty and high-cost services. (And the NHS still faces similar challenges to the U.S., including rising costs for care, workforce, and an aging population, among others.) The U.S. health care system, meanwhile, provides more freedom, but is harder to navigate. Which is better depends on your point of view.

Government-run, single-payer health care remains the American Left’s impossible dream. Progressives have lined up behind Sen. Bernie Sanders’s presidential campaign partially because of his call for “Medicare for All.” Campaigns for state-level single-payer systems have taken root in 16 states within the last year.

In Canada’s single-payer system, the median patient must wait more than 18 weeks to receive specialty care following referral from a general practitioner. Wait times for MRIs are more than eight weeks; for CT scans, they’re almost four weeks. As a native-born Canadian, I’ve witnessed rationing firsthand. My mother died from colon cancer after doctors denied her colonoscopy so younger people could go first.

Authorities in the United Kingdom routinely refuse to cover cutting-edge drugs because of their cost. This past September, the country’s National Health Service declared that it would no longer pay for 17 cancer drugs treating 25 different indications.

Single-payer health care is also expensive. Britain’s National Health Service is facing a 2.3-billion-pound deficit over just the first nine months of this past fiscal year. Earlier this year, a report revealed that 132 of England’s 138 hospital trusts were in the red.

Legislators in Sanders’s home state of Vermont succeeded in passing a single-payer plan in 2011—the first in the nation. But by the end of 2014, Gov. Peter Shumlin had abandoned it. The projected cost of the plan was almost equivalent to the state’s entire budget.

Nationalized health care may nominally “guarantee” everyone coverage. But as Britain, Canada, and other nations with government-run systems illustrate, access to coverage does not mean access to care.

Sally C. Pipes is president, CEO, and Thomas W. Smith fellow in health care policy at the Pacific Research Institute. Her latest book is The Way Out of Obamacare (2016).

Health care systems can’t afford not to be national

Maybe the better question is, how could a health care system afford not to be national?

The U.S. already has a national health care system. In fact, it has two: Medicare for the nation’s seniors and Medicaid for its poor. There is almost universal agreement that this country’s patchwork system of care for everyone else is in dire need of reform. For those who can afford Cadillac health insurance, the system functions just fine—access on demand, top care, good results. But for far too many people, health insurance is too expensive, access can be difficult, and care is spotty. And the huge financial cost the system extracts is untenable. Even those most opposed to Obamacare feel compelled to offer up some form of system change.

Yet the successes and struggles of Obamacare provide a mirror of what’s possible—and what’s not—for the future of any vision of national health care. The successes—millions more people insured, countless new initiatives, and, not often noted, new approaches to care being taught in the nation’s medical schools—are significant plusses. Now the nascent reform must continue to grapple with huge questions:

Access. Does having an insurance card get you in to see a doctor? In too many places, the answer is no, or not without difficulty.

Cost. Despite the reform’s attempts to lower the dollars spent on care, significant reductions could take decades. With the prospect of a growing-older society, there will be enormous pressures to confront.

System. The biggest question: how to bring order to the competition among huge players—hospital systems, physician groups, insurance plans, and Big Pharma? They, along with small and large business, have dominated the health care landscape in this country for decades and all are positioning themselves for advantage in whatever new system ensues.

Declaring care a “right” does more harm than good

One of the worst ways to think about health care reform is to pose the false choice of “Should health care be a right or a privilege?” Declaring health care to be some sort of legally enforceable “right” degrades quality and causes more patients to not get the treatment they need. In most nations, government attempts to make health care a “right” have suppressed the development of new medical therapies. In the United States, such efforts have fueled problems with pre-existing conditions (by favoring employer-sponsored insurance, for instance, which disappears when workers retire or get too sick to work), high prices for medicines and procedures, and high health-insurance premiums, while also discouraging innovations that would solve these problems.

The goal of health care reform should be a system that constantly makes health care better, more affordable, and more secure. The best tool humans have devised to bring goods and services within the reach of more and more people is a market system. A market system rewards innovators who find ways to make goods and services better and more affordable, bringing health care within the reach of people who could not previously afford it. It leaves the rest of society wealthier and better able to care for the smaller number of vulnerable patients who remain.

In America, low-cost retail clinics, integrated health systems like Kaiser Permanente, and falling prices for services like cosmetic surgery and Lasik show that market forces are trying to break through and improve health care for patients. While there will always be some unmet need under any system, the great virtue of a market system is that it uses innovation to fill in the cracks, so that fewer patients fall through.

Michael F. Cannon (@mfcannon) is director of health policy studies at the libertarian Cato Institute and co-editor of Replacing Obamacare (2012).