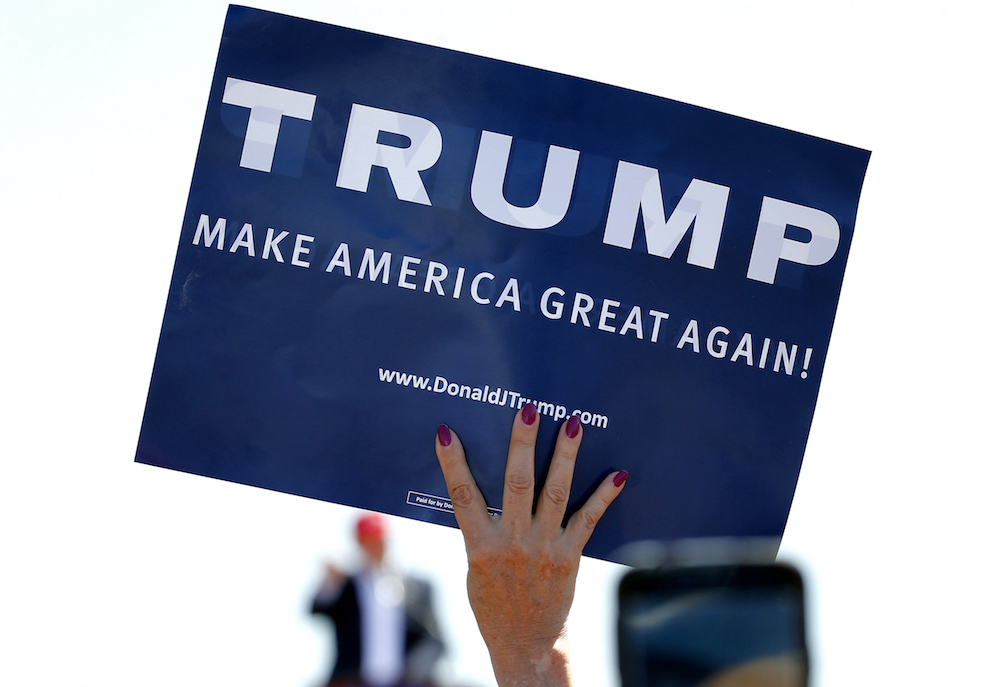 Nostalgia ain’t what it used to be. Once upon a time, I considered longing for a long-lost past a relatively innocuous exercise. I don’t really go for the iconic schmaltz of Norman Rockwell paintings, but I never thought that idealizing days of yore could be a dangerous activity.

But that was before Donald J. Trump launched a presidential campaign on the promise of making America great again.

On the surface, the real estate mogul’s pledge of renewing national greatness doesn’t seem so bad. After all, like any politician, he seems to be simply appealing to national pride and ambition. Couldn’t that just get our collective competitive juices flowing and produce more gross national excellence?

Making a comeback or triumphing over one’s hardships requires more than nostalgia. Sometimes it requires the ability to visualize—literally—what a better future would look like. In a brilliant 2014 essay on beauty and justice, Harvard art historian Sarah Lewis explores the power of images to propel people forward. She cites the example of abolitionist Frederick Douglass, who decided to seek his freedom from slavery after spending too many Sundays feeling taunted by the gentle, unhindered movement of the sailboats on Chesapeake Bay.

Douglass would later argue that those most capable of inspiring change—poets, prophets, and reformers—are those who can conjure images that capture the contrast between what is and what could be. “They see what ought to be by the reflection of what is,“ he said, “and endeavor to remove the contradiction.”

By contrast, the image of the future Donald Trump is offering is not a reflection of what is, but rather of what may or may not have been. He hearkens back to a past in which Americans—or at least some of them—enjoyed unchallenged economic and cultural dominance. While it isn’t particularly clear what era he’s nostalgic for, “Making America Great Again” is less about achieving a shiny new vision as it is about restoring a gauzy old one. He is propelling us backwards.

“Making America Great Again” is less about achieving a shiny new vision as it is about restoring a gauzy old one.

The late Russian-born novelist and playwright Svetlana Boym made a distinction between two types of nostalgia, reflective and restorative. While the former tends to be wistful and dreamy (think of Reagan’s “Morning in America” imagery), the latter, which lies at the core of many modern national and religious revival movements, is deadly serious.

Restorative nostalgia has two essential plot lines, the first being the return to a hallowed past and the second being the conspiracies that explain why that past was lost. As such, these nostalgic movements come to be more about the search for scapegoats than they are about recapturing any sort of tradition. They’re particularly attractive to groups who feel victimized by change in the modern world.

Of course, Trump’s politics of nostalgia certainly has its cast of villains, including Mexicans, Muslims, China, and Japan. His rhetoric of restoration is clearly more focused on dealing with enemies—both within and outside our borders—than it is on inspiring or building the intrinsic capacity of the people whose greatness he says he hopes to reclaim.

Such aggrieved nostalgia may feel novel in a U.S. presidential race, particularly given the collective pride in our unwavering focus on the future. Yet it is all too common around the world. It underlies Islamist movements’ anger towards the West, Vladimir Putin’s project to restore Russia to its rightful place in the world, and the more virulent strains of Chinese nationalism. In places like the Balkans, a victimized sense of nostalgia is practically a birthright. Hence one of the paradoxes of the Trump phenomenon is that in seeking to “Make America Great Again” by invoking a litany of wrongs committed against us, he sure is making America more like the rest of the world.

The most extreme form of restorative nationalist nostalgia could be seen in Adolf Hitler’s Germany. While anti-Semitism had existed for centuries, Hitler employed what UCLA historian Saul Friedländer has called “redemptive anti-Semitism,” a national salvation myth that held that Germany’s prominence could only be regained through the removal of Jews. Since Hitler blamed Jews not only for Germany’s defeat in World War I but for the subsequent collapse of the monarchy, he argued that their expulsion—which later led to genocide—was necessary to make Germany great again.

I’m not implying that Trump intends to commit mass murder. But the rhetorical mechanism he employs is essentially the same. Far from being a quaint stroll down memory lane, the politics of nostalgia is a recipe for resentment, and potentially, revenge. It’s also a perfect way to blame others for your lot in life.