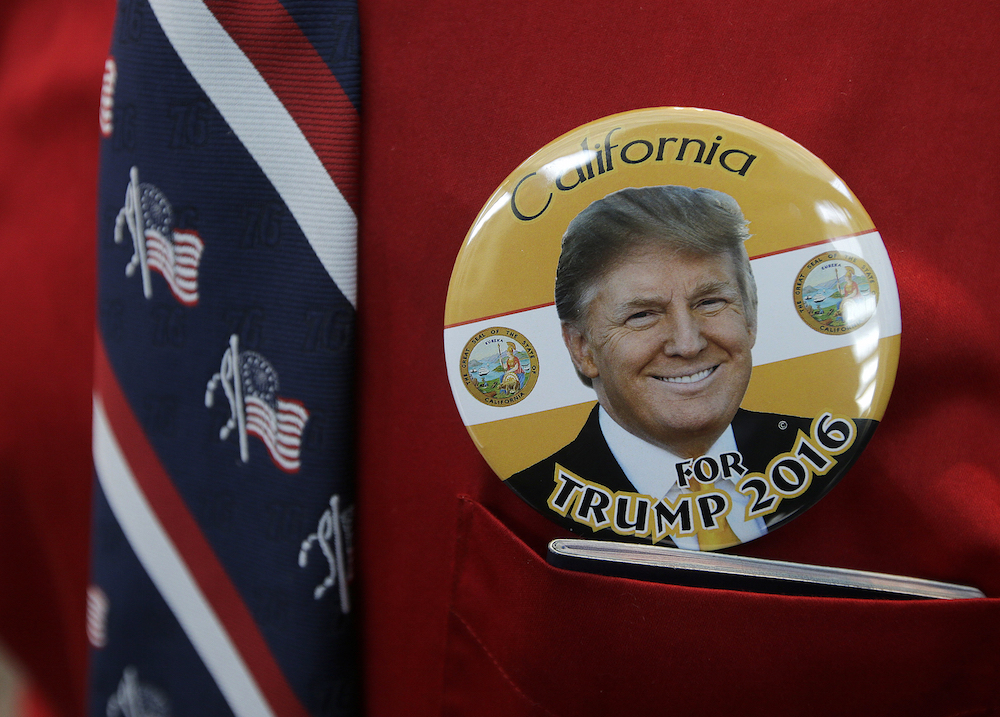 Three out of every four Californians have an unfavorable view of Donald Trump, the presumptive GOP nominee for president. In a poll taken before his opponents dropped out, four of 10 California Republicans would be “upset” if he won the nomination.

California has been making national headlines with bold liberal policies in the past few weeks, so the state’s coolness to Trump—and the antipathy on display when he visited the state two weeks ago—might seem unsurprising. After all, on Trump’s signature issues–demonizing Latino immigrants and building a wall to keep them out—he is far outside the state’s mainstream; a recent poll shows that less than a quarter of Californians agree with his stances on “illegal” and Muslim immigration, and just 16 percent of Californians support widespread deportations.

But Californians who might be tempted to pat themselves on the back for their state’s open-mindedness should make no mistake. When it comes to insulting immigrants and building walls to keep them out, the Golden State started it.

Today’s anti-immigrant campaigns began not with New York billionaires or white conservatives in rural America, but with middle-class professionals, both Democrats and Republicans, in California. For most of U.S. history, fomenting anti-immigrant sentiment was a project of labor unions and working people who feared job competition from newcomers. In these movements—particularly those directed at Chinese people in the 19th century—California was a national leader.

Trump draws votes mostly from a 21st-century version of that working-class demographic. But his rhetoric on immigration is much newer—it comes straight from an anti-immigrant movement begun 25 years ago by educated, mostly white California suburbanites from across the political spectrum.

Trump has famously said he will force Mexico to pay for a new wall on the entire southern border through a variety of pressure tactics, among them increasing fees on all Mexican border crossers. While this idea may sound very Republican today, my University of Oregon colleague, the political scientist Dan HoSang, has shown that it originated with our own Democratic U.S. Senator Dianne Feinstein, former mayor of liberal San Francisco.

In 1993, the newly elected Feinstein became the first California senator in decades to make immigration control a major political issue. She wrote in the Los Angeles Times that “illegal” immigrants cost the state billions and filled its jails with criminals; she brought that same message to talk shows and the U.S. Senate. How to crack down? Feinstein’s proposal: Charge a $1 toll on anyone entering the country and use the money to increase funding for the Border Patrol.

When it comes to insulting immigrants and building walls to keep them out, the Golden State started it.

Trump also wants to end the birthright citizenship that is currently guaranteed by the Constitution. That idea first picked up steam in California, too. It was proposed in the early 1990s by Simi Valley’s Republican Congressman, Elton Gallegly, and soon gained the support of a neighboring congressman, Democrat Anthony Beilenson.

I was in high school in Los Angeles in 1994 when California voters overwhelmingly passed Proposition 187, a ballot initiative to deny public services, including education and health care, to undocumented immigrants. In hindsight, most remember this as the signature issue of Republican Governor Pete Wilson. Yet observers at the time noted that Wilson had previously focused on ensuring that the state’s agricultural interests had as many immigrant workers as they needed. It was actually the stand of the liberal Feinstein, a fierce political rival of Wilson’s, that “inspired” the conservative governor’s turn to a strongly anti-immigrant agenda.

Furthermore, the grassroots energy for the proposition did not come from the working-class white folks that support Trump today. Rather, both HoSang and another scholar, Robin Dale Jacobson, found that Proposition 187 activists were middle-class professionals: accountants and engineers, secretaries and educators. Their rhetoric did not focus on job competition as earlier anti-immigrant movements in the United States had. Rather, they decried “billions of tax dollars” spent on public services for immigrants and accused them of importing “rape, robbery, assault”—the same allegations Trump is making today.

California’s politics may have changed since those days, but many Californian people and ideas of that time, having relocated to Trump country, are part of today’s anti-immigrant campaigns. Trump swept Georgia and Alabama, two states that passed high-profile anti-immigrant laws in recent years, and whose immigration histories I have spent a decade researching. Those laws bear the fingerprints of California. In Alabama, the anti-immigrant law was pushed by the Alabama Federation of Republican Women—whose president, Elois Zeanah, was a longtime city councilwoman and mayor in her 25-year home, the L.A. suburb of Thousand Oaks.

As for Georgia, its grassroots anti-immigrant movement began just a few months after Proposition 187’s passage, in the fast-growing Atlanta suburb of Cobb County. Members of a local neighborhood group borrowed the pro-187 campaign’s language in a letter-writing campaign to elected officials: Immigrants “drain our economy,” “crowd our school system,” and are responsible for “criminal activity.”

Most of Cobb’s residents at that time were interstate transplants, including thousands of ex-Californians. One of them, a former resident of Los Angeles’ San Fernando Valley, wrote to his mayor: “At one time The Valley was 90+% white. The streets were very clean. Crime was very low. All of that has changed. During the last 10 years the Valley has been invaded by people from Mexico and all points south. … It is happening right here in Georgia. We need to stop it before it gets out of hand.”

Cobb remains the hub of the state’s anti-immigrant movement: one of the first Georgia counties to pass a local anti-immigrant ordinance, and home to the state’s most prominent anti-immigrant group, the Dustin Inman Society. The society’s mission? To prevent the coming of “Georgiafornia”—“the chaos that has befallen the once wealthy and desirable state of California,” thanks to “illegal” immigration.

Californians can be proud that, as a whole, they no longer support the anti-immigrant agenda. But before they smugly dismiss nativism as a faraway phenomenon in which they are not implicated, Californians should remember their own recent history. Anti-immigrant sentiment has been present throughout U.S. history. But it was Californians who renewed it at the end of the 20th century, giving it the legs Trump has commandeered on his run into the 21st.