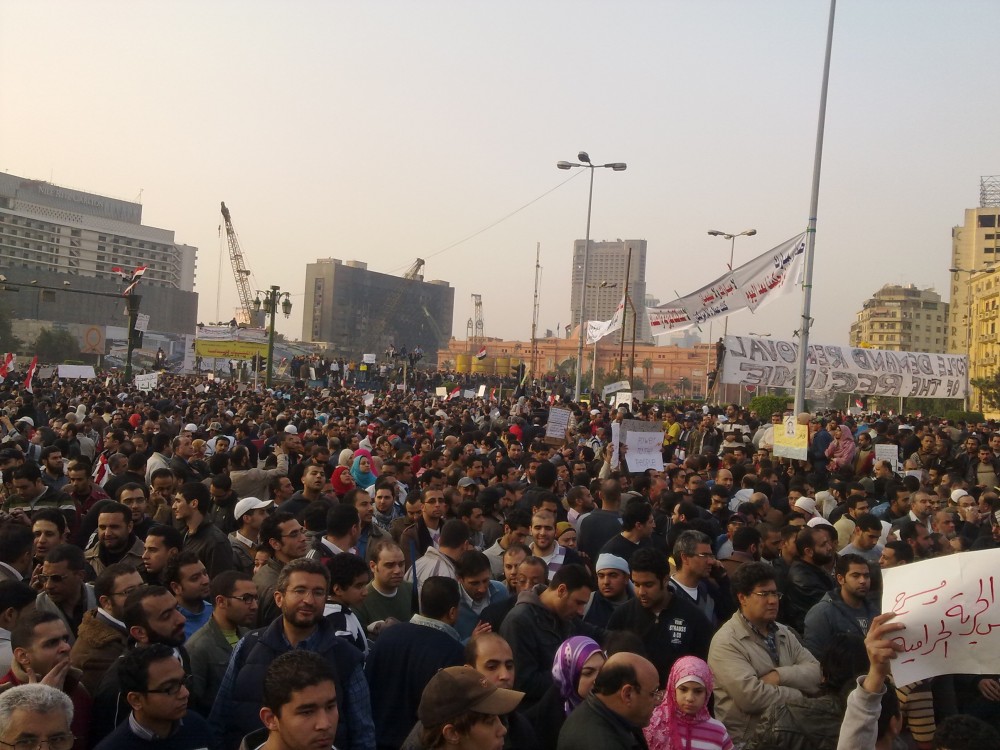 On the night of Barack Obama’s election in 2008, I stood outside a dormitory at the University of Texas at Austin, debating two Egyptian bloggers about Obama’s win.

About two months ago, I was watching another U.S. election season when I learned that one of those bloggers had been sentenced to two years in prison in Egypt. Ahmed Naje was convicted of offending “public morals” and “spreading licentiousness” after an excerpt from his graphic novel was published in a local newspaper. The novel, which includes sexually explicit content, had already passed a censorship office in 2014. But an individual took Naje to court, alleging that the novel caused the plaintiff’s blood pressure to fall and his heart to race.

I first met Naje and his best friend, Mahmoud Salem, back in 2008, when I spent a few weeks in Cairo interviewing them along with six other Egyptian bloggers. Under a program funded by USAID and run out of the American University in Cairo, the eight men and women took courses on the U.S. electoral system and then traveled to the U.S. to cover the elections. I reported a story about them for The National, a news magazine based in Abu Dhabi, following the bloggers from Cairo to Austin and Lincoln, Nebraska.

They were experienced, savvy observers of their country and of international affairs. They had blogged about issues facing women, human rights abuses and the struggles of civil society. Wael Abbas, who reported on his blog about police brutality and voting irregularities, received awards from Human Rights Watch and the International Center for Journalists and was recognized by the BBC as one of the Most Influential People of the Year in 2006.

The rich blogging culture in Egypt has been instrumental not only in breaking news but also in pushing back against free speech restrictions. But bloggers often paid a heavy price for their outspokenness. Salem, who blogged anonymously on “Rantings of a Sandmonkey,” later revealed his identity when he went public with videos showing how he had been beaten by the police.

Back in 2008, I was curious about what they thought about the U.S. political process as Bush’s term came to an end and the U.S. elected its first African-American president—whose feel-good campaign focused on “hope” and “change.” The bloggers in the USAID program spoke to elected officials in the nation’s capital as well as to residents of trailer parks and contractors on wind farms. They debated evangelicals on street corners, canvassed in North Carolina and traveled to rallies. On their blogs, they wrote about the everyday as well as the profound.

On Election Day, Naje and Salem filmed a spoof at an Austin voting station, parodying their own system by acting like confused Luddites trying to make sense of the American democratic process. After asking whether the voting lines were really bread lines (bread lines were making headlines in Egypt) and noting that there was no judicial oversight at the voting station, they commented on how “safe” the elections felt. Where was the fighting, the arguing, they jokingly wondered. “These poor Americans,” Mahmoud says, laughing, as the scene ends.

The feel-good “change” and “hope” campaigns of U.S. politicians are not directed at the Arab world—though many there desperately want those same things.

But they were serious about elections, and the future of their country. Later that evening, Naje told me how his father, then a member of the Muslim Brotherhood, used to dress in his best suit on the morning of parliamentary elections and head down to the polling station. Naje would check up on him later, at his mother’s request, and find his father waiting patiently to vote. When he was not allowed, he would calmly await the arrival of news organizations. When thugs showed up to intimidate voters, he would find out how much they were being paid and offer them more money to leave once the cameras were gone. The whole dance had left Naje jaded.

Debating them that 2008 evening, I wanted the experience of a U.S. election to pierce such cynicism. George W. Bush’s talk of democracy had not made Egyptian democracy any better, but I thought Obama’s might. I wanted them to believe that an Obama victory was also a victory for the Middle East, for the Arab world, and most all, for them. Bush had invaded Iraq on a lie and helped dictators in the region oppress their populations. Bush supervised water boarding and Abu Ghraib; Bush opened Guantanamo. But Obama had promised to reverse it all.

Naje and Salem, however, were having none of my arguments. They were not Obama fans. They were skeptical.

A little over two years later, in January 2011, our different opinions were put to the test. It was Naje and Salem’s turn to demand “change” for their country. Millions took to the streets of Cairo to demand that then-President Hosni Mubarak step down. Young activists like Naje and Salem marched through Tahrir chanting slogans like, “The people want the fall of the regime,” and “Lift your head up high, you’re Egyptian.”

Meanwhile, the United States fumbled its response. The Obama administration was left calling Mubarak an “ally,” asking for “reform” and merely condemning any violence. For nearly a week, the American government struggled to reconfigure decades-old policy that supported dictatorships in return for stability.

The U.S. eventually supported the uprising, but in the Egyptian election that followed, too many candidates split the liberal vote, which provided an opening for the Muslim Brotherhood. The elected government of Mohamed Morsi was overthrown by the military. The possibility of an Islamist government opened the way for a new authoritarianism—and the rise of a new strongman, Abdel-Fattah al-Sisi. The Sisi government, in turn, crushed the Muslim Brotherhood, jailing most of its activists and making membership once again illegal. It has also imprisoned thousands of activists, journalists, and other people who continued to struggle for democratic change.

Which is why Naje is now locked away. A 2013 protest law has been used to clamp down on all forms of dissent. Last year, the Committee to Protect Journalists named Egypt as the second worst jailer of journalists worldwide, coming in just after China.

Meanwhile, the rise of the Islamic State in the political vacuum of war-torn Syria has made authoritarianism in Egypt more palpable to some. Dictators once again present a “them or us” argument. America has returned to a pre-revolutionary policy of propping up dictators in the name of stability.

Now, as I follow the current year’s election in the United States, I find myself wondering what Naje and Salem would say about the rise of Donald Trump’s authoritarianism. Or what Naje, the pro-union liberal, would think of Bernie Sanders’ revolutionary message. Would the two of them parody Trump? Or their own system again? Would they still have it in them to make fun of it all—after all that they’ve been through?

I’ve tried to reach out to Salem, but haven’t heard much from him. Which leaves me to reflect. Mostly, I think about how I just didn’t get it the last time. Naje and Salem were right. Obama was not good for them. Sanders, Clinton, or any of the other current candidates probably won’t be either. The feel-good “change” and “hope” campaigns of U.S. politicians are not directed at the Arab world—though many there desperately want those same things. Naje and Salem understood that. They know the U.S. and its history—what we’ve done in the Arab world and abroad for decades. They know the U.S. deposed democratically elected governments in Iran. They know the U.S. counts on dictatorships in “moderate” countries like Egypt and Saudi Arabia in exchange for political support and financial gains.

The sentiments that led to the Egyptian revolution of 2011 did not and will not disappear. The desire for more freedom and democratic change are still there.

But U.S. candidates won’t matter to Egyptians until the U.S. examines and re-evaluates policies in the Arab world. As The New York Times editorial about U.S.-Egypt relations put it a few weeks ago, it is time “to reassess whether an alliance that has long been considered a cornerstone of American national security policy is doing more harm than good.” But even this falls short. We must re-evaluate policies towards Saudi Arabia, Iran, and Egypt, and our hand in the Palestinian-Israeli conflict. (Sanders’s unprecedented comments in a recent debate might be a start.)
Decades of supporting dictatorial regimes in the Arab world will never result in peace and stability—not for them, and not for us.

So we must look at new options. When Naje and Salem hear a candidate really speaking about different foreign policy in the Middle East, they might have a different opinion of our politics—though they’ll still rightly be skeptical.

Until that point, Naje and hundreds of others remain in jail in Egypt. And we remain silent.