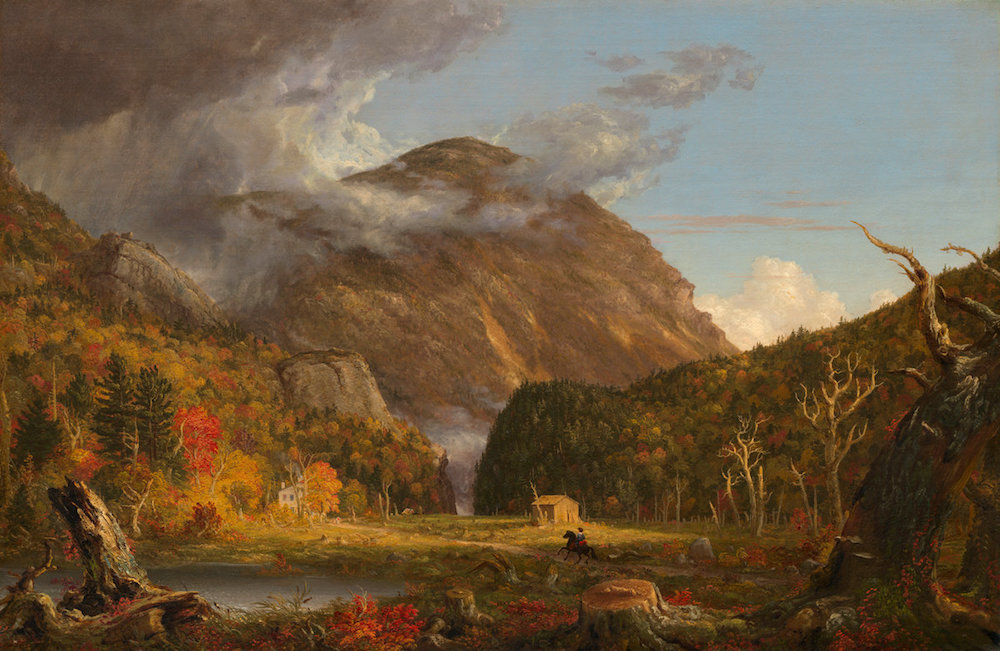 In the spring of 1642, in what was then the Upper Plantation of Massachusetts Bay Colony, later the colony, and still later the state of New Hampshire, Darby Field, a 32-year-old Englishman of Irish descent, was doing something unprecedented in England’s newly-established North American colonies—climbing a mountain.

Field, a resident of the community of Pascataquack (present day Durham, New Hampshire), left no written record of his climb or indication of its purpose. But others, including John Winthrop, governor of Massachusetts Bay Colony, took note of this odd endeavor. Mountain climbing was something few people anywhere did in the 17th century and Field seems to have been regarded by his contemporaries as a bit eccentric, if harmless. Following his death in 1649, it was remarked that his was a life of “merriness marred by insanity.”

Whatever his state of mind, on a cloudy day sometime in the spring of 1642, Field picked his way through the stony debris on the upper slopes of what he called the “White Hill” and is today known as Mount Washington. One or two Native Americans from the local Abenaki tribe, the Pigwacket, reluctantly accompanied him; several others had traveled with him up the Saco River, as far as the mountain’s base, and then refused to proceed, fearing evil consequences.

In this the Pigwacket were not so different than many of the Europeans now arriving in the New World, who had long regarded their own native mountains, such as the Alps, as the dwellings of witches and dragons. As for the Protestant dissenters (Pilgrims and Puritans) who came to New England in the early years of the 17th century, they had been raised in the flat open country of eastern England. Few, if any, had seen a mountain even as high as Scotland’s Ben Nevis, at 4,409 feet the highest in Britain (which would go unclimbed until 1771). Mountains were outside their experience, and when they employed them as literary devices in sermons and histories, they usually linked the image with something unpleasant. In his History of Plymouth Plantation, William Bradford, governor of Plymouth Colony, complained that his fellow pilgrims were unable to “go up to the top of Pisgah, to view from this wilderness and more goodly country to feed their hopes,” for they were surrounded on all sides by “a hideous and desolate wilderness, full of wild beasts and wild men.” A half century later, Nathaniel Saltonstall, historian of the bloody Native American uprising in New England of 1672 known as King Philip’s war, complained that the Wampanoag combatants hid themselves away in “Boggs, rocky Mountains, and Thickets,” from which they launched attacks on white settlers.

In reality, Native Americans in the New England region had as little to do with “rocky Mountains” as they could. There is no archeological evidence from the pre-colonial era that they ever climbed any of the region’s loftier mountains, though they may have hunted upon or crossed some of the lower slopes.

So Darby Field and his two native companions were breaking many taboos as they neared the summit of the White Hill in 1642. At 6,288 feet, it’s the highest peak in the northeastern United States. Europeans had spotted the mountain soon after the discovery of the New World. Italian navigator John Cabot, sailing on behalf of the English, may have glimpsed it in 1497, and Italian navigator Giovanni da Verrazano, sailing on behalf of France, definitely did in 1524. Frenchman Samuel de Champlain saw it in 1605, as did Englishman John Smith in 1614. In Smith’s 1616 Description of New England, he noted that the rivers of the New England coast “are most pure, proceeding from the intrals [entrails] of rockie mountains.” By 1672 the range, which runs 70 miles across present-day New Hampshire into western Maine and is part of the Appalachian chain, acquired its enduring name, the White Mountains. Seventeenth-century travelers described the mountains as covered in snow year round; no longer true, but possible in the “Little Ice Age” that prevailed in the northern hemisphere in the 17th and 18th centuries.

When Field and company reached the top, the clouds lifted. They found themselves in a field of large boulders and broken rock. The view must have stunned them. Hundreds of feet below where they stood, the alpine landscape gave way to dense green timber. The sides of the mountain were cut by deep ravines, flanked by dramatic rocky walls. They peered over the edge to the east and saw a broad glacial cirque with a steep headwall (Tuckerman Ravine). Down the west side they could they could see a rocky slope descending to two alpine lakes (Lakes of the Clouds). Immediately to the north, the mountain fell away, as Winthrop recorded, “into such a precipice, as they could scarce discern to the bottom” (the Great Gulf); the climbers also saw to the north nearby summits “rising above the rest, but far beneath them.” Those peaks, many of which topped the 5,000-foot mark, later became known as part of the White Mountains’ Presidential range.

Field made a return trip and second ascent of Mount Washington about a month later, with five or six others “of his company”—whether his companions on that climb were native or European-born is unclear from Governor Winthrop’s account. That time he brought back some stones from the mountaintop, which, Winthrop recorded, Field “supposed had been diamonds.” Early reports of Field’s climb prompted several others to follow in his footsteps, Winthrop noted, “but they found nothing worth their pains.”

Diamonds do not lie around for the picking atop Mount Washington. All that Darby Field had to show for his efforts were some worthless pieces of quartzite or mica schist. That, and a summit altitude record in North American mountaineering that would last for nearly a century and a half. As for Mount Washington, and the surrounding summits, once the excitement of 1642 passed, no more than a handful of climbers visited them again until the 19th century.

And a curious thing happened in the interval. Mountains went from being dwelling places of evil, or, at best, obstacles to westward migration, to becoming symbols of personal redemption and national mission. Transcendentalist Henry David Thoreau, who climbed Mount Washington twice, along with a number of other New England peaks, read into the mountain landscape a higher truth than that afforded to those who kept to the lowlands. “In passing over these heights of land…,” he wrote in 1842, two hundred years after Darby Field’s ascent of the White Hill, “the follies of the plain are refined and purified…” That same year, explorer John C. Fremont reached the summit of “Snow Peak” (13,475 foot Fremont Peak in the Wind River range of the Wyoming Rockies) and planted a homemade American flag there—or, as he put it, “unfurled the national flag to wave where flag never waved before.” Following the Civil War, these two ways of viewing mountains—the transcendentalist and the nationalist—blended into one, in a patriotic sacralization of mountain landscapes that continues to shape the way Americans view them down to the present, as we are reminded every time we sing the praises of “purple mountain majesties” in “America the Beautiful.”

It’s a shame Darby Field never got to sing the 1893 hymn, nor see the awe-inspiring mountain ranges of the American West. Nor learn that he wasn’t so eccentric after all.