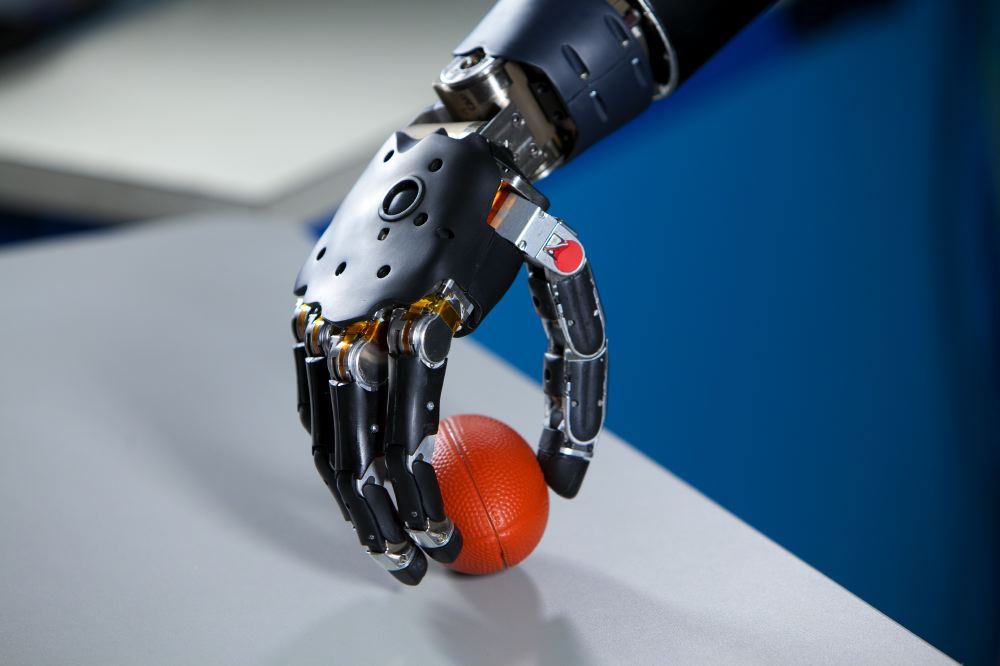 You’ve probably seen the Frozen, Iron Man, and Star Wars prosthetics—intended to boost the confidence of kids with missing limbs. Now you can even meet the first man with the Luke Skywalker arm. With today’s ever-increasing technology, some of these once fictional devices are making their way to real life.

This spring, DARPA’s Haptix program hit the media with one of its newest hand prosthetic prototypes. This device from the Defense Department’s research lab adds a novel feature to prosthetic technology: that of a sense of touch. “Without sensation, no matter how good the hand is, you can’t perform at a human level,” Justin Tyler, a researcher at the Functional Neural Interface Lab at Case Western Reserve University, said in a statement. This mentality aligns with today’s goals of prosthetic technology research—to design devices that are biologically inspired, capable of mimicking the anatomical and functional features of a human limb. The only way to perform at a human level is to replicate the human form.

The recent progress in prosthetic technology—like finger joints that move like individual fingers and biomaterials that move like human muscle—has been nothing short of extraordinary. However, the last comprehensive review of prosthetic use, published in 2007 by the International Society for Prosthetics and Orthotics, demonstrated that the rate of device abandonment (a person discontinuing use of a device after obtaining it) has not decreased in the last 25 years even with these large gains in prosthetic technology. To date, the rate of abandonment is 35 percent and 45 percent for body-powered and electric prosthetic devices, respectively. It turns out that the pursuit of technology that imitates human form and function with increasing accuracy might be hurting a critical component of prosthetic adoption: how easy it is to use.

Not surprisingly, the technology to enable a prosthetic device to move and feel precisely like a biological hand introduces increased complexity to the device. For example, typical high-tech devices are controlled by the activation of residual muscles in the arm or some other external control feature. Thus, adding a feature like independent control of individual fingers may require significant focus or attention from a user. From a practical perspective, this adds a level of inconvenience for everyday use. For example, in the video below the user appears to be able to use the prosthetic arm well, but note that the device is controlled with his feet. Because of this, the device can only be used when standing still.

In addition, properly using the hand requires a person to learn about a variety of device controls. The forethought required to operate this type of device in a complex way can be quite burdensome for a user and may require extensive training. This high cognitive load can be distracting and tiring compared with how effortless it is to use a biological hand, or more rudimentary if using a less nimble prosthetic. This is exaggerated further by the fact that the majority of patients who come into a prosthetist’s office are older adults, who may be more likely to struggle with the increased device complexity.

In theory, designing a prosthetic device with full biological capability is a dream come true, an accomplishment we’d expect to see in an upcoming sci-fi thriller. Better yet, it would be a feat in engineering that would go down in history. But as a researcher in this field, I believe that too often, we overlook the potential for usability. Regardless of the technological advancement, it’s important to consider whether this progress is also a step forward for designing a favorable device for the user. We assume that performing “at the human level” is the ultimate goal. But this may not always be the case from the user point of view, especially if mastering the technology that enables “human level” performance would render you incapable of concentrating on anything else. This dichotomy may explain why the prosthetic abandonment rate has not decreased even as technology has improved.

Technology itself can’t tell us about the wants and needs of a potential user. Perhaps at the end of the day, all a user needs is a reliable device that renders him or her functional, if not to the same degree as she would be with an actual human limb. Simply obtaining a prosthetic device can be difficult. Prosthetic devices, especially those with advanced technology, come with considerable costs, those of which may range from $30,000-$120,000. And because insurance costs are categorized by function, they can be difficult to be approved for coverage. Thus, a user’s goal may be far more conservative than an engineer’s goal, focused not on a specific parameter but rather in simply obtaining any device.

The current state of prosthetic technology finds researchers at a crossroads between technology and usability.

This might be a textbook case of allowing the perfect to be the enemy of the good. Too often, it seems that device design lacks a “human factors” approach, driven as it is by many scientists with relatively little input from patients. The people in need of prosthetics may get involved only when a product reaches testing, rather than at the initial stages of device design.

A human-factors approach to the design of prosthetic technology would introduce user ideas earlier in the design process. If prosthetic technology exists to serve as an assistive device for a person who has lost a limb due to a congenital condition or traumatic accident, then the success of device design will be based on the ability of researchers to understand the needs of the user at the beginning of this process and ultimately to design or adapt novel technology to address those needs. This mentality may, to some extent, explain the rise in 3D-printed hands by groups like Enabling the Future. These at-home projects may lack flash, but they offer a potential user the chance to be heavily involved in the design and testing stages. Moreover, this environment allows testing around prosaic daily activities, such as getting dressed or helping a loved one or child prepare for her or his day, that often get overlooked in lab-based scenarios. Lastly, the cost of 3D printing is significantly less compared with obtaining a market device.

The current state of prosthetic technology finds researchers at a crossroads between technology and usability. One road involves plowing ahead in the incessant quest for greater technological complexity of prosthetics so as to approximate the human body. That road leads to more buzz about the wonders of technology and interesting peer-reviewed academic publications, but may not improve the overall utility of these devices from a user perspective. The other road will lead scientists to integrate themselves and their work with actual patient needs, and to progress in a more user-driven direction.

Once we establish a technology that allows us to mimic the human form effortlessly, perhaps this dialogue between scientists and users will become irrelevant. But until that time, let’s abandon this idea that designing a device that performs at a human level, no matter its complexity, should be our sole focus. It’s time we acknowledge that prosthetics are only as good as their usefulness to real patients in everyday life. It’s time, in other words, for greater collaboration between scientists and prosthetics users to close the gap between technology and practicality.