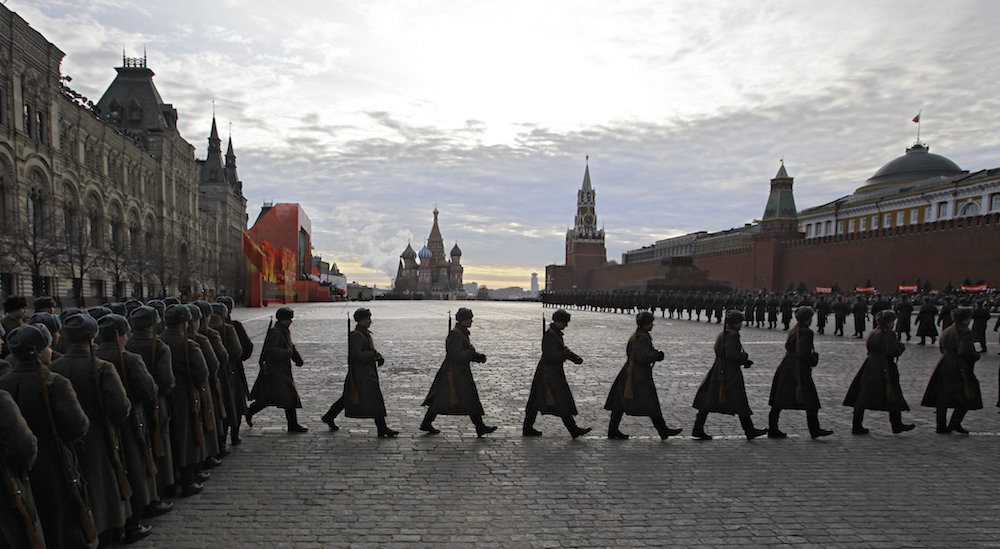 I never stood a chance. Of course Russia would seduce me.

It was the early 1980s and Robert Massie had just published his riveting Peter the Great biography (I devoured it on a family cruise, which surprisingly didn’t impress the teenage girls onboard); Warren Beatty had produced his magisterial (super long) Reds; and the ABC TV network broadcast The Day After, a movie about a Soviet nuclear strike that millions of high schoolers across the land, myself included, were encouraged to come together to watch, and then discuss. Because, you know, that really could happen. And so, the adults wanted to know, how did that make us feel?

Well, it made me feel like this Russia, land of despotic czars, earthshattering revolutions and missiles targeted our way, was a pretty happening place. And that’s even before getting to what was on the nightly news. The Soviets had invaded Afghanistan, and shot down a Korean airliner. President Reagan was calling them an evil empire and threatening to build a space-based anti-missile defense system in response to that movie we’d all seen on ABC. The Soviets were threatening to boycott our Olympics, as we had done theirs. The New York Times, meanwhile, spent a lot of newsprint trying to divine the intention of otherwise inscrutable Soviet leaders by their wardrobes. The nattier their suits, went the dubious logic, the greater the likelihood of a peaceful understanding between the two superpowers.

Back then, everything about Russia seemed massive, extreme and epic; contradictory and opaque. Russians had withstood centuries of unimaginable hardship to find themselves the improbable standard-bearers of a global cause that promised universal redemption, but delivered instead a rather grim version of purgatory on earth. Comrade, gulag, Siberia—single words dripping with vivid associations conveyed the price individual Russians had paid to preside collectively over one of two global power blocs: Team Red. The Russians had defeated Napoleon and Hitler; given humanity the gifts of Pushkin, Gogol and Dostoevsky; launched the first satellite in space; kicked ass at every Olympics (now we know how); and obsessed weirdly over ballet and chess.

So naturally I said “sign me up” when I had an opportunity to visit the Soviet Union for two weeks while still in high school, as part of a cultural exchange. It was a trippy voyage to an alternative reality. With any genuine revolutionary zeal long extinguished by decades of living under the soul-crushing dictatorship of the proletariat, Moscow, Leningrad, and Minsk—their inherent March grayness still festooned with exhortative propaganda banners—felt like a kitschy totalitarian amusement park. Almost. There was nothing faded or fake about the palpable fear of ordinary Russians you’d meet with late at night under the statue of Yuri Gagarin to trade a Sony Walkman or jeans for KGB Border Guard hats or coats.

No other power has since replaced the USSR as a proper antithesis to the United States.

College deepened the seduction. I was completely in awe of the troika of Yale historians who brought the Soviets’ dramatic backstory to life: Firuz Kazemzadeh, who spiced his telling of the Romanovs’ three-century-long soap opera with vivid imagery of the empire’s Caucasian borderlands; Paul Bushkovitch, who handed out shots of vodka on Lenin’s birthday at our Russian Revolution seminar; and the ever-theatrical Wolfgang Leonhard, the former East German communist intellectual raised in Moscow who had turned on the DDR regime he had helped consolidate in its earliest days. As if the history weren’t enough, there was the brilliant literature and the challenging language, with all those declensions and the funky blending of those sh, ch and jr sounds, and the elongated mix of vowel sounds playing like a string quartet.

Best of all, none of this intoxicating immersion in all things Russian could be dismissed as an esoteric indulgence. Russia mattered; understanding Russia mattered. Couldn’t you see the breathless coverage those Reagan-Gorbachev summits were getting on TV? Know your enemy, and all that. It’s the same reason I see many young ambitious people nowadays rushing to study Arabic. It’s patriotic, career savvy, and intellectually satisfying, given the richness of the underlying culture.

Now don’t get me wrong. No other power has since replaced the USSR as a proper antithesis to the United States. China is a potent commercial competitor and a wary rival for influence in Asia, but its reach and ambitions aren’t expansive enough to turn the entire globe into a bipolar zero-sum face-off, as the Soviets once did. And more immediate threats loom elsewhere, across a series of smaller countries and terrorist groups.

The undeniable nostalgia for the Cold War in American culture is a hard thing to fathom, and it is one of the animating mysteries behind this week’s Inquiry at Zócalo. That confrontation came with a heavy price for Americans, and an even heavier price for people in many parts of the world who were treated as pawns in the two superpowers’ global chess match. And to the extent that after so much sacrifice and effort we’d already “won” it (a regrettable attitude that has gotten in the way of a more constructive relationship with Russia), why would Americans want to go back to the Cold War?

Let’s face it, the alternative to a Cold War with the Russians, has proven less appetizing than we might have expected. It’s not easy being the sole “hyperpower” responsible for all things. And the Soviets were formidable in a way that our more amorphous all-out enemies today—a shifting amalgam of unstable regimes and loosely affiliated transnational terrorist groups—can never be. Extremist Islamist groups aren’t competing head-to-head with our best and brightest to explore space, to cure cancer, to win over hearts and minds in Western Europe, East Asia, and Latin America, or to win Olympic gold.

And yet today’s less worthy opponents are more dangerous because they lack a superpower’s rationality and investment in a bipolar status quo. In our age of asymmetrical warfare and proliferating weapons of mass destruction, you don’t need a Russian-sized nuclear arsenal to pose an imminent threat to our way of life. No enemy we face again will likely have at its disposal the destructive force the Soviets could command, but plenty of enemies we face today and will face in the future are far more likely to unleash whatever destructive force they can muster. There was much to abhor about our Soviet nemesis during the Cold War, but deep down, its leaders never wanted us all dead.

[The Cold War] came with a heavy price for Americans, and an even heavier price for people in many parts of the world who were treated as pawns in the two superpowers’ global chess match.

With the Russians, you always felt that if aliens from another galaxy attacked earth, the American president could pick up his red phone and get Moscow to set aside their differences with us and join forces on Team Humanity. When it comes to the likes of ISIS, good luck with that.

The Russian-American rivalry has been playing itself out for one year shy of a century. It was in 1917 that both gigantic nations burst onto the global stage to offer a war-weary world competing visions of an alternative tomorrow. Woodrow Wilson and Vladimir Lenin appeared on the destroyed imperial scene as messianic figures, one peddling the possibility of national self-determination to all peoples through his Fourteen Points, the other carrying the torch for the international proletarian revolution that would render nationalism, and social classes, obsolete.

With all its flaws and heinous behavior, the USSR, much like the United States and contrary to most other modern nation-states, was predicated on a universal ideal that people anywhere could rally around. The Soviets’ project was also— again, despite its flaws—a forward-looking one, unlike those of our current enemies who desperately want to turn back the clock.

The formal demise of the USSR in 1991 ostensibly ended the Cold War, and historians will long debate the extent to which the ensuing few years constituted a missed opportunity on Washington’s part to recast U.S.-Russian relations on far friendlier ground. But whether you believe the fault lies primarily with our missteps or inevitable Russian yearnings to remain an antithesis to the West, the fact is that the Cold War antagonism is back.

That’s both maddening and comforting. Russia is less of a global player than the Soviet Union, more of a “normal country,” and it must now share the other end of the proverbial seesaw from us with other U.S. antagonists. So the stakes may not be quite as high, but Vladimir Putin is doing his darnedest to play the part.

The Russians are back, in time to mess with our presidential election, both as a befuddling topic and a devious protagonist. It’s hard to imagine a more Cold War-ish form of belligerence than cyber warfare, and the hacking of our electoral process and of our leaders’ private communications, with an eye towards their public dissemination. Such attacks are a sophisticated technical challenge, no one gets physically hurt, but the mere possibility of these hacks wreak havoc on our nerves, and incite waves of insecurity and paranoia, as well as calls for retaliation and escalation.

The seductive chess match is back on.