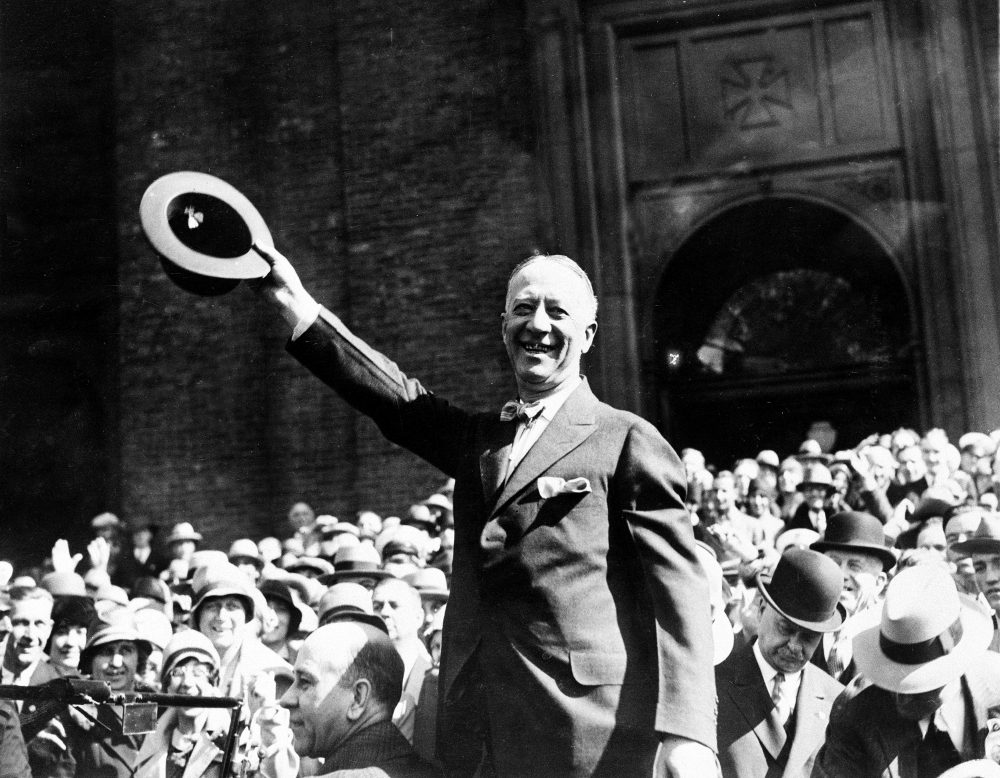 It was not the craziest election of the 20th Century, but it might have been the strangest.

One candidate was a natural politician, affable and gregarious, a true man-of-the-people who favored flashy suits and a trademark derby hat. Reporters loved him and admirers thronged his events.

The other contender could easily be classified a misanthrope. He was a miserable public speaker who hated crowds and disdained the campaign regimen of shaking hands and kissing babies. For months, even after secretly directing his staff to launch his campaign, he publicly disavowed interest in the presidency. He made a total of five major speeches in the course of the campaign, each time promptly retreating afterward to his home in Washington. He brushed off the press corps, speaking only to trusted correspondents.

And yet it was the misanthrope, Herbert Hoover, who won the 1928 presidential election in a landslide. The loser was Al Smith, a popular mayor of New York just as America was swinging from its rural past to its urban future. But in that moment, he didn’t fit the popular ideal of “presidential.”

It was the height of the Roaring ‘20s, and the electorate delivered a startling result that made sense only in a time that seemed to define itself by defying convention. In choosing their political leaders, the voters of the ‘20s appear to have decided that the decade’s fads were for the dance floor; that when it came to politics, sober and circumspect was the order of the day. Thus it was the famously quiet Calvin Coolidge who prevailed in 1924; thus it was Herbert Hoover, a dour and self-effacing Quaker, who was chosen his successor (in an election that bore all the marks of inevitability).

Certainly, it wasn’t policy that decided the election. There was little to distinguish, in those days, between the Republican and Democratic agenda. In fact, when Hoover first emerged as a public figure eight years before, both major parties recruited him as a prospective standard-bearer.

At that point, Hoover’s ambivalence got the best of him and he rebuffed all comers, preferring to accept a Cabinet position. He built his reputation from there, gaining public trust as secretary of commerce under successive Republican presidents.

Eight years later, he ran with the party he served under. But there was no great policy gulf between Republicans and Democrats at the time. Both parties voiced support for limited government, both sought alliance with big business, both supported arms control, and both decided, reluctantly, to abandon Woodrow Wilson’s League of Nations as politically unfeasible.

Even the sole longstanding division between the parties, over trade policy, was muted. In that day Republicans stood for tariff protection to foster domestic industry, while Democrats touted the benefits of free trade. During the campaign, however, Smith softened his opposition to tariffs, and emphasized his support for business, in part to meet the challenge of the Republican alliance with business, and in part because Smith fully subscribed to the idea that free enterprise meant opportunity for all.

The one real divide came over Prohibition. Hoover enjoyed an occasional martini, but true to his repressed character, he embraced the ban on drink as the will of the people. On the other hand, as a Catholic and an urbanite, Smith saluted Prohibition as the law of the land but acknowledged that he personally opposed it.

John Raskob, a financier with offices at both DuPont and General Motors, was a great friend of Smith’s and became his primary financial backer in 1928. He summed up the contest in a memo to a business colleague. “Governor Smith’s ideas of protecting big business are quite in accord with yours and mine,” Raskob wrote in July. “Personally, I can see no big difference between the parties except the wet and dry question.” 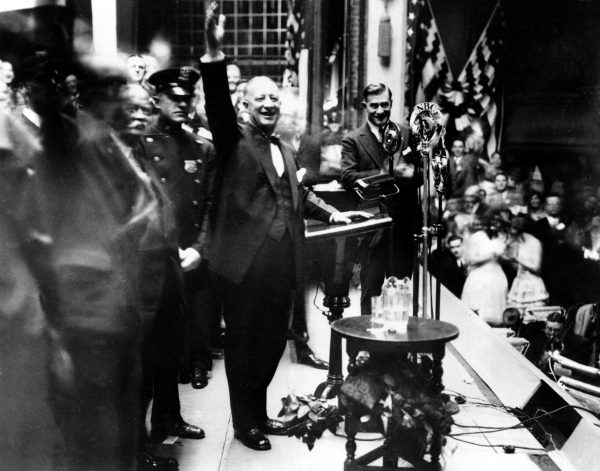 New York Gov. Alfred E. Smith, nearing the close of his campaign for president, addresses supporters in a packed house at the Academy of Music in Brooklyn, N.Y., Nov. 3, 1928.

Neither Hoover nor Smith focused on Prohibition in their personal appearances, but Hoover surrogates kicked up headlines by attacking Smith as a “wet” sympathizer who had fostered in New York “lawlessness and disregard for the Constitution.” At their national convention the Democrats adopted a plank supporting enforcement of the law, but Smith bridled, vowing in a telegram to seek “fundamental changes” in the ban on drink.

In the South, Prohibition mixed with race into a volatile electoral cocktail. The Ku Klux Klan led cultural attacks against Smith’s fellow Catholics as well as against blacks and Jews, while some Hoover speakers denounced Smith as “Romish,” code for foreign, immigrant, and wet—all anathema to white supremacists. But for all these efforts, Hoover and the Republicans couldn’t quite defeat the Democratic Party’s virtual monopoly on racist politics. While Hoover broke into the Democrats’ “Solid South” for the first time since the Civil War, taking Florida, Texas, and North Carolina, the South remained a Democrat stronghold, and delivered Smith six of his seven state victories.

In the end it wasn’t race or booze that decided the contest of 1928. It was the impulse to drive politics out of politics.

The great political event of the 1920s was not war, or peace, or faction, but scandal. Teapot Dome was the name given to an oil-lease kickback scheme that reached to the highest levels of the government in the administration of Warren G. Harding. Evidence suggests that Harding himself didn’t know about it—when he learned of the scam he was so unnerved that the distress it brought on is believed to have killed him. He died in a hotel in San Francisco, two-and-a-half years into his first term, in August 1923.

Allegations of misconduct first surfaced in 1922, but the hearings and trials that ensued dragged out for the rest of the decade. At the same time, America’s cities were dominated by political machines, none more corrupt than New York’s political organization Tammany Hall, where Al Smith had got his start.

Hoover presented himself as the antidote to politics as usual. He was a member of the Harding Cabinet but adroitly avoided the spreading stain of Teapot Dome. Instead he relied on his accomplishments as a mining engineer, as a business executive, and as administrator of major relief projects during World War I to claim the mantle of practical, prosaic competence. At a time when the public was disgusted with politics, he was the definitive anti-politician.

New York Times correspondent Anne O’Hare McCormick spoke for the electorate when she wrote, in 1929, “We had summoned a great engineer to solve our problems for us; now we sat back comfortably and confidently to watch the problems being solved. The modern technical mind was for the first time at the head of a government… Almost with an air of giving genius its chance, we waited for the performance to begin.”

What followed was the crash on Wall Street, and the Depression. Hoover was active, but he failed to connect with a suffering populace. His financial policies were innovative but they worked no miracles, and the idea of a politician allergic to the practice of politics quickly lost its charm.

There are few political maxims that serve in every circumstance, as the career of Herbert Hoover should demonstrate. But if the election of 1928 holds a lesson for today it might be this: Be careful what you wish for.