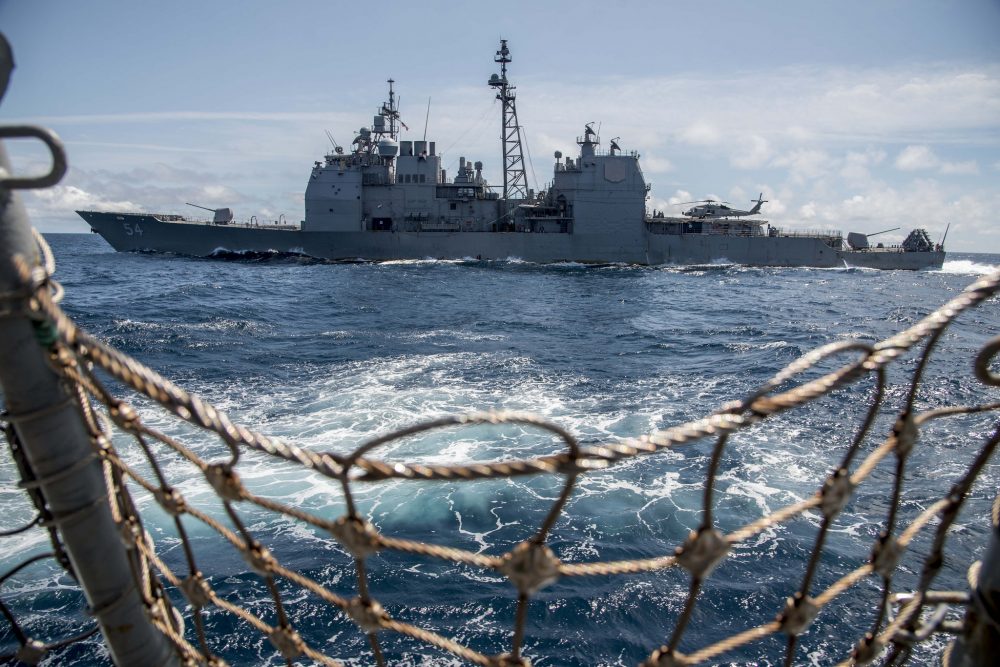 The USS Antietam sails alongside the USS Chung-Hoon in the South China Sea, where several countries, including China, Taiwan, Vietnam, and the Philippines, have made competing claims of territorial ownership. Photo by Marcus L. Stanley. Courtesy of U.S. Pacific Fleet/Flickr.

Zócalo’s editors are diving into our archives and throwing it back to some of our favorite pieces. This week: The late political scientist and sinologist Aileen San Pablo-Baviera reflects on the man-made disputes over the South China Sea—its islands, atolls, and watery borders.

Wherever you go in the Philippines, the sea is never too far away.

I spent summers as a child laying on sunny beaches and playing in the waves. Sometimes we would go to an island where the white sand, framed by coconut trees, was uninterrupted save for the bleached driftwood filled with tiny crustaceans popping in and out of their burrows. Getting there required a 90-minute journey on a tiny boat with outriggers.

With luck, during the trip you could peer into the aquamarine waters and see giant starfish and corals lurking just beneath the surface (or so it seemed, as they actually lay many fathoms deep). Sometimes a school of squid or flying fish would jump across the speeding boat and a few would land in your lap.

With such childhood memories, the sea always beckoned. But I never anticipated that such a big part of my professional life would be spent trying to understand why my country, the Philippines, and many of its neighbors would be quarreling over the reefs, waters, and resources of the South China Sea. China, Vietnam, Malaysia, Brunei, and Taiwan also make claims on the sea. Over the years some claimant states have set up armed garrisons and military bases, constructed concrete installations over hitherto unspoiled reefs, and have unilaterally enforced domestic jurisdictions over fishing grounds, fighting wars of words and filing legal suits over who should have jurisdiction over what and on what basis.

It seems that governments have let their primordial territorial instincts rule them. There is folly in this—they seek control of the waters, as if oceans could be tamed, claimed, and fenced off like the land. In truth, no one knows exactly what they are claiming. Much of the marine life in the depths of the South China Sea remains unexplored. The fish that traverse these seas migrate from one part to another, recognizing no boundaries other than those created by changes in the temperature of the water column. But whereas before the fishermen and gatherers of marine products shared the same privileges as the fish, coming and leaving as they pleased, today they do so in fear of being chased away by flag-carrying patrol boats, at times with grey-hulled warships watching from a distance.

The contest is not only over the waters. Here in the South China Sea, competition rages over even the tiniest land features. I have flown over the South China Sea countless times. And each time, if in the light of day, I crane my neck and look down from the plane in excited anticipation of spotting an atoll here, or an island there.

As I look down at the smallness of the land features, and the distances between them in proportion to the vast expanse of ocean, I cannot help but think of how presumptuous and foolish men are to think that this all belongs to certain countries because once upon a time some persons named or mapped or fished or navigated here before anyone else did. These reefs and shoals, these waters, were here long before today’s modern nation-states emerged, and they will be here long after many have passed from the scene.

Pag-asa Island is one such disputed island, occupied by the Philippines since the early 1970s. It now has a civilian population trying to eke out a livelihood; because while the island is beautiful, such beauty does not guarantee one’s survival. During my first visit nearly 20 years ago, the only settlement was a platoon of soldiers, among them battle-scarred marines, that had been deployed to defend the Philippine claim. At that time, they spoke (without complaining) of what, to them, must have been an enemy worse than a foreign armed force: boredom, isolation, and not knowing what was happening at sea and beyond. Pitch-dark nights were often the loneliest, they said, save for the occasional whirring of low hovering aircraft most likely sent by a rival claimant state to spy on them.

There is bound to be less loneliness and isolation now, because many of these erstwhile uninhabitable places have been enlarged and a few transformed into veritable bases with new harbors, airstrips, and hangars. China has been singled out for the scale and speed and seeming impudence of its island construction activities, but other countries have built as well. The Philippines has refrained from following suit—and opted to promote its maritime rights on the stage of international law and international public opinion.

The contest in the South China Sea has, however, changed. While previous decades saw disputes over valuable rights to natural resources, the area now looks more squarely like a playground for big powers’ competition. The stakes include control over vital sealanes of navigation for commercial as well as military vessels, and over airspace considered critical by certain countries to their defense. The geopolitical situation has only complicated what were already complex territorial and maritime jurisdiction disagreements. Indeed, the disputes are so complicated that no solutions are near at hand.

Recently, I was on a six-day cruise in the East China Sea that started in Shanghai and docked in Okinawa, Nagasaki, and Fukuoka. We were a group of about 20 international relations experts from 15 countries, jointly hosted by Peace Boat, a Japanese NGO engaged in peace advocacy, and the China Foreign Affairs University. The outlook of these two organizations could not have been more different, which made their effort at cooperating to host this conversation about China’s relations with its neighbors all the more impressive.

When not conferencing on the boat, I spent some time on deck watching the sun rise from the sea and set into the sea day after day. Looking out into the seemingly limitless ocean, one could not help but have a sense of being free from territorial boundaries. I thought of how being creatures of the land has taught most of us to think in terms of the state and its narrow interests.

Just exactly at such a moment, another passenger standing beside me—also looking out at sea—nodded his head in one direction and said, “That is where the Senkakus are, not too far from here. That is where Japan and China might yet end up having a war over their contested islands.”