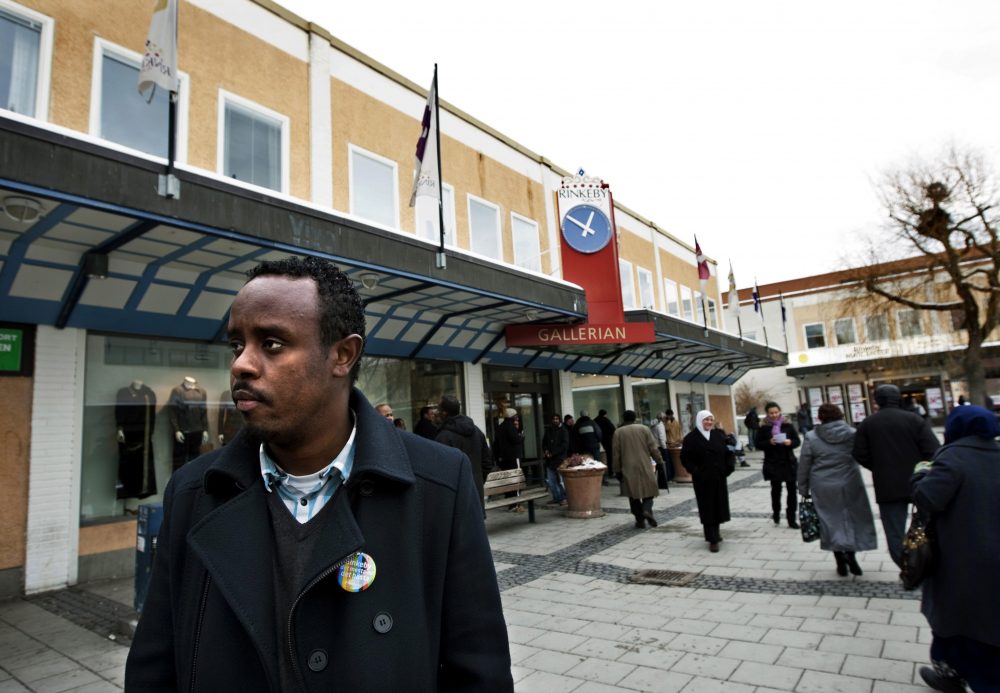 “Which color?” asked the officer, who sat on the other side of the solid table.

“What?” I answered cautiously.

The state representative, whom I met on a gray February day in early 1990 at the Swedish consulate in Zurich, where I studied at that time, became louder: “What color does the toothbrush have?”

I was surprised and a little bit intimidated by this question and responded, whispering, “The color of my toothbrush?”

“No sir,” he screamed back, “the one of your girlfriend!”

I do not remember the ending of this uneven conversation with the immigration officer, with its misunderstanding fueled by our different ways of speaking German. But I did get my permit to move to Sweden that year, to live together with my partner, who later became my wife.

At that time, Sweden, the biggest Nordic country, was not known as a cosmopolitan island of happy diversity and open borders. It was Switzerland—the country of my birth—that proudly fostered a multi-lingual, multi-cultural population. Sweden’s economic and societal success story after the Second World War was based on homogeneity; a foreign policy of keeping its distance from the world; and a welfare state project firmly embedded in a nationalistic idea of Swedishness.

When I arrived there, this “Swedish model” was starting to win attention all the over the world. Sweden’s powerful exports of consumer goods (cars, washing machines, Ikea stores, and Abba songs) had gained it notice, and its welfare state was becoming a reference point for politicians around the world, who either embraced it as a model or railed against it as a socialist danger.

But after passing the toothbrush test and beginning a life in Sweden that continues to this day, a quarter century later, I have discovered that, as with other national narratives, the “Swedish model” only covered part of the story.

My arrival in the early 1990s coincided with national transition and crisis, and the beginning of profound changes in the Swedish model, although I didn’t realize it at the time. The country had been run by one political party, the Social Democrats, for decades, but the economy, and that establishment, teetered and fell. A minority conservative government took over, and state funding rates reached as high as 500 percent. In just two years between 1990 and 1992 unemployment rose from less than 2 percent to more than 10 percent. One casualty of the turmoil would be Sweden’s introverted and isolationist policies.

Sweden’s economic and societal success story after the Second World War was based on homogeneity … and a welfare state project firmly embedded in a nationalistic idea of Swedishness.

To get back to power, the Social Democrats dramatically changed their foreign policy, suddenly embracing European Union membership. The party maintained its strong resistance to immigration as well, but that slowly changed over the next decade, as Swedish public opinion shifted around the Balkan Wars and the country began to embrace more refugees. I was no refugee, but I was fortunate to arrive at a time of greater acceptance of immigrants.

That acceptance would grow because of the Swedish passion for modernity. Swedes love to adapt to new and modern ideas, especially when it comes to technology. (The first mobile phone was invented in Sweden in the 1950s.) But the Swedes also have been early adapters when it comes to social innovations; generous parental leaves were introduced here in the early 1970s. In the regular World Value Surveys, Sweden is today the most extreme outlier, maintaining the planet’s strongest commitments to secularism and to self-expression.

That later passion for self-expression struck me immediately, in part because it is such a contrast to the stereotype of Swedes as moderate, stoic, and boring. Living here, it quickly became clear to me that the Swedes were anything but stolid centrists. And for that I was grateful. For my entire time here, I’ve worked as a press and broadcast correspondent for media organizations in German-speaking Europe. And this zeitgeist-defining Nordic country has offered me an endless supply of interesting and often contrasting stories to share.

Indeed, Sweden, collectively, has turned out to be a drama queen, full of political turnabouts, conflicting legislative turns, and unexpected dark shadows behind the well-kept surface of a peaceful, balanced, and super-modern society with equal opportunities for everyone.

Swedes’ darkness, unpredictability, and multiple contradictions explain their country’s growing cultural soft power globally. They’ve provided raw material for some of the world’s bestselling crime authors, including Henning Mankell (Wallander), Camilla Läckberg (Hidden Child) and Stieg Larsson, whose The Girl Who Kicked the Hornet’s Nest was the bestselling fiction work in the United States in 2010.

Those and other authors have built their plots on hidden aspects of the shining Swedish welfare state. The dramatic tension flows from a well-concealed fact: Even in a country that guarantees its citizens a good life from cradle to grave, chance and the vagaries of human nature can pull people into the nastiest predicaments.

The biggest story I’ve covered over the past 25 years is how the “Swedish model,” which is used as ubiquitously here as the “American dream,” has been stressed and reshaped. Fundamentally, the model has lost its administrative muscles. Sweden no longer goes its own way entirely. It is a political and administrative entity deeply embedded in the multi-level structure of the European Union. The once very paternalistic nation-state has been democratized, and decentralized, work I’ve been involved with as both journalist and activist. Sweden has introduced direct democracy for its citizens, and devolved powers by letting the local levels of government take over the school system.

In the middle of the last decade, the 2000s, Sweden made its acceptance of foreigners more explicit, and profound. It happened, in a predictably unpredictable Swedish way, through an abrupt political transition. After the Social Democrats jettisoned their restrictive immigration policy, and very soon thereafter lost the election to a center-right government majority, the new majority—in a way reminiscent of the center-right government of German Chancellor Angela Merkel—surprised backers and opponents by pursuing openness to the world itself. And so in Sweden it was the conservative prime minister, Fredrik Reinfeldt, who finally opened up the remote Nordic country to people from across the globe.

His goals were twofold. First, he sought to make the country more dynamically 21st-century, a policy broadly supported by his nation of modernity lovers. And second, as Sweden watched the growing number of wars along Europe’s southeastern borders produce the biggest migration wave since World War II, Reinfeldt urged his compatriots “to open our hearts.” And Swedes did just that, in their typically dramatic, even extreme way. In just one year more than 160,000 individuals—mainly from Syria—requested asylum in Sweden, 16 times the number of asylum seekers to the United States.

Sweden, collectively, has turned out to be a drama queen, full of political turnabouts, conflicting legislative turns, and unexpected dark shadows behind the well-kept surface of a peaceful, balanced, and super-modern society with equal opportunities for everyone.

This influx kept giving me flashbacks to my own arrival. The dynamic was similar. Newcomers here are met with curiosity and interest about why they’d come to this cool and remote northern outskirt of Europe. Those who learn Swedish, as I did, receive considerable appreciation. But foreigners’ opinions about Sweden, and what might be done to make it better, don’t receive much consideration. For at least 10 years, I was not supposed to have any opinions at all.

The changes in the population have made Sweden’s political parties and elected bodies increasingly unrepresentative, with a strong bias in favor of the older, middle-class layers of society. These newcomers deserve more of a voice, because they have been crucial contributors to revitalization, especially in smaller towns. One nearby small city in the north, a village of just 300 people, increased its population by 700 in just a couple of years, via the arrival of migrants. Empty houses got new inhabitants, shut-down soccer clubs got many new players, and mothballed schools were reopened.

Nothing stays the same in Sweden for long, and so the country’s openness to newcomers produced a fierce backlash, ahead of that experienced in much of the rest of the Western world and evidenced by the surprises of Brexit and Trump. As a consequence, Reinfeldt eventually lost power in the autumn of 2014 to both his left and his right. On the left, the Social Democrats won back the government. On the far right, the “Sverigedemokraterna” (Sweden Democrats), a post-fascist political party, gained representation by connecting successfully with the minority of Swedes who opposed the changes and openness of the past 25 years.

This has created a double and contradictory turnabout in Swedish politics in the last two years. On one side you have a Social Democratic government (where also a few Green ministers got a seat but little say) that has returned to the restrictive immigration policy of the early 1990s, with strict border controls. Recently, when I returned home from a trip to Germany by train, crossing the border from Denmark, I had to show my passport three times.

On the other side you have the angry Sweden Democrats, who attempt to justify their racist and discriminatory stance toward all non-Western immigrants by blaming them for organized crime in the suburbs of the main cities like Stockholm, Gothenburg, and Malmö. Those places have obvious problems with riots and shootings, but they are a consequence of social neglect by national and local governments.

This split—between the globalist center, a newly isolationist left, and a far-right—makes it hard to know what the Swedish model is anymore. So when President Trump referred to Sweden as a model to avoid, at a campaign-style rally in Florida, everybody here debated which model he might be talking about. The answer seemed to come when the White House started quoting dubious sources and experts close to the Sweden Democrats, which also have started to call Stockholm the world capital of rape.

That claim doesn’t square with the facts. And while Sweden faces new stresses that put it at the frontlines of major arguments about integration and migration and welfare around the world, Trump’s claim of a Swedish downfall is, at the very least, premature.

Indeed, Sweden has been doing quite well, with a strong economic upturn. The OECD (an intergovernmental organization composed of mostly western democracies) offered a very positive assessment of Sweden in its 2017 report. And Swedish democracy remains among the world’s strongest. The Economist Intelligence Unit put Sweden into the top three of modern democracies this year, while the United States was downgraded from a “full” to a “flawed” democracy.

To learn from Sweden does not mean to avoid immigration from certain countries; Sweden has prospered as it accepts immigrants from Muslim-majority nations. But as a Swede, I would suggest that the world learn the virtues of moderation in the midst of great turmoil. Because, contrary to my adopted country’s reputation, Sweden’s difficulties and conflicts stem from its extreme shifts. The Swedish model today means holding on for dear life as your roller coaster of a country twists and turns.