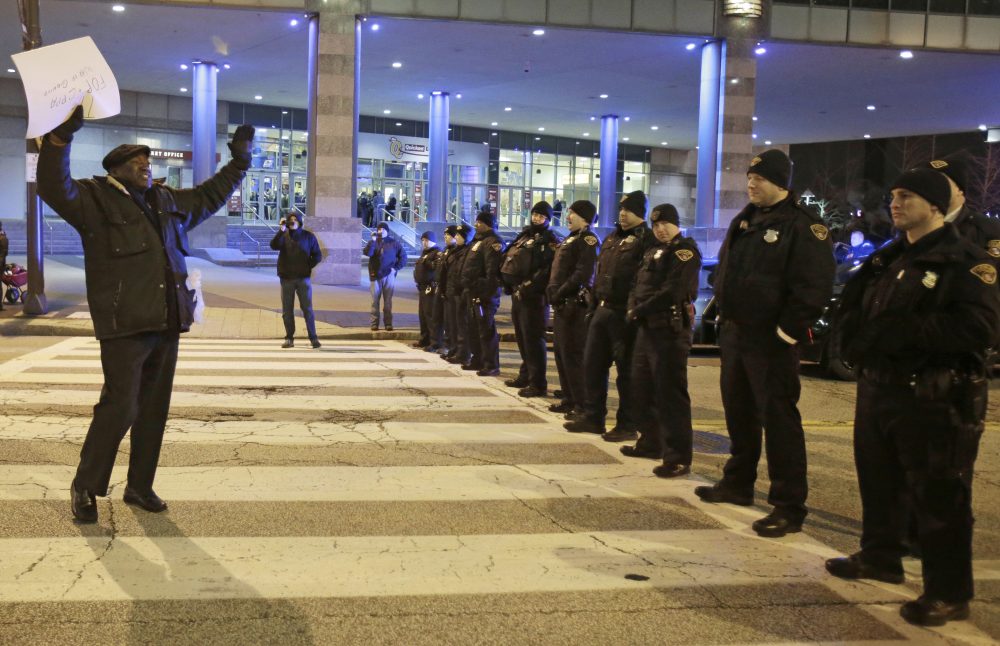 A man yells at authorities during a protest of a grand jury’s decision not to indict two white Cleveland police officers in the fatal shooting of Tamir Rice, a black 12-year-old boy who was playing with a pellet gun. Photo by Tony Dejak/Associated Press.

Albert Camus’s novel The Stranger contains one of the most famous acts of violence in all literature. A man kills someone he doesn’t know, without immediate provocation, in broad daylight. Though the incident is usually read for its philosophical or literary value, it’s also rich in sociological evidence. As a sociologist, the mystery that most interests me is why, after shooting his antagonist once, does Camus’s protagonist deliberately pump four more shots into the body? Camus never explains it. Sociology can, though, revealing some surprisingly applicable lessons in The Stranger when it comes to preventing contemporary police violence.

Camus based his descriptions of Meursault on real experience. He had spent several years as a newspaper reporter, covering the crime news and court trials in an Algerian city and he used real incidents he had covered as the basis for his book. One in particular: A tough guy Camus knew told him about a friend who took him along when he tracked down a man who had knifed him over a dispute. The friend brought a revolver. But in reality, no shot was fired—the confrontation wound down. Most such incidents do.

What makes the difference in those cases where violence, especially deadly violence, breaks out? This is the province of micro-sociology, which studies how people affect each other and set off new patterns that emerge in the interaction. From studies of violent situations, we have learned that face-to-face conflict raises bodily tension. At high levels of tension, opponents become clumsy and inaccurate. They experience sudden increases in levels of adrenaline and cortisol, which is the stress hormone triggered by the primitive fight-or-flight center of the lower brain, an undifferentiated arousal for rapid action that can go either way. 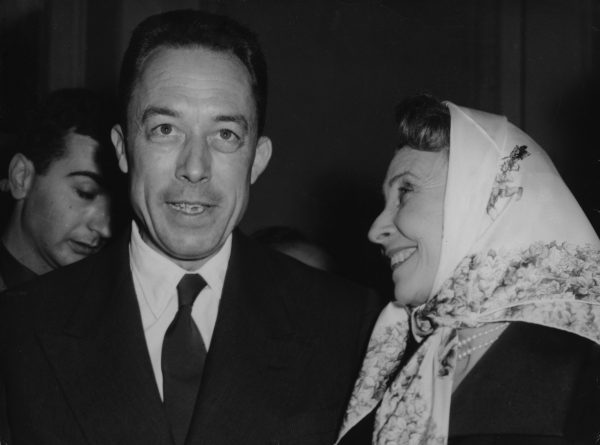 French writer Albert Caumus, after he was announced as the winner of the Nobel Prize for literature, with the French actor Madeleine Renaud, in Paris on Oct. 17, 1957. Photo by Godot/Associate Press.

Without being a social scientist, Camus shows us how this happens. He is an excellent observer of the small details of how people interact in particular situations, especially what consciousness feels or looks like at each moment in one’s body. After agreeing to get involved in the conflict, Meursault stands alone in the hallway, unthinking but hearing “nothing but the blood throbbing in my ears, and for a while I stood still, listening to it.” Another character tells a police officer that, “when I see you standing there looking at me, I can’t help trembling. That’s only natural.” The blood pounding in his ears, and the trembling, are the result of increased adrenaline.

The effect is easily measured. Ordinary resting heart rate is about 60 BPM (beats per minute) in adults and about 100 BPM in moderate exercise. During athletic performance, the heart rate goes up to about 115-145 as big muscle groups are energized. The heart rate also goes up when adrenaline is activated. The effect of emotional tension and fear are stronger than vigorous exercise alone. And at higher BPM levels, fine muscle coordination is progressively lost. Try writing with a pen when your exercise machine says your heart rate is 145 or more. At levels around 150-175 BPM, perceptual distortions start to happen. Time becomes distorted—it seems sped up, or slowed down to a dreamlike, walking-under-water pace. Vision becomes blurred, surroundings are lost, tunnel vision narrows in. Hearing tends to shut down, a cocoon-like experience in which one can’t hear the sounds of one’s own gun or the voices of people around you.

These effects are particularly important in understanding police shootings—a tragic, and unreasonably common, example of unnecessary violence. Virtually all controversial police shootings show signs of these perceptual distortions. In the Tulsa, Oklahoma shooting of Terence Crutcher in September 2016, the officer said she temporarily lost her hearing just before she fired—even though there were sounds of sirens and a police helicopter overhead. In the cocoon of high tension, voices disappear. The more persons who are present—cops, suspects, friends and family, bystanders—the more likely sounds blur into a babble of raised voices. Clear communications break down. And having more police on the scene increases the chances of uncontrolled shooting. Tension is contagious. Cops who are tense tend to make officers around them tense.

One clear sign that a shooting is caused by out-of-control adrenaline is overkill: when an officer fires many more shots than necessary to disable the apparently threatening suspect. Which brings us back to Camus and the mystery of why Meursault fires those four extra shots. Before the shooting, Meursault shows all the acute symptoms of perceptual distortion. “For two hours,” Camus tells us, “the sun seemed to have made no progress.” Meursault’s heart beat is pulsing in his forehead, although he attributes it to the sun; he feels “the whole beach pulsing with heat” and “cymbals of the sun clashing on my skull.” Camus reports on the phenomenology of losing control in a violent confrontation, what I have described as a “forward panic.” Hence those four superfluous shots. Camus took a little-noticed reality of violence, and built a shocking climax out of it.

Camus’s book uses this climax to suggest the absurdity of the universe, the lack of goodness or divinity. He implies that the act is random and could not be avoided or predicted. As a sociologist I see it differently: It’s an example of a phenomenon I’ve studied in real life. With understanding of what causes such unnecessarily violent actions, we can use that knowledge to prevent them.

One clear sign that a shooting is caused by out-of-control adrenaline is overkill: when an officer fires many more shots than necessary to disable the apparently threatening suspect. Which brings us back to Camus and the mystery of why Meursault fires those four extra shots.

This is especially important because of the racism that runs through Camus’s story and much contemporary police violence. These findings can leave us in despair—felled not by existentialism or nihilism, but by the magnitude of biases that run through our society and the seeming impossibility of fixing them all. As a society we need to address racism and political gridlock. But the physiology of violence reveals that we can take other direct steps to decrease police shootings.

We should focus our efforts on heart rate. U.S. Army psychologist Dave Grossman has developed a four-part exercise to reduce heart rate via breathing in slowly, holding one’s breath, then breathing out slowly and holding—and repeating as necessary. Cops should practice this or a similar protocol. They should also wear a monitor, which would tell them when it’s necessary. This practice does not require deep introspection on the part of an officer, or evaluation of one’s motives—it’s a purely physiological assessment. But it would allow cops and others in tense situations to check their biological responses before perceptions become distorted and unnecessary violence happens. Thus a key tool might be a heart rate monitor in addition to a body camera. And rather than relying on the threat of criminal prosecution to deter police shootings, we offer proactive training to bring down heart rates and adrenaline levels.

Certainly, some confrontations develop so quickly that the people involved might not have the chance to breathe deeply. But such situations do not arise very often. Many instances of police shootings—and especially those which turn out to be based on misperceptions—take time to develop. Sometimes officers speed up the situation unnecessarily; in Cleveland in November 2014, the officer who shot a black adolescent carrying a toy gun on a playground raced to the scene and fired within two seconds after jumping from his car.

Better trained officers would be aware of their own body signs and the danger zone of perceptual distortion, and would not attempt to fire until they had a clear view of the situation. Research by sociologists Geoffrey Alpert and Roger Dunham on escalated police encounters found that cops who handle situations better have a better sense of timing. More experienced cops are less likely to scuffle with resisting suspects, and spend more time attempting to control the situation by talking them down and presenting a strong demeanor; when they do use their weapons, they are more decisive.

What about Meursault; would such awareness have saved him? Perhaps. Which would, of course, have ruined Camus’s drama, as well as its symbolic resonance. It might have robbed us of great literature. But great literature is great, in part, because it builds on acute observations of real life. Those observations have a lot to teach us.