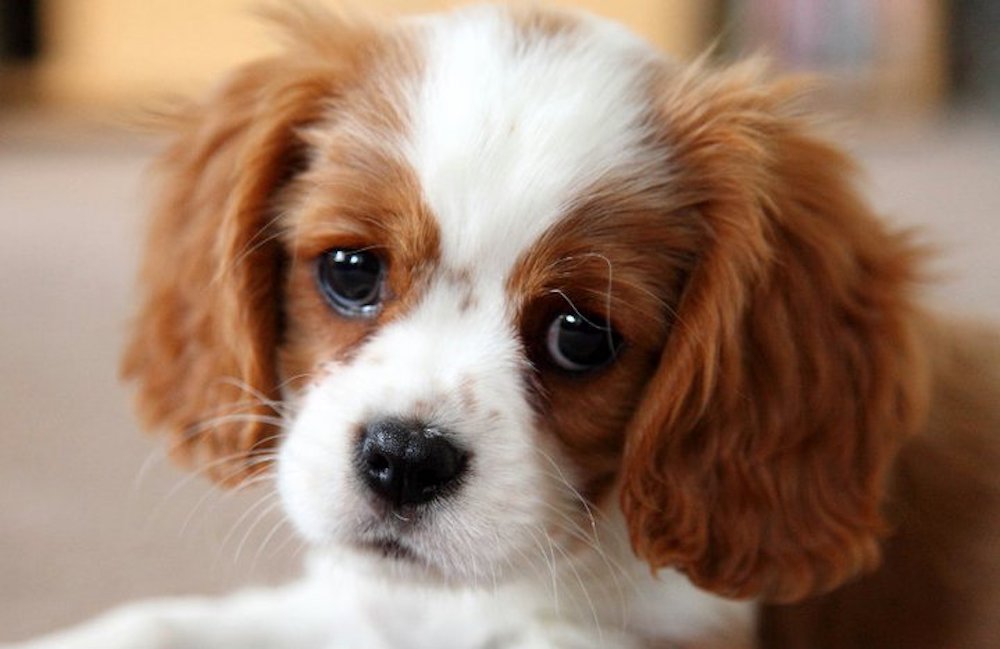 This puppy wants your empathy. Photo courtesy of C. Davis/Flickr.

Every time I go on Facebook I end up staring into the eyes of a puppy. Sometimes it has been mistreated, has a bad case of mange, or worse. Sometimes it’s looking for a home. I feel a tug on my heartstrings: What if I were that homeless puppy? It also makes me feel very important: Only I can save this puppy!

But in real life I have no place for an out-of-state puppy, and I’d rather save my gofundme donation for the friend of a friend who needs help recovering from a bike accident. And so I harden my heart and click on—to watch a cat consoling a crying baby, or Koko the Gorilla showing her distress about the death of Robin Williams.

So goes life in social media, which has become a marketplace for evoking, feeling, displaying, and profiting off the gooey human emotion of empathy. In this new zone, it’s not enough merely to support a cause; we literally become it—by remaking our own profile pictures with a rainbow to show support of gay rights or a purple filter to show solidarity with the sufferers of Lupus. Here there’s an implicit belief that more empathy will make the world a better place.

The only hitch in this scenario are the trolls, who make a great show of having no empathy. They attack those down on their luck with vicious glee. They make statements about which categories of people don’t deserve to live. They post photos that make me feel sad and powerless. Freeing themselves from the sticky bonds of empathy is a release, an entry into an upside-down world with political implications, appealing to hyper-individualist Ayn Rand acolytes and those who are just plain mean. Make fun of reporters with disabilities or women who resist your advances, and you’ll gain followers, even become president. Not-empathy suddenly appears to be a thing as real and ubiquitous as the original.

My Facebook feed—and to some extent my soft squishy heart—are a battleground between pro and anti-empathy forces. What is going on? Has empathy always seemed so crucial? Does it really make the world a better place? Does it do anything at all beyond making some of us feel good? What is it anyway?

Empathy’s history demonstrates its great and particular power. In the early 1700s, as old social structures like religion and aristocracy were faltering, Adam Smith, the great booster of the new system of capitalism, hoped that empathy for one another would be a virtue to temper the individualistic economy and culture that was taking shape. As historian Lynn Hunt explains, a craze for epistolary novels gripped educated Europeans and began a transformation of their interior sensibilities. By sympathizing so thoroughly with desperate heroines in the books they read, people began to sympathize with each other, too, and to recognize each other’s humanness. “What would provide the source of community in this new order that highlighted the rights of the individual?” Hunt asks. The answer turned out to be empathy. 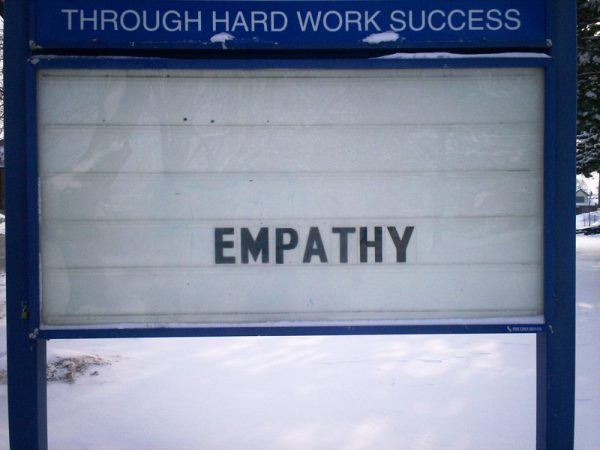 Why are we all working so hard at empathy? Photo courtesy of Pleuntje/Flickr.

Recognition of others’ interior lives led to the idea of inalienable human rights. First granted mainly to white Christian males, rights were then extended to other races, women, and religions, and have more recently given gay people the right to marry and trans people the right to define themselves.

Empathy, history suggests, begets more empathy, and more rights. Where will it stop? Perhaps empathy is a bottomless natural resource. The human future, to the empathist, is one of ever more recognition, and ever more rights—for animals, trees, the whole planet.

But an emotion that powerful could not be left alone in the 20th century. Historian Susan Lanzoni tells the story of the English word’s invention—borrowed from German—in 1907, and its quick repurposing in the treatment of World War Two veterans, troubled marriages, and as a remedy for a history of racist policies by the 1970s. In true mid-century style, empathy was marketed heavily and itself became a staple trick of advertisers. Later, demonstrating empathy became an expectation, a skill of leadership, and a tool of the good salesman, culminating with Bill Clinton professing to “feel our pain.”

It wasn’t until the 1990s, with the discovery of mirror neurons, that empathy became something meatier than an emotion. Since then, the study of empathy has partly been driven by researchers trying to understand autism (where people have strong sympathies for others, but have a hard time cognitively understanding how others are feeling) as well as sociopathy (where people have strong cognitive sense of how others feel but do not feel empathy.) Using ever more sophisticated tools to figure out where empathy happens in the brain, and how, researchers stripped off the sentimental aspects of empathy and made it scientific. In doing more rigorous testing, some of our fondest beliefs have come in for scrutiny. The idea that reading novels can increase our empathy, for example, has not been born out in controlled tests by researcher Maria Eugenia Panero and others.

A careful look at the science of empathy reveals how little we know it. When researcher Sarah Konrath surveyed 100,000 people worldwide, she found that people from Ecuador and Saudi Arabia reported the highest levels of the feeling—but was their empathy the same felt by respondents in the United States, which came in at number seven? And why did some countries, like Finland, have such low scores? Were they really lacking in empathy, or just loath to talk about it? This apparently universally human feeling may not be as universal as we think.

The ubiquity of empathy has its downsides, too. As it has become better understood and somewhat commodified, empathy has become a tactic that large corporations use to get inside their customers’ heads in an effort to sell shoes, software, and ideas, says Carolyn Pedwell. Empathy, she argues, can reinforce power relationships as much as it improves them. And future technologies like robots and AI may go even further in exploiting the human capacity for sympathy for the gain of the powerful, argue Colin Allen and Fritz Breithaupt.

Make fun of reporters with disabilities or women who resist your advances, and you’ll gain followers, even become president. Not-empathy suddenly appears to be a thing as real and ubiquitous as the original.

The weird empathy world of Facebook appears to be only the beginning of a larger process. Advertising, British researcher Andrew McStay concluded in a recent paper, will increasingly make use of both empathy and the web of machines and processors embedded in our lives. He writes that this raises serious “questions about the foundations of the ethics of advertising, i.e. whether it is about free choice of voluntary parties or not. Given the mining of intimate data, this is an important debate about civic health.” McStay, who consulted a wide range of experts, recommends figuring out how to regulate the use of emotional artificial intelligence both for privacy concerns and ethical ones.

I initially assumed that the existence of online trolls—those anti-empathizers—meant that not everyone was susceptible to the charms of emotionally savvy machines. But recently I came across a study that put the trolls in a new light. Psychological researchers Natalie Sest and Evita March surveyed online trolls, who are more likely to be male, and found that they understand empathy all too well. “Trolls employ an empathic strategy of predicting and recognizing the emotional suffering of their victims, while abstaining from the experience of these negative emotions. Thus, trolls appear to be master manipulators of both cyber-settings and their victims’ emotions.”

In other words the trolls, the dog videos, and the gofundmes are all the same thing: a kind of manipulative empathy nightmare, an empathology. The internet has enabled the weaponization of empathy, for both good and ill.

And so the internet turns out to be a medium not unlike those novels of the 1700s, activating our empathy in profoundly new ways, with unpredictable social effects. And while Adam Smith once hoped it would give a highly individualistic society a sense of community, it now seems likely that, in the future, empathy could also tear us apart—in a painfully individualized fashion.

So I think it’s only reasonable to take empathy more seriously, not only as a soft persuasive power, but as one with serious consequences. Regulate its use in devices and games and advertising. Stop designing social media to explicitly exploit empathy and its pathologies. Stop staring into puppies’ eyes.

And more deeply, reconsider the assumption that empathy will save the world. Even with the best intentions, empathy has always been an untrustworthy moral compass. By prioritizing emotional interaction as more genuine than intellectual engagement, empathy seems to offer a shortcut to moral answers and significant understanding. But it can also be a shortcut to the opposite.