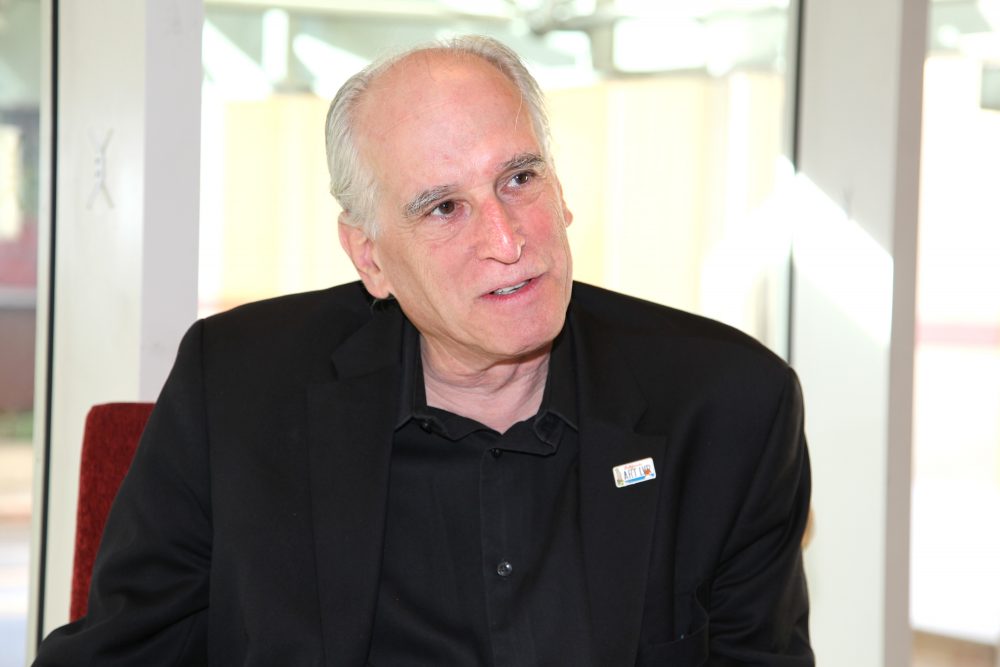 Michael Alexander was the artistic director for the free public concert series presented by Grand Performances in downtown Los Angeles at California Plaza from 1990 to 2017. He served multiple terms as chair of the California Arts Council. A native Angeleno, he started his professional performing career when he was a teenager, working as a clown in the Los Angeles City Circus and as a dancer in the Aman Folk Ensemble. Before acting as the emcee at a daylong Zócalo conference in downtown Los Angeles entitled “What Can the World Teach California About Arts Engagement?” he answered some questions in the green room about his taste in art and music, his largest pair of shoes, and his favorite spot to take out-of-towners in L.A.

Art. My wife refers to it as the house of curiosities. We’ve made bookshelves to hold the things we’ve collected. We have three paintings by Bonita Helmer. One of the pieces is of the balls at the Hollywood Bowl. There were these gigantic balls for acoustic purposes. They got rid of the balls and cut them in 80 pieces and gave them to artists. And we have one of those. Another is a kinetic piece made of wood that’s called “Duet,” which is us.

Maybe it’s not my favorite, but it’s the key in what I do in the arts world: “Price is the barrier.”

What are you normally doing on a Sunday at 8 a.m.?

I’ve either gotten up early to listen to the Sunday Puzzle on NPR, or I’m going to listen to it in two hours. And I’m either doing the crossword in the paper or a Sudoku.

If you could visit any time in history, what would it be?

Times in the past all had high points and low points: illnesses, challenges of fighting civil wrongs. Every time has challenges. I’m not optimistic about the future. I’m not sure I’d want to be a generation or two younger.

What was your most embarrassing job?

I know my most frustrating job was stacking books in the library. It never finished! I’d go home and there were still books to stack. I’m used to jobs that have an end, that are done!

What’s the largest pair of clown shoes you’ve ever worn?

They were about 12 inches across. And 15 or 18 inches long. Your typical, standard, off-the-shelf clown shoes.

What’s your favorite piece of music?

“Song to the Moon” from Dvořák’s opera Rusalka. I need music that hits me emotionally. When I retire, I hope to talk with music psychologists to understand why certain shifts between major and minor keys make me cry.

Did you have a pet when you were a child?

Pretzels. The most embarrassing name for a cat.

What was your first car?

What’s a special spot that you take people to in L.A.?

I start at the tide pool at Cabrillo Beach. Then go to Watts Towers. And then the Wayfarers Chapel, which was designed by Frank Lloyd Wright’s son. You can’t tell when you’re inside and when you’re outside. It’s a little circuit.