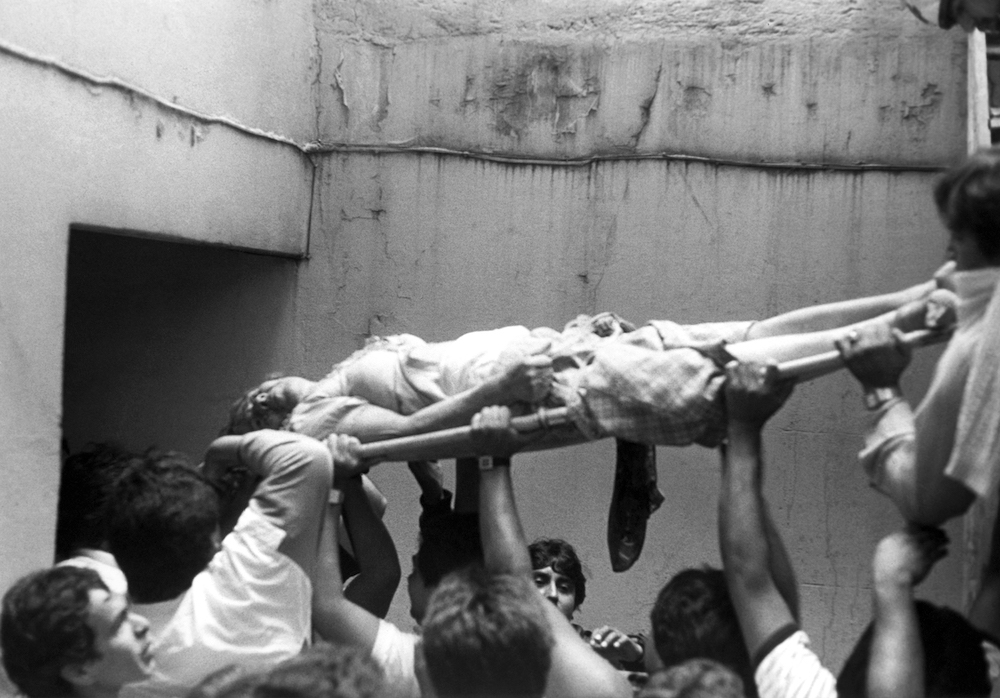 Rescue workers in Mexico City remove an injured woman from the Hotel Principiado in the city’s downtown after the earthquake of Sept. 19, 1985. Photo by Chip Young/Associated Press.

Can the shaking of earthquakes upend political power?

This question often has been answered by referencing Mexico. Political scientists often link Mexico City’s devastating 8.0 magnitude earthquake on September 19, 1985, to the end of the PRI’s seven-decades-long rule of the country 15 years later. Their argument is not that the party was responsible for the loss of some 10,000 lives, but rather that the disaster exposed the incompetence and corruption of a regime that until then seemed to control everything. While the government of President Miguel de la Madrid looked hopeless, if not helpless, ordinary citizens took the lead in rescuing survivors and helping the injured. It was this unexpected bottom-up movement of people that presaged the eventual demise of the then-ruling PRI (Partido Revolucionario Institucional).

Today, the question of earthquakes and politics is again alive, with two new terremotos, including a 7.1-magnitude quake on the 32nd anniversary of the 1985 disaster, devastating Mexico as the PRI again clings to power. The response of ordinary citizens has been reminiscent of the 1985 quake: Tens of hundreds of young people in hard hats spontaneously joined the rescue operation, digging into rubble with bare hands and forming long lines to carry away pieces of concrete and mortar from collapsed buildings.

Despite the parallels, however, predictions of a political earthquake are overblown. Mexico’s quakes may shake the earth, but their political power has long been overestimated. The story of Mexico City quakes, past and present, reminds us that such events make slow impacts, and only damage political orders that were already weak and cracked. And for all the civic action that a tragedy may produce, the impact is temporary.

As a longtime resident and observer of Mexico, I have waited in vain for decades for an autonomous civil society to emerge there. The 1985 earthquake certainly didn’t produce it—nor was the quake the main catalyst for the end of the PRI’s rule.

The unraveling of Mexico’s one-party system really began with the economic crisis of 1982, which shook the country far more than any movement of the earth. The collapse of the peso was followed by high inflation, a deep recession, and a widespread sense of despair. There had been a lesser crisis and currency devaluation in 1976, but it was soon hidden by important off-shore oil discoveries and massive foreign borrowing. After 1982, there were no such band-aids. It was this moment that broke the unwritten contract between the PRI and Mexico’s middle classes.

This contract was simple. A broad political class, which controlled the peasantry, labor unions, and civil servants through the PRI, had brought the country three decades of steady economic growth nicknamed the Mexican “miracle.” In exchange, the growing urban middle classes spent more time vacationing in Acapulco than engaging in politics. Occasionally dissident groups appeared, even armed guerrillas in the mid-1970s, but they were either crushed or co-opted by the system.

The lack of economic growth was far more unsettling. Without it, the ruling political elite was unmasked as self-serving and corrupt and the middle classes began demanding a voice in the country’s affairs.

The demands grew in 1988 when the PRI resorted to fraud to insure the victory of its presidential candidate, Carlos Salinas de Gortari, over his left-leaning opponent, Cuauhtémoc Cárdenas. Ignoring pressure for greater political freedom, Salinas instead chose economic reform, which included privatization of major state-owned companies and utilities and, later, negotiation of the North American Free Trade Agreement (NAFTA) with the United States and Canada.

Darker days followed. When an armed group known as the Zapatistas took up arms in the southern state of Chiapas on January 1, 1994, the rebellion won popular sympathy simply for daring to defy the regime. Three months later, Salinas’s hand-picked successor, Luis Donaldo Colosio, was murdered. Weeks after his PRI replacement, Ernesto Zedillo, took office, a new economic crisis erupted and, with it, fresh middle-class anger at the regime.

As a longtime resident and observer of Mexico, I have waited in vain for decades for an autonomous civil society to emerge there. The 1985 earthquake certainly didn’t produce it—nor was the quake the main catalyst for the end of the PRI’s rule.

With his back to the wall, Zedillo sought to release political pressure by permitting genuinely free elections, with the result that in mid-term elections in 1997 the PRI for the first time ever lost control of the Chamber of Deputies. Then in 2000, to the fury of PRI party dinosaurs, Zedillo refused to step in to block the victory of the conservative National Action Party’s presidential candidate, Vicente Fox Quesada. The impossible had happened: the PRI had been ousted peacefully. The earthquake was merely one small part of a generation-long transformation.

Fox occupied the National Palace in Mexico City’s Zócalo, but he did not inherit the near-absolute power enjoyed by PRI presidents since the 1930s. His party did not control Congress and, as the traditional vertical structure of government fell apart, state governors exercised greater independence and labor unions slipped from central control. The coherence of PRI rule, however perverted it may have seemed to many Mexicans, vanished. As new centers of power emerged, powerful drug cartels which controlled the traffic of cocaine from Colombia to the United States posed a growing threat to the nation’s security.

In the 2006 presidential election, Fox’s party candidate, Felipe Calderón, was the narrow victor, but his leftist opponent, Andrés Manuel López Obrador, claimed fraud and his supporters blocked Mexico City’s streets for months. To assert his power, Calderón declared war on the drug cartels, with disastrous consequences. The estimates of the number of people killed or disappeared during his six-year term range between 60,000 and 100,000, most of them as a result of territorial wars between rival cartels. These gangs also set out to terrorize the population, bombing nightclubs, hanging bodies from highway bridges, and even leaving the heads of victims outside some schools.

The perception of a breakdown in law and order was one explanation for the PRI’s return to power in 2012: The PRI may have been corrupt, the saying went, but it knew how to govern. It also benefitted from the undisguised support of Mexico’s dominant television group, Televisa. Even then, its presidential candidate, Enrique Peña Nieto, was hardly given a national mandate. Because Mexico has only one round of presidential elections (unlike, say, Brazil), Peña Nieto won with just 38.2 percent of the vote, with López Obrador again in second place and Calderón’s own party candidate trailing in third.

At first, Peña Nieto’s boast that he was leading a “new PRI” seemed to carry some weight, above all when he dared to break the exploration monopoly of the country’s oil giant, Pemex, and to challenge the near-monopoly of the telecommunications billionaire Carlos Slim. But while a different approach to the drug war resulted in the capture of several leading capos, including the infamous Joaquín “El Chapo” Guzmán, the number of cartels has multiplied. Further, the old ogre of corruption returned: Peña Nieto’s wife bought a mansion with the help of a prominent businessman, and several PRI governors were caught enriching themselves. For many Mexicans, there was nothing new about this PRI.

Then Donald Trump appeared, with his insults toward Mexicans and his threat to build a wall along the common border. Peña Nieto tried appeasement, inviting Trump for hombre talks in Mexico City, only to find Trump resuming his flailing of Mexico immediately upon his return home. Given blossoming anti-American sentiments, Peña Nieto had no choice but to refuse to pay for any border wall, but he did persuade Trump to engage in talks to renew NAFTA rather than denounce the treaty.

On the eve of this September’s earthquakes, polls showed Peña Nieto’s approval rating at well below 20 percent, lower than any Mexican leader on record.

Will the seismic tremors push Mexico into another political earthquake? There’s reason for skepticism. This Mexico City earthquake, and the earlier major quake in southern Mexico, were less devastating than the 1985 quake, with the number of dead in the low hundreds, not the thousands. While some 40 buildings collapsed in the capital, including the wing of a packed primary school, the city as a whole remained intact, and Mexican authorities were better prepared than in 1985.

Once life returns to normal for all but the earthquakes’ victims, the issue consuming most Mexicans will be next July’s presidential elections. The political earth may again move because the current front-runner is the perennial leftist candidate López Obrador, known throughout Mexico by his initials of AMLO. Because his promises of sweeping economic and social reforms have alarmed the private sector and middle classes, the other three main parties are determined to stop him. But can parties of left, center and right agree on a “unity” candidate? If they fail, as seems likely, López Obrador could win with an even smaller percentage of votes than Peña Nieto won in 2012.

If the actual earthquakes and their aftermath reinforce public disenchantment with the political establishment, AMLO, with his cultivated image of the political outsider, could benefit. But even if by next July the disaster has been largely forgotten, and even if most Mexicans oppose him, enough voters may still opt for the unknown variable of a populist with a radical new message to elect him. And at that point, a new cycle of Mexican political instability will unavoidably begin.