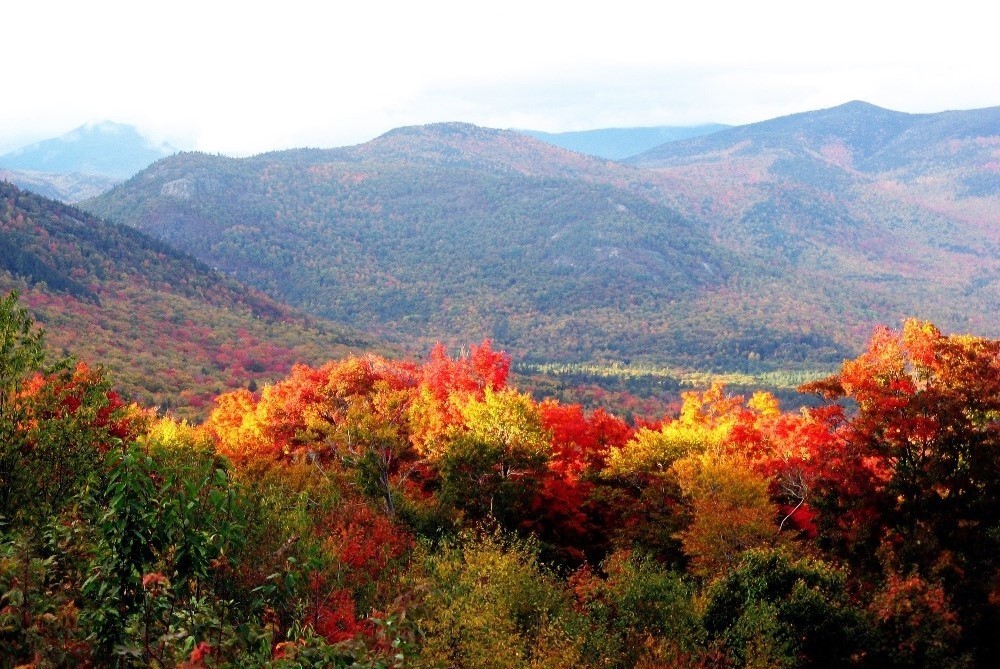 The migration north happens every fall. Just as the V-formations of Canada geese head south, flocks, groves, and busloads of “leaf peepers” head to northern New England from all over the globe. They come to watch the Green Mountains of Vermont and the White Mountains of New Hampshire “blush,” and soon discover that they are chasing a moving target.

Our wild palette of reds, purples, golds, oranges, and yellows infused with a backdrop of green is the result of the physical and metaphysical interplay of time and space. Geography mixes with topography, elevation, weather, and the shorter days of the fall season to wash across a unique ratio of deciduous trees to conifers that dates all the way back to the ancient glaciers that were once here.

The lush dark green backdrop to the changing of the leaves in New England is provided by the evergreens—those conifers—which include spruce, fir, and pine. The color comes from deciduous trees like oak and ash, which are found as far south as Virginia, and the hardwoods including sugar maple, yellow birch, and American beech, which are found only in the north. Each year, bands and pockets of these leafy trees form a moving Persian carpet rippling across the rugged, uneven topography of northern New England, changing every day and at every hour of the day for three short weeks.

“Senescence”—the term given to the changing colors of the leaves—is not what it appears: Leaves do not actually “turn” colors. In fact, the bright pigments are already hidden beneath the green. Shorter days and diminishing sunlight signal deciduous trees to slow down and eventually halt the production of chlorophyll. With the falloff in green chlorophyll, three pigments emerge—xanthophyll, reflecting yellow light; carotene, reflecting orange with some red and yellow light; and anthocyanin, reflecting red to purple.

With its flush of anthocyanins, the sugar maple is the star of the show—responsible for most of the cherry red and purple hues that spice up the northern forest palette. To give some idea of how “special” a New England fall is, in terms of color, while just 10 percent of tree species in the temperate zone produce anthocyanins, 70 percent of New England hardwoods produce anthocyanins. They only appear in late fall—just as the chlorophyll drops to 50 percent or below.

The poetic aspects of fall have led people to think that trees are “dying” when the leaves change colors. Senescence is not a passive aging that leads only to death; it is actually a sign of life—only living trees can transform green leaves to a dynamic wash of color. The precise color depends not only on the chlorophyll, but also on the complexion of metal ions and other hard-to-predict factors.

Topography and weather also contribute to the wild performance of color, as New England is a virtual internet of winding back roads that curve around lakes, streams, rivers, and up and down foothills and mountains in such a way that the landscape literally confronts the viewer at every turn.

Simultaneously, changes in elevation also result in a constantly changing palette. A cold night may happen in one mountain town early one year and late the next—or occur for one week in the mountains and not for several weeks in the valleys. The spatial and temporal variability make the color displays unpredictable from year to year, so there is always a bit of adventure in determining the best places and times to seek optimal viewing as the colors move across the landscape. 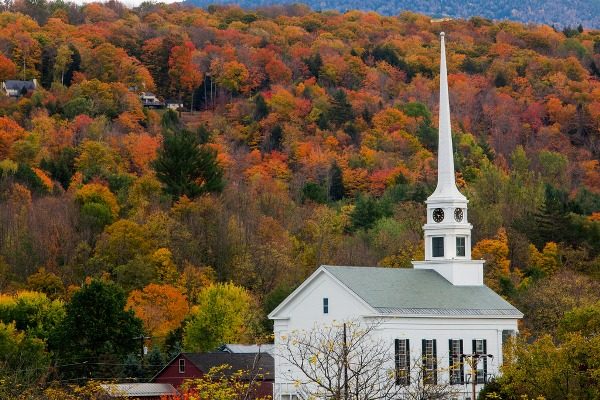 The most famous leaf peeping route in all of northern New England forms a loop that weaves in and out of the White Mountain National Forest, home to 100 mountains, 48 of them more than 4,000 feet high, including 6,288-foot Mount Washington—the tallest peak east of the Mississippi River. Some of the most dramatic views by far are from the Mount Washington Auto Road.

As you ascend Mount Washington, the Auto Road pulls off a unique trick: With each elevation of 1,000 feet, you are actually climbing north 250 miles in latitude, making the eight-mile road similar to a trip 1,500 miles north in latitude. Deciduous trees give way to conifers that give way to a virgin forest, home to miniature bonsai-type krummholz trees, bent by the continuous wind for hundreds of years. Driving from the base to the summit takes you, climate-wise, from New Hampshire to the Arctic Circle, and you’ll find an ancient alpine tundra up there.

Archeologically speaking, Mount Washington was at one time a massive ocean floor. Millions of years ago, tectonic plates slid under one another, moving and folding the sea floor into vast wrinkles of folding rock that you can see today all the way up the Auto Road.

Ultimately, what creates leaf season is the nearly 5 million acres of forest that make up 89 percent of New Hampshire’s total terrain—the state is the most forested in the contiguous United States.

Since 2010, the Forest Society has been actively engaged in defending New Hampshire’s scenic landscape—and its own conserved lands—from a 192-mile transmission line proposal known as Northern Pass, proposed by mega-utilities Hydro-Quebec and Eversource, a project designed to run transmissions lines on more than 1,000 towers well above tree line from the Canadian border in Pittsburg through the White Mountains to Franklin, Concord, and ending in Deerfield.

The impact of the Northern Pass is less about the number of acres that would be clear-cut than it is about far broader scenic impacts across miles and acres of cumulative wetlands and privately owned land.

Fall in New Hampshire is my favorite time of year. It is a time of chasing illusions as each year leaf peepers “weigh in” on comparing “this year” to “last year.” But surmising about whether an early spring or a wet spring or that sudden frost influenced the yellows or the reds, the oranges or the purples is part of the nostalgia of autumn in New England.

Fall is our most sentimental season because Nature talks to us so openly—in wind, in color, and in the wash of rain or snow that one day takes it all away. Fall is about the death of leaves, but it is also about the real mortality of us all, the irrevocable fact that the one thing we cannot change is change itself—and nowhere is change so consistently visible than three weeks every autumn in New England. It is the glory before the barrenness of winter, the shout before the silence of hibernation. It is timeless because it marks time so clearly.

More than any other, fall is a season of saints and poets. Emily, in Thornton Wilder’s timeless play “Our Town,” set in the fictional New Hampshire town of Grover’s Corners, asks the stage manager: “Do human beings ever realize life while they live it?” He sighs: “No. Saints and poets—maybe. They do some.”

The leaves, like the saints and poets, remind us to look, to notice, to embrace the passage of time like the wind, to acknowledge it and celebrate it and be grateful—just for noticing—for finding the Zen of the present moment without concern for the past or fear of the future.

The tapestry of color says, “Now.”