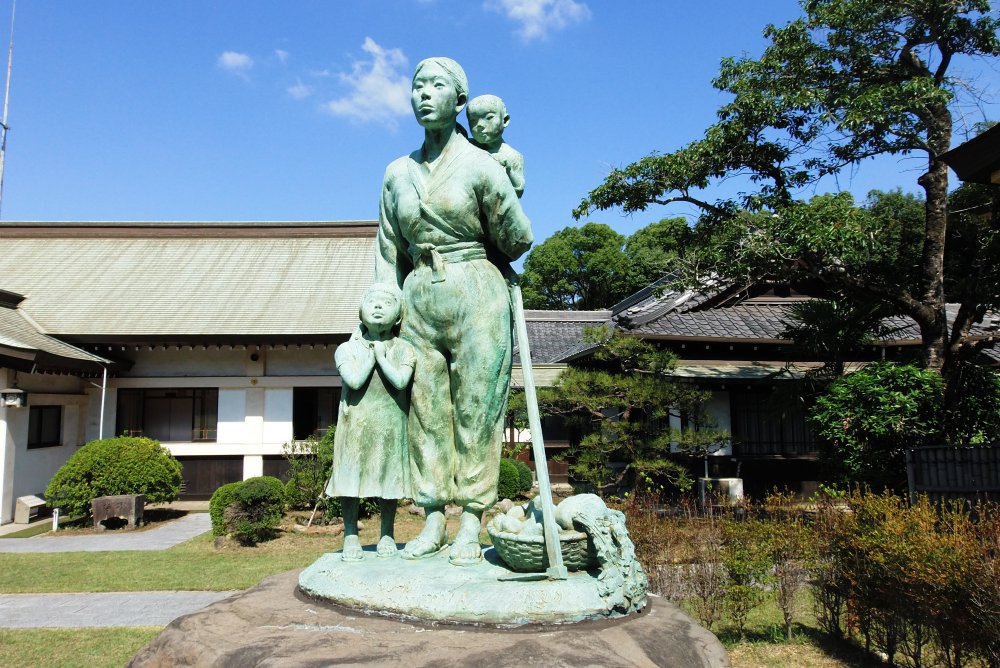 A statue of a mother and her children mourning the death of the soldier husband and father. This statue is in a Shinto shrine that memorializes every soldier from Oita prefecture who died in the war. Photo by Edgar A. Porter.

In the spring of 1976, while visiting the Tokyo Zoo, I was confronted with the unforgettable sight of an aging former Japanese soldier, wearing a ragged army uniform and cap, and bowing before all who entered.

One of his legs had been amputated. A begging bowl before him, he bowed as low as he could to Japanese families coming to see the newly arrived pandas. A few placed coins in his bowl quickly and moved on. It was a shockingly sad sight, with an aura of shame, silence, and neglect surrounding him.

I reacted strongly in part because I had recently visited China. There I was struck by the self-confidence exhibited by the men and women of the military, whether walking down the street or in military formation. The people, in turn, spoke with respect and pride of the older generation who had fought in what they called “our” People’s Liberation Army.

Watching this former Japanese soldier, I found myself thinking: Whether a country wins or loses dictates society’s response to war. Of course, this is not a new observation, nor is it unique to Japan. But that does not lessen the power of the phenomenon, or the pain of defeat experienced by a Japanese society that puts so much emphasis on collective effort and shame.

A lost war created a particularly shaken culture of quiet despair in Japan. So when I am asked today, after living in Japan for 10 years, how it is that many Japanese still refuse to acknowledge their country’s role in bringing misery to so many people through its 1931 invasion of Manchuria, and later occupation of greater China, Singapore, the Philippines, and elsewhere during what the Japanese call The Pacific War, I think of that old soldier whose presence brought such distress to his fellow Japanese.

For several years my wife and I interviewed dozens of ordinary people for a book about Japan during World War II and the American Occupation. These conversations helped me see the old soldier again, this time from the viewpoint of Japanese still struggling with a legacy of shame mixed with forgetfulness.

Through them I could hear those families walk by the old soldier asking, “Why are you here to remind us of our loss and humiliation?” “Why did you come back but not my father, my brother, my son?” And why, to put a hard point to it, did he not commit suicide like so many others?

I came to realize that the soldier represented a depth of shame that sowed seeds for the generations that came after the war. And that shame was both infectious—touching younger generations who had no experience of the war—and normal.

This peculiar normalcy of shame mixed with faded memory has been encouraged for decades by the Japanese national elite in the political, education, business, and journalism fields. One reason for this is that many of the elite are themselves direct descendants of war era leaders. They are not predisposed to have their family members, or the names of their companies, affiliated negatively with either the atrocities, or the loss, of that war.

The Japanese media rarely challenge the government directly. With the exception of a few representatives from the press, such as the “Asahi Shimbun,” most have avoided analyzing critically what happened during the war so as not to lose access to government and business officials. 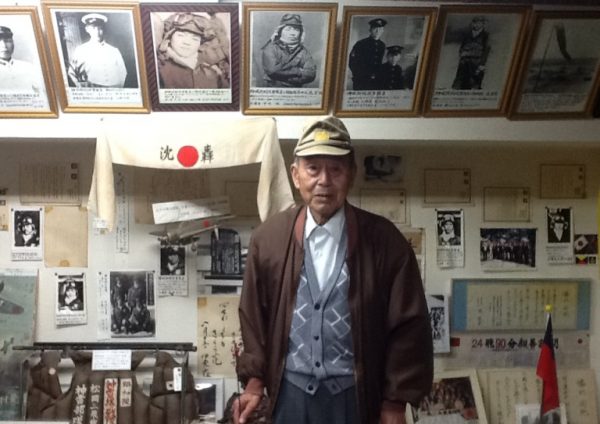 Kiichi Kawano is a former kamikaze pilot. Scheduled to fly out on a mission the day after the war ended, he has built a private museum in his basement to memorialize his comrades who died. Photo by Edgar A. Porter

The people’s willingness to follow the example of these elites should come as no surprise, for in the years immediately following the war, hunger and despondency stalked the country. The elites, in concert with the American Occupation forces, put their efforts into rebuilding the country. There was little energy left to reflect on the past, even if anyone had been predisposed to do so.

As factories and homes were built, or rebuilt, and infrastructure put in place, Japan experienced a growing optimism. By the time of the 1964 Tokyo Olympics, the country was justly proud of its achievements. The shame brought by the war never disappeared, but receded into the background of public discourse, where it lay for decades in the minds of many.

But not all. Despite the absence of any vibrant public debate, there have always been those who insisted on uncovering uncomfortable truths about their history. These efforts typically came from the grassroots: Local historical associations publish memoirs of war survivors and construct war memorial museums (almost universally called Peace Museums), and progressive teachers have gone beyond the authorized texts to guide their students on discoveries about the war years. Authors such as novelist Shusaku Endo and historian Eri Hotta have tackled painful and secretive war events.

Finally, individuals such as the ones we interviewed for our book have shined a light on those terrible years, climbing over the wall of shame and silence to educate as best they can, with limited resources and often without the encouragement of family or community.

But all of these efforts exist at the margins, because the national narrative still has a chilling effect on getting to the deeper, more complex story.

Two former soldiers we spoke with showed the difficulty of piecing together a more complete story. The first man spent part of a morning sharing with us the lives of both his family and himself as a combatant during the war. But toward the end of the interview, when we asked him to pose for a photo holding a family heirloom battle flag his brother had carried during the war, he refused. He said it would be disrespectful and shameful to have his photo taken with the flag, as it would seem to honor Japan’s defeat.

In the years immediately following the war, hunger and despondency stalked the country … There was little energy left to reflect on the past, even if anyone had been predisposed to do so.

The other man told us of his disbelief and desolation when, in Indonesia at the end of the war, he heard that Japan was defeated. Upon returning home after over a year as a detainee held by allied forces, he shuttered himself in the family home. The depression and shame brought on by the startling failure of their cause, and his humiliation that he had lived when so many of his friends had died, only began to lift two years later. Even after leaving his house, he could not cope with seeing American Occupation forces walking around his town of Beppu. He occasionally fought with them, landed in jail, and spent years in and out of trouble.

He explained that he only began to confront his anger and shame when his granddaughter asked him to tell her what he did during the war. It was a class assignment from her teacher, one of those few who pushed the students to get out and learn more about their own history.

Japan’s reluctance to address its history directly places it in a large camp of like-minded states. Growing up in the American South, my textbooks never honestly described the history or horror of slavery. The Chinese government censors many details of the Cultural Revolution and the full story of the Tiananmen protests and eventual killings of 1989. Under Putin, the Russian government discourages discussion of Stalin’s brutality, such as the authorized population displacements and famine of the 1930s. And Turkey to this day refuses to acknowledge the full extent of its slaughter of the Armenian people in the early 20th century.

But Japan need not remain in this camp. It can follow another model, that of its former ally, Germany.

The German government has established Documentation Centers around the country which detail, without ambiguity, the development and consequences of National Socialism and the Nazi Party. In Japan the closest examples of Documentation Centers are the small, community-based Peace Museums dotting the country. Unlike the German centers, however, the message in these museums is mixed. While all emphasize the need to learn from the horror of the war by promoting world peace, they avoid in depth discussion of how, and why, Japan went to war. Instead they honor their own civilian and military dead, following the general story line of Japan as victim.

While Japanese children still study texts that mention the war only briefly, German schoolchildren find an honest and transparent rendering of the role Nazis, and by inference members of their own families, played in the deaths of millions of people. It is not left to individual teachers and private citizens to fill this void.

I think that the aging soldier I saw at the gate of the Tokyo Zoo 40 years ago represented both the past and future of Japan. Going off to war he was a hero. But upon return he only served as a reminder of the misguided and horrific tragedy orchestrated by the militarist government of war time Japan.

Through truth telling and reconciliation, current and future generations can uncover layers of hidden history and be freed of the national shame and humiliation. We encountered many Japanese who want to move in this direction. What they hope for is a national leadership that will find inspiration from them and follow suit.