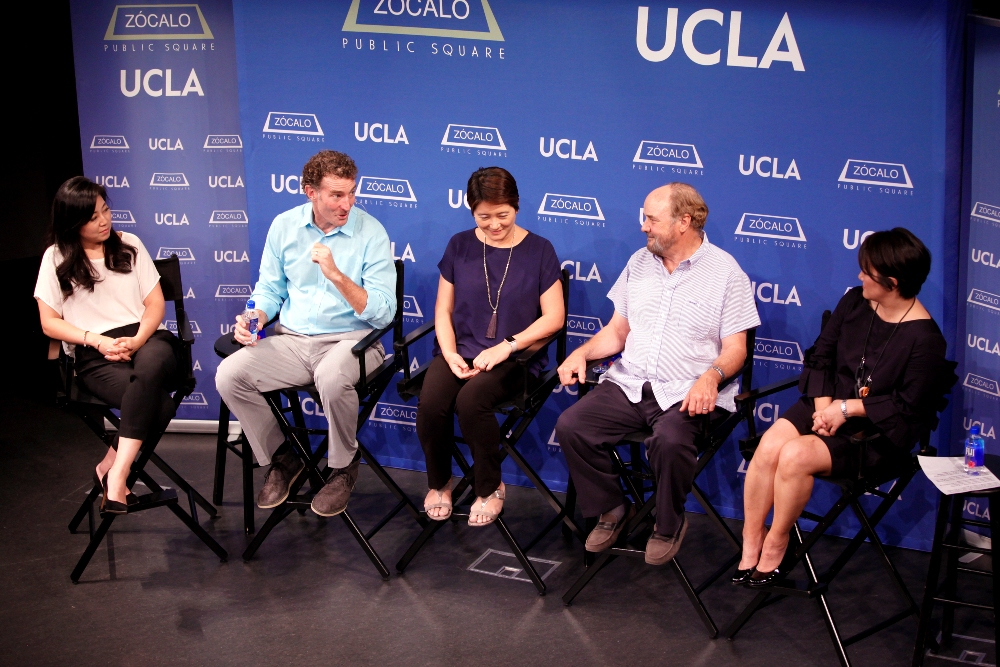 With schoolyard taunts hurtling between Washington and Pyongyang, and fears of nuclear Armageddon escalating from Seoul to Tokyo to Los Angeles, the once-unthinkable idea of a military showdown between North Korea and the United States has become frighteningly plausible.

On an October evening when many Angelenos were pondering the opening game of the World Series rather than end-of-the-world scenarios, a Zócalo/UCLA panel discussion explored the question, “Is War With North Korea Inevitable?” By the end of an intense hour-long discussion at the National Center for the Preservation of Democracy in downtown Los Angeles, the consensus was that a catastrophic confrontation isn’t unavoidable. But to lower the odds of it happening, America’s policymakers and its public need a more nuanced and humanistic perspective on the reclusive rogue Asian nation, the panelists said.

As President Donald Trump and North Korean ruler Kim Jong Un have waged a battle of insults this year, Western attention has focused on the dueling egos and chest-thumping rhetoric of the two leaders. But the panelists stressed instead the importance of understanding Korea’s complex history, the motivations and fears driving its leadership, and the yearnings and hardships of its 25 million people.

Suk-Young Kim—a South Korea native who is a professor and cultural researcher at UCLA’s School of Theater, Film, and Television, and an expert on North Korean propaganda—said that North Koreans are a very proud people who crave respect from the outside world. Their country’s well-oiled propaganda machine encourages North Koreans to see themselves as the true protectors of Korea’s historic and cultural essence—and to view their South Korean neighbors as the lapdogs of an imperialistic United States, she said.

Despite the suffering inflicted on North Koreans by their own regime, and further imposed on them by Western economic sanctions, “Pride is what keeps them going,” Kim said. And if it’s the case that the North Korean state dehumanizes Americans—who often are depicted as sadistic, war-mongering barbarians in official propaganda—the American media likewise tends to stereotype North Koreans as a monolithic, brainwashed population in thrall to a demagogic madman, she suggested.

Hannah Song, President and CEO of Liberty in North Korea, an international NGO that helps North Korean refugees with escape and resettlement, said the United States and the West need to develop a “holistic understanding” of North Korea, cognizant of the important economic, social, and informational changes that have swept the country in recent decades, such as the epic 1990s famine.

Prior to that government-abetted disaster, the North Korean state was at the center of everything, Song said. Since the famine, during which some starving North Koreans were reduced to eating tree bark, North Korea’s relatively miniscule but growing economic markets have taken on a much more important role. The famine also exposed the profound inequalities between the lives of ordinary North Koreans and the ruling military and political elite. Refugees fleeing famine conditions bolstered the population of roughly 30,000 North Koreans now living in South Korea, where, as outsiders, they often face harsh discrimination and are stereotyped as backward by the South Koreans.

Since the famine, ordinary North Korean citizens’ knowledge of the outside world has increased, said Song, adding: “A lot of people don’t realize that North Korea has really changed a lot in the last 20 years on the ground level.” Song said that the vast majority of North Korean refugees who work with her NGO have little or no interest in Kim Jong Un’s machinations. They’re far more concerned about sending money back to their family members in the north, and trying to adjust to the competitive rigors of South Korea’s capitalist system.

Citing an old Korean proverb about survival, moderator Jean H. Lee, a journalist and former Pyongyang Bureau Chief for the Associated Press, asked the panelists how Korea’s historically precarious position in a tough part of the world has shaped its identity.

John B. Duncan, a UCLA scholar of Korean history, said one reason Koreans are so proud is because they’ve lived for 2,000 years under the shadow of an economic, military, and cultural giant—China, which at times has looked down on Korea while trumpeting the presumed superiority of Chinese culture. For their part, Koreans—north and south—have responded by asserting their own nationalistic pride, Duncan said. (Later during the panel, Duncan noted that North Korea was outpacing South Korea in per capita income until the latter part of the 1970s.)

But even if North Korea can’t be judged solely by the outlandish acts of its young leader, the panelists agreed that the potential for a resumption of war exists on the Korean peninsula, particularly as North Korea has accelerated its testing of intercontinental ballistic missiles, while boasting about its development of atomic weapons.

Since the famine, ordinary North Korean citizens’ knowledge of the outside world has increased, said Song, adding: “A lot of people don’t realize that North Korea has really changed a lot in the last 20 years on the ground level.”

Paul Carroll, the senior advisor at N Square, a nuclear disarmament and nonproliferation collaborative, said that the United States must learn to live with North Korea “as it is, not as how we wish it to be.”

“We need to assume that North Korea could make a nuclear weapon with a ballistic missile that can reach North America,” he said. “Their pace also shows that they are doubling down.”

Lee, the moderator, asked how President Trump factors into this equation—she didn’t specifically mention his derisive nickname for Kim Jong Un (“Little Rocket Man”) or his declaration last month at the United Nations that if the United States “is forced to defend itself or its allies, we will have no choice but to totally destroy North Korea.”
Carroll shot back in response: “He’s not helping.”

Duncan, who was stationed in Korea in the 1960s while serving with the U.S. Army, said that period also was marked by severe tensions, as a flurry of North Korean cross-border attacks killed South Korean and U.S. troops. That decade’s tensions culminated in the January 1968 seizure by North Korean forces of the USS Pueblo, a U.S. Navy spy ship.

“I was in the U.S. Army, and we thought we were going to war,” said Duncan, who credited the avoidance of war to the restraint shown by President Lyndon B. Johnson.

“I hope the current occupant of the White House shows the same good sense,” Duncan said.

During a question-and-answer session with the audience, one attendee asked how much influence China could wield in holding back North Korea from war. Not a lot, the panelists said, despite the two countries’ historical symbiosis and North Korea’s role as a buffer state between China and its Japanese rival, as well as the Western powers.

A final audience question asked the panelists to review the question that had framed the discussion: Is war inevitable?

“Let me say this: Kim Jong Un will not fire first,” Duncan replied.

Carroll said that “inevitable is a pretty high bar” to set, but human behavior is harder to calculate, and we could blunder into war by accident or misunderstanding.

“Humans are incredibly fallible,” he said. “The odds need to be lower.” 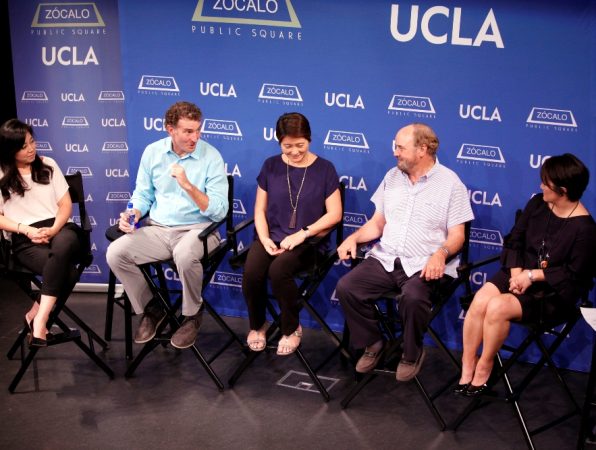 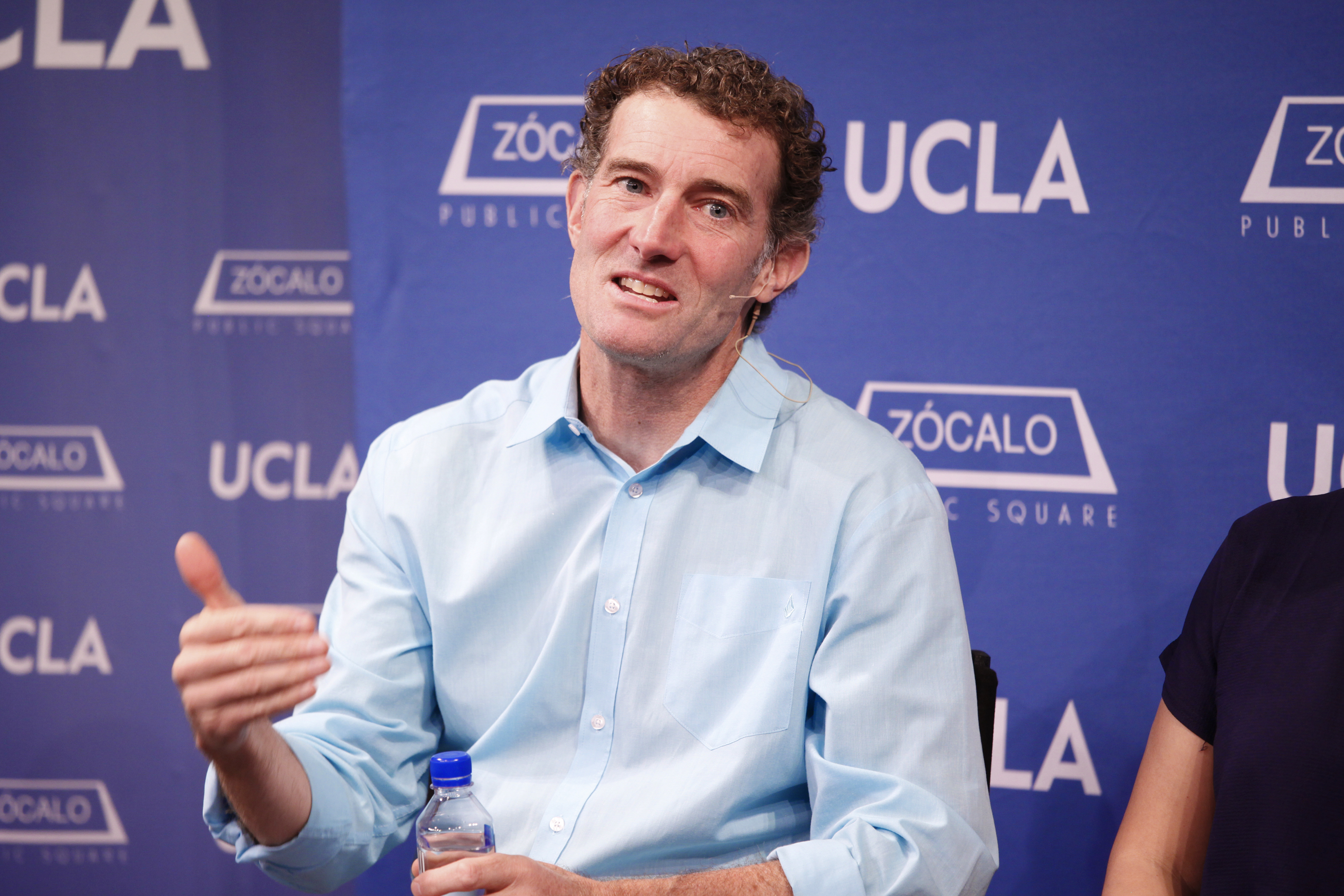 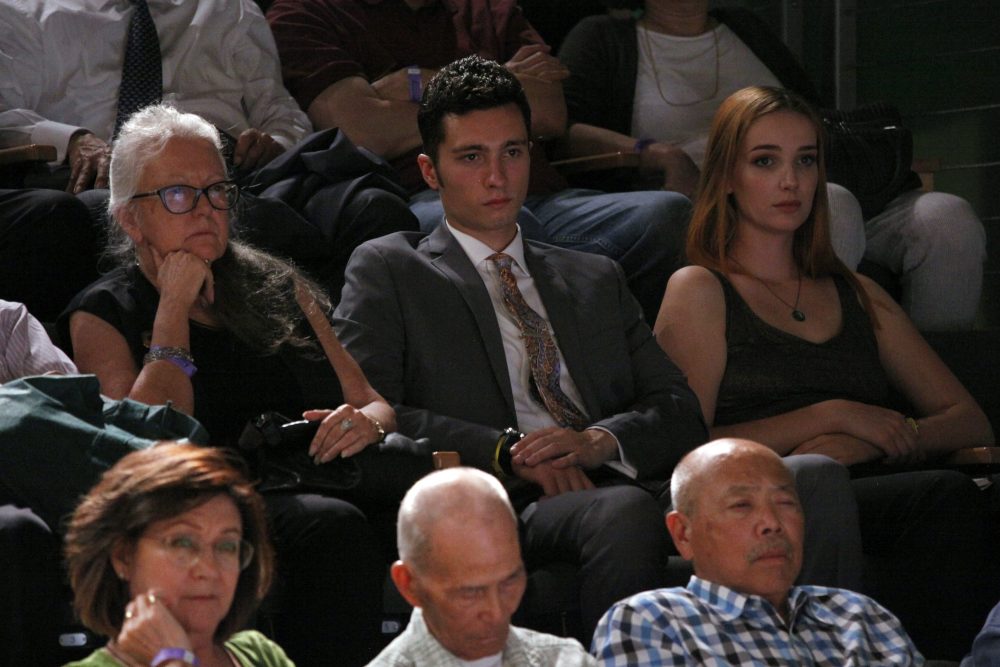 An engaged crowd at the National Center for the Preservation of Democracy. 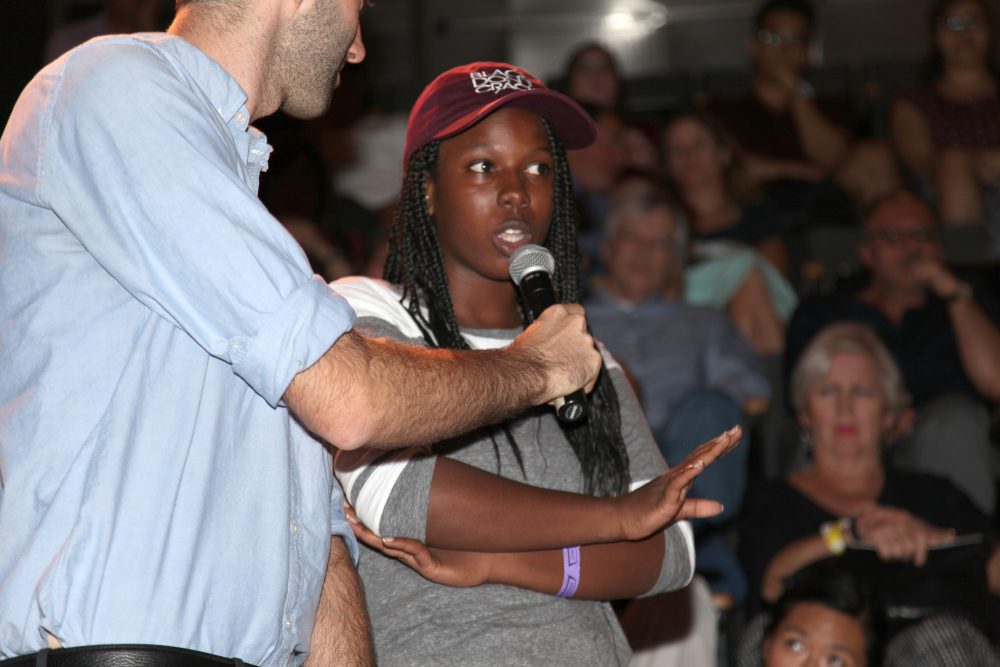 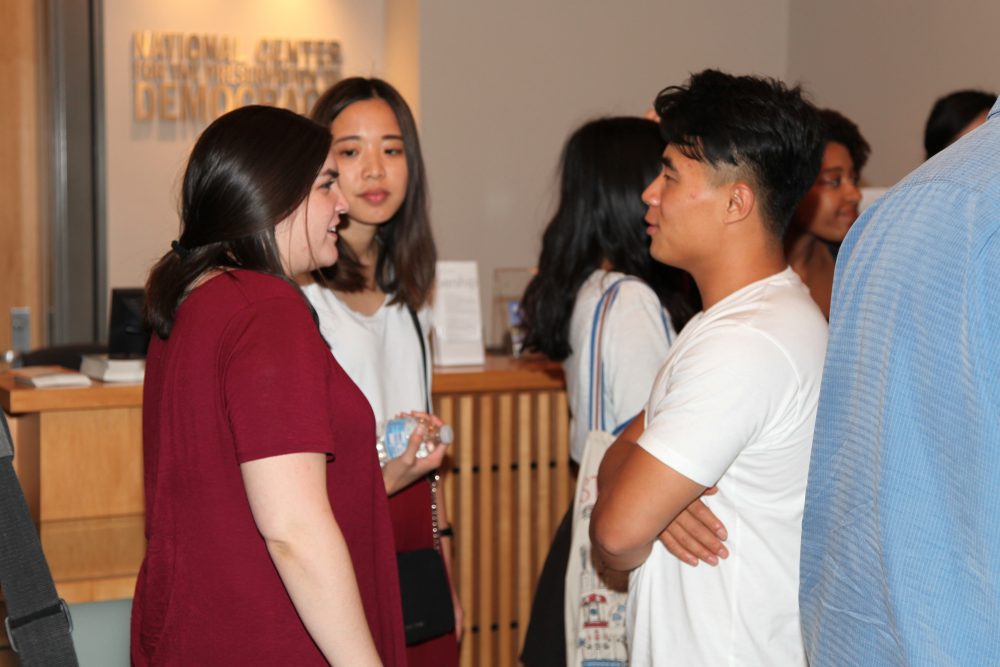 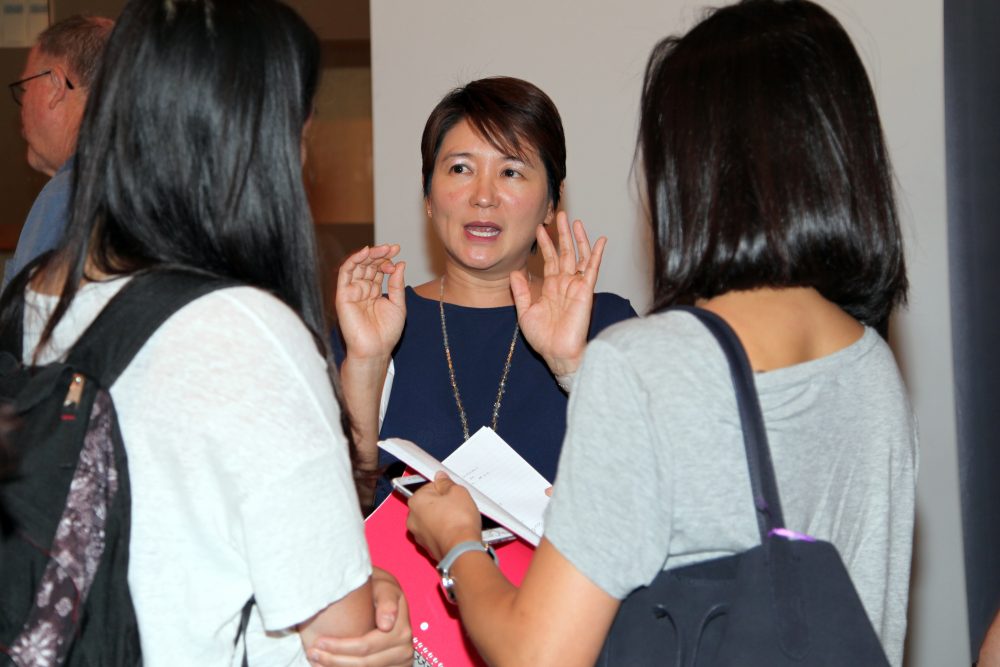