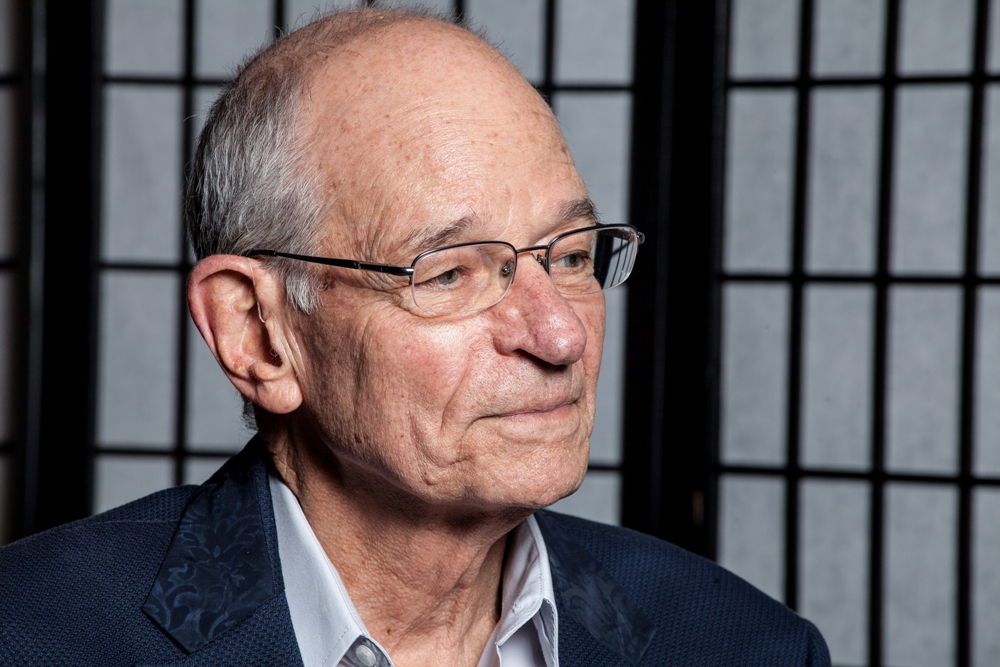 Warren Olney, the dean of Southern California journalists, is the host and executive producer of the nationally syndicated public radio program “To the Point” originating from KCRW in Santa Monica. Previously a prominent TV journalist, he also hosted “Which Way, LA?”, KCRW’s signature daily local news program, from 1992 until 2016. Before moderating a Zócalo/KCRW “Critical Thinking With Warren Olney’” event, titled “What Does Treason Look Like?” at the National Center for the Preservation of Democracy in downtown Los Angeles, he discussed driving, TV news, and changes in Los Angeles.

What’s the closest you’ve ever been to treason?

I was drafted into the army in 1963 and I loathed and despised the Army. It was an interruption in my life that happened because someone I recognized in the street and spoke to quickly realized that I had become delinquent in my selective service. So I became an expert marksman thinking of him. But I don’t think that’s treason—that was much more personal.

What sound do you wake up to? First sound?

What would be your last meal?

I think I’d have a chocolate smoothie.

What freeway do you avoid at all costs?

The one I avoid most assiduously is, unfortunately, the one I have to take the most, which is the 10.

What do you miss most about TV news?

I miss making little movies, and doing investigative stories, and using the sound and the pictures in an effective way and telling a story with them. Channel 2 is why I came to L.A. way back when—it had the reputation of being the best place to do this, and I wanted to learn how to do it right, and I did. What I disliked most about TV news was anchoring.

What’s your favorite memory from Amherst?

It’s when my first child was born. I was the first and for a while the only student I knew at Amherst to be married and have children. As far as the college, I remember a professor named Benjamin Demott. I admired him very much, and he did a lot of reporting, for Harper’s, and covered the civil rights movement.

What aspect of Los Angeles has improved most since your arrival?

I think there’s a vitality about it that I didn’t see when I first got here. When I first got here, Sam Yorty was mayor, and it was very much—it appeared to me—by comparison to the Bay Area, full of people who had come from the Midwest who were bigoted and small-minded. Not that everyone from the Midwest is bigoted and small-minded. It just seemed to me dreary. Then Tom Bradley got elected, and he recognized it was such a diverse place. When he first announced his staff, he announced them in terms of religion, race, and country of origin, and started talking about Los Angeles as a world city. I hadn’t heard that term before. I was really quite surprised by it.

Daryl Gates once said if there’s a disturbance somewhere in the world, the components of it are in Los Angeles, often within a few blocks. Yet they often don’t fight with each other here … That’s one of the few good things I ever heard Daryl Gates say.

The name Warren Olney has a lot of distinguished California and legal history to it. What does having that name mean to you?

I’m Warren Olney IV. My great-grandfather Warren Olney, Sr. grew up in Iowa, the son of a blacksmith, fought for the Union and became an officer of colored troops, which was punishable by death by the Confederacy. He then went to law school in Michigan, and for reasons I don’t really know, decided to come to California to seek his fortune. He became a friend of John Muir and helped found the Sierra Club, and served as mayor of Oakland.

He had an interesting dispute with his son Warren Jr., my grandfather, over the Hetch Hetchy Reservoir. My grandfather was also a lawyer and was on the California Supreme Court, although only quite briefly, because he could not afford it.

My father Warren III went to law school, and when he took the bar, the oral exam had you go in with another person, and that person was Pat Brown. The first question was: Who was the first person to codify the rules of civil procedure in the state of California? He didn’t know the answer—but it was his own grandfather, Warren Sr. And Pat Brown told that story for years.

My father worked for Earl Warren when he was D.A. of Alameda County, and when he was attorney general, and then was head of the criminal division of the Justice Department in the Eisenhower administration and created the civil rights division.

I’m very proud of my heritage, but I’m a journalist. I couldn’t stand law school.