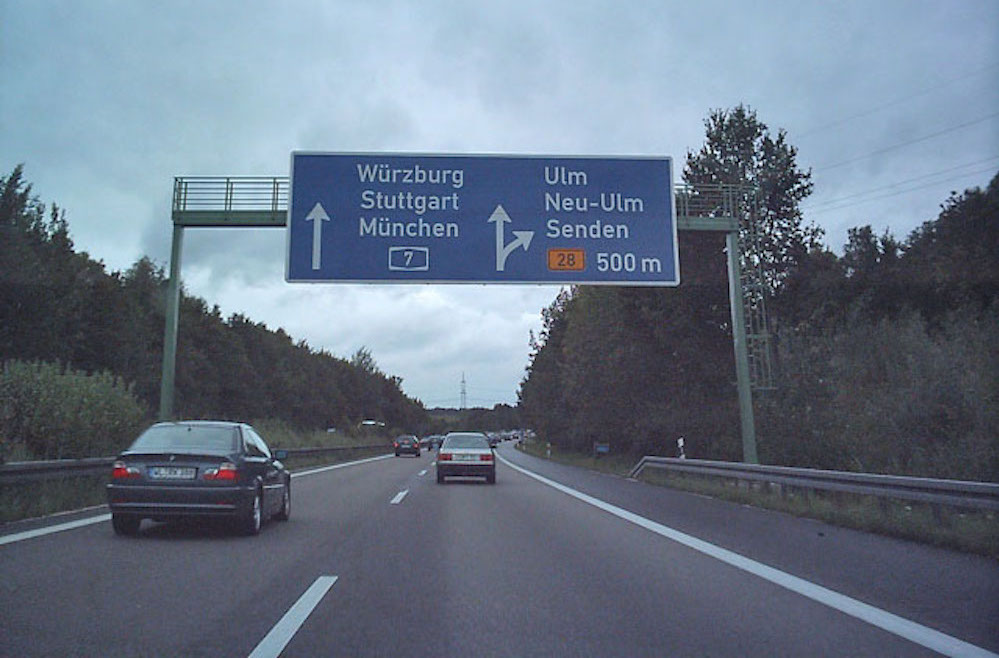 In an epic act of self-harm, Britain has voted to leave the European Union. The British people have voted to sever ties with their largest trading partner, ending freedom of movement and trade between Britain and mainland Europe. This means I have to put stickers on my car.

The stickers are for my headlights because the lights of British cars are angled to point away from oncoming traffic: that is, to the right. In Europe, where they drive on the right, my British headlights will blind passing drivers. Applying reflective stickers on my lights will change me from a pariah to a law-abiding citizen of the EU.

And that is important because, with our baby and possessions, my wife and I are about to drive off the Channel Tunnel train, on which we are currently rattling from England to France, and onto a European road. We are a new thing: Brexpats. We are leaving Britain in the hopes of finding a new home in Germany. But it’s not a sure thing that they will take us. As the U.K. prepares to leave the EU on March 29, 2019, under terms nobody can predict, the clock is ticking for us to establish ourselves in Europe as firmly as possible.

I wonder how my small family will survive the turning of these great gears of history. We are British, though, so we don’t mention our anxiety directly. We prefer to reveal it through overreactions to minor difficulties.

“You might prefer me to do the first leg of the driving in France,” says my wife from the passenger seat. “It’s terrifying.”

My wife explains: “When you come out of the train, you go round this funny roundabout thing, and suddenly you’re on the wrong side of the road.” The baby starts to cry. “It’s okay, sweetie darling,” coos my wife.

The baby begins to bellow. My wife opens her door and clambers into the back seat. I peel off the sticker and peer at the offending British bulb.

“In the diagram the light is flat, but in real life it has a really slanty case!” I fret.

“Just bung it on, we’re slowing down.”

Brexit forced me to decide that I am a European before I’m a Brit. I made that choice because I am inspired by, and want to contribute to, the cooperative spirit of the European Union.

The train stops. The doors open. The car in front starts its engine. I crumple up the instructions and look at my wife in the back seat. The baby is casually chewing her nipple.

“I thought you were going to negotiate the terrifying roundabout?” I protest.

“You’ll have to get on with it!” she shouts and slams the door.

Cringing and flinching, I creep the car over the clanging threshold of the train-shed. Some chatting officials look far too nonchalant for their own good. They have no idea; I’m a new driver. I’m going to crash out of panic on the roundabout of terror, with my baby in the back!

This move is going to be a disaster.

I’ve almost got my eyes closed … but no roundabout appears. Just straight road, and a breezy reminder: REMEMBER TO DRIVE ON THE RIGHT. Turning left for the first time, I remember to cross the traffic rather than drive into it. My lights have been corrected; I’m blinding no one. I’m flooded with optimism.

This move is going to be a great success.

After the rigmarole of traversing Britain’s moat, the drive to Berlin is basically one road through four countries. The French A16 becomes the Belgian E40; the Belgian E34 becomes the Dutch A67, which becomes the German A40. As I drive from one country to the next, I find myself lazily judging the people by the quality of their roads:

French roads are badly kept and not at all as nice as British ones. They have weeds and illegible, faded signs. This makes the French an irresponsible people.

The Dutch roads are clean, much like the Belgian ones. Lots of places ending in “-hoven,” which makes me think of Beethoven. The Dutch are a musical people. And windmills—old ones that make you think of clogs. The Dutch are a wooden people.

I find these thoughts deeply disturbing. I reassure myself that suspicion of foreigners is an intrinsic part of being human. But I can’t help feeling an uneasy connection to those of my British compatriots who voted for Brexit—millions of them—because they didn’t like the idea of foreigners coming to Britain to live and work.

I am dealing with my fear of the strange by making instant, comforting judgments. I am revealing in myself the very attitudes that have led me to flee Brexit, as I am fleeing it.

Brexit forced me to decide that I am a European before I’m a Brit. I made that choice because I am inspired by, and want to contribute to, the cooperative spirit of the European Union. It’s that spirit of cooperation in which I want my daughter to flourish. Which is why we are on the road to Germany, and why my wife and I hope to establish ourselves in German life as much as possible before March 29, 2019. At that point, we may well have no claim to live in Germany, since we will no longer be citizens of the EU. We will have to argue for our continued residency there. Because we are both freelance, it will be difficult to cite jobs or job offers in our favor. We are likely to be deported back to the U.K.

The mainstream, right-wing British press characterize people such as myself, who embrace the EU and wish the U.K. to remain a member, as “remoaners,” “saboteurs,” “enemies of the people,” and “traitors.” The irony of being a migrant from anti-migrant Brexit Britain is matched only by the irony of being dragged back there by the very people whose views make me persona non grata.

When faced with the suspicious questioning of right-leaning friends and relatives, I have a convenient excuse for moving to Germany: My wife is an opera singer. Britain has five major opera houses, whereas the German-speaking world has closer to 85.

However, I’m not moving just to support her (as much as I like to claim that in arguments). I have been desolated by the architects of Brexit. I am infuriated by the short-sightedness of my countrymen, whose prejudice allowed them to be hoodwinked, and who will suffer hardship as a direct result.

Yet my fierce desire that Britain remain an open, tolerant, and prosperous country gives me a deep sense of shame as I leave it. “All evil needs to triumph is that good men do nothing.” This idea has been plaguing me. I never feel more defined by my Britishness than when I am abroad, so being in Germany only makes me more painfully conscious of it. I want to coin a new term to describe my bitter situation: “Brexpatriotism.” But what’s patriotic about abandoning your country to criminals? Can I cast myself as one of these “good men” as I do nothing?

As I run from the field to stand on the sidelines, I have to acknowledge that I’m not necessarily putting myself in a less precarious position than I had been in Britain. Angela Merkel has yet to form a coalition in the face of a resurgence of the far-right in Germany. Running is no real strategy: That’s why Brexpatriotism is an illusion, and just another attempt at self-comfort.

I’m escaping to Europe, for a year at least. Perhaps, if my plucky Nissan and I are dragged back to my car crash of a homeland, I’ll have enough fire in my belly to join the fight.