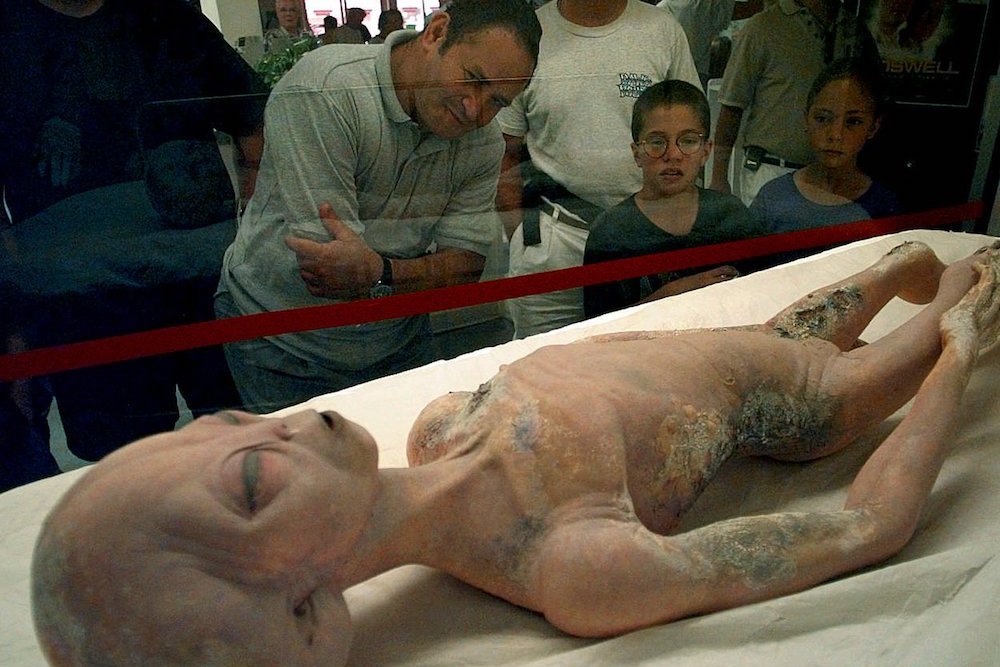 As technologies of flight evolve, so do the descriptions of unidentified flying objects. The pattern has held in the 21st century as sightings of drone-like objects are reported, drawing concern from military and intelligence officials about possible security threats.

While puzzling over the appearance of curious things overhead may be a constant, how we have done so has changed over time, as the people doing the puzzling change. In every instance of reporting UFOs, observers have called on their personal experiences and prevailing knowledge of world events to make sense of these nebulous apparitions. In other words, affairs here on earth have consistently colored our perceptions of what is going on over our heads.

Reports of weird, wondrous, and worrying objects in the skies date to ancient times. Well into the 17th century, marvels such as comets and meteors were viewed through the prism of religion—as portents from the gods and, as such, interpreted as holy communications.

By the 19th century, however, “celestial wonders” had lost most of their miraculous aura. Instead, the age of industrialization transferred its awe onto products of human ingenuity. The steamboat, the locomotive, photography, telegraphy, and the ocean liner were all hailed as “modern wonders” by news outlets and advertisers. All instilled a widespread sense of progress—and opened the door to speculation about whether objects in the sky signaled more changes.

Yet nothing fueled the imagination more than the possibility of human flight. In the giddy atmosphere of the 19th century, the prospect of someone soon achieving it inspired newspapers to report on tinkerers and entrepreneurs boasting of their supposed successes.

The wave of mysterious airship sightings that began in 1896 did not trigger widespread fear. The accepted explanation for these aircraft was terrestrial and quaint: Some ingenious eccentric had built a device and was testing its capabilities.

But during the first two decades of the 20th century, things changed. As European powers expanded their militaries and nationalist movements sparked unrest, the likelihood of war prompted anxiety about invasion. The world saw Germany—home of the newly developed Zeppelin—as the likeliest aggressor. Military strategists, politicians, and newspapers in Great Britain warned of imminent attack by Zeppelins.

The result was a series of phantom Zeppelin sightings by panicked citizens throughout the United Kingdom, Australia, and New Zealand in 1909, then again in 1912 and 1913. When war broke out in August 1914, it sparked a new, more intense wave of sightings. Wartime reports also came in from Canada, South Africa, and the United States. In England, rumors that German spies had established secret Zeppelin hangars on British soil led vigilantes to scour the countryside.

In the age of aviation, war and fear of war have consistently fueled reports of unidentified flying objects. A year after Nazi Germany’s surrender, Sweden was beset by at least a thousand accounts of peculiar, fast-moving objects in the sky. Starting in May 1946, residents described seeing missile- or rocket-like objects in flight, which were dubbed “ghost rockets” because of their fleeting nature. Rockets peppering Swedish skies was well within the realm of possibility—in 1943 and 1944, a number of V-1 and V-2 rockets launched from Germany had inadvertently crashed in the country.

At first, intelligence officials in Scandinavia, Britain, and the United States took the threat of ghost rockets seriously, suspecting that the Soviets might be experimenting with German rockets they had captured. By the autumn of 1946, however, they had concluded it was a case of postwar mass hysteria.

A year after Nazi Germany’s surrender, Sweden was beset by at least a thousand accounts of peculiar, fast-moving objects in the sky.

The following summer, a private pilot by the name of Kenneth Arnold claimed to have seen nine flat objects flying in close formation near Mt. Rainier. Looking back on the event years later, Arnold noted, “What startled me most at this point was the fact that I could not find any tails on them. I felt sure that, being jets, they had tails, but figured they must be camouflaged in some way so that my eyesight could not perceive them. I knew the Air Force was very artful in the knowledge and use of camouflage.”

Given the name “flying saucers” by an Associated Press correspondent, they quickly appeared throughout the United States. Over the following two weeks, newspapers covered hundreds of sightings.

News of these reports circled the globe. Soon, sightings occurred in Europe and South America. In the wake of Hiroshima and Nagasaki, atomic bomb tests, and tensions between the United States and the USSR, speculation ran rampant.

Finding themselves on the front line of the Cold War, Germans on both sides of the Iron Curtain considered the United States the most likely culprit. West Germans thought the discs were experimental missiles or military aircraft, while Germans in the communist Eastern bloc considered it more likely that the whole thing was a hoax devised by the American defense industry to whip up support for a bloated budget.

Others had more elaborate theories. In 1950, former U.S. Marine Air Corps Major Donald Keyhoe published an article and book titled The Flying Saucers Are Real, in which he contended that aliens from another planet were behind the appearance of the UFOs. Based on information from his informants, Keyhoe contended that government authorities were aware of this, but wished to keep the matter a secret for fear of inciting a general panic.

Such a claim about UFOs was new. To be sure, at the turn of the century during the phantom airship waves, some had speculated that the vessels spotted might be from another planet. Already at that time, people were deeply interested in reports of prominent astronomers observing artificial “canals” and structures on Mars. Evidence of Martian civilizations made it seem conceivable that our interplanetary neighbors had finally decided to pay us a visit. Still, relatively few bought into this line of reasoning.

But by going further, Major Keyhoe struck a chord in a timely fashion. In the aftermath of World War II and over the course of the 1950s, it seemed that science and engineering were making remarkable strides. In particular, the development of guided rockets and missiles, jet airplanes, atomic and hydrogen bombs, nuclear energy, and satellites signaled to many that there were no limits—not even earth’s atmosphere—to technological progress. And if our planet were on the verge of conquering space, it would hardly be a stretch to imagine that more advanced civilizations elsewhere were capable of even greater feats.

But all this raised a question. Why were the extraterrestrials visiting us now?

Keyhoe believed that aliens had been keeping us under observation for a long time. Witnessing the recent explosions of atomic weapons, they had decided the inhabitants of planet Earth had finally reached an advanced enough stage to be scrutinized more closely. Still, there was no reason for alarm. “We have survived the stunning impact of the Atomic Age,” Keyhoe concluded. “We should be able to take the Interplanetary Age, when it comes, without hysteria.”

The flying saucer era had begun. Not everyone would remain as sanguine as Keyhoe. As concerns over global nuclear annihilation and environmental catastrophe grew during the ’60s, ’70s, and ’80s, claims about UFOs took on ever more ominous tones.

Times changed. And so, again, did the UFO phenomenon.