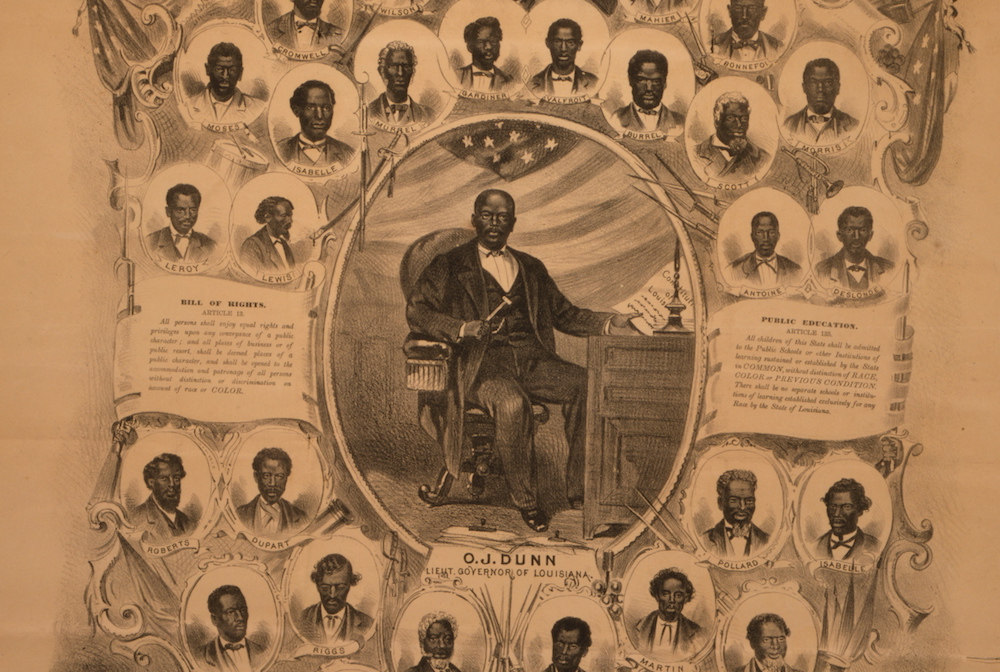 Illustration depicting Oscar Dunn of Louisiana, the first African American elected lieutenant governor of any state, and other legislators. After the Civil War, racist Southern whites used violence and intimidation to push back against Reconstruction policies that expanded political rights for African Americans. Image courtesy of Wikimedia Commons.

On a chilly Louisiana afternoon in October 1868, Louis Wilson left the courthouse, where he’d testified in an ongoing case. Wilson was a freedman living in St. Bernard Parish, a rural community outside the city of New Orleans. The Civil War had been over for three years, and the 14th Amendment, which gave Wilson full citizenship, had passed just three months before. Across the South, tensions were high because of the upcoming presidential election that would decide the fate of Reconstruction.

Wilson rode home alongside the winding Mississippi River, where he was confronted by a group of armed white men on horseback. He was aware that freed people had been killed the day before, but wrongly assumed that the carnage had ended. The men ordered him to dismount, and one of them struck his jaw with the butt of a shotgun. Wilson was thrown into a wagon with other captive freedmen and transported to a makeshift prison.

Later that evening, Wilson and a few others were dragged out of their cells, lined up, and blasted with shotguns. Everyone was killed except Wilson, who somehow crawled into a nearby cane field and waited for three days until he felt safe. Over the next few days, white men tore through the parish, attempting to eliminate any further threats, leaving behind them a trail of black corpses. Estimates of the massacre range from 35 to more than 100 murdered.

Historically, this event has usually been labeled “the St. Bernard riots.” It should be termed the 1868 St. Bernard Parish Massacre—one of the most brutal episodes of racist violence in U.S. history, as well as one of the most forgotten. I first came across it while working as a Louisiana history teacher in St. Bernard Parish, looking for events that my students would be able to relate to their own lives.

What I discovered was that a murderous rampage had occurred in my hometown, and almost no one knew. The perpetrators never discussed their atrocities. Local records were lost due to numerous floods, including Hurricane Katrina in 2005. I researched these events for years, driving to and from work, down roads and past former cane fields that were once the bloody battleground of Reconstruction.

Not only did I live in the very parish where the massacre took place, but the surnames of the assailants and the victims matched those of some of my students, both black and white, who worked together, played sports together, and shared lunches. As I delved deeper into U.S. Congressional archives, I uncovered investigations commissioned by the Freedmen’s Bureau and the Louisiana State Legislature, and correspondence with then-President Andrew Johnson. But my most startling discovery was that several of my students were the descendants of those involved, victims and perpetrators alike.

The racial tension that sparked the massacre was not unique to St. Bernard Parish. By 1868, the South had lost the Civil War and was struggling to rebuild its battered economy, which had depended heavily on an enslaved population. Louisiana was under federal military occupation during Reconstruction, and black males had obtained the right to vote.

The stakes were high for Southern elites in the presidential election, the first since the end of the war. If they could solidify a win for Horatio Seymour, a “Copperhead” Democrat who had promised to roll back Reconstruction policies, they might regain some of the power they had lost. Seymour railed against “Negro supremacy” and proudly painted himself as the “White Man’s” candidate. Whites believed that a victory by Seymour’s Republican opponent, Ulysses S. Grant, former commander of the Union Army, would pave the way for racial equality, leading to the collapse of economic and political systems that favored whites in the South.

After the Civil War ended, many impoverished whites faced increased economic hardship. Wealthier whites exploited their fears and blamed freed blacks as the cause of their ills. Newspapers owned by these elites were full of anti-Republican and racialized propaganda. Many poor whites perceived Reconstruction as a form of government occupation that disadvantaged them while favoring freed people. Conditions were ripe for dangerous rhetoric to turn lethal.

[…] my most startling discovery was that several of my students were the descendants of those involved, victims and perpetrators alike.

Violence in St. Bernard Parish started a pre-election pro-Seymour rally on Sunday, October 25, 1868. As white marchers passed by Eugene Lock, a freedman, they yelled for him to “hurrah” for Seymour. Lock refused. Someone grabbed Lock to intimidate him into submission, but as Lock remained steadfast, the crowd grew increasingly agitated. One white man tried to stab Lock with a knife, while another shot at him, narrowly missing his target. Lock drew his own pistol and fired back, hitting the shoulder of the man who had fired at him. Outnumbered, Lock tried to escape, but was shot in the head and mortally wounded before finally being stabbed. As news of the altercation sped through the small community, men grabbed their arms and prepared for battle.

Yet there was no battle, only a one-sided rampage by marauding whites. Throughout the week, armed white militias hunted freed people like Louis Wilson, as if for sport. In his testimony to an agent of the Freedmen’s Bureau shortly after the tragedy, Wilson said of the parish that he once called home: “This is such a cold place, I am afraid I will die here.”

According to an 1868 report by the Freedmen’s Bureau and an 1869 report by the Louisiana General Assembly, white mobs broke into homes and shot residents at close range, conducted executions in the streets, and killed those who tried to intervene. They plundered former slave quarters and stole items they found useful, most notably registration papers. A black pregnant woman was hacked to death by men with bowie-knives next to the courthouse. A white police officer was murdered by mobs for trying to keep the peace. It was 19th-century terrorism.

And it succeeded. While countless numbers of freed people fell victim to the violence, one white man, Pablo San Feliu, was killed by freed blacks in retaliation. Any legitimate supervisor of the presidential election was jailed, executed, or fled. Grant received only one vote in St. Bernard Parish as Seymour swept the state. According to historian John C. Rodrigue, “Republicans captured the presidency in 1868, but white terror carried the day in Louisiana.”

Despite the federal investigation, no one was arrested for the killing of the freed people. Black survivors identified white neighbors as their assailants, but no justice was sought. Instead, more than 100 freed people were arrested by local authorities and vigilantes for the killing of Pablo San Feliu. Over time, the massacre faded into obscurity. To this day, its only physical reminder is the tombstone of Pablo San Feliu, located in St. Bernard Cemetery, which reads:

The inaccuracies on San Feliu’s tombstone misrepresent the circumstances surrounding his death. The incorrect date suggests that it was erected a significant amount of time after the massacre, perhaps memorializing his death as if he were a martyr. The engraver referred to the freed people as “slaves.” Most importantly, by placing blame on carpetbaggers, the derogatory term applied to Northerners and other outsiders who had migrated to the South during Reconstruction, the inscription implies that San Feliu was an innocent murder victim. 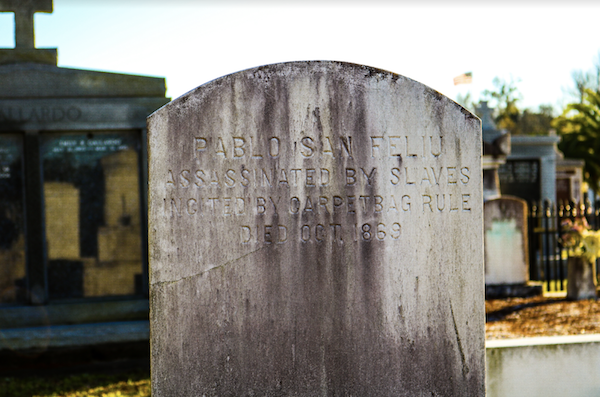 Nearly a decade after the massacre, Reconstruction officially ended. By 1877 Louisiana had returned to “home rule,” which meant that the black population was no longer protected by federal occupation. The new state government focused on suppression of black voters. The new state constitution allowed for arbitrary literacy tests and issued poll taxes, while also granting grandfather clauses that allowed white people to circumvent these obstacles to voting. By 1898, the black voting bloc had declined from 164,000 to a mere 1,342. By 1910, that number dropped to 730, less than a half-percent of eligible black men. Their political voice was silenced throughout Louisiana.

A massacre of this magnitude deserves a place in history. In researching a book on the incident, I sought the assistance of locals who were aware of the ordeal, some from oral histories. Subsequently, I incorporated the story of the St. Bernard Parish Massacre into my teaching curriculum, so that students could be made aware of their community’s history and its relevance today. Other teachers also have the book in their classroom and discuss it with their students, examining how dangerous rhetoric can lead to deadly actions and the dire consequences of racist scapegoating.

My students are often shocked when they learn about this chapter of their community’s history. But it provides opportunities to have open dialogue with one another about their roots, and to bring these conversations into their own homes.

I have been criticized by some in the community for unearthing buried history. Some have claimed that the timing was inappropriate, that it would worsen existing racial tensions. However, the overwhelming majority of people in the community have been supportive and eager to know more.

The progress that has brought my students closer together in the classroom can only be honored through a deeper understanding of history. These relationships epitomize how far race relations in Louisiana have advanced due to people pushing against barriers, from that lone man who voted for Grant in St. Bernard Parish to those who waged the nation’s first major bus boycott in Baton Rouge nearly a century later.

However, the reversal of many gains made by black Louisianans after Reconstruction reminds us that these advances are not inherently linear or permanent. The continuing problems of mass incarceration, police brutality, and educational inequity underscore the effects of the disenfranchisement of huge swaths of the black population.

Understanding complex historical events like the St. Bernard Parish Massacre shows how we can continue to bridge racial divides today. Communities should not hide from such history, but embrace it.