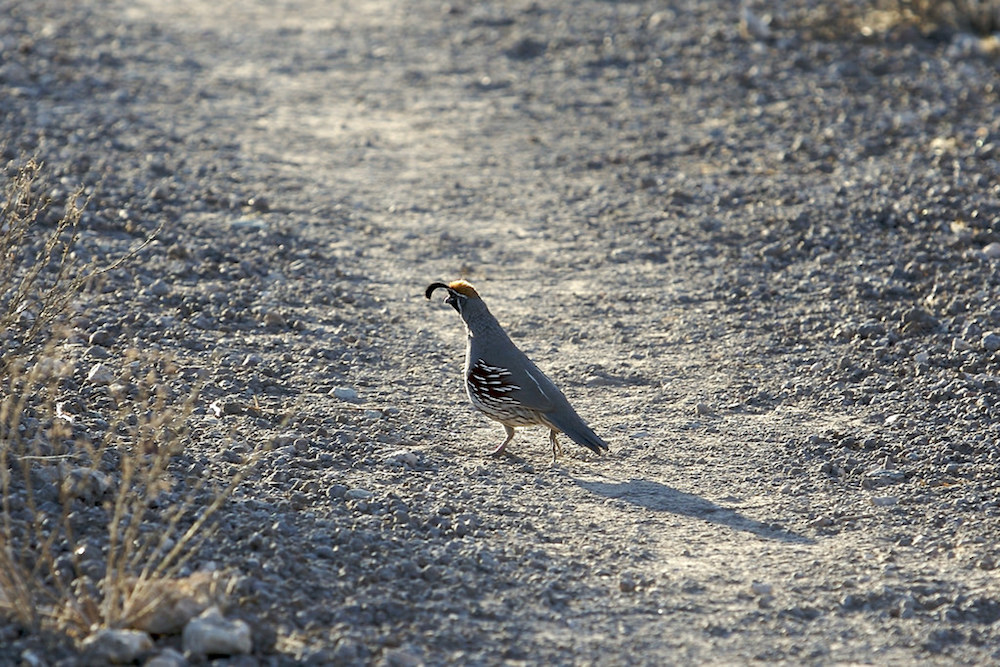 Zócalo Public Square’s daily ideas journalism and free public events aim to connect people and ideas, exploring our shared human condition and the world we’ve made. In that spirit, we publish a new poem each Friday. And for the last seven years, we’ve awarded a prize to the poem that best evokes a connection to place.

This year, 441 poets submitted a record total of 1,145 poems, transporting us to physical locations near and fear, as well as to imagined worlds and mental states found on no atlas.

Ultimately, Zócalo poetry editor Colette LaBouff and the editorial staff chose to honor a poem that evokes the complex relationship between the natural and human-made environs of Tucson, Arizona: cloud-brushed mountain peaks, a coyote’s plaintive wail, and a baby quail “nested beneath the aluminum carport.”

We’re thrilled to award the $500 Zócalo Public Square Poetry Prize to Charles Jensen, a Wisconsin native who once lived in Tucson and now makes his home in Los Angeles. He will deliver a public reading of his poem at Zócalo’s annual Book Prize award ceremony on May 22 at the National Center for the Preservation of Democracy in Los Angeles. Please see more details on the public reading here.

Jensen is program director of the UCLA Extension Writers’ Program and the author of six chapbooks of poems including Breakup/Breakdown and Story Problems. A new collection, Nanopedia, will be published by Tinderbox Editions in summer 2018.

His Zócalo Poetry Prize-winning poem is below, followed by a brief interview.

Dark clouds pull themselves,
hands first, over the peaks.

A snake leaves a warning
in furious cursive on the trail.

The drooping arms of acacia
have lost something precious
and cannot be consoled.

Further out, a coyote
chokes up a wail so thin it scratches
against windows like a fingernail.

The baby quail nested
beneath the aluminum carport,

they can’t see through. They wait
and wait for rain but it never
falls. They never see the sun

but they must know it exists—
surely they trust one or two
unseeable things about the world.

We spoke with Jensen about his Midwestern rural upbringing, what turned him on to poetry, and his prize-winning poem, “Tucson.”

I grew up in a rural area between Madison and Milwaukee, in a town called Eagle that had 1,000 people. It was 10 miles between my town and the next town and it was also surrounded by a state forest. I guess that there was a lot of nature around me, but I never knew that that was a thing, because it was normal. And I always loved going to the city because it was so exotic and interesting and exciting.

It’s interesting what you say about nature not seeming unusual to you. Your poem deals with our relationship to nature—how as humans we sort of write our way into nature through language, through metaphor. But nature also is able to express itself through its own kind of poetry.

What I discovered in writing the poem—and I don’t know that I had this in mind when I started—is that the poem starts out with images of desert life. But those images are personified: the clouds have hands, and the snake is writing cursive, and then the tree has arms, and it’s feeling a sense of loss. But then the quail—there’s a spiritual connotation for them because they can’t see the sky. And so I think the poem is asking, ‘Do animals care about heaven? And should they? Does not knowing about heaven make their existence any less meaningful?’ I think that’s where the poem is going.

The quail have adapted to this man-made, unnatural world, and you write that, “they trust one or two/unseeable things about the world,” spiritual things.

Right. It’s the only point in the poem where humanity has inserted itself into the natural world, and like you say the animals have adapted to it. And that element of humanity is actually invisible to them as being unnatural. For them, that is the natural world: to have that aluminum carport be their shelter, but it’s also a thing that limits them.

What’s your connection to Tucson?

Well, I lived in Phoenix for quite a few years and then I went to D.C., and after a few years there I moved to Tucson for about nine months—actually—before I moved to L.A. I lived in a remote part of the Tucson area called Catalina Foothills, at the base of the mountains. I love this landscape; I loved it since I was in Phoenix. But in Tucson it’s different. I had a friend who once told me that the difference between the two cities is that in Phoenix they pave the desert away—which I think is true—and in Tucson they welcome it right up to the front door, which is also very true. It was the first time that I felt that I really experienced the desert as like a neighbor. I once watched a Gila monster cross the road.

How do you think your own migrations have influenced your sense of place?

Because my migrations have been so extreme—moving from the snowy Midwest to the scorching desert, for instance, and then from one coast to the other—I think the unfamiliarity of the landscape and climate become overwhelming. Though I love the desert now, when I first moved there it felt so stark. But the desert is alive with critters and plant life despite its extreme conditions. I remember when I moved to D.C. from Phoenix, it was July and it was 70 degrees with 100 percent humidity when I arrived. My body couldn't deal—I was sweating and shivering. So place then is not only experienced geographically—it's a physical and emotional experience as well.

When and how did you start writing poetry?

I started writing poetry when I was 13. That year of my life I lived on Washington Island in Wisconsin, which is even smaller and more remote than where I grew up for the rest of my childhood. It’s off the ‘thumb’ of Wisconsin and it’s only 30 square miles. So I went there for a year, with 11 kids in my class; the whole school had 100 kids, K through 12. They had two artists come in and do residencies—one was a visual artist and the other one was a poet. So I had this amazing opportunity to have someone just be like, ‘Just try writing poems—because why not?’ And he was very encouraging. And what was weird—and I don’t know if I can even tell you why—I just never stopped.

Were there particular poets or writers who inspired you?

The poet that I read most deeply, and where I first saw myself as a poet, was Frank O’Hara. And his poem “The Day Lady Died” was the first one I ever read by him. And of course that’s a poem that’s entirely about the urban experience, and everything is overwhelming, and all these things are happening, and I’m living my very fast-paced life, and then this moment happens and it causes me to stop. So in a way it’s really weird that that was where I sort of located myself as a poet.