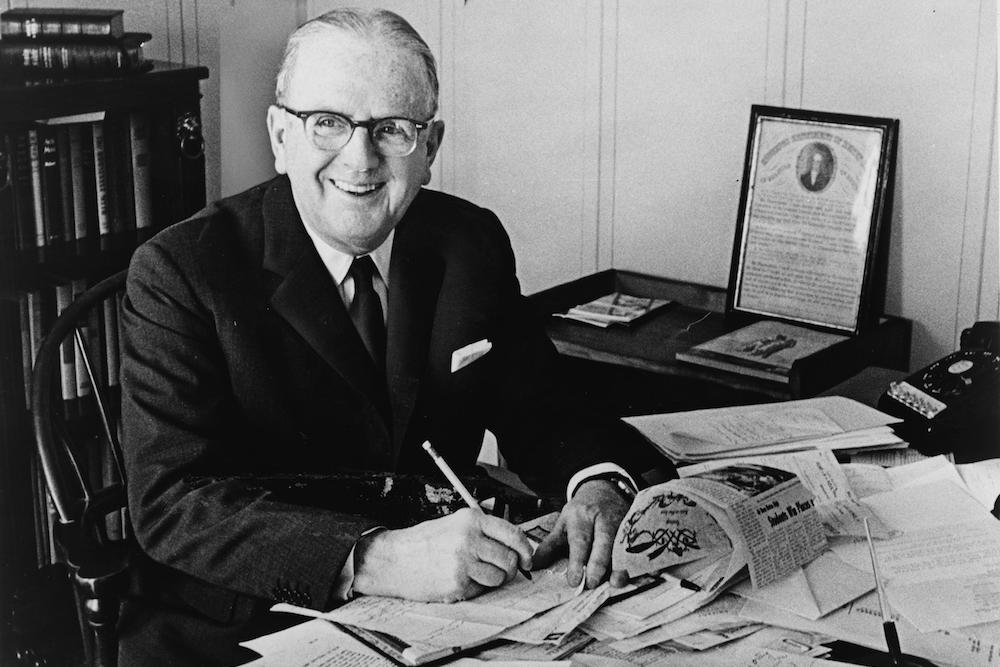 Are we feeling happy yet? Norman Vincent Peale, whose 1952 self-help book, The Power of Positive Thinking, remains highly influential, despite criticism from mental health experts. Photo courtesy of Wikimedia Commons.

All around us are reminders of how important happiness is in people’s lives: in TED talks, in the practice of meditation, in the annual World Happiness Report, and in advice on how to embrace positivity. Though the concept has been addressed at least since Aristotle explored the meaning of Eudaimonia (commonly translated as human happiness or welfare), the study of the nature of happiness—known as Positive Psychology—did not emerge as an academic field until the 1990s.

Positive psychology involves a complex mixture of Eastern religions, neuroscience, evolutionary biology, behavioral economics, international comparisons, and implications for public policy. But above all, it represents a shift among psychologists from mental illness to mental health; from anxiety and depression to subjective well-being.

Ironically, positive psychology was born in misery and war—long before the current version, with its emphasis on scientific study of positive human functioning and resilience, emerged with self-consciousness and institutional heft in the 1990s.

Among its most influential findings was the notion that people benefitted from severely stressful experiences. More than anyone else, psychiatrist and concentration camp survivor Viktor Frankl provided the evidence for and the philosophy of what was first known as posttraumatic growth.

Starting in September 1942, Frankl spent two and a half years in Nazi concentration camps. Soon after his liberation, he began work on a book, published in German in 1946, with a title that translated as “Saying Yes to Life in Spite of Everything.” In 1959, it was published in the United States and eventually titled Man’s Search for Meaning. Having returned to Vienna after the war, Frankl responded to the horrible events he had experienced by asserting that the most horrendous circumstances provided the seedbed of well-being.

If Frankl experienced loss under extreme conditions, John Bowlby did so through the lens of a privileged man who faced a series of less dramatic disruptions than Frankl. As a child, Bowlby rarely saw his parents, which spurred him to a lifetime focused on the importance of personal connections. In his 1951 report, Maternal Care and Mental Health, based on a study of millions of children left homeless as a result of World War II, he developed attachment theory. Extended and elaborated on by others, attachment theory underscored the significance of social connections more generally to human happiness.

The momentous traumas World War II veterans experienced also shaped the work of Aaron Beck, the author of an influential book on depression and a founder of cognitive behavioral therapy. In some of his first published papers, he reported on how soldiers reacted to accidentally killing their buddies. Beck developed ways of measuring and treating a host of mental illnesses that originated in such traumatic experiences. Central to cognitive behavioral therapy was teaching patients how to posit alternative explanations, develop realistic goals, learn to see reactions objectively, and practice “neutralizing ‘automatic thoughts.’” If not happiness, a word Beck did not deploy, then at least a less depressive and more realistic approach to the world resulted.

Another key figure is Abraham Maslow, whose optimistic, humanistic psychology emerged from personal and social adversity. The son of a miserably unhappy mother, as a youth he encountered anti-Semitism, and as a young professional came to know many of the émigré psychologists the Nazis had driven into exile. These experiences impelled Maslow to develop a holistic and positive theory of motivation, one that celebrated how individual humans might aspire to self-realization. He focused on healthy and fulfilled people, concentrating on a psychology of normality, not abnormality. Maslow’s vision found its most influential expression in his 1954 Motivation and Personality, where he offered a full statement of his philosophy of self-realization, one based on the notion of the hierarchy of needs, at the top of which stood peak, intense experiences.

If Frankl, Bowlby, and Maslow articulated one approach to happiness, neuroscientists offered another. A key discovery became publicly known in 1956 when James Olds published “Pleasure Centers in the Brain.” Writing in Scientific American, Olds announced that his findings, from experiments in which stimulating the brains of rats led them to pursue pleasure, contradicted the notion that brain stimulation meant punishment. He expressed hope that future studies might locate nerve cells whose stimulation by electrodes or drugs could satisfy other basic drives, such as the quest for hunger and sex.

In the 1950s, scientists discovered that not only electrical stimulation but also pills could make people happy. During the 1950s, some prescription drugs, known as “Happy Pills,” made it possible to produce if not bliss then at least lower levels of anxiety. Perhaps “the elixir of happiness has been found,” wrote an observer in a Canadian medical journal in 1958.

Miltown was the first in a series of moderately powerful tranquilizers that promised relief from social, medical, and psychological misery. The story of its development reveals how Frank Berger, a research scientist who fled Nazi-occupied Prague and was imprisoned as a homeless man in London, became a bacteriologist in a government laboratory. In 1950 he and an associate synthesized a compound commercially known as Miltown, which turned vicious monkeys into calm, friendly, and alert ones. After a slow start, it became the nation’s first blockbuster psychotropic drug.

Though many building blocks of positive psychology originated in misery, there is one important exception: Norman Vincent Peale’s enormously influential The Power of Positive Thinking.

A very different connection between science and happiness came in the first sustained social science studies of people’s sense of well-being—studies that originated out of concerns about mental illness but soon led to the exploration of well-being. The authors of Americans View Their Mental Health: A Nationwide Interview Survey (1960) reported on interviews in which Americans were asked how well or badly adjusted they considered themselves to be and whether they were “happy or unhappy, worried or unworried, optimistic or pessimistic” in their outlook. Focused on professional help and not self-help, the researchers aimed to determine how people felt about their lives and, if they had problems, whether and from whom they would seek help. Overall, they concluded, about 90 percent of Americans reported that they were very or pretty happy.

Five years later came a study that more clearly shifted the focus of social surveys from mental health to subjective well-being. In Reports on Happiness, social psychologist Norman M. Bradburn and sociologist David Caplovitz broke fresh ground by focusing on the mental well-being of what they called “normal” people and urged researchers to pay more attention to “positive satisfactions” and less to mental problems.

The counterculture of the 1960s and early 1970s bequeathed new kinds of studies on happiness, new experimentation with drugs, an interest in Eastern religions, the practice of meditation, a commitment to humanistic psychology, and a belief that experiences, especially intense ones, provided more pleasure than commercial goods. Before the 1960s, these elements had come together in the life and writings of Alan Watts, a central figure in Americans’ romance with turning to Asian religions for solutions and inspirations they felt their own world did not provide.

Watts’ commitment to Zen Buddhism and Taoism stood in unresolved tension with a life that was far from peaceful and harmonious. Seeking transcendence, he abused alcohol to achieve an altered state of consciousness. Though he espoused simplicity, he had to support a wife, ex-wives, and seven children. Achieving happiness, he wrote in 1961, involved reconnecting what modern life disconnected—not only man with nature but also “the individual” with “the unknown Self, the unconscious, inner universe.” In his immensely popular The Way of Zen (1957), he described meditation as “simply a quiet awareness, without comment, of whatever happens to be here and now. Initially skeptical of the use of drugs, by 1962 he hailed LSD as an entry point to a “Joyous Cosmology.”

Though many building blocks of positive psychology originated in misery, there is one important exception: Norman Vincent Peale’s enormously influential The Power of Positive Thinking. Published in 1952, it became the most widely-read precursor of positive psychology (though positive psychology’s practitioners would try to keep their distance from the book). Peale offered a reassuring message in which the exercise of a therapeutic, Protestant version of mind control promised peace, happiness, and well-being. His vision was highly individualistic, though at moments he offered examples of the benefit of helping others on a one-on-one basis.

In his 1998 address as president of the American Psychological Association, University of Pennsylvania professor Martin P. Seligman announced the launching of Positive Psychology, although by then most of the components of this scientific field were already in place. Positive psychologists would draw on what came before, often in ways their predecessors could not have anticipated and would not have approved of. Nonetheless, what emerged eventually was a powerful field, grounded in science and transformative in the lives of millions of people.