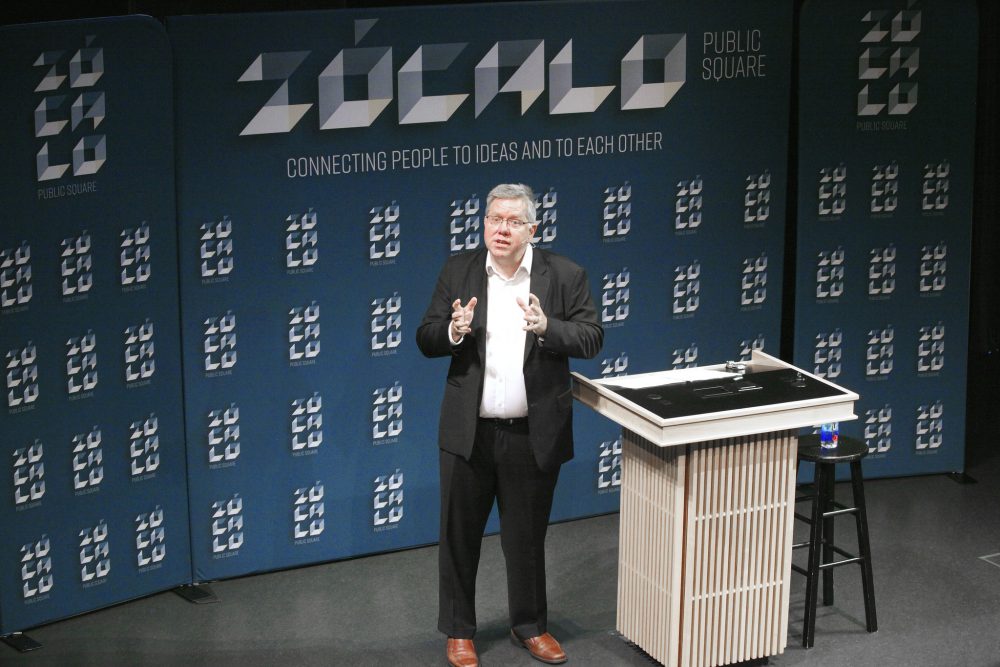 If you want to know where U.S.-Mexico relations are heading, Andrew Selee suggests, don’t just listen to the vitriol flying around Washington these days.

Instead, consider this week’s announcement that the 2026 soccer World Cup will be jointly hosted by the three nations that make up North America—Canada, Mexico, and the United States. Or take note of the three Mexican filmmakers who’ve won the Academy Award for Best Director in recent years. Or look at the increasing technology swaps going on between Silicon Valley and south-of-the-border cities like Guadalajara.

Selee, a scholar of U.S.-Mexico relations, made the case that the United States and its neighbor are drawing ever closer together in a Zócalo Public Square lecture at the National Center for the Preservation of Democracy in downtown Los Angeles.

He began by acknowledging that the question framing his talk—“Are the U.S. and Mexico Becoming One Country?”—was a deliberate provocation, to which “the answer is probably a resounding no.”

But “we are far more connected than we’ve ever been,” said Selee, who is president of the Migration Policy Institute, and author of a number of books including the just-published Vanishing Frontiers: The Forces Driving Mexico and the United States Together.

“We should believe more in the World Cup bid than what we see in politics,” he added. “I suspect the more powerful things that are happening are happening outside of government.”

As Exhibit A, Selee cited the small city of Hazelton, Pennsylvania, which in 2006 received national attention when its Republican mayor and council members passed an ordinance designed to discourage hiring, and renting to, undocumented immigrants. The law hit hard at the city’s Mexican and Dominican immigrants, putting Hazelton in the crosshairs of the national news media.

But Hazelton is a place that “wears immigration on its sleeve,” Selee said. In past generations, it had been home to successive waves of immigrants—from Ireland, Italy, Wales, Serbia, and elsewhere. But when those waves slowed, the city declined; buildings were boarded-up.

Yet if you visit today, you’ll see new restaurants and retail establishments sprouting, thanks in large part to recent immigrants, many from Latin America, who “are twice as likely as [U.S.-born] Americans to start businesses,” Selee said.

Indeed, immigrants from Mexico and Central America are creating wealth not only for their new U.S. hometowns, but also for the towns they left behind. Migrants from such Mexican states as Zacatecas, Puebla, and Jalisco have moved beyond only supplying labor to making capital investments and building factories. The giant Mexican breadmaker Bimbo has two factories in Hazelton. Cemex, the Mexican multinational building materials company, also has a large and growing U.S. presence. And Mexican magnate Carlos Slim is gradually expanding his telecommunications empire across the United States.

Another industry in which the United States and Mexico have grown together is auto manufacturing. Selee reminded his audience that in the 1980s many feared that the U.S. Big Three automakers might collapse due to fierce competition from Japanese and Korean imports.

Instead, the U.S. auto industry integrated with Mexico and Canada, learned to make smaller and better cars, and saved itself from destruction. Today, almost any “American-made” vehicle you see on the road “almost certainly was made by workers across North America,” Selee said. “Most vehicles have component parts from all three countries.”

While politicians and pundits tend to speak of NAFTA as if it were a one-way trade agreement between buyers and sellers, Selee said, the reality is more about industrial and economic integration across North America. That also holds true in professional sports and entertainment. The NFL now plays regular-season games at Mexico City’s cavernous Azteca Stadium. The Dodgers and Padres have squared off in the northern Mexican city of Monterrey.

“You don’t get more global, or universal, than Gravity or The Shape of Water, Selee said, referring to award-winning films from two of those directors. There’s also an emerging new generation of filmmakers in Mexico who aren’t necessarily gravitating to Hollywood, but are making high-quality films in their native country and earning international followings, he added.

Trumpian rhetoric about building beautiful walls, and policies aimed at locking up and deporting migrants, have badly strained relations between Mexico and the United States at the federal level, Selee acknowledged. But that hasn’t stopped cooperation from happening at the state and municipal levels.

One of the most striking examples is how San Diegans, fed up with their own cramped and inadequate airport, are taking a short trip to the border and crossing a convenient new bridge into the international airport in next-door Tijuana. Twenty years ago, Selee said, it would’ve been hard to imagine such then-dissimilar cities—one crime-ridden and dominated by low-skilled assembly work, the other a conservative, military-friendly place known for its sun-and-surf lifestyle—developing such a partnership.

Then both cities evolved. Tijuana now has one of the best food scenes anywhere, from taco stands to gourmet dining. It produces top-flight music, from electronica to classical and opera. San Diego, meanwhile, has matured into an innovation powerhouse in biomedical and other fields. “Somewhere along the way, San Diego and Tijuana began to notice each other,” Selee said, and the twin towns of different mothers are now busily investigating other forms of economic cooperation. San Diego’s mayor told Selee, “We don’t think about two cities, we think about one region.”

“Even on the federal side there’s a lot going on between the two countries that is surprising,” Selee said, mentioning security cooperation in fighting organized crime, and posting Mexican and U.S. inspectors side-by-side along the border.

During the question-and-answer period, some audience members raised concerns in response to Selee’s generally upbeat assessments. One asked what solutions Selee would propose for Mexico’s rising levels of violent crime, which he termed a “security crisis.”

Selee replied that he wished he had the answer. Still, he allowed, security forces are working together, despite a lack of strong leadership at times, and the surging problem of heroin and opioids. “The amount of cooperation that goes on is quite incredible, and the amount of trust that has been built,” he said.

In response to a question about NAFTA’s future, Selee asserted that “there is actually a lot of pressure going on” for the United States to stick with the agreement, and that, “The majority of Americans actually have a very positive engagement with Mexico” whether through jobs, friendships, or vacation and travel.

Another questioner pressed Selee about how immigration fits into the picture of improving relations between the two countries. Selee said he “worries a lot” that the tenor of relations has “changed at the top.”

Even so, he said, “We have very limited unauthorized immigration from Mexico but robust legal immigration.” In order to have a rational conversation about immigration, the United States must return to recognizing “that we are an immigrant country.”

And, when asked what advice he’d have for Mexico’s next president, who will be chosen in a few weeks, Selee said, “Don’t obsess about Donald Trump. Don’t think of this as a relationship about two presidents. Think of this as a broader relationship” that requires engaging with mayor and governors, businesses, and civil society.

“I do think that politics will make for a rocky relationship in the next few years,” Selee said. But “we’ll continue to work with Mexico because it’s in our interests to do so. And we’ll continue to grow closer.”

If in the past the two countries thought of themselves as distant neighbors, today the U.S. and Mexico are moving toward a deeper level of connection.

“Now,” Selee said, “I like to call them intimate strangers.” 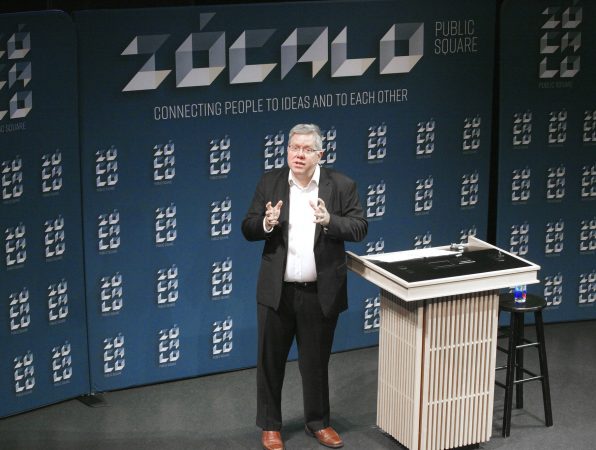 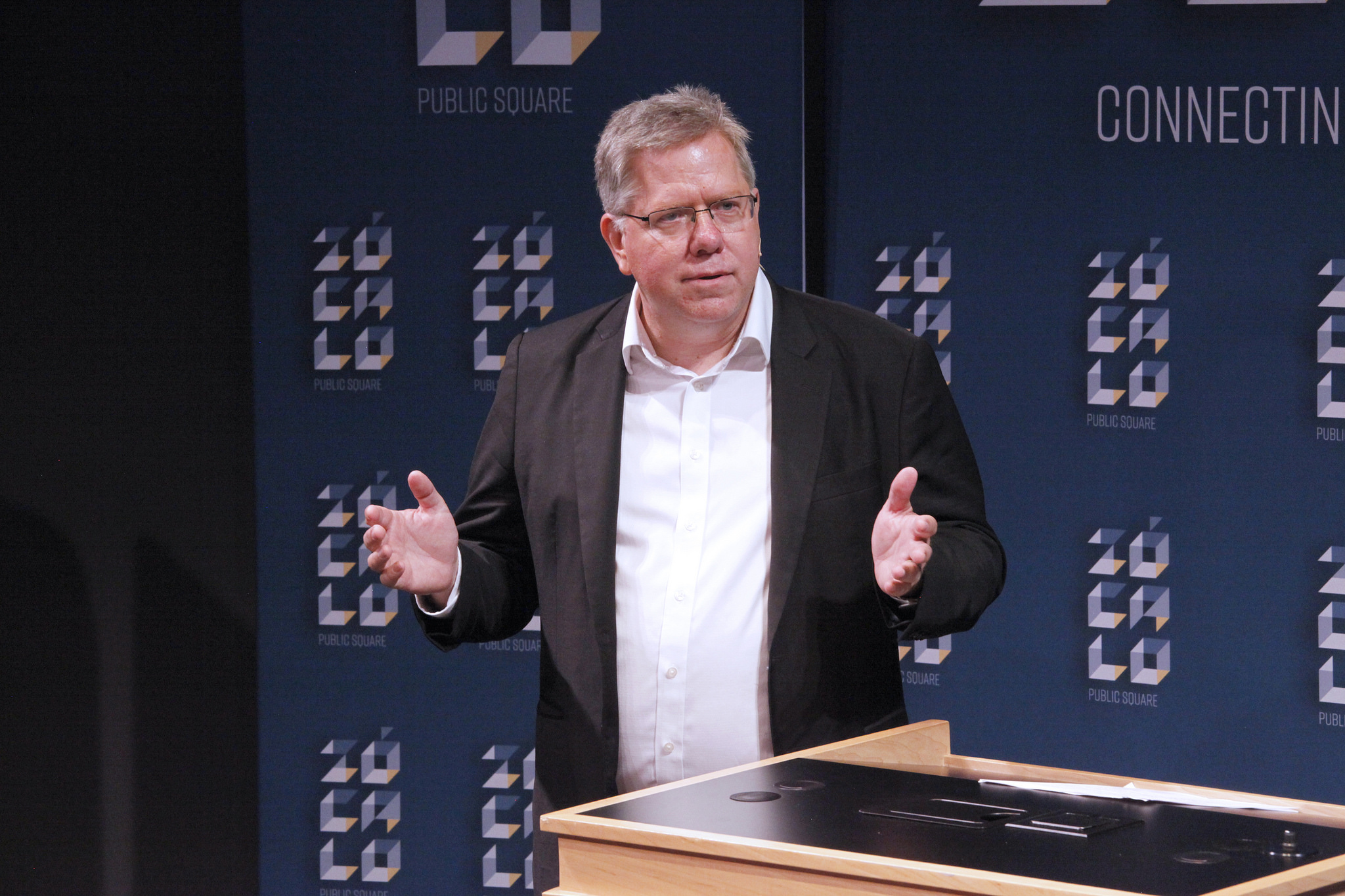 Andrew Selee, author of Vanishing Frontiers: The Forces Driving Mexico and the United States Together. 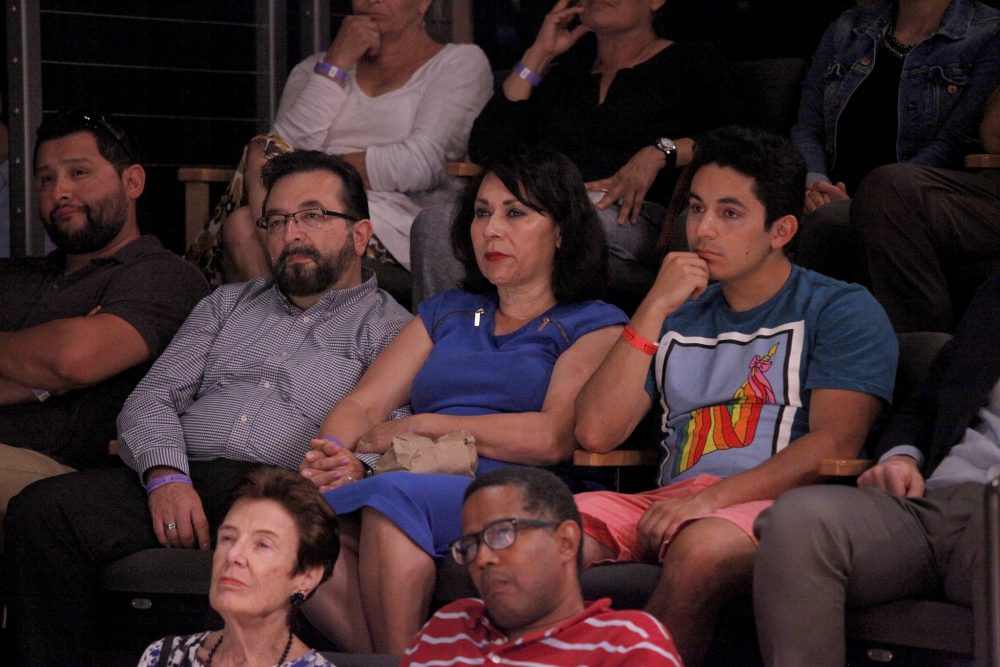 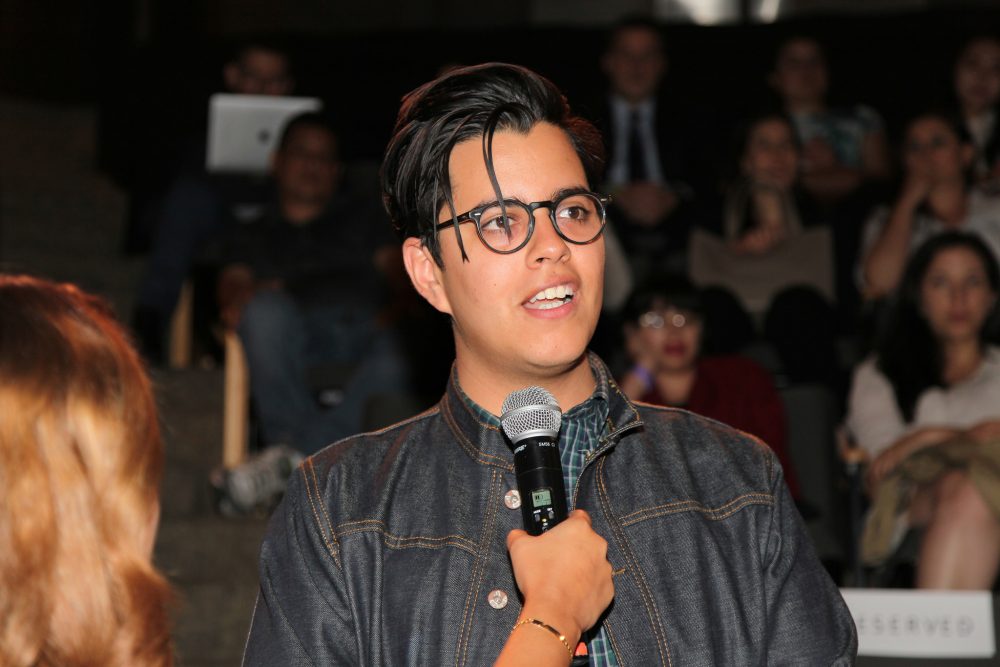 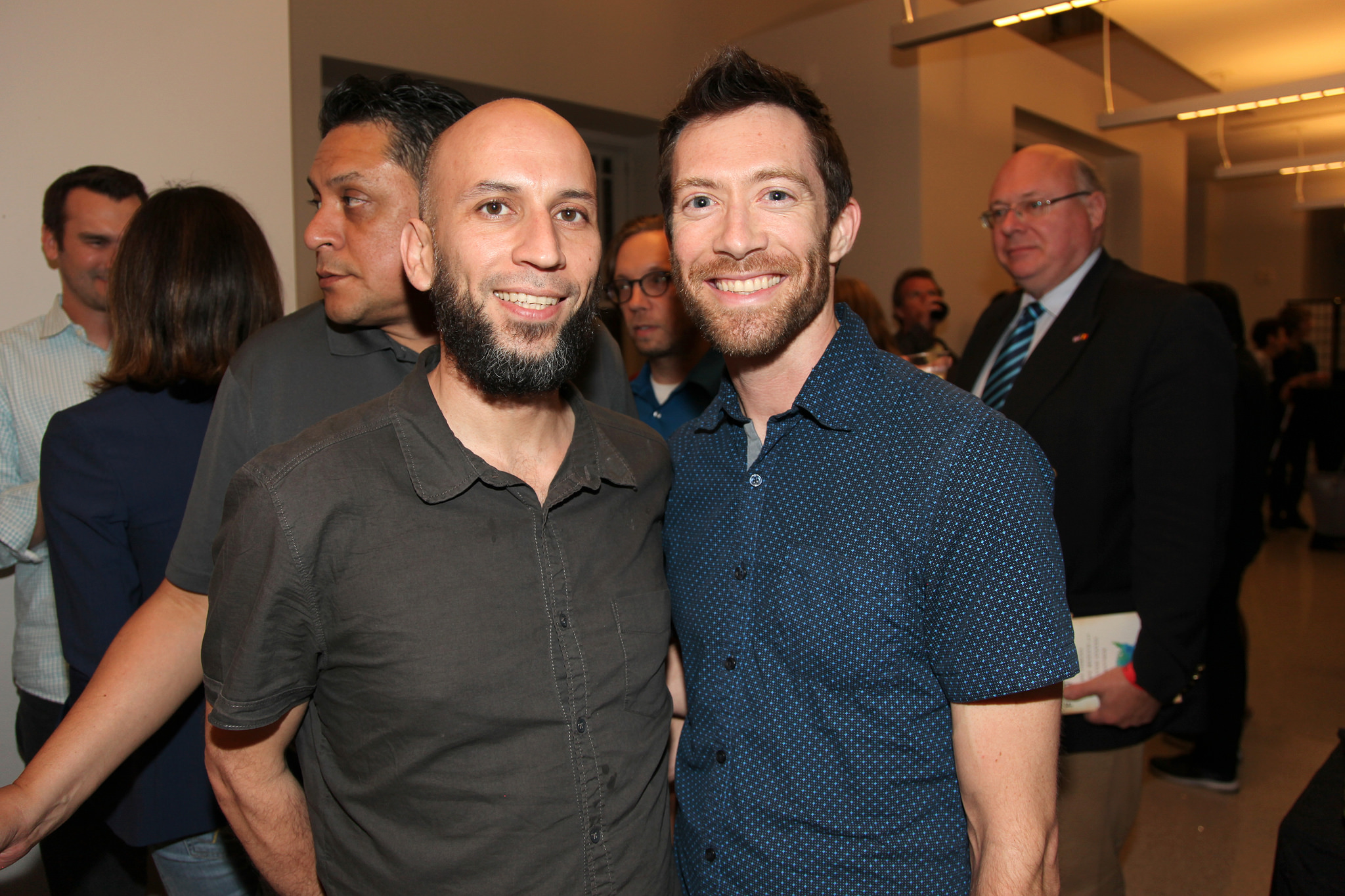 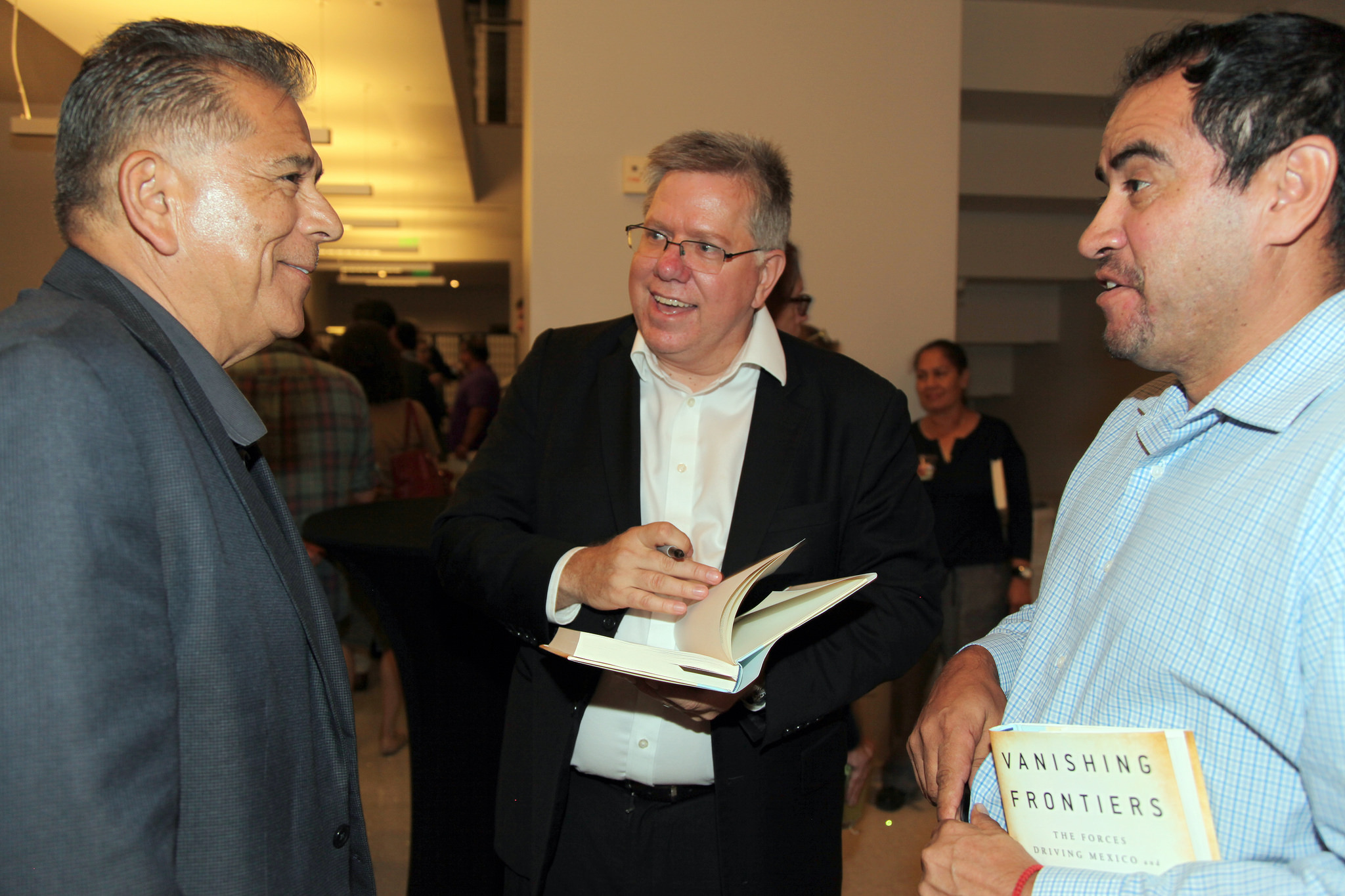 Andrew Selee speaks with guests at the reception.