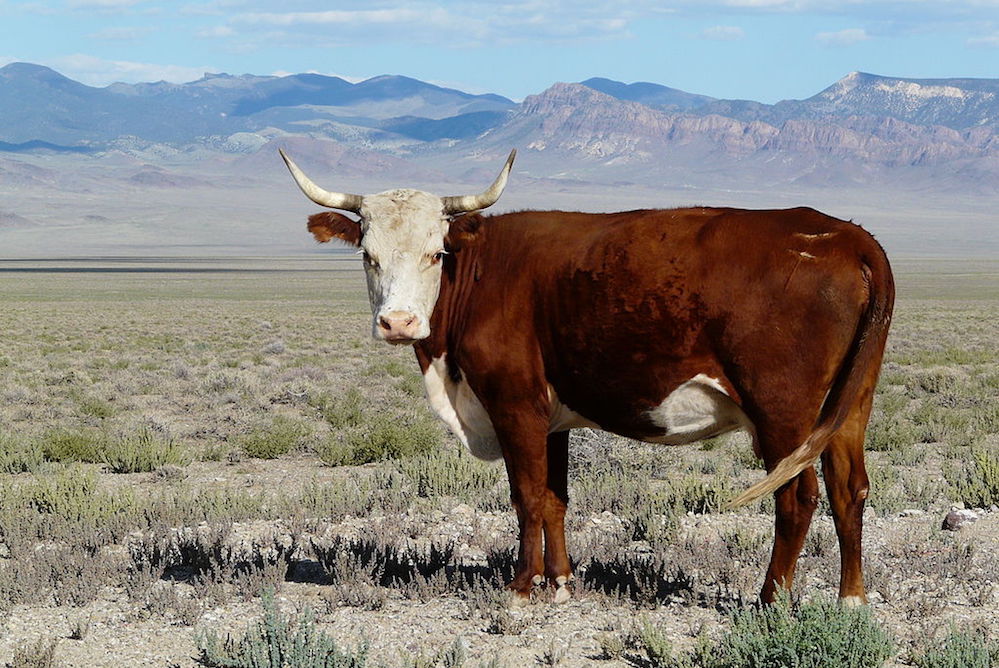 Americans have always been distinguished by their love of meat. Where does that love come from?

One short answer: our ethnic heritage. Among whites, the English and Germans were two of the greatest meat-eating cultures in Europe.

But that answer is about as satisfying as an overcooked steak. So there is a longer and tastier explanation: Americans’ relationship to meat production and consumption is long-standing, and built on core beliefs that meat is not only tasty but essential to good health and an indicator of economic well-being. Indeed, Americans and much of the rest of the world by the mid-20th century believed meat eating was a defining characteristic of civilization. Meat, and lots of it, has stayed a constant throughout our history—though our preferences for particular kinds of meat have changed as the country, people, technologies, and health concerns have shifted.

Today, the United States’ identity is tied up with beef. But the country started out devoted to pork and remained that way for more than half of its history. This originally made sense—pork was the most popular meat among Germans, the second most common ethnic background of white Americans for most of our history. But our pork preference also reflected livestock practices and regional tastes. In the North and South, pork was popular, especially among rural folk who allowed their pigs to forage. In fact, pigs foraged even in New York City until the municipal government banned the practice in 1849.

Pork’s enduring advantage was its price. Americans shared with many other meat-eating people around the globe a preference for cheap meats. But, unlike the Europeans who settled in the Caribbean and South America, North Americans did not eat salted or jerked beef. In 18th- and 19th-century America, urban and rural residents alike typically consumed wet-cured pork.

This preparation style required hogs to be cut into pieces that were placed in barrels filled with a brine solution of salt, saltpeter, and sugar or molasses. Barrel salt pork was ubiquitous in American cooking. For instance, it was an ingredient and flavoring in Boston baked beans and navy bean soup. Fried salt pork was a garnish in recipes for chops and stews. Strips of salt pork, called “lardoons,” were threaded into beef, veal, and poultry to add flavor. Likewise, bacon started the 19th century as a poor person’s food but over time became an item that all Americans ate.

Americans loved beef, too, but it was a luxury item since it spoiled quickly and refrigeration was not cheap. When they could afford fresh beef, they bought it, usually for special occasions. This was a nod to many Americans’ roots in 19th-century England, where eating roast beef on Sunday symbolized affluence and good health.

America would switch to beef as its meat of choice slowly and only once it became cheap. The Great Depression brought change. While meatpackers tried to convince Americans to eat expensive ham and dry-cured pork products, consumers began to devour newer and cheaper forms of meat, especially hot dogs and hamburgers. A descendant of much older European sausage traditions, hot dogs were usually made from finely processed pork or beef trimmings—i.e., byproducts like hearts, cheeks, tongues, lungs, kidneys—and generally encased in sheep intestines cleaned in packing plants’ offal departments.

World War II accelerated the transformation, boosting overall meat consumption in the process. The Army provided ground beef, and so American GIs ate much more of it than Americans back home. When millions of soldiers returned to the states, they wanted to continue to eat hamburgers. Growing affluence made higher-quality beef more affordable, and the rise of the fast food and restaurant sectors propelled meat sales. By 1990, 45 percent of all beef that Americans ate was hamburger.

This doesn’t sound healthy to modern ears. But for most of our history, Americans assumed that eating any meat was essential for good health. German chemist Justus von Liebig was particularly responsible for stressing animal protein’s significance for human health. Like many 19th-century physicians and scientists, Liebig believed beef juices and teas were nutritious and powerful restoratives for sick people. He supported the industrial production of beef extracts as a means to encourage meat sales among those who could not otherwise afford to eat it. Specifically, Liebig promoted a thick, syrupy, dark brown spreadable form of condensed beef, with his Extract of Meat Company, established in 1865 with production facilities in Fray Bentos, Uruguay.

Although beef extract was not popular in meat-rich America, Liebig’s work on animal protein influenced many American scientists. One of these was Wesleyan University chemistry professor Wilbur O. Atwater, who stressed the importance of cost-efficiency in human diets in his work, which included service as the first director of the U.S. Department of Agriculture’s Office of Experiment Stations from 1888 to 1891. He advised working people, who needed more energy than wealthier Americans, to eat meat, but in cheaper cuts, including salted and canned meats. The USDA published Atwater’s Food and Diet in 1895, and home economists and others taught his moral economy of meat and nutrition.

Growing affluence made higher-quality beef more affordable, and the rise of the fast food and restaurant sectors propelled meat sales. By 1990, 45 percent of all beef that Americans ate was hamburger.

But the science around meat and health changed—so the dominance of beef in America was relatively short-lived, only a half-century or so. The U.S. Senate’s Select Committee on Nutrition and Human Needs’ Dietary Goals for the United States, published in 1977, warned that diets rich in meats and other sources of saturated fats and cholesterol were associated with killer diseases like heart disease, cancer, diabetes, and obesity. After the livestock and meat industry protested the blunt language about meat’s dangers in the Dietary Goals’ first edition, the government issued a second edition in the same year moderating some of the language. But Americans took heed.

Americans—concerned about health and the dangers of meat-borne diseases, including those caused by bacteria, viruses, and parasites, but especially bovine spongiform encephalopathy (BSE) or “mad cow” disease—began eating less red meat, i.e., beef and pork. Our fat intake also declined over the rest of the 20th century. However, concerns about eating red meat did not translate into a great upsurge in vegetarianism or veganism. Most affluent nations’ citizens, including Americans, have increasingly turned to poultry, ostensibly because it is less fatty than beef or pork.

Although poultry production creates less greenhouse gas than cattle production, chickens and turkeys produce a great deal of dangerous waste materials, and chicken nuggets—one of the most popular types of poultry consumption—are quite high in saturated fat and calories. Americans may believe their poultry choices are healthier than red meat, but eating chicken and turkey may be more symbolic than real in achieving greater health.

All of this American meat-switching has had an outsized impact on the world, because our love of meat has been one of the country’s great cultural exports, especially to China, which is fast becoming a significant meat consumer.

But will Americans ever give up their meat eating entirely? Maybe Americans will rethink their meat habits again when the alarming health and environmental consequences of China’s desire for meat become more apparent. Or maybe Americans’ love of meat—of bacon, hamburgers, hot dogs, and chicken nuggets—will endure, a legacy of the meaty history of the land of the free, and the home of a people brave enough to eat meat, despite its risks and costs.