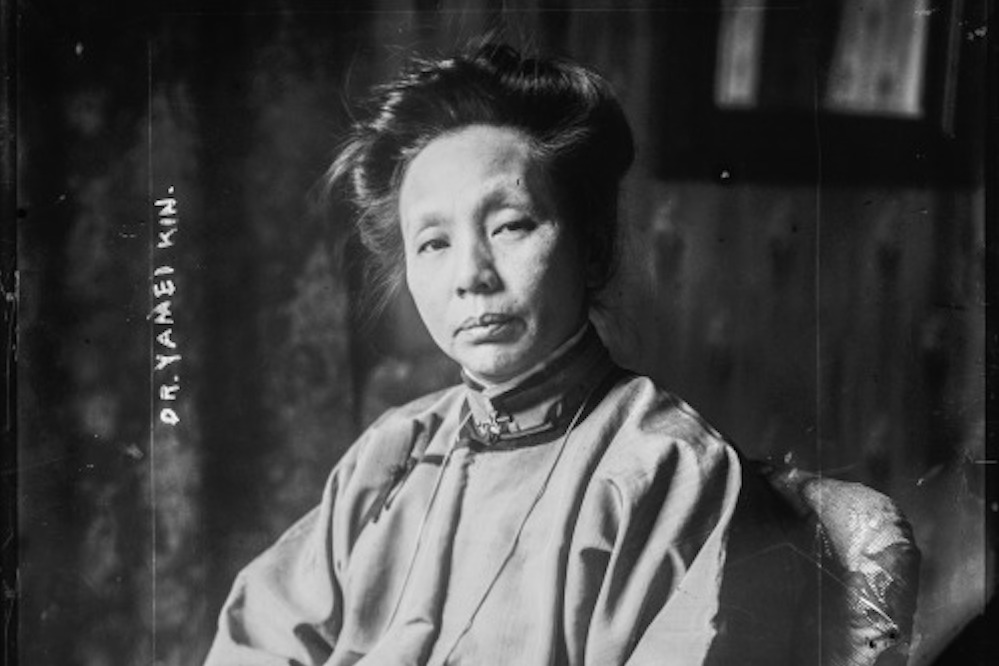 On a hot summer day in 1918, syndicated reporter Sarah McDougal paid a visit to an unusual laboratory of the U.S. Department of Agriculture Bureau of Chemistry, a predecessor to the Food and Drug Administration, in its Romanesque Revival building near the piers of New York City’s Hudson River. The bureau usually worried itself with detecting adulterants in imports, but its role had expanded during wartime to investigate “meritorious substitutes” for foods made scarce by the trade disruptions and hungry armies of World War I—in particular, red meat, wheat, and vegetable oils.

The particular lab McDougal was visiting focused on a promising meat alternative—tofu—and was overseen by a scientist named Dr. Yamei Kin, dressed that day in a blue kimono and white apron. “I have never seen a quieter, quicker or daintier person in a kitchen,” McDougal reported to her readers.

Kin was something of a celebrity. A year earlier, with much fanfare in the press, she had embarked on a tour of China to investigate the culinary uses of tofu, with a headline in the June 10, 1917 edition of The Sunday New York Times Magazine proclaiming, “Woman Off to China as Government Agent to Study Soy Bean: Dr. Kin Will Make Report for United States on the Most Useful Food of Her Native Land.” Now she was back to share her findings.

“Everybody in the place was ready to root for soy beans,” McDougal observed. Chemists from other labs dropped by to testify that, having taken Kin’s tofu home for their dinners, they could not tell it apart from the fish or pork chops it was prepared with. McDougal was particularly impressed by an array of soybean products displayed in a row of glass jars on a long table: a white cheese, a brownish paste, a brown sauce. “Talk about dual personalities!” she wrote. “The soy bean has so many aliases that if you shouldn’t like it in one form you would be pretty sure to like it in another.”

McDougal might just as well have been talking about Kin herself, a Chinese national sent as an agent of the U.S. government to China. This was, in fact, typical for Kin, who had shuttled between Asia and America her entire life, gaining in the process the mastery of two identities that she was able to switch between—or blend together—as circumstances demanded. From available sources, mostly news accounts such as McDougal’s, but also a growing number of archival sources unearthed on both sides of the Pacific, Kin’s motives remain somewhat obscure. At times, she was a voice insisting on the value and dignity of Asian lives, who in a small way helped counter the deep prejudice that prompted the Chinese Exclusion Act of 1882. At other times, she appears to have been a woman of great personal ambition who reinvented herself in the service of her own success—perhaps paradoxically the most purely American thing about her.

Kin was born in 1864 in the Chinese port city of Ningbo. Her parents, converts to Christianity, died in a cholera epidemic when she was two. She was taken into the family of D.B. McCartee, a white American medical missionary from Philadelphia. McCartee taught at the nascent University of Tokyo as a professor of natural science for a time, and Kin spent as much of her childhood in Japan as in China (as well as in the United States when the McCartees were on furlough). She dressed in embroidered breeches and wore her hair in braids, Chinese-style. She learned the Chinese classics. She also showed an aptitude for science, and McCartee prepared her to follow in his footsteps.

At age 16, after some preparatory courses, she enrolled as Y. May King in the Women’s Medical College in New York, founded by pioneering physician Elizabeth Blackwell. May King wore high-collared Victorian dresses, spoke five languages, and in 1885 graduated at the top of her class, becoming the first Chinese woman to earn a U.S. medical degree. A scientific prodigy, she mastered the microscopic photography of human tissue, publishing a well-received report on the subject in The New York Medical Journal.

She traveled to Amoy (now known as Xiamen), China in 1887 as a missionary for the Reformed Church of America, but only lasted a year in the field. It appears that she suffered a serious illness, or perhaps her ambition to duplicate Blackwell’s achievement by establishing a special hospital for women and children in China did not garner enough financial support from churchgoers. She joined her foster parents in Kobe, where she operated a clinic for five years.

In 1894, May King gave way to Yamei Kin Eça Da Silva when she married Hipolite Eça Da Silva, a Macao-born Portuguese musician—and, it seems, something of a cad. The couple moved to Hawaiʻi in 1896, where she gave birth to her son Alexander on what would soon be American soil. Motherhood notwithstanding, she applied for a medical license, submitting a letter from a Reverend F.W. Damon, who rejoiced that a “Chinese lady has proved that she is able so thoroughly to acquire the training of our Anglo-Saxon civilization.”

Mrs. Eça Da Silva traveled to California in 1897 to win support from congregations for missionary work to the women of China, whom she characterized—if news reports are to be trusted—as “sunk in stolidity and sensuality, the abject slaves of their lords and masters,” surrounded by “dense clouds of superstition and ignorance.” This seems to have represented the peak of her identity as a Christian missionary, perhaps shaken by the death of her adoptive father in 1900, simmering discontent with her marriage, and a turn toward Confucianism.

In 1902, having moved permanently to San Francisco with her family, she published a short story in the Overland Monthly as Dr. Yamei Kin, full stop. “The Pride of His House: A Story of Honolulu’s Chinatown” was a sympathetic portrayal of Ah Sing, a prosperous merchant and Confucian gentleman who gently and reluctantly proposed to his barren wife that they bring a handmaiden into their household to bear him an heir. Despite the wife’s eventual acquiescence, she is nowhere portrayed simply as an abject slave to her lord and master. The story’s publication was Kin’s first foray in a new role, as an emissary from the East explaining Asian culture to American audiences.

If she was a modern American woman in private, on stage she appeared in elaborate Chinese costume, with tastefully coordinated flowers in her hair. She spoke in a flawless English that delighted the press as marvelously incongruous.

Among other possible motivations for this new persona was Kin’s entrée into high society. She chaperoned three young San Francisco ladies on a six-month tour of Japan. In 1903, a women’s club in Los Angeles announced “a series of FOUR LECTURES OF THINGS ORIENTAL by the Noted Chinese Woman DR. YAMEI KIN.” Over the following two years—as she traveled to Chicago, Boston, New York City and Washington, D.C.—she became a sought-after speaker. In Washington, the Post reported, she “delivered a lecture at the residence of Senator Kean before an audience representative of all that is best in Washington society.”

During her travels, Kin told people she was a widow. Her husband was very much alive, however, and had sued her for divorce, charging her with desertion. According to the San Francisco Call, he claimed that she had told him he was not “up to date” and that she was a “new woman.” A judge granted him the divorce in Kin’s absence, who “when last heard of [was] in Boston.”

If she was a modern American woman in private, on stage she appeared in elaborate Chinese costume, with tastefully coordinated flowers in her hair. She spoke in a flawless English that delighted the press as marvelously incongruous. She reassured audiences that China was receptive to Western science and technology—and even to some social and political innovations—but insisted as well that Chinese culture, having mastered the art of gracious living, in turn offered a model to younger nations.

To clubwomen, she urged that the clothes of Asia were not simply more beautiful than American clothes, but also comfortable, loose, and simple—the ideal reform dress. To a Peace Congress in Boston and a pacifist audience in New York, she pointed to China as the only nation in the world to “live up to your doctrine.” (During the same trip, she had enrolled Alexander in a military boarding school.) To the Ethical Culture Society, she pointed out that, “all China is one vast ethical culture society.” And at a talk to socialists at the Cooper Union, she responded to the query, “Have you any Social Democratic party?” with, “No, we tried that in 200 B.C. It proved a failure and we adopted Confucianism.”

Kin eventually returned to China, where in 1907 she succeeded in emulating Elizabeth Blackwell by directing the Imperial Peiyang Women’s Medical School and Hospital in Tianjin. She held on to the position when the Manchu Dynasty was replaced by the Chinese Republic in 1910. Beginning in 1911, she began traveling regularly to the United States to escort Chinese nursing students for American training. She once again hit the lecture circuit to extol Chinese traditions and advocate for a China-friendly foreign policy. Meanwhile, her American son Alexander graduated college, worked in finance in New York City, and joined the army to fight in the war, only to be killed in battle six weeks before the Armistice.

On top of this loss, the terms of the peace gravely disappointed Kin, who feared the militarism of an emboldened Japan. The 1920 U.S. Census lists Kin as living on 11th Street with her foster mother, Joanna McCartee, who would die at the end of that year. With this bond to America severed, she would make her final return to China, living there until her own death in 1934 on a farm near Beijing.

To Kin, tofu was but one example of the Chinese art of living well on less, a gracious way to obtain meat directly from a plant. But while colorful enough to draw reporters like McDougal to her lab, her efforts proved a case of too little, too soon. Soybeans were not yet the widespread American crop they would one day become, and wartime scarcities soon ended. In addition, Kin herself described tofu as substituting best for chicken, fish, and organ meats, none of which were rationed during the war. While soy foods would briefly gain renewed attention during World War II, it would not be until a surging counterculture embraced tofu in the ‘60s and ‘70s that it would gain longstanding popularity in America.