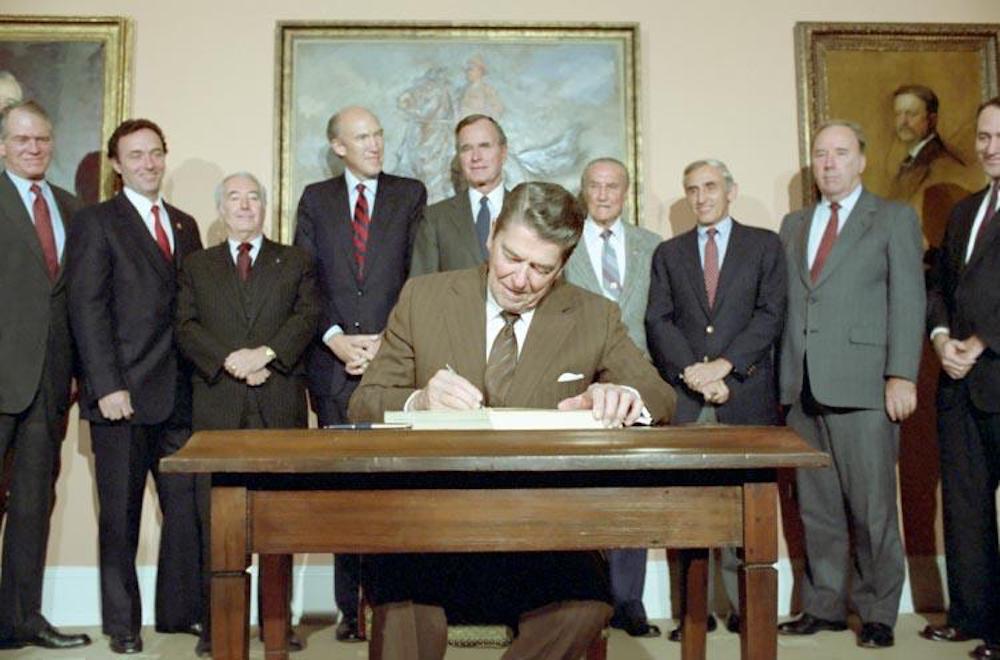 One afternoon in July 1985, President Ronald Reagan met with his domestic policy council in the White House cabinet room. The question: should he keep pushing legislation to offer amnesty to undocumented migrants?

Some Reagan aides wanted him to drop his support for amnesty, the term for granting legal status to people in the country illegally. Reagan’s pollsters had told him that the public opposed amnesty. And the president’s championing of amnesty had produced defeats. Reagan’s first bill to legalize immigrants failed in Congress in 1982. In 1984, Reagan had convinced the House and Senate to pass a bill, only to see the legislation fall apart in conference committee.

But amnesty had one stalwart supporter in the room: Reagan himself.

Recently, at Reagan’s presidential library in Simi Valley, I read through the records on the legislation that became the 1986 Immigration Reform and Control Act. Today, IRCA doesn’t get much respect; it’s long been dismissed across the political spectrum as “the failed amnesty law.” Its central idea, of broad forgiveness and quick legal status for undocumented immigrants, is completely out of political fashion today.

But while studying the records, I was struck by the difference between the reality of the 1986 amnesty and its 2018 reputation. The 1986 law was carefully conceived, realistic, and humane—reflecting the practical wisdom of a California president.

The records show that Reagan, despite his reputation for avoiding details, was personally engaged on immigration. When aides talked about the supposed peril to public safety of immigrants, Reagan shifted the conversation to specific stories of undocumented immigrants in California who suffered because of their lesser legal status. “The president cited past cases of exploitation of illegal aliens,” according to the minutes of that 1985 meeting.

Reagan ended the meeting by saying he wanted to talk more with the legislation’s co-sponsor, a Republican U.S. senator from Wyoming named Alan K. Simpson. In those conversations, Reagan and Simpson determined to go forward with the legislation, for two big reasons.

First, they saw legalization as essential to protecting and integrating immigrants. “The work to be done is to avoid seeing this nation populated with a furtive illegal subclass of human beings who are afraid to go to the cops, afraid to go to a hospital…or afraid to go to their employer,” Simpson wrote Reagan in a private note that began, “Dear Ron.”

Second, and more important, both men were old enough to have seen immigrants used as scapegoats; they urgently wanted legislation to preempt divisive politics. “If we do not choose to have immigration reform in the near future, the alternative will not just be the status quo,” said Simpson while reintroducing the legislation in 1986. “No, the alternative instead will be an increased public intolerance—a failure of compassion, if you will—toward all forms of immigration and types of entrants—legal and illegal; refugees, permanent resident aliens, family members and all others within our borders.”

The bill did pass, and it forestalled Simpson’s nightmare—but only for a while.

Immigration restrictionists blame the 1986 law for today’s bitter conflicts over immigration. But they have it backward. Today’s immigration problems result not from amnesty but from our collective failure to understand what made the 1986 law successful.

IRCA actually had two big pieces. One—the successful piece—was amnesty, which was limited, fatefully, to immigrants who had been continuously in the U.S. since January 1, 1982. But the bill’s other big piece drew more attention and was more influential in turning immigration into an American quagmire: a new enforcement regime that prohibited hiring and employing the undocumented.

Familiar figures from today’s politics show up in the records in ways rich with irony. President Trump’s National Security Advisor, John Bolton, Trump legal spokesman Rudolph Giuliani, and Supreme Court Chief Justice John Roberts—all then in Reagan’s employ—worked on amnesty’s behalf. The politics around this new enforcement were scrambled and did not break down along party lines. Many Democrats opposed the bill, with some arguing that hiring restrictions would lead to discrimination against all Latinos. Labor unions worried that the bill would be too lenient on employers, particularly in agriculture, while some Republicans opposed it because it might be too tough on businesses.

Compromises pulled the bill to passage. To reassure those worried about employment discrimination, an amendment prohibited, for the very first time, employment discrimination on the basis of national origin. And, crucially, California’s own U.S. Senator Pete Wilson—who as governor in the 1990s would embrace anti-immigrant politics—helped lead negotiations that led to the creation of a special legalization category for agricultural workers.

The 1986 law was carefully conceived, realistic, and humane—reflecting the practical wisdom of a California president.

IRCA should have been celebrated as a tremendous legislative victory. But the bill’s passage was overshadowed by news of the explosion of the Space Shuttle Challenger. Reagan didn’t sign the bill until after the November 1986 election, in a small ceremony subdued by the fact that Republicans had lost control of the U.S. Senate. Reporters in attendance asked about the Iran-Contra scandal, not immigration.

But in his remarks that day, Reagan unabashedly emphasized the benefits of the bill for the undocumented. “The legalization provisions in this Act will go far to improve the lives of a class of individuals who now must hide in the shadows, without access to many of the benefits of a free and open society,” he said. “Very soon many of these men and women will be able to step into the sunlight and ultimately, if they choose, they may become Americans.”

Under the two-step amnesty process, more than 3 million people applied for temporary residency, which lasted 18 months, in the first phase. In the second phase, 2.7 million people received permanent residency as a result of the law. This was the largest legalization in the country’s history, but it should have been larger. An estimated 2 million people did not legalize their status.

Why not? The law was not generous enough. It excluded newer immigrants who had come between 1982 and the law’s 1987 implementation. Some undocumented immigrants feared making themselves known, while others didn’t know about the program, because publicity and outreach came late in the window for legalization. Some were discouraged by the federal government’s bureaucratic and time-consuming legalization process of security checks, document checks, and requirements for competency in English and American civics.

In retrospect, the process should have covered all undocumented immigrants and should have established a regular amnesty process every few years, since the demand for immigrant labor was certain to keep attracting people to the country. But in many ways, amnesty was a government success story—it gave millions of people the legal status they required to have a better life. It even turned a $100 million profit for the government through the $185 fees it charged applicants.

But amnesty’s successes didn’t stop immigration restrictionists from criticizing the law and scapegoating immigrants, especially after the economy went south in the early 1990s. The main attack on the law continues to this day: Amnesty encouraged more undocumented immigrants to come, critics say. In fact, the opposite is true. Studies show that amnesty produced a small decline in the number of illegal entries into the country.

Restrictionists also have persistently claimed that only tougher border security and immigration enforcement will reduce illegal immigration. The 1986 law’s hiring enforcement provisions, and the ensuing three decades of additional border security and tough-on-immigration laws have not worked to reduce illegal immigration. Instead, the endless deluge of new laws and restrictions have made it nearly impossible for undocumented persons to legalize their status or establish themselves in the country, thus adding to the numbers of people who stay in the shadows. Even migrants who arrive legally and apply for legal status can be effectively turned into lawbreakers by the immigration system. This is pure Kafka: In the name of stopping illegal immigration, we make all immigrants illegal.

President Trump represents not a new approach but rather a nasty extension of our longstanding obsession with criminalizing immigrants; his innovations are to reclassify refugees and children as immigrant terrorists, who need their own concentration camps. This is stupidity in service of stupidity, and hatred for hatred’s sake. Today’s immigration reformers aren’t much smarter. Their proposals combine more failed border security policies with legalization plans so full of bureaucratic obstacles and delays—some proposals require a 20-year wait to achieve legal status—that they are worthless.

Sadly, both advocates and opponents of immigration now follow the same failed script of increased spending on border security, increased illegalness, and offering a narrow path to legitimacy.

It’s time to flip that script. Make amnesty, not border security, the starting point on immigration. The stance should be: not one penny for enforcement or walls until we have amnesty for all our undocumented neighbors.

Amnesty is wise policy for reasons that go beyond immigration. The United States is not just anxious and polarized now: It’s downright unforgiving. In our public sphere, we never forgive a single sin of those who trespass against us.

The Bible says this is wrong: “Forgive as the Lord forgave you,” it advises. Our lack of forgiveness is also a sign of national decline. “The weak can’t forgive,” Gandhi said. “Only the strong can.”