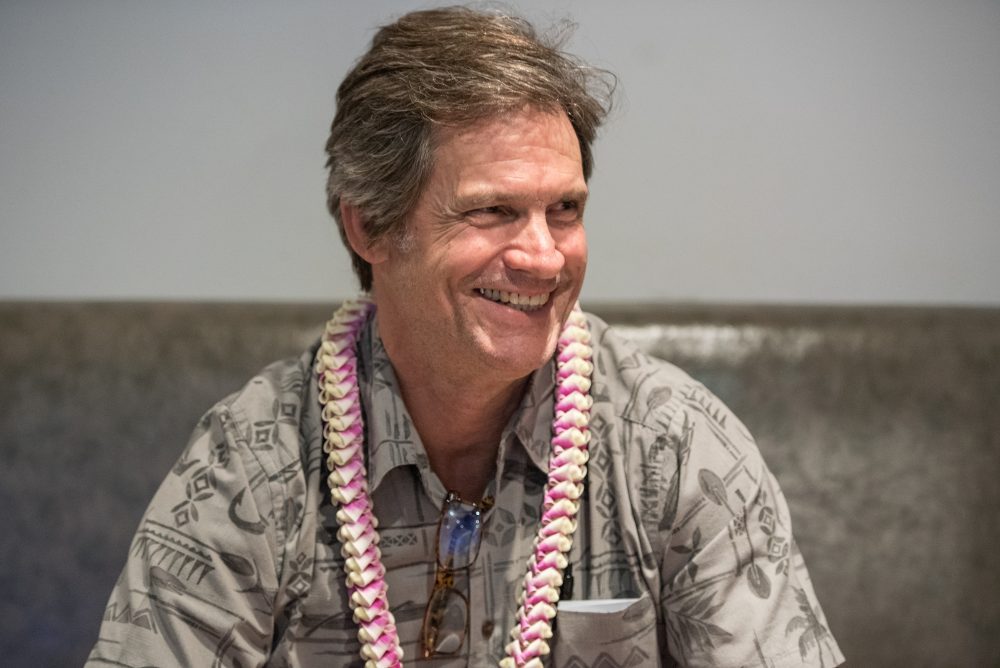 Chip Fletcher is a University of Hawai‘i at Mānoa geologist and an expert on climate change. Before taking part in a Zócalo/Daniel K. Inouye Institute “Pau Hana” event panel discussion at Artistry Honolulu titled “What Can Hawai‘i Teach the World About Climate Change?” he spoke in the green room about his multi-generational household, which questions people ask him about climate change, and having an epiphany in high school chemistry class.

Did you come from a family of nature lovers?

My dad worked for a bank, and yet weekends and vacations were always about going outside somehow, a national park or something like that.

How did you become interested in this line of work?

I actually was not a natural fit to the classroom. I think I’ve got a number of learning differences. So where I really was able to find a sense of self was outside, in nature. I realized pretty quickly, in high school, that what I really liked was rugged terrain that had a lot of relief, that had a lot of forest, and that had a lot of rock outcrops. And this mosaic of complex, natural, all-your-senses-were-involved, the wind-and-everything [type of experience], somehow connected me to the environment and to nature. I wanted to become a forestry major, which meant I had to go through majoring in biology, which had me dissecting fetal pigs in a laboratory, and it wasn’t the forest I wanted to be in. I took a geology class and could not believe they actually studied rocks. That was the weirdest thing in the world. That was another epiphany for me, was that the Earth is a subject itself. So I didn’t hesitate from that point on, and embedded myself in earth sciences.

What are some of your most beloved places to experience nature here in Hawai‘i?

I live near the edge of the ocean. I’m a coastal geologist, I study reefs and sand transports and sea level change, more specifically sea level rise related to global warming. But I love the mountains, I love under the ocean. Any natural setting appeals to me.

Was there a teacher or professor who really influenced you?

There was a teacher in high school who I totally didn’t get that teacher’s enthusiasm about the subject matter, and made an inappropriate joke, assuming that that teacher was joking about the subject matter. And I immediately realized, no, this person is actually that enthused about their discipline, which was chemistry. It was an epiphany for me that not everything had to be cool, not everything was about what my friends thought. And it was sort of a growing-up moment.

When people find out you study climate change, what’s the question they ask you the most?

I hear several questions. One is, “How do you handle this negative news?”

Yeah. So that’s been a journey I’ve taken. Then there are more technical questions, such as, “How are we going to adapt to three feet of sea level rise?” “When will it happen?”

You know, on a more emotional level and meaningful level, I work with the Republic of the Marshall Islands, I go to Majuro. And I’ve noticed over the last couple of years Marshallese coming up to me and saying, “Do we still have until 2050?” as if they had an expiration date stamped on their forehead. And as if literally 2049 was going to be OK but 2050 wasn’t. So there’s a lack of understanding the fundamental science here. And there was a lot of simply giving up. And so I’ve been working with the Marshallese government to start to recognize that they’re in danger as a 3,000-year-old culture, as a modern sovereign nation, and they have been putting most of their energy into convincing the world’s polluters to stop the carbon emissions so that they don’t drown under sea level.

And I’ve given a number of talks there where I’ve said, “Look, folks, if you just look at this from a carbon-budget point of view, we are not going to stop at 1.5 [degrees Centigrade of global temperature increase], we are not going to stop at 2, we are currently on a pathway to 3.5 degrees. You need to accompany your mitigation narrative to the world with an adaptation plan. And so now they’re working more on adaptation than they have before.

Some of my 21-year-old’s artwork from when he was five and six.

What do you do to unwind?

Well, I live in a multi-generational household. There are three generations: my two grandchildren, my wife and I with all three of our children, a son-in-law, the occasional resident girlfriend or boyfriend. Some days it amounts to 10 people.

So I love being at home. I love Saturday mornings, getting up before the sun and just listening to all these folks wake up and interact with each other. That’s one of the most relaxing things I have, and it empowers my work with climate change and trying to communicate to the community what lies ahead for us. I love going to lovely places, but I need to share that with somebody. I like to do it with someone that’s meaningful to me.

What’s a movie that has impacted you recently?

First Reformed, with Ethan Hawke [as a parish pastor at a small Dutch Reform church], which was a powerful movie for me to watch. There’s a scene where he goes to talk to a man who has succumbed to climate despair, and I’ve watched this scene a lot. And Ethan counsels him that there’s always been despair in the human heart, there’s always been blackness. The solution to despair is courage. And it helped me define some of the emotions I was feeling about climate change.