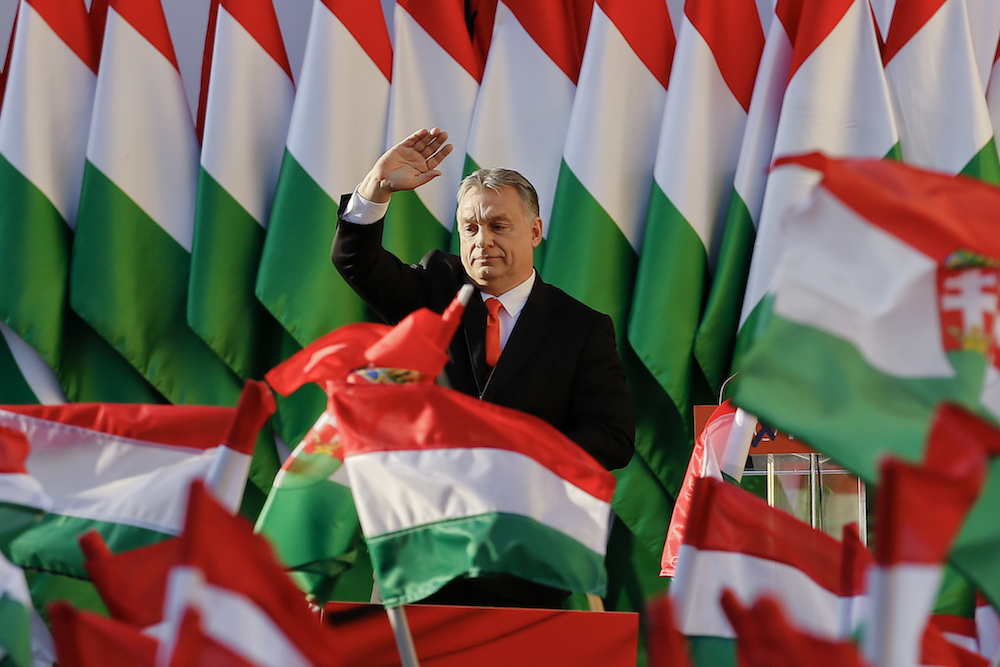 Hungarian Prime Minister Viktor Orbán at a campaign rally in April 2018, shortly before winning his fourth term since 1998.  Photo by Darko Vojinovic/Associated Press.

Nationalism as we know it today—a global movement of states led by strongmen decrying globalization—is a recent invention. But a brief and broad history of nationalism reveals its important paradoxes and possibly a new way of understanding the current version.

Before the 19th century, most peoples, in most parts of the world, did not live in nations, but in those larger conglomerations of peoples we call loosely “empires”—or as they were often known, “universal monarchies.” Most of today’s nations are the creatures of imperial collapse: Germany, Italy, Belgium, Greece, Romania, Bulgaria, Serbia, Norway, Albania, Finland, Ireland, Sweden—not to mention the former settler populations in North and South America and the former colonies in Africa and Asia—all were once part of larger imperial groupings.

Before they became independent, few of the inhabitants of these places had any real sense of themselves as belonging to nations. They took their identity, instead, from what was known in many European languages as “small homelands:” families, tribes, villages, parishes, ethnic and religious communities, etc. Italy, for instance, only came into existence in 1871 after a prolonged series of wars, mostly against its former Austrian rulers and their allies. All that had previously existed had been a collection of duchies, principalities, and city-states sharing a common religion, a more or less common language, and a more or less imaginary common history in imperial Rome.

So when these places became nations, they were compelled to invent for themselves a collective identity, a past, and a role for the future. They also had to lay claim to political legitimacy. This they did through the principle now known as “indivisible sovereignty.” If the nation was, henceforth, to be the only legitimate unit of human association, then the nation’s power to make decisions concerning the fate of its citizens had to be, in Thomas Hobbes’s words, “immortal…incommunicable and inseparable.”

A nation might be prepared to open its borders, share its resources with other nations, make and abide by international treaties, etc. But the decision to do these things had to rest with the nation alone. This is essentially what “self-determination” means; and “self-determination,” which Woodrow Wilson in 1918 called “the imperative principle for action” in the modern world order, has become the defining feature of the modern nation-state.

While this definition of nationalism seems inward-facing, in its earliest forms, it was also paradoxically cosmopolitan. These new nations—unlike the old empires—were liberal and democratic and did not look upon their demand for self-determination as a threat to, or threatening for, that of any other peoples. Giuseppe Mazzini—the theoretical architect of Italian nationalism and one of the most influential political writers (and activists) of the 19th century—forecast that the future would be made up of assemblies of nations, each sovereign and independent in its own right, but each living in harmony with all the others. The new “nationality” was, he insisted, no “bitter war on individualism,” nor was it intended “to foster a new sectarianism.” “Ours is not a national project,” he claimed, “but an international one.”

Not all, however, thought like this. In Germany, in particular, and under the influence of some followers of philosopher Georg Friedrich Hegel, an alternative vision emerged of the nation as the creation of a distinction between “friend and foe.” Nations, the neo-Hegelians insisted, were born out of conflict, and could only survive and prosper through conflict. Every nation, in order to become and to remain a nation, required an “other” against which to struggle.

To put it very crudely: If Mazzini’s nation was built upon some species of love, the neo-Hegelian one was built on hate. If the liberal, Mazzini nation aimed for international peace, the neo-Hegelian one could only flourish in war. And with this came most of the vices we currently associate with nationalism: xenophobia; bigotry; the contempt for other cultures, other religions, even other languages; and the belief that “we” are best and that “we” must always be first.

In Europe, the end of World War I, and the subsequent economic and political disorders, made versions of the neo-Hegelian brand of nationalism seem particularly attractive. As many—most notably Madeleine Albright—have pointed out, the similarities between the situation in the 1930s and the one we face today in many parts of the world can seem uncanny. The fault for every national malaise, from the economy to diminished political status, is laid on the international order—today we call it “globalization”—and on the remote indifferent “elites” who govern what the Italian Fascists sneeringly called “the individualistic liberal state.” The solution for every ill is believed to be to return power to the “people,” and not to the so-called “representatives” of the liberal state.

Inevitably, since the “people” are only ever a figment of the political imagination, restoring their power is believed to require a strongman who would not “represent” but—literally—“embody” them, just as he would also embody the nation: a Mussolini, or a Hitler; an Orbán, an Erdogan, or a Putin or a Trump. But strongmen, like the nation itself, can survive only so long as there exists the threat of an “other” for them to be strong with. And if this “other” does not exist, then, like the Jews in the 1930s or immigrants today, it has to be invented.

To put it very crudely: If Mazzini’s nation was built upon some species of love, the neo-Hegelian one was built on hate.

But history does not ever really repeat itself. The end of World War II led to the creation of a large number of international institutions ranging from the United Nations to NATO to the International Monetary Fund, from the Arab League to the Organization of American States. The most far-reaching and ambitious of them all began in 1952 as the European Coal and Steel Community, and is now the European Union. Although these institutions are very different from one another, they are all based upon international treaties; and they all attempt to solve the one problem that the Treaty of Versailles of 1919 had also attempted, but so spectacularly failed to solve: how to put an end to war.

The international institutions still have not ended that great human scourge. The source of their weakness is that they are constituted of nation-states that are defined by their sovereignty. But international agreements require nations to be bound by international law, which means sharing sovereignty with other nations. This is a difficult juggling act.

Of course, the post-1945 order worked more or less effectively for a while. The long-awaited World War III never materialized. But the order worked only so long as the threat of war these international organizations had been created to avoid remained. The collapse of the Soviet Union in the 1980s removed the presence of what had been, even before 1945, the West’s single great “other.”

After 1990, as the threat of war receded, nations began to question the wisdom of having surrendered their sovereignty to bodies over which they have no unilateral control. The new nationalism which has arisen in the past three decades, therefore, found its neo-Hegelian “other” not in other nations, but in the international institutions themselves. People at the local and national levels saw the international order’s devotion to immigration, free trade, and open borders as, above all, a danger to their “indivisible sovereignty.”

This opposition to the concept of an “international community” is what unites all the new nationalist parties of the far right—and the far left—against the European Union. Hence Hungarian president Victor Orbán’s flouting of EU law; Britain’s suicidal attempt to “take back the country;” Turkish leader Recep Tayipp Erdogan’s rejection of any attempt on the part of the “international community” to limit his authority as an affront to his country’s sovereignty; and Donald Trump’s attacks on NATO, on the EU, and on virtually all international trade agreements. All, he argues, challenge the right of what he called recently “this Great Sovereign Nation” to act unilaterally. “Internationalism”—or, as it used to be called, “cosmopolitanism”—is the new enemy at the gates in all its forms, cultural, legal, racial, political, economic.

In a sense, this always has been so. Cosmopolitans have always despised nationalists, and nationalists have always hated cosmopolitans. But whereas liberal nationalism was an attempt by the world’s Mazzinis to replace cosmopolitanism with a new vibrant international order of nation-states, the new-old neo-Hegelian nationalism seeks simply to destroy it altogether. If the cosmopolitan world we unsteadily inhabit is to survive, Hegelian logic would seem to demand that it find itself a new “other”—something which the nations of the world can only face, as they once faced the threat of perpetual conflict, as a cosmopolitan community, in which the self-consuming monster of national sovereignty would, once again, be laid to rest.