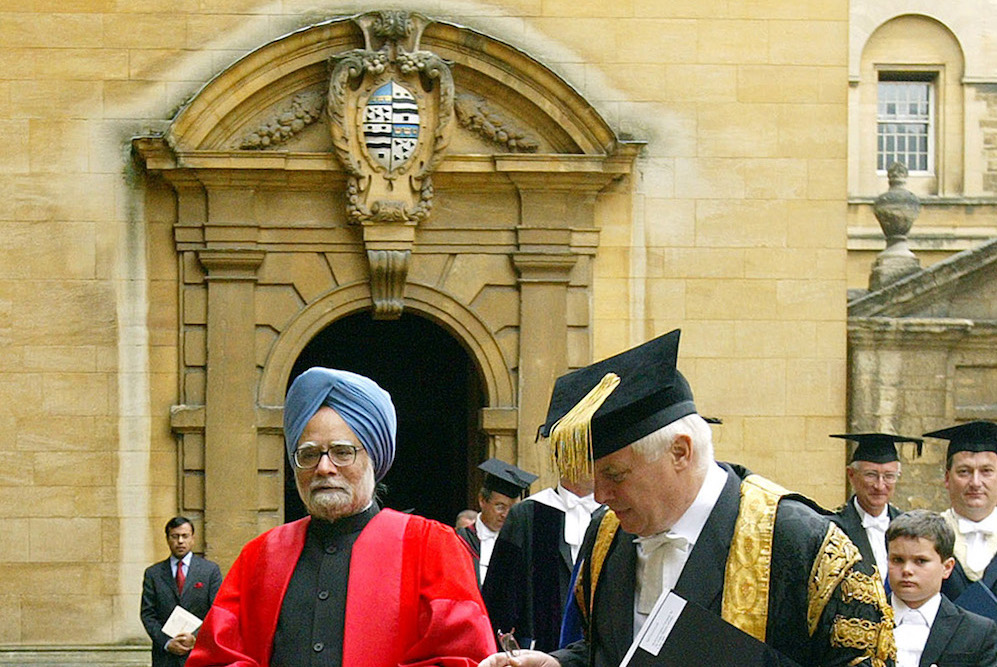 When Pakistan’s leader, Muhammad Ali Jinnah, appointed new governors for his country’s four provinces, three of his choices were Britons. He even lured Sir George Cunningham out of retirement as rector of St. Andrews University to become governor of the North-West Frontier Province; when Cunningham retired, Pakistan appointed another Scot to replace him.

Independence was not, therefore, like the end of empire in other places, with the colonialists expelled and their collaborators rounded up.

While many Britons in the 1950s and 1960s forgot about their empire or were perhaps too embarrassed to remember they had ever had one, others were keen to remind listeners that British rule had benefited Indians in numerous ways, “giving” them certain things and “teaching” them others. These “gifts” usually included cricket, liberalism, the rule of law, incipient democracy, the English language, an incorruptible civil service, and (before Partition) the unity of the subcontinent—the welding together of hundreds of little states that has enabled India to become the vast united country that it is today.

Naturally, there were many people, usually Indian nationalists and British intellectuals of the Left, who contested this view. Britain’s legacy, they claimed, was exploitation, oppression, and division. The British governed India by employing the Roman policy of divide et impera—“divide and rule.” In any case, the British rule was ephemeral and ultimately irrelevant: The future would regard it as an unimportant interlude in India’s millennial history.

No one can dispute the claim that in the 18th century the East India Company made its profits from corruption and exploitation. Nor can one deny that British soldiers were sometimes very violent, especially during the Indian Rebellion of 1857-8. A further charge against the Raj would be the mismanagement of various famines, especially the devastating one in Bengal in 1943.

Yet some of the accusations do not stand up. “Divide and rule” was never British policy; nor was the creation of Pakistan. It was the inability of Hindu and Muslim politicians to agree upon the nature of an independent India that led to Partition. As for the physical legacy, it will surely take a long time to expunge the visible traces of British rule, especially as many of its places are still used and inhabited by Indians today: the high courts, the government buildings, the splendors of New Delhi, and the wonderful examples of Gothic architecture (library, university, law courts among them) that survive in Mumbai. And then there are the railways, the focus of much British investment, which continue to knit together India’s vast economy as well as its territory.

Indians learned to use British ways and institutions to transform their lives and to create and fashion their new nations.

Still, the traditional, self-congratulatory view of Britain’s legacy to India should undoubtedly be modified today. The British did not do much to teach Indians how to practice democracy or even how to play cricket. It would be truer to say that the colonial subjects taught themselves how to imitate their colonialists. As the academic Sunil Khilnani has written, democracy was not “a gift of the departing British”; but “a concept of the state” was such a gift, and so was “the principle of representative politics.”

Indians learned to use British ways and institutions to transform their lives and to create and fashion their new nations. As the Indian sociologist André Béteille has written, the universities established by the Raj “opened new horizons both intellectually and institutionally in a society that had stood still in a conservative and hierarchical mold for centuries.” These “open and secular institutions” allowed Indians at last to question, among other things, “the age-old restrictions of gender and caste.”

As for liberalism, one could not claim that the British “taught” it to the Indians, but in the 19th century the British took certain decisions on matters of law, education and the English language which made it almost inevitable that an Indian version of it would be adopted on the subcontinent. As the historian C. A. Bayly wrote, “Britain helped liberalism take root in India by institutionalizing it through schools and colleges, newspapers and colonial law courts, and thereby converted an entire generation of Indians to a way of thinking about their own future that led to today’s Indian democracy.”

A great early leader of the Indian National Congress, Gopal Krishna Gokhale, was a liberal as a result of his education at Elphinstone College in Bombay. The views of Mohandas Gandhi owed much to British institutional influences, his years at the Inner Temple in London, his knowledge of Indian law, as well as his friendship with British liberals. Jawaharlal Nehru, a liberal both in his political sensibility and in his practice of secular democracy, had been a pupil at Harrow School and Cambridge. Nehru and his colleagues guided Indian nationalism toward that rare phenomenon, an essentially liberal revolution: not communist, not fascist, not military, not even British, but liberal in an Indian fashion.

In other fields, the legacy is clearer and also enduring, a reflection of the continuing close ties between Britain and the subcontinent. As the historian Ramachandra Guha has pointed out, “of all relations between the former colony and erstwhile empire, this one is the least acrimonious.” Both India and Pakistan adopted the imperial law codes as well as the civil service with few changes after independence. The government of Pakistan even used to boast that its own civil service was “the successor to the finest civil service in the world.”

Perhaps the wisest assessment of the legacy was made in 2005 by the then Indian prime minister, Manmohan Singh:

Today, with the balance and perspective offered by the passage of time and the benefit of hindsight, it is possible for an Indian prime minister to assert that India’s experience with Britain had its beneficial consequences too. Our notions of the rule of law, of a Constitutional government, of a free press, or a professional civil service, of modern universities and research laboratories, have all been fashioned in the crucible where an age-old civilization of India met the dominant Empire of the day. These are all elements which we still value and cherish. Our judiciary, our legal system, our bureaucracy, and our police are all great institutions, derived from British-Indian administration, and they have served our country exceedingly well.

The setting of the speech reinforced the point: Singh was speaking at Oxford University, where he had earned his doctorate in 1962.