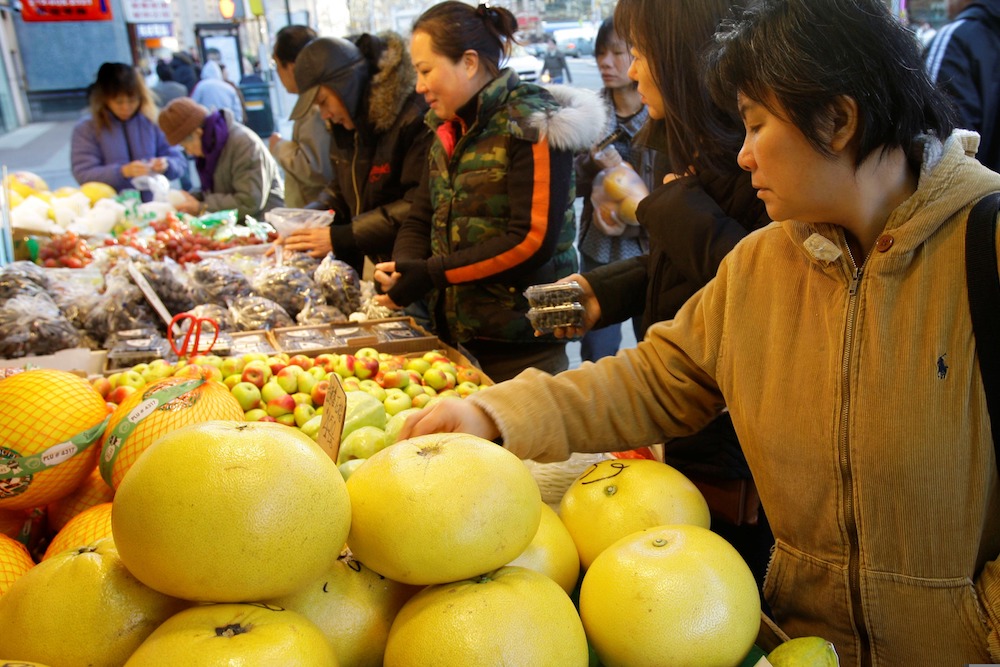 People living in close-knit immigrant communities may influence each other to avoid vices or adopt healthier lifestyles. Photo by Kathy Willens/Associated Press.

Four decades ago—around the time the Office of Management and Budget set guidelines to include questions on Hispanic ethnicity across the whole federal statistical system—researchers began noticing that Latinos seemed to live longer than other Americans. This life span was longer than “expected” given Hispanics’ average socioeconomic position in U.S. society, as individuals and groups with higher status have better health and longer survival than other folks. And so, in these early days, researchers named the phenomenon the “hispanic health paradox.”

In time, as more studies were done and the evidence piled up, the paradox also became known as the “immigrant health advantage” because it is foreign-born Latinos who exhibit some of the largest benefits. The term is also appropriate because other immigrants also exhibit advantageous health, including several other national origin groups in the United States as well as immigrants living in many European countries, Australia, and Canada.

For immigrants from Latin America, this advantage includes a reduced incidence of certain types of cancers and better cardiovascular health—which explains in large part why these folks live longer lives than other U.S. groups. However, the advantage does not extend to other aspects of health like diabetes, disability rates, or cognitive decline, where indeed Latinos and immigrants in particular spend a longer share of their lives experiencing and at least partially impaired by these ailments.

And yet, despite these problems, the fundamental paradox remains: How can newcomers to a society—especially those who are disadvantaged socioeconomically and potentially stigmatized because of being foreign-born or their legal status—live longer than native-born Americans, who certainly have greater advantages and much easier access to health care?

I’ve devoted my research to finding answers that would help us understand what makes some people healthy or unhealthy, and might even provide a recipe for better health for the whole U.S. population.

My research—and that of many other colleagues—has led us to conclude that the immigrant health advantage is both artificial and real. First, different kinds of data errors—too cumbersome for me to explain here—exaggerate it. Similarly, the advantage is a bit overblown due to the fact that immigrants returning to their countries of origin in old age are in worse health and do die younger (back in the beloved homeland) than fellow retirees staying in the U.S. (Some scholars have mused that, like salmon, people go back home and pass away in the place they originally hailed from, closing the circle of life, and called this particular phenomenon the “salmon bias.”)

These data errors and artifacts do exaggerate the positives aspects of Hispanic and immigrant health. But an advantage persists despite, and independent of, these issues.

Our research shows that the real, more substantive parts of the advantage are explained by two overlapping phenomena. First, immigrants are healthier than the average U.S. resident because—upon arrival in the country—they already possess better health than other people, better than that of both their new neighbors in the United States and the neighbors they left behind in their previous countries. These measures of better health include characteristics—most notably perhaps, very, very low smoking rates among many Latino immigrant groups—that are a good omen for their future health. Specialists in the topic call this phenomenon “the healthy migrant effect,” which they state in slightly more technical terms as declaring that migrants are “positively selected” in terms of health.

In addition to this effect, researchers have often wondered if there is anything about the immigrant experience, and how immigrants organize their lives, that is conducive to better health. It is very well-established that people in sending areas with connections to prior migrants (i.e., with a “migrant network” of relatives or acquaintances) are much more likely to migrate than folks with otherwise similar profiles but who do not possess these connections, as individuals with a migrant network receive vital information and assistance that make a move much more feasible. As a result, migrants living in the U.S. are presumably well-connected to others.

Immigrant health can be a useful and important prism to make life better for everyone.

These connections may further improve health and well-being in different ways. Research clearly suggests having strong social and emotional connections to people is very good for health. Because some migrants have tight networks and connections provide social and other kinds of support, it makes sense to suspect that the immigrant health advantage is at least partly the result of people being “protected” by something about the way they associate with and influence each other. Consistent with this notion, several studies show that Mexican Americans who live closer to each other have better health than Mexican Americans living in less concentrated areas. This suggests that living in proximity to fellow migrants could allow them to more readily access social support that might partially compensate for living in poorer neighborhoods with fewer healthy amenities like good health care options, fresh produce, or places to exercise. In addition, or alternatively, this concentration may isolate people from some negative social interactions, like experiences of discrimination, or may allow them to process or even overcome them in healthier ways than people living in less concentrated areas. Finally, it’s also possible that communities increase residents’ health because they practice some kind of social control or modeling of good behavior. If the normal behavior in your community is to not have vices like smoking, then your health may end up being protected by your environment.

One problem is that most of these studies have not been able to assess if protection exists independently. In a recent study in which I worked with Chris Jochem (now at the University of Southampton in the U.K.) and Randall Kuhn (now at UCLA), we examined the adoption of smoking among U.S. immigrants from Mexico, India, China, the Philippines, and the Dominican Republic within the first five to ten years of their arrival to the country. And we compared their experience to that of U.S.-born non-Hispanic whites and of people living in the countries these migrants came from. (Both comparisons are important to establish whether the changes observed among immigrants are truly different and specific to the immigration experience).

Overall, we found that immigrants from Mexico and China (especially men) are “positively selected” for smoking. What that means is that, when they arrived in the U.S., these folks were less likely to smoke than either the people they left behind or the people born in the U.S. of the same sex, age, and socioeconomic status.

But we also found that there was some protection at work: immigrants (especially Latin American women) were less likely to start smoking and/or more likely to quit smoking than both comparison groups even after considering their initial positive health selection. For groups like Mexican migrants, all this means that their surprising health advantage is produced by a combination of selection and protection.

But this protection and selection do not last forever: Over the long run (especially after ten years or so), the health of the foreign-born for the most part deteriorates as people spend time in the U.S. This may be due to the shock and trauma of adapting to a new society, a problem that might be increasing along with the difficulties of being an immigrant in today’s America.

Many scholars (including me) argue that the increasing deterioration of living conditions for immigrants is likely to weaken protective mechanisms. These and other factors might eventually make the immigrant health advantage wane or even disappear. Not-so-early warning signs come from studies showing a “chilling effect” in social (including health) service use among the foreign-born (and their children) in states or communities where immigrant policing and anti-immigrant sentiment is more intense. In addition to the cumulative and real effects of decreasing access to these services on health, its impacts on people’s mental health are clear and present, potentially eroding the immigrant health advantage for cardiovascular health.

Still, there are some intriguing big ideas that can be drawn from the immigrant health advantage before it goes away. If it’s a disadvantage to be born and raised here, that’s something we should try to address by changing our policies and the way Americans access health care.

More research needs to get in the weeds of how exactly close-knit interactions and communities—immigrant or otherwise—more precisely provide them with better health, which could improve policies and programs that can reproduce—and not necessarily only substitute—the effects of social support networks for all people in the US.

Unfortunately, the current political climate and debate around immigration, social policy, and health does not bode well for the design, testing, and implementation of policies aimed at even providing more and better health services, particularly to undocumented migrants, who often need them sorely. But civil society, foundations, and some government institutions (especially at local and state levels) can continue to help improve the understanding of immigrant and others’ health.

The stakes for this research and related policies are high, and might put the U.S. in less of a disadvantage relative to other “developed” nations in terms of health and wellbeing, and make it a place that is less categorically unequal. Immigrant health can be a useful and important prism to make life better for everyone.