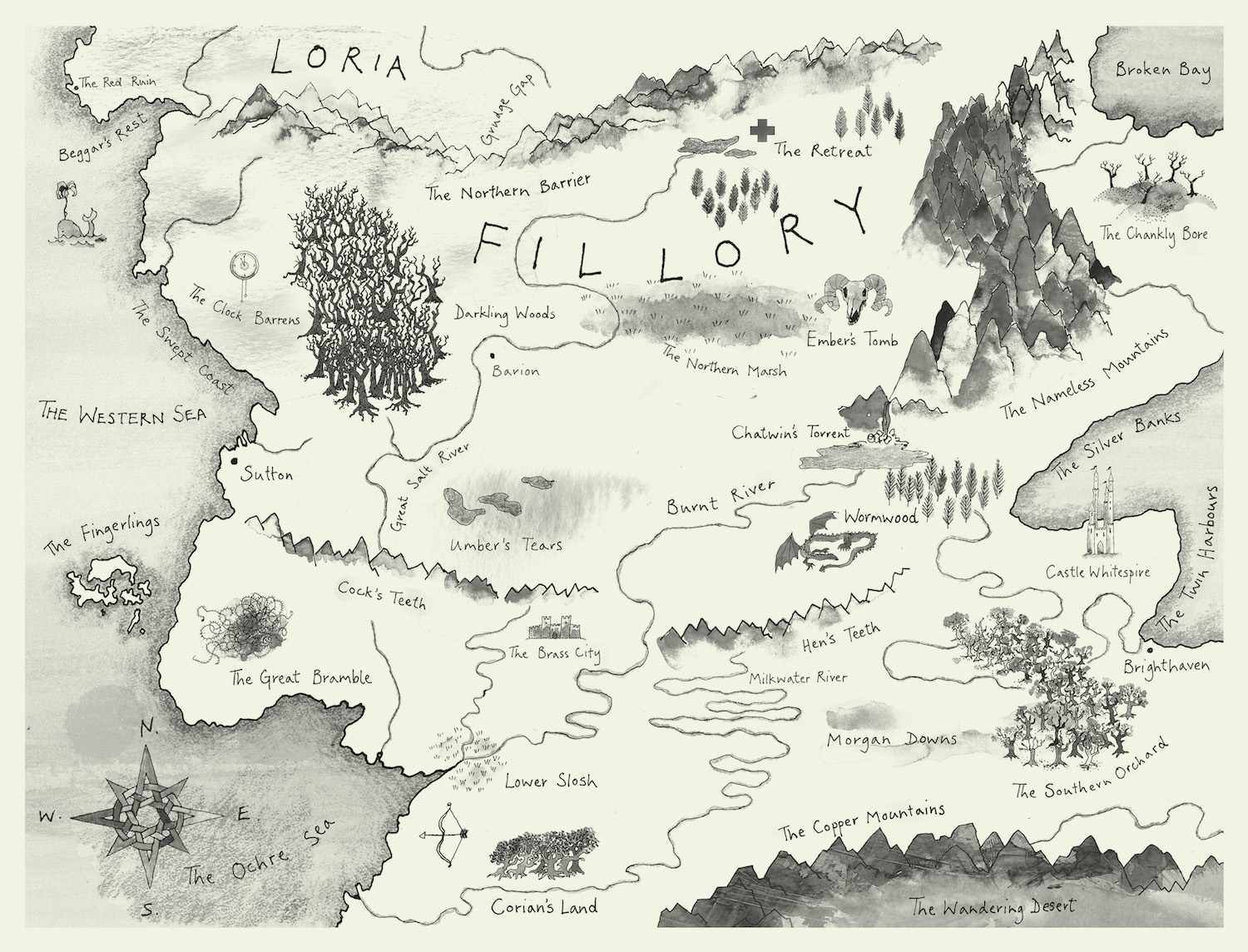 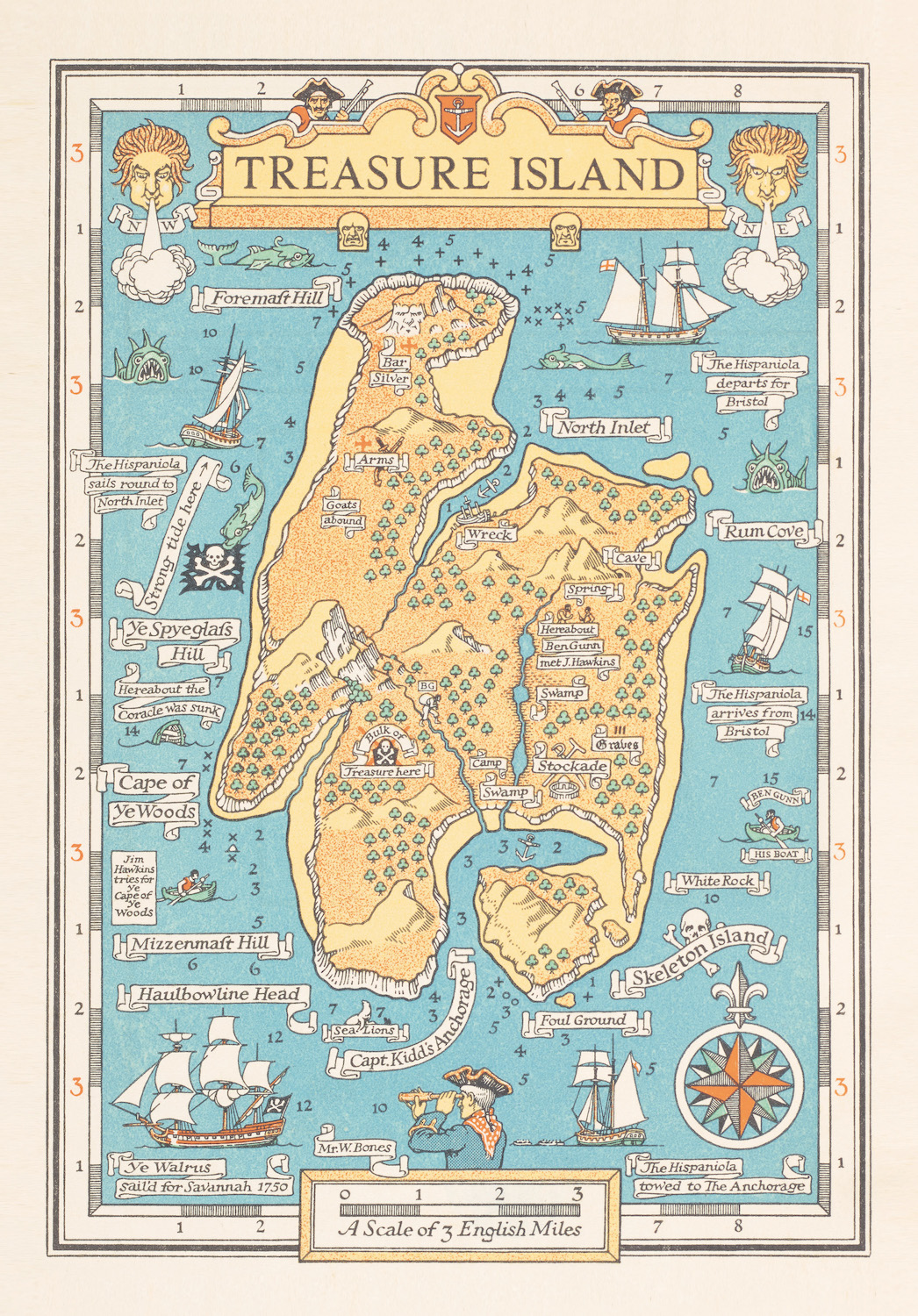 The map from Robert Louis Stevenson’s Treasure Island has been reworked and recreated many times; Munro Orr illustrated this version. Frederick Muller: London, 1934. Courtesy of the British Library, London. 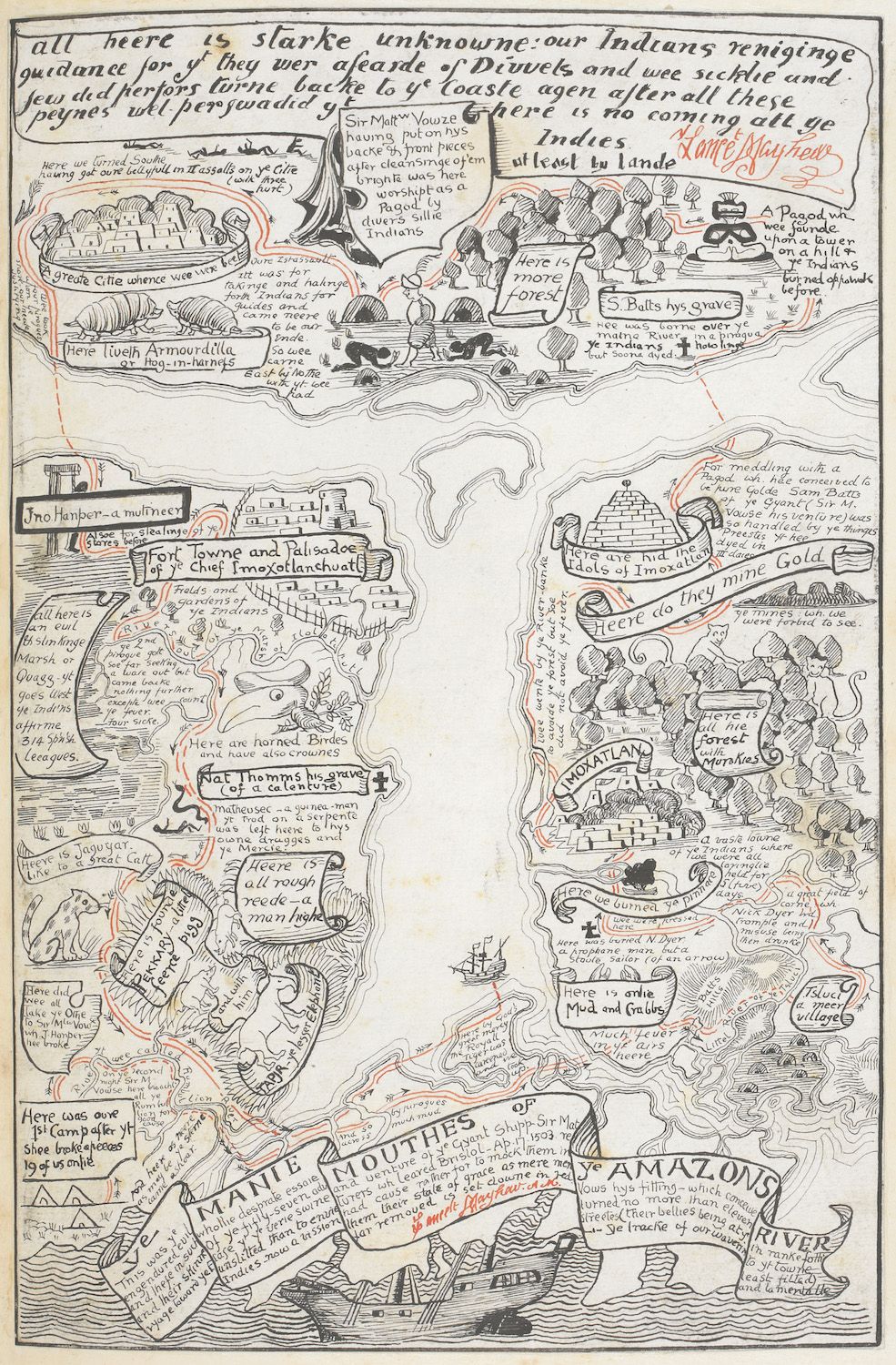 Rudyard Kipling drew this map to accompany “The Beginning of the Armadillos” in his Just So Stories. From the autograph printer’s copy of Just So Stories, 1902. Courtesy of the British Library, London. 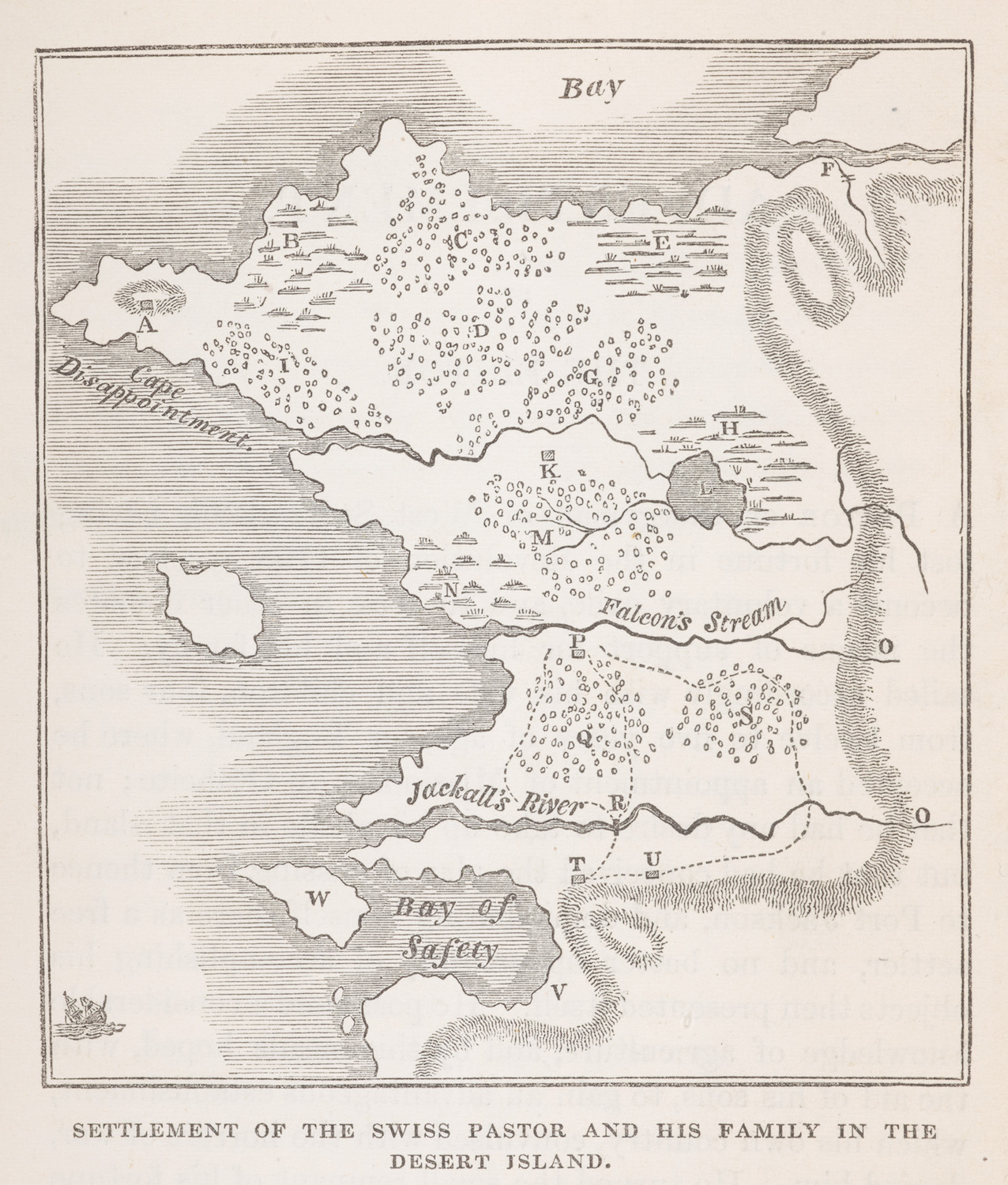 This map of the titular island lent authenticity to The Swiss Family Robinson; or, Adventures of a Father and Mother and Four Sons in a Desert Island by J.D. Wyss. Simpkin & Co.: London, 1952. Courtesy of the British Library, London. 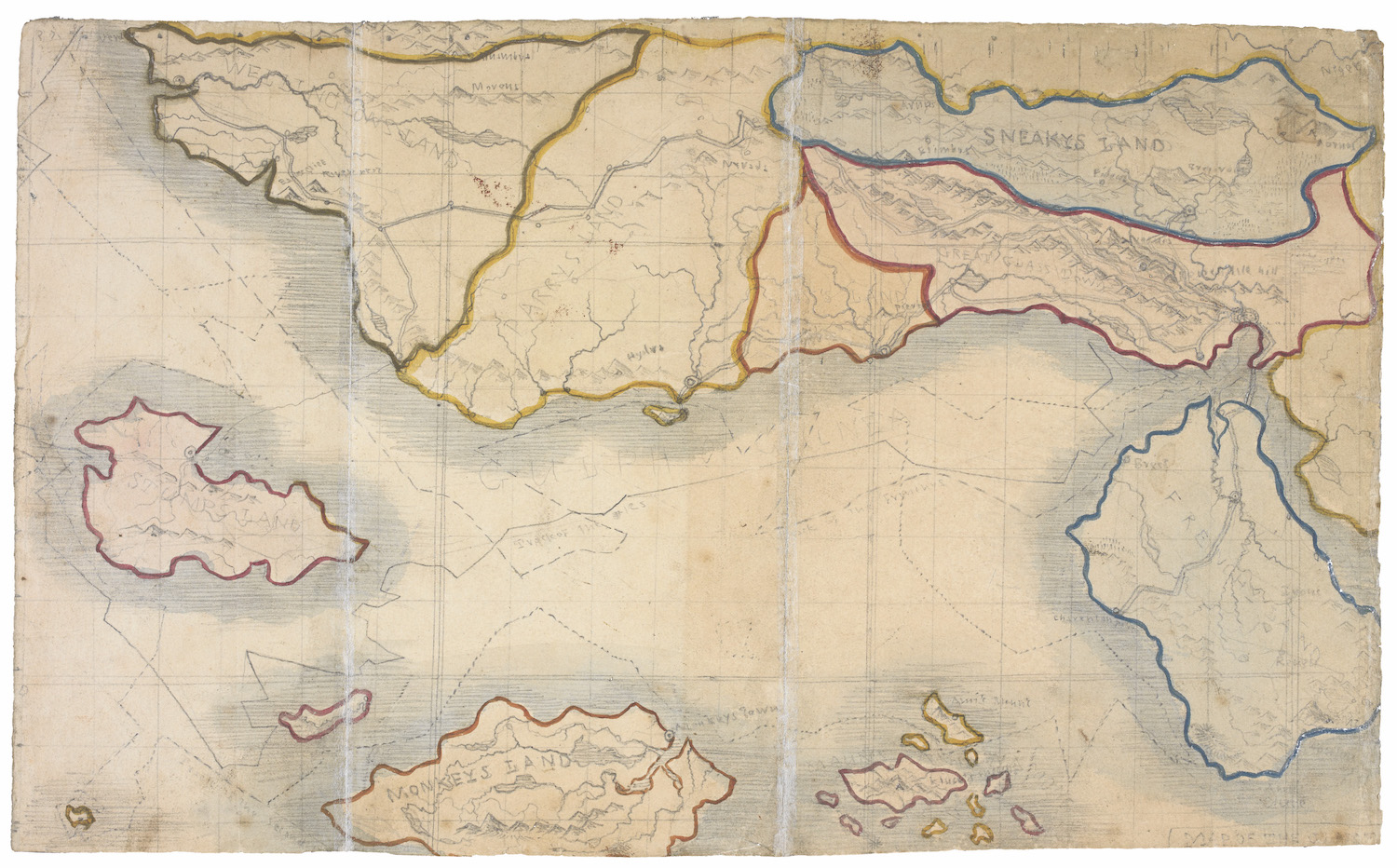 Charlotte Brontë dreamt up this imaginary land in 1826, and its map was later drawn by Branwell Brontë. From The History of the Young Men From Their First Settlement to the Present Time, 1830-1831. Courtesy of the British Library, London.

“Maps are like good books,” writes historian of exploration Huw Lewis-Jones. They “are transporting: filled with wonder, possibility, adventure. … They allow us to escape to another place whenever we might want to, or need to. Books, like maps, are filled with magic.” His illustrated volume, The Writer’s Map: An Atlas of Imaginary Lands, celebrates both cartography and fiction by collecting maps featured in or inspired by stories, as well as essays by writers and map illustrators about their work.

Many of the maps are astoundingly intricate, yet leave room for the imagination. With vastly different styles, some maps are whimsical, others feature gorgeous calligraphy, and many are witty. (Case in point: the map titled “Voyage of the Goblin Showing How She Went Across and Came Back” notes that “Her Outward Track Is Marked Only Approximately Because They Did Not Know How to Allow for the Tides and Their Steering Was Rather Uncertain.”) A number of them also give a window into the process of writing, like the map Jack Kerouac sketched for On the Road long before he wrote the novel.

The essays reveal the intimacies hidden in the maps: Charlotte Brontë’s brother Branwell, a painter, drew a map based on a land she had imagined years earlier. Treasure Island was inspired by a map Robert Louis Stevenson created to entertain his stepson. William Faulkner, though, drew his own maps of his fictional Yoknapatawpha County.