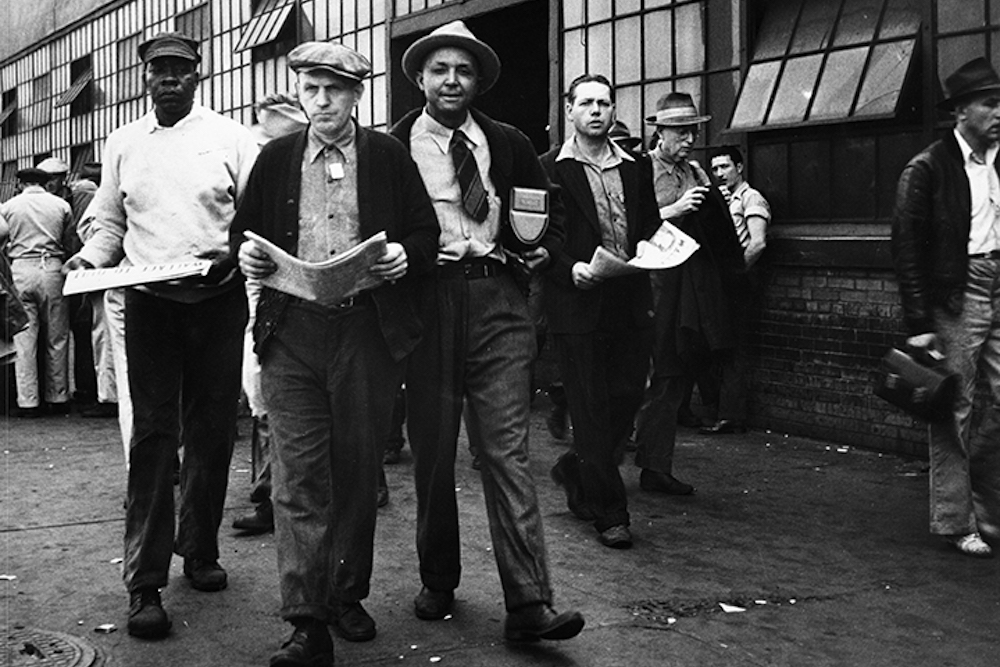 In the popular as well as the political imagination, the 1950s were a golden age for American industrial workers, especially for the hundreds of thousands who toiled in Detroit’s auto factories. The story holds that lucrative contracts negotiated by the United Automobile Workers resulted in rising wages and improved benefits like pensions and health care. A blue-collar elite emerged: primarily white male, industrial wage earners who stepped up into America’s middle class and bought homes in the suburbs, eagerly purchased new cars, owned cabins “up north” in Michigan, and sent their children to college.

But as a historian of Detroit’s autoworkers, I’ve come to realize that no one back then saw things that way. All but the most stubborn local boosters recognized that the auto industry was always volatile, and that auto work was always precarious. Throughout most of the 1950s, the big three automakers mostly earned hefty profits—but autoworkers themselves suffered from layoffs and insecurity beneath those numbers. The post-World War II boom that is central to our understanding of 20th-century American history, not to mention the autoworkers who are said to have led that boom, must all be reconsidered. Reality, in fact, directly challenges the existence of what is commonly thought to have been a golden age for American industrial workers at the heart of America’s postwar boom.

The auto industry’s instability started in the immediate aftermath of World War II, when materials shortages bedeviled the business. As the nation converted from wartime back to civilian production, there was huge demand for steel. Automakers stood in line with railroads, stove and refrigerator manufacturers, and many others for limited supplies. Strikes in the coal, steel, copper, and glass industries, whose workers struggled to keep pace with postwar inflation, further limited supplies, shutting down auto factories for weeks and sometimes months. With thousands of parts going into each car, any missing items—from seat frames to bolts and screws—could quickly result in tens of thousands of auto layoffs in Detroit. Official strikes and unauthorized “wildcat” walkouts in Detroit’s auto plants, for reasons ranging from overbearing foremen, to poor ventilation, to removing bathroom stall doors, also caused widespread unemployment.

These interruptions remained a fixture of the industry, and they explain, in part, how the false idea of Detroit as a kind of worker’s paradise took root. Historians have assumed, as did many economists in the 1950s, that annual earnings for autoworkers could be calculated closely enough by multiplying the hourly wage by a 40-hour week, 50 weeks a year. In reality, layoffs continued to be so common that there was little correlation between hourly earnings and monthly or annual incomes. Macroeconomic data can be a poor indicator of how ordinary workers are faring; hourly wage rates meant nothing to people who were out of work.

The auto industry in the 1950s was a boom-and-bust industry, and every good phase for workers—1950, 1953, 1955—was followed by a tough stretch that wiped out whatever precarious toehold they had established.

Consider how workers fared in 1950, which was generally a good year for the auto industry, with aggregate production and sales setting new records. But when the Korean War began in June, the business took a severe hit. Unlike during World War II, when Detroit became known as “the arsenal of democracy,” defense spending during the Korean War spread throughout the country to places like New Jersey, Ohio, Missouri, and California—while metals rationing strictly limited the number of cars that could be built in Detroit.

Prospective workers, however, streamed into Detroit from around the country because they heard only about industry profits, never about the problems. As a result, unemployment in Detroit was rarely under 100,000 people throughout the Korea conflict. Sometimes it reached as high as 250,000 job seekers, heavily concentrated among autoworkers.

The standard script for thinking about postwar autoworkers emphasizes the significance of contracts signed in 1950 between the UAW and automakers, especially General Motors, that provided for standard wage increases, cost of living allowances, additional wage increases to account for productivity gains, pensions, and improved health insurance. These contracts have been portrayed as the main force propelling autoworkers into the middle class, providing secure, rising incomes, and benefits equivalent to or better than those enjoyed by many white-collar employees in other industries.

But that scenario only makes sense if autoworkers’ lived experiences conformed to the contracts’ terms—which is not what happened. Consider that in early 1951, automakers and UAW leaders co-signed a leaflet, distributed far and wide, that warned: “Attention would-be war workers! Stay away from Detroit unless you have definite promise of a job in this city. If you expect a good-paying job in one of the big auto plants at this time, you’re doomed to disappointment and hardship.” By January 1952, 10 percent of all unemployment in the nation was concentrated in Detroit.

The auto industry boomed anew in late 1952 and early 1953, as the war wound down and metals rationing ended, and auto employment also skyrocketed, with tens of thousands of new workers—perhaps more than 100,000—again migrating to Detroit for work in factories.

At this time, because of demand for autos, discriminatory barriers temporarily diminished, as automakers, desperate to run three shifts, relented and hired more African-American men, white women, and people with disabilities—a significant population given recent wars and the dangerous conditions in factories.

But these new hires were not insulated from the industry’s volatility. In late 1953, the U.S. entered another recession, triggered by a lack of demand for American goods, and layoffs returned. Independent automakers such as Hudson Motor Car Company, Packard Motor Car Company, and the Kaiser-Frazer Corporation—which had once collectively employed many more Detroit autoworkers than General Motors—merged with Nash Motors Company, Studebaker, and Willys-Overland Motors, respectively, and moved remaining production out of the Motor City to Kenosha, Wisconsin; South Bend, Indiana; and Toledo, Ohio.

Detroit officials hoped that those who had come to the city when the industry had needed them would now return to their homes, whether Arkansas, Kentucky, Alabama, or northern Michigan. Some did, but most had come to consider themselves autoworkers and Detroiters, and hoped to be recalled to factories. Many people were laid off for several months, some for as long as a year.

Even in 1955, the year that best supports the golden age thesis, the cycle of layoffs repeated itself again. Brought back to life by resurgent demand for automobiles after the 1953-54 recession, factories buzzed with activity and steady employment, churning out over 9 million vehicles. The upsurge pushed auto employment to record postwar levels, but it also masked long-term, structural job losses due to automation, which replaced workers with machines.

Hoping that the good times would last, many autoworkers bought houses, rented larger apartments, bought cars, furniture, and appliances, and paid off debts. Given the history of the industry, these were risky investments. As a labor beat writer for the Detroit Free Press noted, “Anyone who has been around the State for the past few years knows full well that sooner or later the bottom is going to drop out of the job market again.” Sure enough, demand for vehicles in 1955 did not keep pace with production, and at year’s end almost a million cars sat unsold on dealers’ lots across the country. Auto production once again scaled back accordingly, with tens of thousands of layoffs, many of which became permanent.

Autoworkers fell behind on installment plans, resulting in repossessions of their purchases, and they found it impossible to keep up with mortgages and rents. Most autoworkers, and especially those with families, were priced out of the market for the new cars that they built—even though they were ostensibly among the highest paid industrial workers in the country. Adding insult to injury, business leaders blamed autoworkers for the industry’s woes, arguing that high wages had limited consumer demand by inflating the price of vehicles.

Detroit never really got in sync with the nation’s prosperity during the 1950s. According to the U.S. Department of Commerce, 1957 outdistanced 1956 to become America’s “best year ever.” But that time in Detroit was marked, according to the Michigan Employment Security Commission, by “continuing serious unemployment, high payment of jobless benefits and concurrent reduction of manufacturing employment to the lowest point since 1949.”

Conditions worsened, both nationally and locally, when the 1958 recession devastated Detroit’s autoworkers and their neighborhoods. Over a quarter of a million Detroiters, mostly autoworkers and those whose jobs were supported by their income, were out of work in early 1958, and unemployment remained at least that high, and often worse, for well over a year. MESC Director Max Horton remarked that if he were one of the long-term unemployed autoworkers, he “would start seeking a job in some other line of work.”

But regardless of that advice, many autoworkers ended up having no choice. The auto industry in the 1950s was a boom-and-bust industry, and every good phase for workers—1950, 1953, 1955—was followed by a tough stretch that wiped out whatever precarious toehold they had established.

Things didn’t get much better in the 1960s: although the number of jobs increased, so did turnover. By the late ‘60s unemployment benefits had increased, softening the blow of being out of work, but that did not prepare workers or industry for the oil crisis of 1973 and 1979 and increased competition from foreign manufacturers. Job stability became an impossible dream for blue-collar workers.

So why do we continue to imagine that the 1950s were the heyday of the auto worker? In hindsight it’s clear that historians have romanticized the era for their own reasons. As current income inequality has grown, labor historians have painted the ‘50s as the decade when workers had a fairer share of the economic pie and union contracts gave them power that they now lack. Business historians, on the other hand, have used the same era either as a supposed counterpoint to the more austere post-1973 economy or to argue that excessive workers’ power, along with high wages, killed the profitability of the auto industry. None of these arguments, in my opinion, reflect the reality for workers in Detroit of the time.