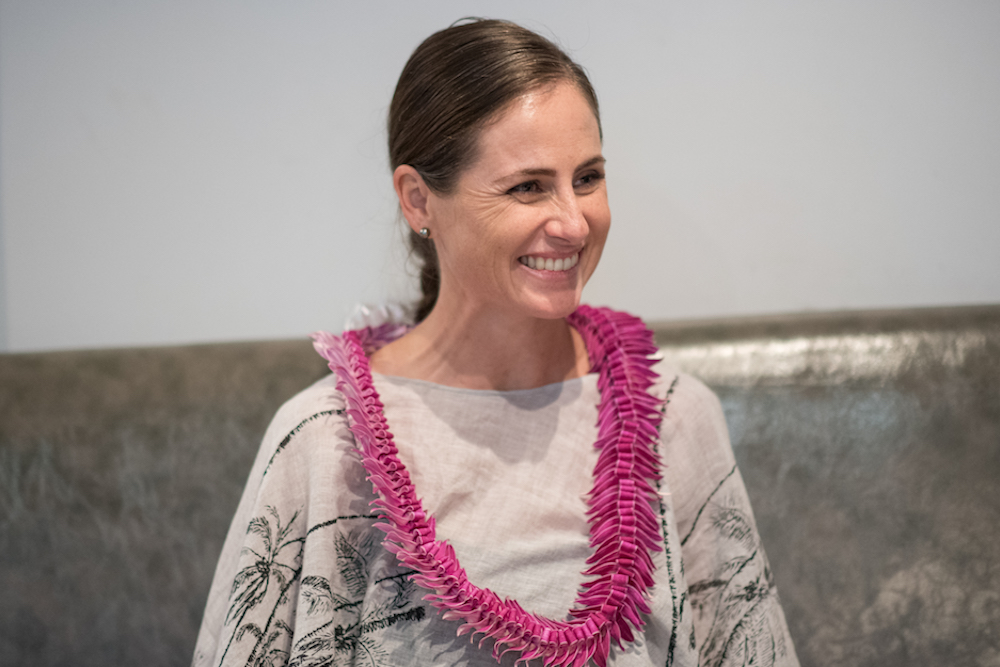 Katie Drager is a sociolinguistics professor at the University of Hawai‘i at Mānoa and co-director of the Charlene Sato Center for Pidgin, Creole, and Dialect Studies. She researches language varieties in Hawai‘i and New Zealand, and the ways in which social information and linguistic information are linked in the mind. Prior to taking part in the Zócalo/Daniel K. Inouye Institute “Talk Story” event titled “Will Pidgin Survive the 21st Century?,” which took place at Artistry Honolulu in Honolulu, Hawai‘i, Drager sat down in the green room and shared her thoughts about the ocean, the kupukupu plant, and her favorite phrase in Hawaiian pidgin.

I think it would probably have to do with methodology, so questions probably about statistics. What models to run and how to do statistical analysis. Probably not the funnest answer, but I think that’s the truth.

Where would we find you at 10 a.m. on a typical Saturday?

At home with my kids, or at the beach, with family.

What do you think is the biggest misconception people have about Hawai‘i?

People from outside of Hawai‘i? Gosh, there are a few. I think there is a lot of misunderstanding of Hawaiian culture. A lot of appropriation happens. I’d say that’s the biggest and one of the more important misconceptions.

Do you have a favorite pidgin phrase?

Yeah, I do. I really like this one because it maps onto Hawaiian really nicely. If you say “Ono ka laulau” in pidgin, it’s “Ono da laulau” in Hawaiian. So the only thing that changes is the “ka” to the “da,” and suddenly, it’s Hawaiian. I like those kinds of sentences where you can really see the connection between those two languages.

And what does that phrase mean?

“Laulau is delicious.” Have you had laulau [meat or fish wrapped and cooked in leaves]? You have to try it. I’m a vegetarian, I eat the vegetarian laulau; they’re really good. I can recommend them.

Where do you take out-of-town guests when they come to Hawai‘i?

If you didn’t live in Hawai‘i, where would you live?

The one that’s coming to mind right now is kupukupu. It’s a native Hawaiian fern, and it’s really important in hula. I just like how it looks, too.

What is your greatest extravagance?