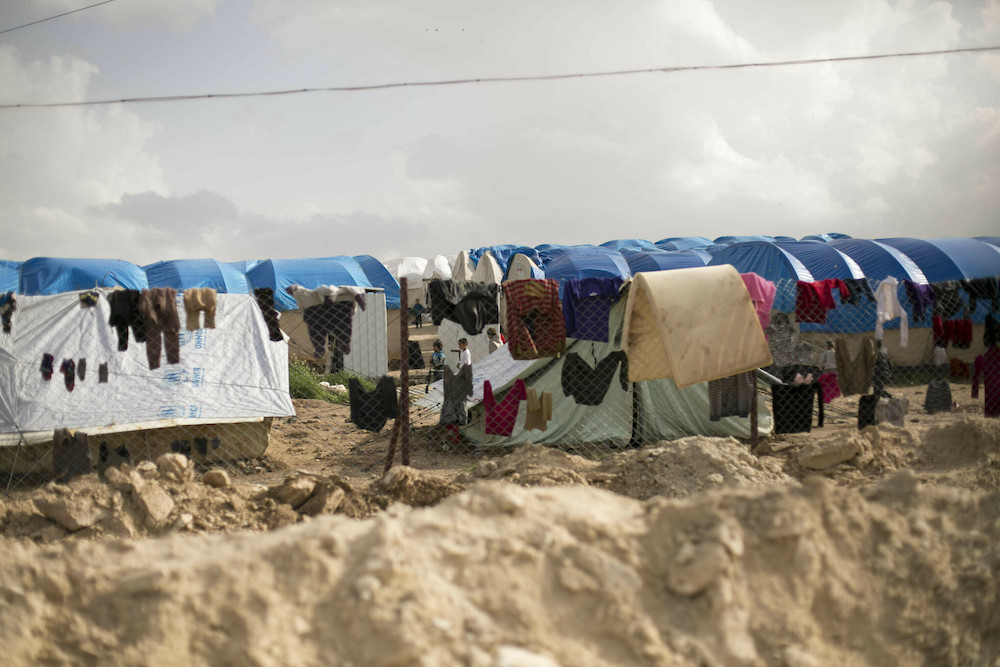 Laundry drying on a chain link fence in an area for foreign families, at al-Hol camp in Hasakeh province, Syria. The al-Hol camp is home to tens of thousands of wives and children of Islamic State group fighters. Courtesy of Maya Alleruzzo/Associated Press.

Accounts of two young girls, both named Amira, have dominated the 2020 news cycle out of Syria.

One girl, a 3-year-old Australian, has been in the Kurdish-run refugee camp al-Hol and was about to lose her fingers to frostbite because of the lack of heating and infrastructure at the camp. The other Amira, a Canadian, was discovered last year walking through the rubble of Baghouz after both her parents were killed in the aerial bombardment that heralded the end of ISIS’s territorial control. This Amira was also held at the al-Hol camp until international pressure forced the Kurdish authorities to move her to a safer location.

These parallel cases have ignited new debates about what to do with children from war zones, who now find themselves without country, citizenship, protection—or much compassion. The countries from which ISIS children originate are confronted with a grave humanitarian crisis. Leaving children to languish and die in refugee camps and prisons is an unconscionable abuse of human rights. The longer the children remain, the more they could be exposed to trauma and deprivation, and now, even face the threat of an outbreak of the novel coronavirus, all factors compounding the problems of their eventual adjustment. Furthermore, there is concern that children enduring harsh conditions of refugee camps will be even more vulnerable to radicalization in the future.

These children had little or no say in whether their parents took them to ISIS territory in Syria and Iraq. Governments debating whether to allow those children to return must understand what they experienced as a first step to reintegrating them into society. What were the children coerced to do while they were the so-called “Ashbal al Khilafah” or ISIS “cubs,” the name given to them by the terrorist group? What did they witness as observers of ISIS war crimes? And what might have been done to the children themselves? ISIS would not be the first violent extremist organization whose members sexually abused children they recruited.

Given that ISIS indoctrination in many cases started at very young age, the children have to unlearn the distortions of the Islamic faith and re-learn basic life skills. They also should participate in vocational training to facilitate their transition to everyday life. This transition requires a long-term process, longer than the standard three-month rehabilitation program that exists in the Kurdish camps where so many ISIS children go.

The historical context of children in violent extremist groups is complicated. The numbers of such children mostly declined in the two decades following the 1996 publication of the United Nations’ Machel report, which described the impact of armed conflict on children. But in more recent years, groups that once avoided using children on the front lines began to revive the tactic in new ways, with children as car bombers and executioners.

ISIS heralded its exploitation of children. In ISIS propaganda, children were featured giving their “about to die” eulogies; ISIS also distributed propaganda videos of executions carried out by boys as young as 10. ISIS’s tactics led to an urgent call by Western governments and security agencies for increased efforts to prevent radicalization and violent extremism across the globe. But so far, there is little empirical evidence for effective prevention of such radicalization and violence around children. Prevention is challenging because armed groups employ so many various methods of indoctrination for children, and use children in so many different roles in conflict. ISIS’s approach to educating children demonstrates the breadth of the challenge.

By 2014, ISIS had assumed de facto control over schools in the areas under its control in Syria, which had been in chaos since its civil war began in 2011. The chaos came to the classrooms. Female teachers were dismissed immediately from all of their duties. While many male teachers remained in their positions, they were forced to teach an ISIS-controlled curriculum to gender-segregated pupils. These lessons included weapons training and intense ideological conditioning in which every element of education was imbued with military imagery to routinize violence. The mathematics textbooks had the students counting bullets and tanks, and students learned to tell time with clocks fastened to bundles of dynamite.

The schools provided ISIS recruiters with the opportunity to scout for talent or specific traits. For example, children with an aptitude for communication were deployed as recruiters themselves, adopting public-speaking roles to conscript other children, as well as adults, on the Dawa caravan. The goal of child recruiters was to engender a sense of pride, prestige and competition among what ISIS referred to as the “cubs of the caliphate” to increase their status. Students earned this “cub” status in one of the dedicated training camps where they learned the military, tactical, and combat skills needed to become a militant.

The evidence of how children were brain washed is chilling. Between May and July 2015, ISIS released three videos featuring children aged between 10 and 15 years old. A video from February 2015 showed 80 children—some as young as 5—wearing camouflage, standing in formation and engaging in military exercises with guns. They were taught how to behead people and use AK-47s. Clearly, ISIS pioneered a form of individual resilience by combining intense physical and military training with deep levels of ideological and psychological indoctrination. The group designed a systematic process of education, religious indoctrination, and physical training to generate competent militants who were not just mindless drones, but who embraced every aspect of its teachings.

Many people have argued that ISIS’s exploitation of children is no different than the past creation of child soldiers in Liberia, Sierra Leone and Darfur. Yet ISIS’s strategic use of child recruits is very different than the way child soldiers in African were employed. On that continent, such children were recruited throughout the 1980s and ’90s not for the future, but for the immediate exigencies. Most of the children fighting in African militias were killed in battle and few survived to progress through the ranks to become leaders.

This difference between the ISIS approach and the African example has important implications for the rehabilitation of former child soldiers. What may have worked for several Disarmament, Demobilization, and Reintegration (DDR) programs in Africa—trying to transform children’s roles with the aid of family, community, educational and religious authorities—may not work as seamlessly in Syria and Iraq, where the religious and education institutions were thoroughly co-opted, controlled, and distorted by ISIS’s control from 2014 to 2018. As a result of post-traumatic stress disorder, these children will likely lack empathy, suffer from attachment problems, and struggle with socialization.

Given that ISIS indoctrination in many cases started at very young age, the children have to unlearn their knowledge of the Islamic faith that was profoundly distorted by ISIS and re-learn basic life skills. They also should participate in vocational training to facilitate their transition to everyday life. This transition requires a long-term process, longer than the standard three-month rehabilitation program that exists in the Kurdish camps where so many ISIS children go.

If Western countries, human rights organizations, and civil society are to have any hope of reintegrating the children who survived being used by ISIS, there must be a level of coordination and creativity not previously employed in any DDR program. Demobilization of the children demands a multi-pronged approach that combines vocational training, psychological intervention, and religious reeducation to address the trauma suffered by witnessing executions and participating in acts of violence. Normalization will be all the more challenging if members of their own families encouraged or exposed them to violence.

In Pakistan, there exist successful programs to treat children who were members of violent extremist organizations (for example, the Pakistani Taliban TTP). The child’s family is expected to play a positive role in their reintegration. However, in the case of ISIS, the families who encouraged and exposed the children to the violence in the first place are less than ideal. To prevent recidivism or re-engagement, the children might have to be separated from their family members. That is far from standard practice, but there is little that is standard about the challenges of reintegrating children of ISIS fighters.

Mia Bloom’s research is supported in part by the Office of Naval Research “Documenting the Virtual Caliphate” #N00014-16-1-3174. All opinions are exclusively those of the authors and do not represent the Department of Defense or the Navy.