I used to live on 8 acres at the end of half a mile of private dirt road in the Santa Monica Mountains outside of Los Angeles. It wasn’t particularly isolated; about a dozen families lived along the narrow one-lane road that ran alongside a little creek. Many of us had dogs.

Because it was a private road (named Paradise Lane, of all things) we were able to informally agree to forego the leash laws and allow our dogs to run free. Our three-house property was home to three families and five dogs. There were about a half a dozen other dogs scattered along the lane, and all were free to come and go as they pleased, even though, most of the time, they stayed close to their own homes and humans. These dozen or so dogs self-organized into a set of about four packs with surprisingly rigid boundaries and identities. 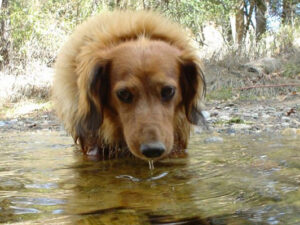 Flora drinks from the creek. Courtesy of Nesdon Booth.

All of the dogs we had in these days, as well as the ones we knew from our neighbors, tended to be extremely healthy and long lived, most of them surpassing 20 years of age. In those years, before the drought, they were also able to drink freely from the creek, leading some of our friends, who envied the longevity of our dogs, to claim that the creek was a canine fountain of youth, and call our little valley Dog Heaven, as it probably was.

Ever since I moved away from that valley, I haven’t really been able to abide the thought of the life a dog might have in a house or apartment. After my sister, who lived and then died in one of the houses on our property, was gone, I took one of her dogs, a huge powerful Akita mix, to live with me in a shared house in Berkeley. He was not as lonely as most urban dogs might be, but still, I had to sometimes leave him home alone, where he would become anxious and chew adorable little round holes all over my bedding. Knowing the life he had had on Paradise, despite the great comfort he was to me during my grieving, I could not bear to keep him away from that life, and so returned him to live out his days in joy in dog heaven on Paradise Lane.

I have misgivings about how pets, especially well-trained ones, are essentially enslaved by their human masters. I have had dogs all my life and find enormous comfort in their company. They are so eager and willing to be with us it used to feel as if we were not really violating their sovereignty when we collar, leash, and confine them. My experience living in the Santa Monica mountains with dogs who were able to live so freely and closer to the way humans and dogs may have lived together, without fences or leashes, for the thousands of years that we co-evolved to develop the special bond we share, changed the way I feel about owning a pet. Dogs are, in fact, sovereign beings, with their own needs and desires, and some right to live their lives on their own terms. I do not now have a dog, despite having a little granddaughter whom I would so love to expose to the ecstatic and overwhelming love of a puppy, something that was one of the greatest joys of my childhood. I’m not completely tainted by the knowledge of how divine a dog’s life might be, even as a pet, and may yet rescue a puppy to live here with us in our suburban backyard. But neither am I as cavalier as I once was about dominating the life of a dog.